This is so much cooler than MS Paint.

It seems like every six months or so I discover an MIT video that leaves me in awe. This time, it is the I/O Brush:

[I just realized that Laura blogged this almost two years ago! Where have I been?]

The I/O Brush is a project by Kimiko Ryokai in the Tangible Media Group at the Media Lab. Her site describes the invention:

I/O Brush is a new drawing tool to explore colors, textures, and movements found in everyday materials by “picking up” and drawing with them. I/O Brush looks like a regular physical paintbrush but has a small video camera with lights and touch sensors embedded inside. Outside of the drawing canvas, the brush can pick up color, texture, and movement of a brushed surface. On the canvas, artists can draw with the special “ink” they just picked up from their immediate environment.

There are many paint/drawing programs on the market today that are designed especially for kids. These let kids do neat things, but kids usually end up playing only with the “preprogrammed” digital palette the software provides. The idea of I/O Brush is to let the kids build their own ink. They can take any colors, textures, and movements they want to experiment with from their own environment and paint with their personal and unique ink. Kids are not only exploring through construction of their personal art project, but they are also exploring through construction of their own tools (i.e., the palette/ink) to build their art project with.

The BBC also did a story on I/O Brush:

The MIT researcher took the brush into a local classroom for about five weeks to see how children reacted to it.

“I didn’t tell them to run around the classroom and look for colours,” she says, “they did it spontaneously.”

“One kid would say ‘Hmm, I need that colour’ and other kids would suggest ideas for sources for the colour.” 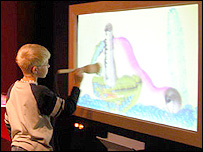 Ryokai is critical of typical painting programmes created for children.

“A lot of the time kids only end up playing with the clip art that comes with the software, and picking colours only from the computer’s palette” she says.

By contrast, the I/O Brush “pushes kids to look around, and explore and investigate the richness of colours that surround us”.

She found that pictures contained many personal objects and provoked story-telling about the images, such as where the colour came from, where they got it and what it was about.

“A brown wasn’t just a brown, but a brown that came from their favourite teddy bear or friend’s hair,” she says.

In one exercise they were shown a Matisse painting and were asked where the blue colour might have come from.

“Kids who played with the I/O Brush would say oceans, Jacob’s jacket, a lunchbox or someone’s pants,” she says .

“The blue wasn’t just this abstract blue but was blue from a personal object or from their environment.”

I previously blogged two other awesome projects/videos, <http://web.media.mit.edu/~hayes/topobo/>Topobo and ASSIST. I’m not sure which of these three I’d want first!

19 responses to “The ‘Magic Paint Brush’”