The middle days of the week by Jessie L. '07

This entry chronicles interesting things I did on the middle three days of the week: Tuesday, Wednesday and Thursday.

On Tuesday, I went on a service project with APO. APO is “a national coed service fraternity” with service projects and fellowship events. At MIT, among other achievements, it is responsible for the Book Exchange, the Ride Board, and the Big Screw charity fundraiser. For some reason, MIT’s chapter has drawn mostly from the East Campus dorms and the ILG Epsilon Theta. People in the chapter always angst about this and try to figure out why and what to do about it. I suspect it’s because we mostly get new members by telling our friends that they should join.

This service project was at the National Braille Press in Boston. We started with a tour of the building. In the basement, there were huge stacks of paper, though apparently there were a lot more stacks of paper when they were printing Harry Potter and the Half-Blood Prince. 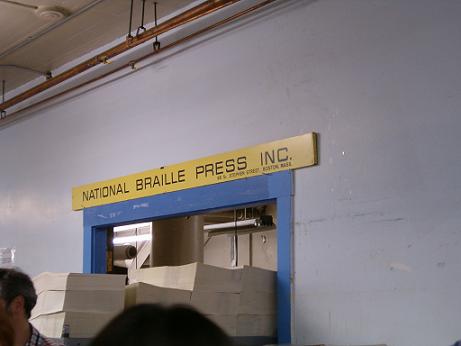 We also got to see the printing presses. I bet most people have never seen a braille printing press before. I seem to have been unable to take non-blurry pictures. 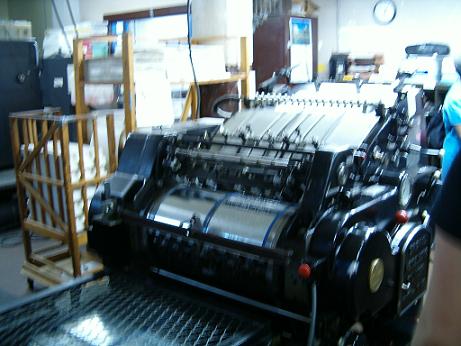 We were helping put together a run of the Dr. Seuss book Mr. Brown Can Moo, for NBP’s braille literacy program for blind children. The sheets of braille were already printed on transparent stickers. We had to take copies of the books, remove the backing of the stickers, and put the stickers on, assembly-line style, with each person doing a page. 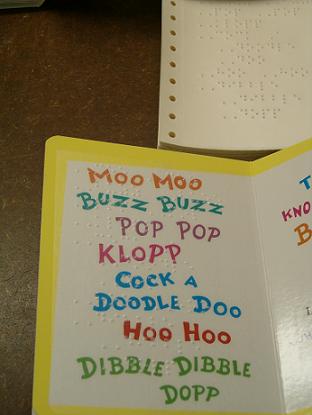 We got a break where we ate pizza upstairs. Mandie ’08 (my Little from last term!) and Natan ’06 enjoy the break: 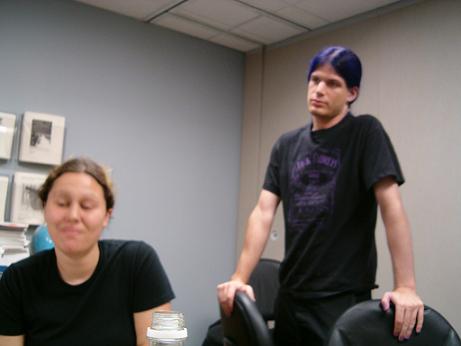 Mandie is checking books with Mitch ’03: 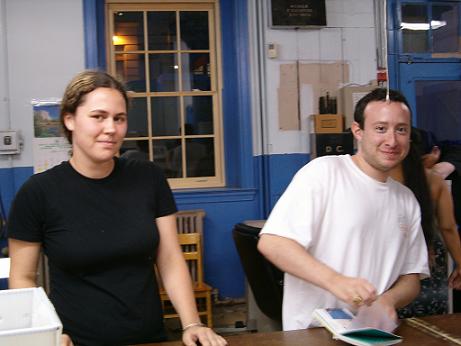 After we left NBP, we went to J.P. Licks and got ice cream. 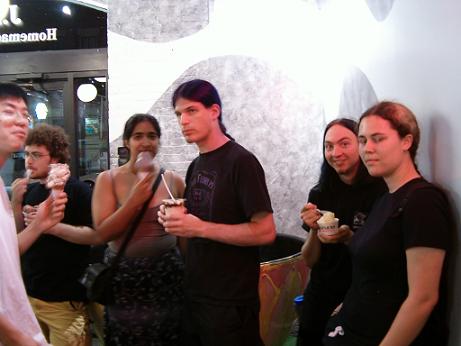 On Wednesday night, I went with a large group of friends to Manray, self-described “home of the Boston underground”, for its final goth night before it leaves its long-time Central Square location forever. You don’t really have to be a goth to go to goth night, you just need to look like one for the night.

Before the first time I went to Manray goth night (or “Crypt” as it’s officially called), I had attempted to dance twice, not counting flailing around to music in the living room when I was five. Once at prom, once at a dance at a band competition in middle school. Manray was the first place I ever really danced (and, other than on the 1st East Disco Dance Floor, still really the only place). Though I can’t see myself, I’m sure I’m not very good, but I don’t care because at Manray, despite the large numbers of good dancers, there’s always someone worse than you, and nobody’s critiquing anyway. I discovered that when I was stressed, a night dancing at Manray was a great release.

Sadly, you’re not supposed to bring cameras in, so I couldn’t take pictures. The walls are black with murals of things like fire and angels. There are blacklights everywhere, and a dance floor, and a stage. Most of the people are dressed in black, though some go all-white, and one guy there was wearing a Star Wars storm trooper costume, and they run the gamut of gothiness, from Victorian goths to Matrix-esque goths to kinky goths to nerdy goths. I dressed similar to what I often do in normal life, a sort of androgynous effect, with a black t-shirt, black BDU pants, and black combat boots, and with my hair pulled back. In the winter I add my trench coat to that getup.

I had a lot of fun. Frequently, when I go, somebody in my group impresses me with dancing skill that I hadn’t known they had. This time, said person was Alex ’05. Nice job, Alex, on the off-chance that you’re reading this. There were tons of MIT people there, and not just in our mob. I recognized people from 5th East, Random Hall, Senior Haus, Epsilon Theta, and Fenway House, which covers most of what I’d expect (though I’d have expected 1st East as well). I went on the stage to dance three times. I forget what the first time was for. The second time was when Queen’s wonderful song “Under Pressure” came on, and the third, near the end, was for the more traditionally gothy Cruxshadows’ “Marilyn, my Bitterness”, which is a great song to sing along and dance to because the chorus repeats about a million times at the end.

Too bad Manray’s leaving. I hope the new club is nearby.

On Thursday, I came home from work to find Vogt ’06 and Harvey ’06 grilling hot dogs to raise money for the Big Jimmy Scholarship Fund. Big Jimmy was a security guard at East Campus and Senior Haus for many years. He was very close to the students, and loved to sit around and gossip with them (the joke was that he knew who you were dating before you did). He knew the students personally, and they confided in him, and he checked up on them. He was frequently the one to notice if someone was drinking alone in their room, or dangerously depressed, or going through a rough period, and probably saved lives by passing the information to the proper people and getting the students help. Many students said he was one of the best people they met at MIT.

He died a few months ago of a heart attack, and students and alumni created a scholarship fund in his name for students, with preference to residents of the two dorms he took care of so devotedly. I think there’s going to be student art show in the fall to help raise money, but in the meantime, hot dogs and sodas are being sold in the courtyard every Thursday.

Harvey ’06 grills hot dogs. I don’t think he realized I was there with a camera until he turned around right before I took the picture. 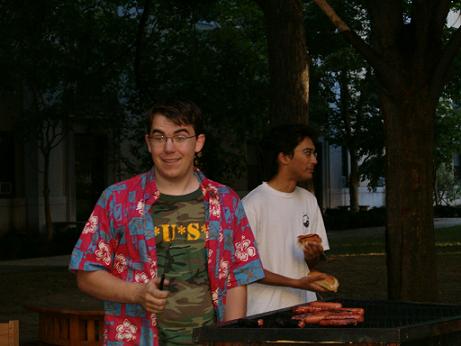 Shmike ’00 (he has a “real” name but I bet half his friends don’t remember it – I had to think for several seconds) bought a soda and several hotdogs. 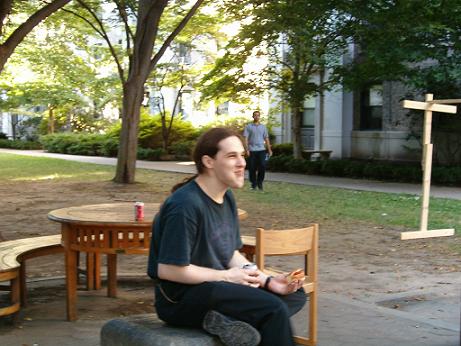 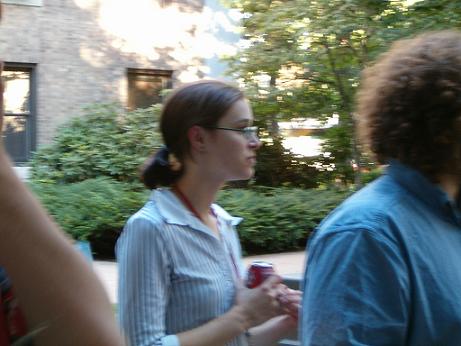 I bought two hot dogs and a soda. I think Senior Haus is going to hold a sushi bar sometime in August, as well, to raise money for the fund. It makes me proud to be an MIT student when I see how devoted students here are to causes they care about.

So, that was the middle of my week. Anyone else do anything fun?

And by the way, following Ben‘s advice, I did in fact wear combat boots with a skirt when I met with President Hockfield on Thursday. *grin*

7 responses to “The middle days of the week”