The Thong I Should Be Wearing [UPDATE] by Snively '11

Here’s the story. Well, actually, here’s the backstory, then the story.

Back in July 2006 there was an issue with the Doonesbury comic strip. The main character’s daughter in the comic strip, Alex, had to decide which college to go to. She was accepted to several tech schools and the comic strip writer decided that he’d leave it up to a vote to decide where she went. He put up an online poll and, well —

I read this before I came to MIT and thought it was one of the funniest things ever. I lol’d and lol’d, and then Melis wrote a wrap up entry that showed the end result of MIT’s poll-bombing.

Fast forward a couple of years. Here’s what happened this time.

An e-mail got sent to several sororities, telling them about a new contest that Victoria Secret was having for their collegiate Pink! line. They had a list of 31 colleges and you could vote for yours. Whichever college had the most votes after an unspecified amount of time would be declared the winner and would have their own line of Pink! clothing.

BUT! This wasn’t just an e-mail. This was a special e-mail. This was an e-mail with an HTML file attached to it. An html file that, when opened in a browser, would register up to four votes per second for MIT. I smell another poll-bombing!

That e-mail was subsequently e-mailed to the East Campus dorm list and that’s when the fun began. The script was opened up on multiple servers, dozens of computers, hundreds of windows, and thousands of tabs, each voting four times a second. MIT, which used to be at 300,000 votes was soon to be catapulted to the upper echelon of schools in the contest. Drexel already had about 5,000,000 votes, meaning they had obviously run a script as well, but nowhere nearly as vigorous as us.

Then all hell broke loose. The hack was sent to all of the class lists, meaning every single student at MIT had the script in their inbox. The e-mail thread that followed was hilarious! Here are some excerpts.

Drexler is currently averaging only 400.8 votes per minute.

For a short amount of time the website was back up with a “fix” that prevented script voting. Essentially, they just added a cookie that wrote vote=”true” if you voted. Everybody turned off cookies and went back to it, crashing the server again.

Crashed. We’re talking gone, nobody (not even my family in Oregon) could access it. Then, magically, a day or two later, it reappeared. The attack was back on! But. . . wait . . . votes for MIT weren’t being counted! It didn’t matter where the votes were coming from, Victoria Secret had completely locked out the top several schools from voting, including MIT.

The e-mail thread blazed on.

I just sent an email to the vSPINK people using their “contact us” form. I complained that they really need to fix their broken app so that the other 3 million students here at MIT can voice their school pride.

We’ll see how it goes.

The effort split at this point. One group of people created a mailing list devoted to reverse engineering the code on Victoria Secret’s website so that they could unlock MIT’s votes. Another group set to running the scripts on some of their favorite other schools. Suddenly, schools you’d never expect to have their own Victoria Secret clothing lines were creeping up the leaderboard. At this point, the website looked like this: 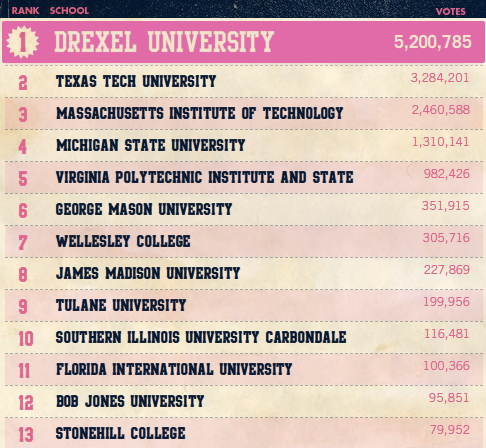 We had gone from 300,000 to 2.4 million in less than a day. Rock. Also, note the appearance of George Mason University, Wellesley College, and Bob Jones University. None of them had actually been on the leaderboard earlier. This is right at the onset of MIT’s attempt to level the playing field, running scripts for the colleges we thought needed some extra votes. What did the leaderboard look like today? 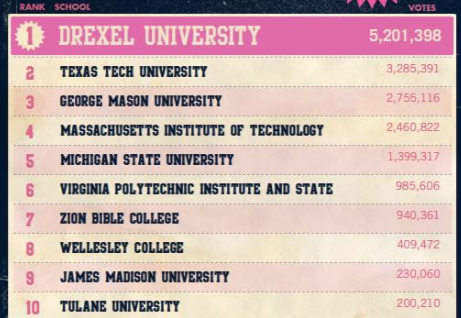 [Ok, quick note. I’ve received a number of e-mails from students at GMU and apparently they ran all their own scripts. Obviously, I had no way of knowing this, but kudos to y’all. MIT did help a bit, but obviously not nearly as much as I thought. We’d still like to take credit for Zion Bible College, assuming nobody there wrote any scripts]

Now. . . here’s the amazing part. I can’t access VSPink.com. Nobody at MIT can. Any IP address that starts with 18 (MIT’s personal IP address) is instantly blocked. Sara ’12, who’s at home this weekend, sent me some screenshots though, and I’ve noticed some renovations to the Victoria Secret website. First change, a new little block of text above the voting box. 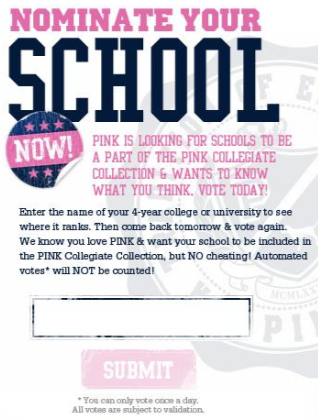 NO cheating. Ha. Sure. So, it’s not really cheating unless it’s against the rules, and there were never any rules.

The next addition was a little pink star above the top list of schools.

On to us? LOL, busted. But, hey, it looks like we won a free visit from the Victoria Secret Pink! crew, rock on!

Finally, their last lovely addition, was a captcha system. 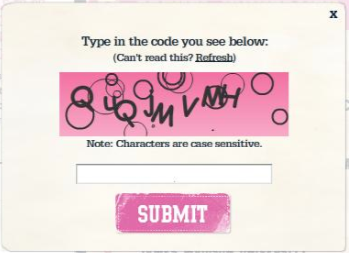 We’re kinda stuck now. Our scripts don’t actually break captchas. But, it was an epic battle between the MIT students and the Victoria Secret SysAdmins, and hopefully there are no hard feelings. We had a great time and based on Victoria Secret’s new little warnings on their website, they had a good time protecting their site from us.

No, we didn’t win, but that’s ok. Sometimes it’s not about winning, it’s about the fight and the competition, something we definitely enjoyed.

Oh, by the way, if you aren’t at MIT, you can still vote for us, so head over to their website and vote for us! We can do it!

40 responses to “The Thong I Should Be Wearing [UPDATE]”