waving goodbye to my MIT experience

At some point, when we got kicked out last March, there were a lot of things that I had done for the last time that I hadn’t realized.

I’m very attached to the last times in my life, especially because I’ve realized recently that some of them are so very final. Earlier this year, a friend of mine passed away suddenly, and it shook me to my core that the last time I would ever see him had been outside my LA Airbnb, hugging him as his boyfriend waited in the car, promising that I’d visit again soon. I had even been planning on it, before the pandemic hit.

One of the big reasons that I wanted to come back to campus was so that I could experience these last times and be cognizant of them. I don’t even remember what the last East Campus party I went to was, nor what the last meal that I cooked in my hall kitchen as I knew and loved it⁠01 the murals got whitewashed :( was. And that’s sad, because those experiences – among many others – were meaningful and relevant parts of my MIT experience, and they’ve sort of just passed into the mist of my memory because of how quickly everything changed.

As I’m writing this post, the last week of my on campus life is upon me. This may seem particularly granular, but it’s strange to me that I’ve slept my last Sunday night – usually the worst night of the week for me as I struggle to wake up for Monday morning commitments – at MIT.

I wanted to document some of my lasts here, because honestly, some of them are so mundane that I’ll forget them in a few months, if not weeks. But even though they’re mundane, they mean something to me, and I don’t want to forget about them.

Last on-campus class: 6.UAT workshop in 32-141. I actually had to look this one up in my email, because it passed without me even realizing it. While I can’t say for sure, I actually think my first ever class at MIT might have been 6.008 in 32-141, so maybe this is a fitting end.

Last shower in shallow Walcott bathroom: 11/21, 6:10 pm. This is by far my favorite shower – like, anywhere. Some combination of how ENORMOUS the stall is, the lighting, the cleanliness, the water pressure, and the extremely hot water made this the ideal shower for me. Plus, there’s a really nice mural that I always got to stare at while destressing from the day, or just washing *all* of the sweat I had generated during fencing practice off of my body. I’m going to miss it a lot. 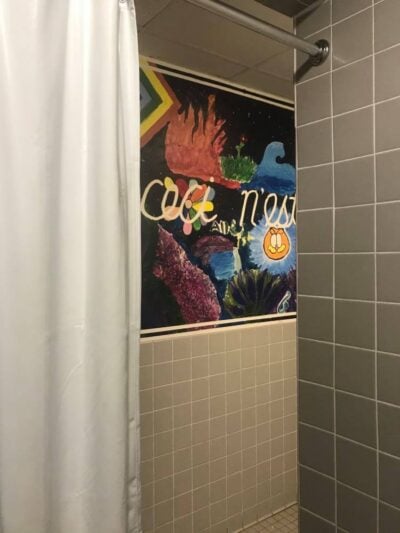 the view from the shower

Last Starbucks run: 11/18, ~4:25. This one hurt more than I expected. In better times, we would all strategize to get the buy one get one free deals, and somebody would a Starbucks account would pay for everybody to get the extra stars. On Wednesday, I walked there alone, thinking about all the times I’ve made this walk – to reward myself after an exam, to power myself before an exam, to grab right before a class, or just because I really wanted a peppermint mocha. And although I’ll probably keep going to this Starbucks while I work at the Media Lab in the spring, it won’t be quite the same.

Last night sleeping in my room: Saturday night, 11/21. This room is the first space that I’ve truly made mine, and I thoroughly enjoyed being in it. Although it admittedly wasn’t the best room to sleep in – it faces the Media Lab loading dock, guaranteeing that I would be roused from my slumber consistently at 5 am while trucks clanked and beeped their way down the road – I’ll always be fond of the memories of me peacefully clacking away at my keyboard while sinking into the comfort of the couch that I no longer own. 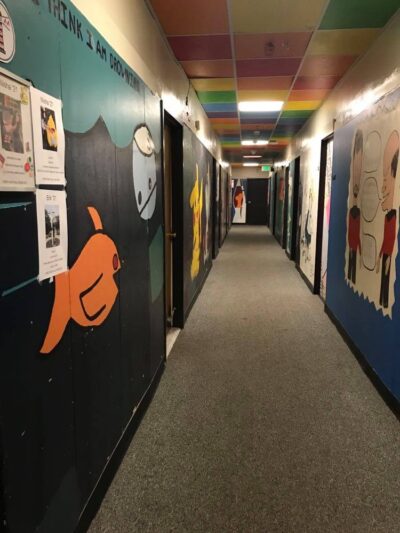 the view on exiting my room

Last night sleeping in my boyfriend’s room: Friday night, 11/20. I changed rooms twice during my tenure at East Campus, but my boyfriend only changed rooms once. As a result, we spent a good 2.5 years of our lives and relationship in there. Although I’m really excited to never have to climb up to a loft to sleep ever again, I’m going to miss all the time I spent in this room, sitting like a shrimp on his shitty couch.

Last 7-11 run: Friday night around midnight. Nearly every night, at least one person would message the hall group chat requesting a 7-11 run. And nearly every night, it would happen without fail. Although some things changed a lot about my MIT experience because of COVID, this tradition actually did not – the 7-11 groupchat, consisting primarily of on campus hallmates, was still very alive this semester. I’m so attached to this particular pilgrimage that I will be trying to make it from a mile away next semester, which is definitely not going to be the same.

There are a lot of things positive about my life that happened because of the pandemic. I never would have started running, or lived in Seattle. Honestly, Trump probably still would have been president. But because of the pandemic, I lost a *year* of my MIT experience, give or take, and that’s a huge chunk of the four that I was promised coming in. I don’t like to think about all the time that I’ve lost, and I’m saving processing the trauma for later.

So I like to think about the Nisha in a different timeline, where COVID didn’t happen. That Nisha would be surrounded by friends on the weekend right before Thanksgiving, celebrating with alumni and hallmates, and laughing and having a good time. That Nisha would have still been many months away from having her last times in college. I like to think about that, and wish that I was her. I hope she’s having the time of her life.