Things That Made Me Happy (and Sick) by Powers '23

It’s me and my infection’s TWO MONTH anniversary!! 🎉😍

I survived my first semester at MIT, and it was hella dope. I can say that. I own that.

There’s a lot I could say here, but I’ve been living my life at such a break-neck speed that I haven’t really processed my experiences enough to come up with some deep analysis of my semester. I know I’ve changed; being away from school, I notice that I interact with the world differently than I used to. Things I used to enjoy kinda suck (like sitting on a beach all day). Things that used to suck are kinda fun (like walking for three miles, or sticking out like a sore thumb because I’m wearing all black in the Florida sun). Right now, all I have for you guys is the two months of illness and a phat bundle of electric, chaotic joy.

But I think there might be something to pick apart in those two things. it’s like a venn diagram:

(excuse the dark photos. I’m on vacation and doing the best I can with a camera, markers, and printer paper) 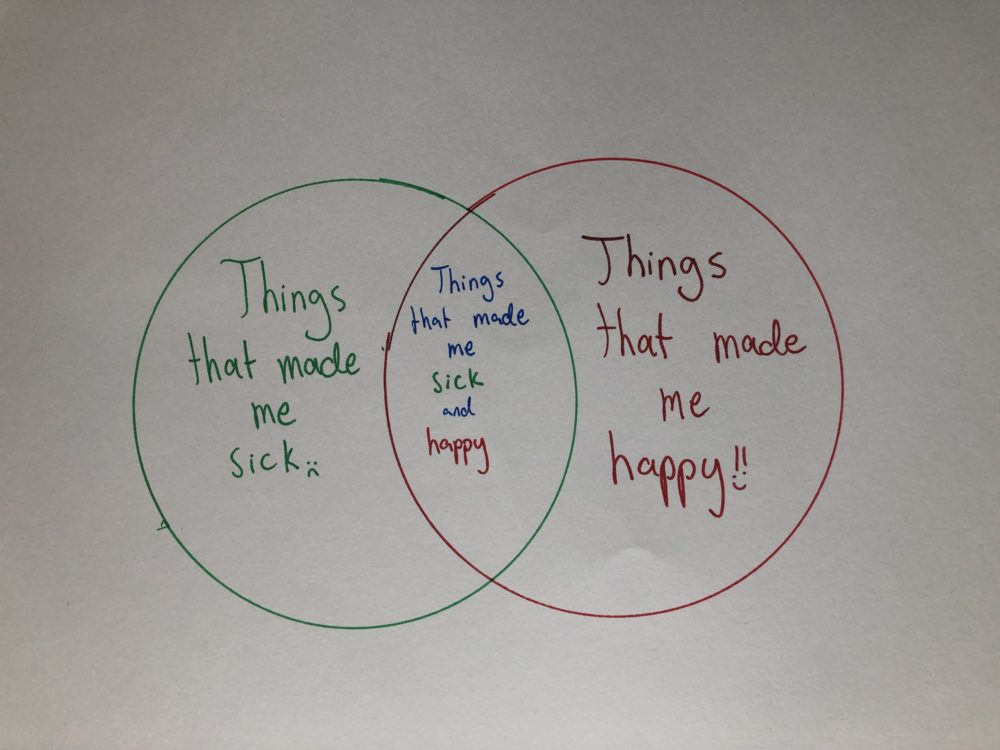 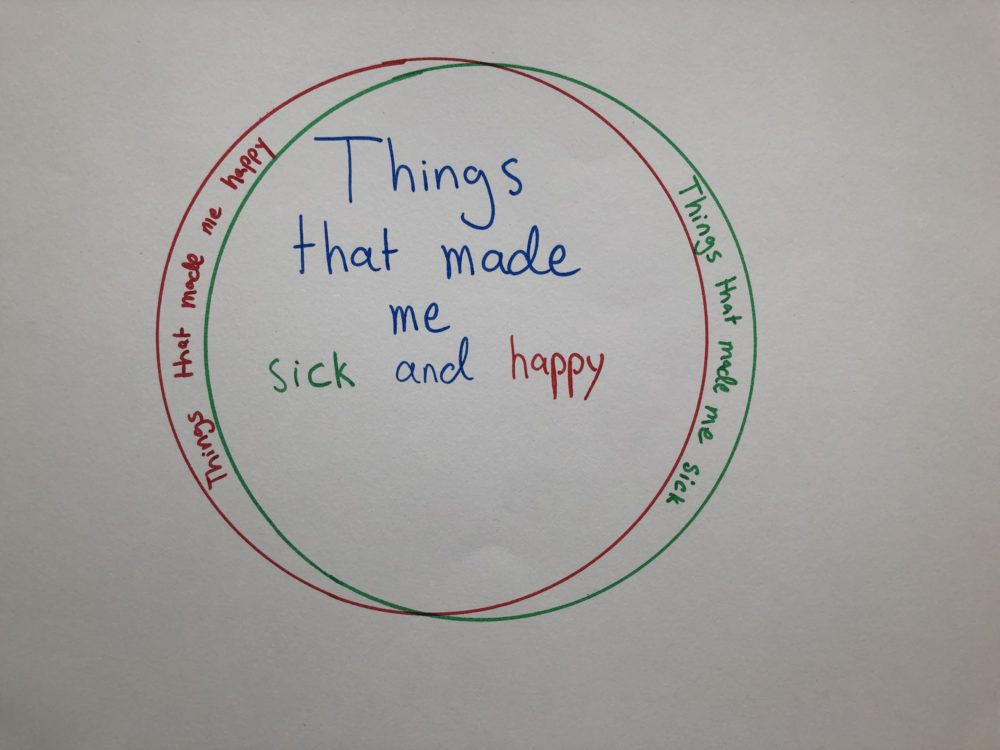 Do you ever just take a look at your life and sigh? That’s a pretty unfortunate almost-circle. Maybe let’s try a two-axis graph: 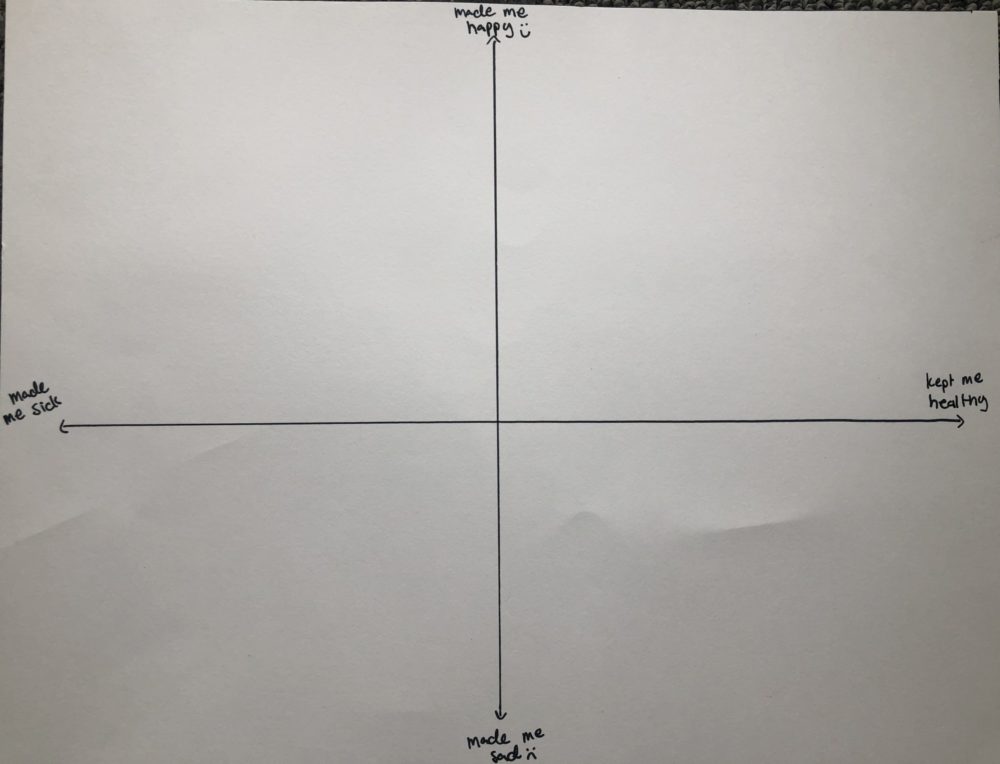 I like this one. It’s got some nuance. Quadrant one is like the “Omg my quality of life is so freaking good” section. Quadrant two is “Wow so much fun but help I can’t breathe out of my nose”. Three is just totally miserable, and four is all the annoying things I have to do so I don’t die. Perfect!

And now that’s it’s a cartesian graph, I guess I can explain some things about my semester in a way that’s not gonna hurt my very tired brain too much. Let me plot the points. 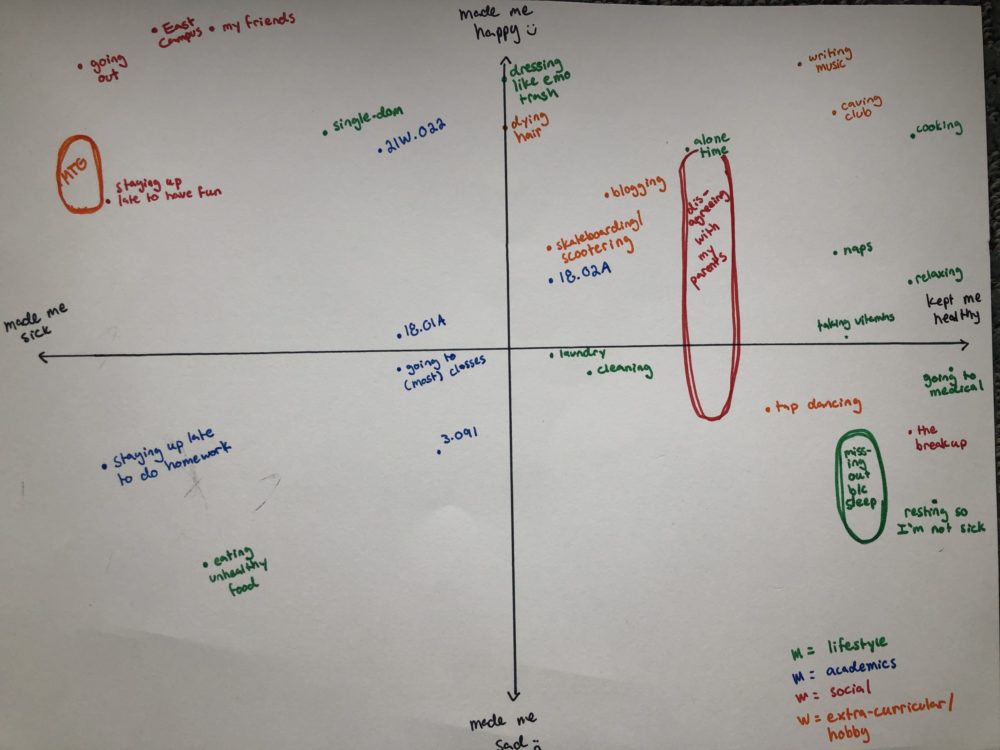 Okay, so here are some of the hallmark experiences of my semester, and yay! There’s not a lot in the third quadrant, that’s a big win. Tons of stuff is on the positive y-axis, too. It hasn’t always been like that, y’know? But not everything that makes me happy is totally worth it. 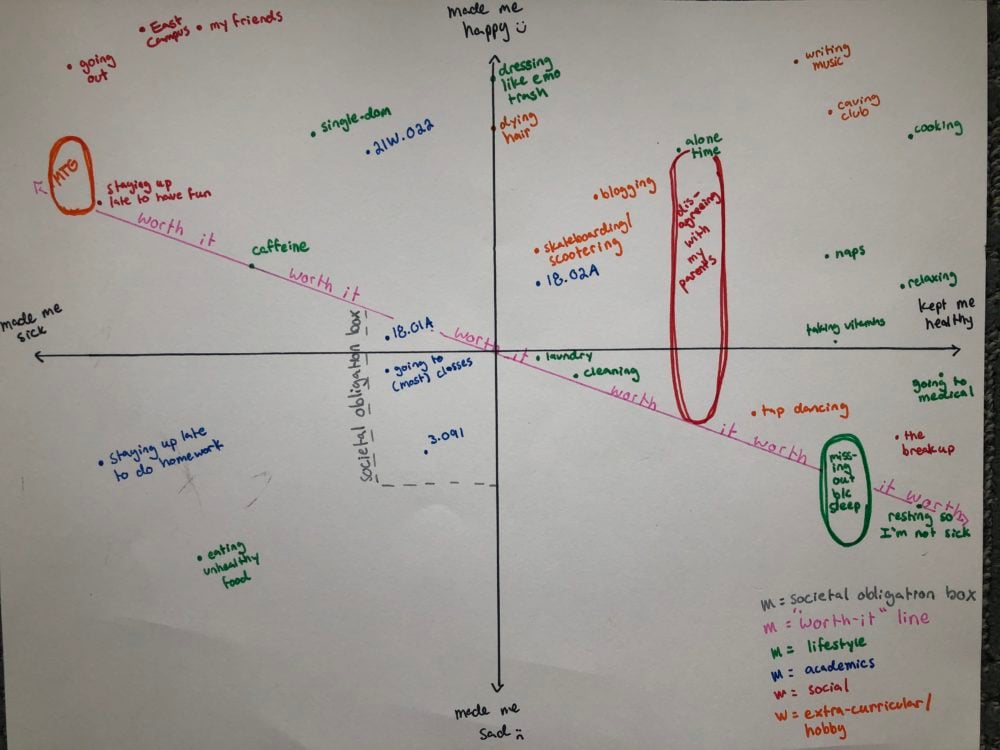 This is where I would personally put my “worth-it” line. It’s pretty self-explanatory: Anything above the line was worth it, and I would do it again. It’s got an approximate slope of -1/2; that is, my happiness is about twice as important to me as my physical health. I know that sounds bad, but I would argue that a lot of college students would say their ratio is about the same. A lot of people don’t even have health on their graph! But when you’re sick more often than you’re healthy, you start to notice.

I’ve also included a societal obligation box. These things are *technically* under the worth-it line, but I had to do them because I’m a human who wants to graduate from MIT. I would do these again because sometimes you just gotta do stuff that sucks. Getting my degree will eventually make me both happy AND less sick because I’ll be able to pay for healthcare. Rip.

I’ll break down some notable points:

Oh caffeine, my sweet, sweet addiction. I drink espresso black. I have a double shot every day at 6 PM and a late-night green tea. I waited in a VERY long line outside in the rain to visit one of Starbucks’s 6 reserve roasters in the WORLD; I dropped like 50 dollars in there and drank so much coffee I had a stomach ache for the rest of the day. At the same time, though, it’s just that: an addiction. I had full-on withdrawal during finals when I decided I wouldn’t have anything in the afternoon so I could sleep at a decent time. I drank a double cappuccino that morning, but I still had a headache, fatigue, and extreme chills. My friends finally convinced me to have a green tea so I wasn’t legit DYING the night before the 8.01 final, but it made me realize how physically dependent I am on this substance. Before that night I would’ve said it was worth it, but I’ve down-graded it to being right on the line.

All the points involving sleep

As you can see, there are “sleep” points in all four quadrants. My relationship with sleep is a little… complicated? East Campus is basically nocturnal, which isn’t ideal when you’ve got a 9 AM lectures most mornings. Still, I have some really great memories from the times I decided to say “screw it” and stay up until four doing all kinds of crazy stuff with the people I love. I don’t regret those nights, or the miserable days that came after. BUT. I do regret the procrastination that made me stay up late when I reeeaaalllyyy didn’t want to. And I kinda-sorta regret sleeping when cool things were happening. I don’t know, my sleep schedule is just a mess. Naps are the solution, right?

Disagreeing with my parents

I took this picture right after I FYREed to East Campus. 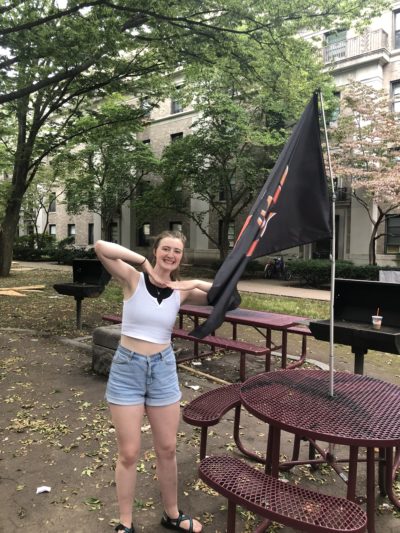 At this point, my parents had no clue what I’d just done. I was totally aware that they weren’t huge East Campus fans, but I was just as sure that EC was the right dorm for me. They weren’t thrilled when I told them, but they slowly learned to love the place I now call home. It’s that same spirit that convinced me to dye my hair, dress the way I want to, and finally come out to my family.

I have MIT’s extended insurance plan, which means urgent care, prescriptions, and x-rays come at no extra cost to me. Between a sprained knee, norovirus, and a sinus infection, I’ve put it to VERY good use.

Ok, so the look is a liiiiiiiittle more general than just emo, but FINALLY!! I’ve always wanted to look like this, and now that I A) don’t have a school uniform, B) live on my own, and C) have a job, I can finally fulfill the wildest dreams of my 16-year-old self. The pictures (with a beautiful curtain backdrop) speak for themselves. Thanks to my sister Katie for taking them :) 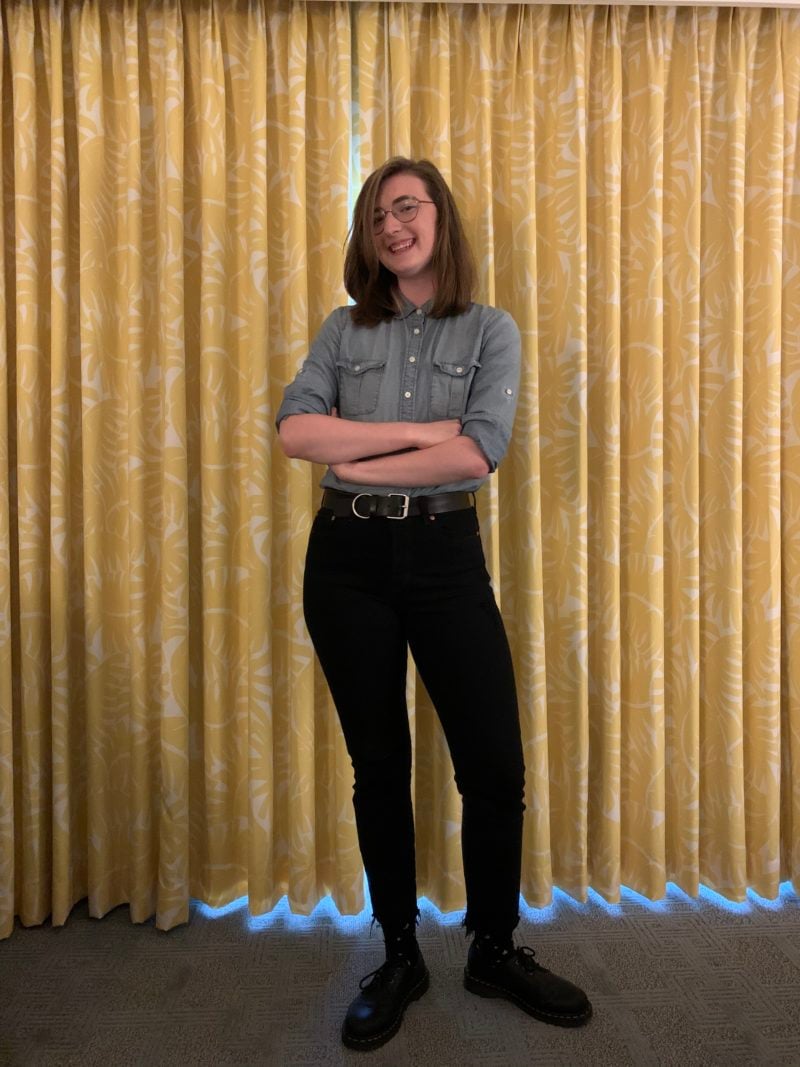 Not too emo, I just really like this look 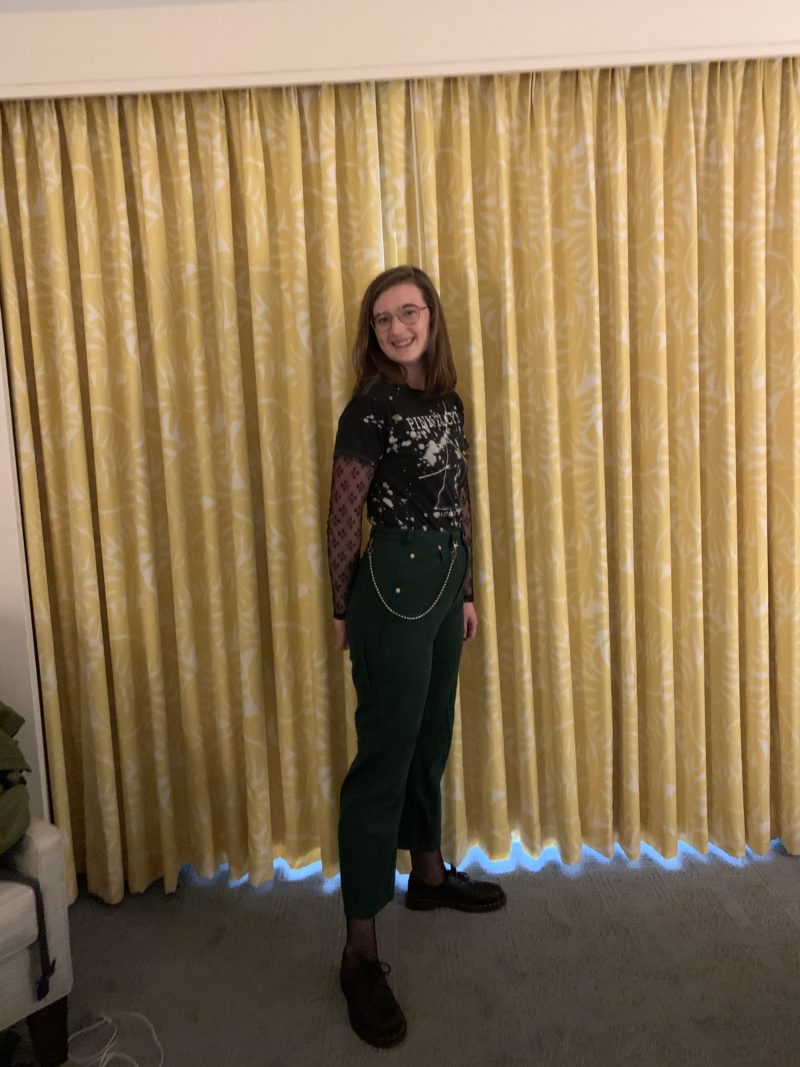 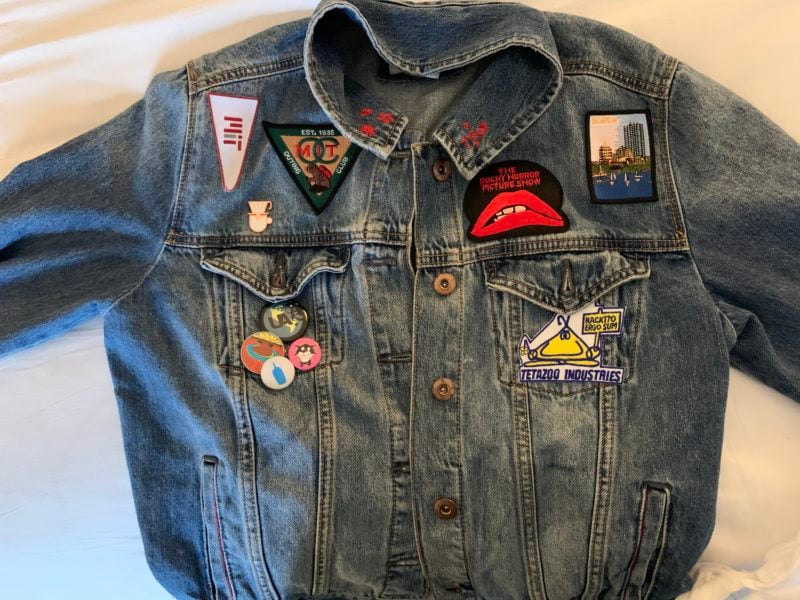 Behold: my identity on a jacket

I love to cook so much, and I cook pretty healthy food! Living in a cook-for-yourself dorm has saved me money, motivated me to eat healthier, and forced me to engage in one of my favorite hobbies. Here are some pics; can you tell I like eggs? 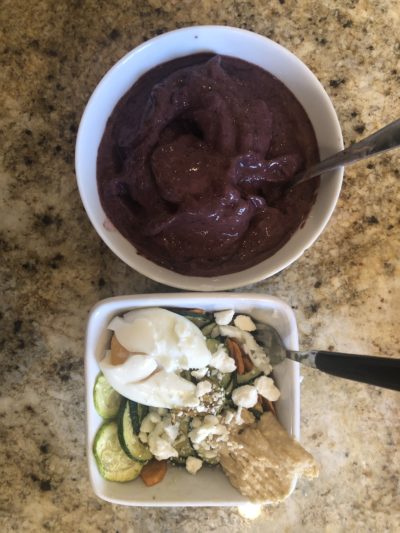 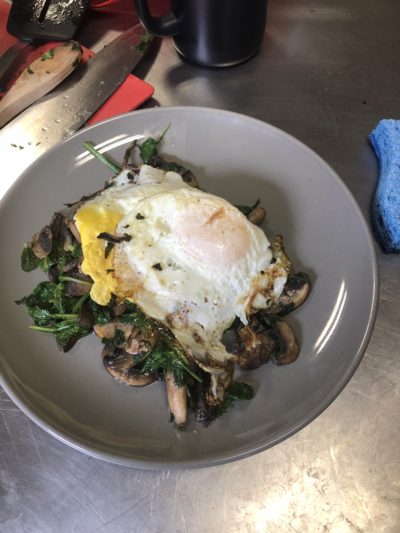 I know some of you guys read these, so here’s my open letter to y’all:

Thank you for the viruses, you filthy animals. I love you more than you know.

To end this, I’m going to include one more graph. 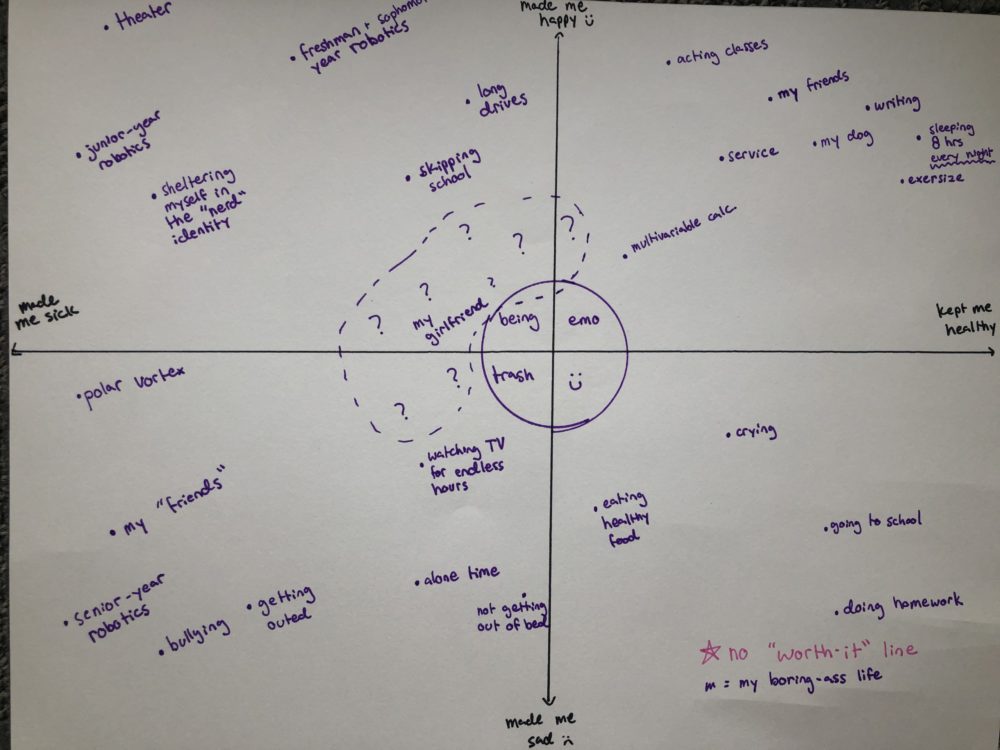 This is the same coordinate system, but for my high school years. I’ll level with you guys: High school kinda sucked for me. There were a few things that made me happy, but they were like tiny pin-point stars in a dark, endless night sky. I was physically healthier, but most of the time I felt pretty alone. MIT’s been pure sunshine compared to that. I feel like I’m witnessing the dawn of my life as it was always meant to be, and the view is stunning.

If only I wasn’t sniffling so god-damn much.