This was meant to be written a week and a half ago by Jessie L. '07

Yeah, I’ve been a slacker about writing this up. So in my last entry, Caltech’s cannon appeared at MIT for CPW, complete with intricately machined ring around the barrel. Of course, it was not going to stay forever, and I’d heard rumors of Caltech coming to claim it.

The Monday after CPW – I enjoyed seeing so very many of you, by the way :) – I was asleep. Because it was 6:45 in the morning. And I’d gone to bed sort of later than I meant, and I have a Monday class at 9:30 in the morning, which is early by MIT standards. Two things happened at almost exactly the same time to interrupt my sleep (and nearly give me a heart attack – I’m not so keen on sudden loud noises, especially when I’m sleeping):

1) Dennis ’08 banged on my door to tell me that Caltech had come to retrieve their cannon and that we were throwing a party.

2) Brian ’08 called me on my phone to tell me that Caltech had come to retrieve their cannon and that we were throwing a party.

I was tempted to go back to sleep, but desire not to miss a big event won out. So I got dressed and stumbled out into the obnoxiously cold and damp early morning air, grumbling about those [obscenity] Caltech people deciding to show up at this [obscenity] [obscenity] ungodly hour on this [obscenity] freezing day when I had an [obscenity] early class.

The Caltech people had been intending to sneak off unnoticed with the cannon, leaving a cute toy one in its place. We weren’t supposed to know about it. Instead, we met them by the cannon with music, a hastily-made paper banner, and a grill with burgers and hot dogs. They didn’t want to eat, though, until they had loaded the cannon up. 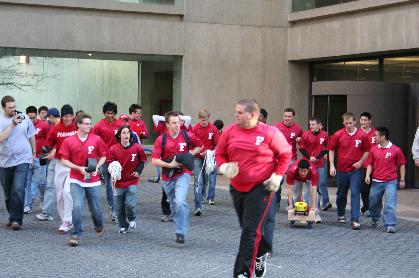 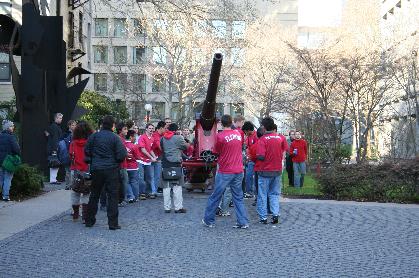 There ended up being about 40 MIT people there, mostly sleepy East Campus residents in pajamas. Here, we watch as Fleming tries to load the cannon onto the truck. This took a while. We kept offering them the few burgers that had already been grilled. They ignored us, probably because they were too busy doing hard physical labor on no sleep in freezing weather, so the burgers got cold. I ate one. I was hungry. 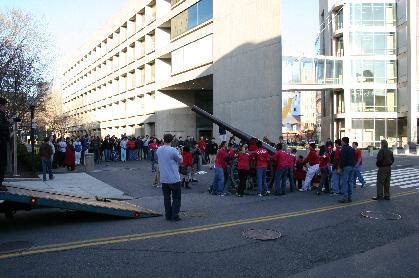 After they loaded the cannon onto the truck, they became much happier and friendlier. We all went back to the Dot (the grassy area in front of building 54) and partied. Campus Police made us turn off the music and complained a lot about it being an unregistered party. I guess I can see their position, but I ask you, how were we going to register a party at that time of night on that notice? 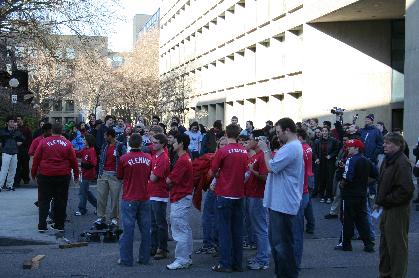 Eventually I left the party so that I could pretend to sleep for half an hour before getting ready for class. I’m glad I was there. It’s one of those things where I suspect that in several years I would be sad if I hadn’t been there. Kind of like the Time Travelers’ Convention, only less of a circus. Too bad I wasn’t a blogger when the TTC happened. That would have been fun to write about.