In my blogging folder, I had a draft post that sums up my senior year experience, with many exciting things that I had the opportunity to experience, my thoughts about the future, plans, worry, all that.
But I scratched that and began writing this post with a heavy heart.
…

Monday, April 15, 2013, I was sitting in the Margaret Cheney Room Women’s lounge on the 3rd floor of building 3 with a graduate student and we were both working furiously. I had a deadline at 5 pm for my Economics of Health class essay, so everything else happening around me was kind of a blur. Then I heard two loud claps of thunder. I looked up at the sky and it was greyer than usual and the only thought in my head was “I thought we would have beautiful weather today for the marathon? But it should be done by now though” and went back to work. Half an hour later, I checked my Facebook and couldn’t believe what I was looking at. It was one of those catatonic moments, when your body was so shocked you couldn’t move. It wasn’t thunder. I immediately called my mom who was in Vietnam, even though it was 3a.m, because I needed to talk to somebody.

After the initial shock reaction, the only thought in my head was “I volunteered in the ER at MGH, I can help, I need to help”. I called Milton, the head of the volunteer department and he told me to come down. So I put all my things in the locker and ran to the T.

The atmosphere at the hospital was visibly different, and security guards and policemen surrounded the premise. Since I left from campus and didn’t have my ID with me, I couldn’t enter the ER. Instead I helped out at the lobby, directing the traffic flow and helped bring families of runners/ spectators to the Blum center to locate their loved ones. The faces of family members stricken with worry and sadness would be engraved in my mind. I wanted to hug them, and tell them that everything would be okay. But I didn’t know that, so I didn’t. I prayed for every single minute that the patients would win in their fights against death. My heart somewhat lightened up as I witnessed how many people stopped by to ask where and how they can donate blood. “I am O-, and donating blood is the first thing that came to my mind”, one lady said. I saw other patients and their family members comforting the family members of the injured runners & spectators. People of Boston came together in vulnerable moments like this. It was love. It was kindness

Classes began on Wednesday with everyone trying to grasp, to understand the situation. Why? The question of why this happened came up again and again. I am in my last year of college and I can say with confidence that this is a peaceful and loving city. When I first arrived in the US from Vietnam, I literally didn’t understand how people could be so nice and welcoming. My host family picked me up at the airport, gave me cooking utensils, bowls, dishes, kettles, fans and all those little things that a freshman would possibly need and made a delicious meal every major holiday/celebration. People smiled at me on the street. Sometimes I was on campus until 3-4 am and didn’t feel a tinge of fear when I walked home because the MIT police drove around campus throughout the night to make sure that everything was fine. There are emergency notification posts scattered around campus that allowed students to be immediately connected to the police department. And those cold snowing winter nights when I didn’t even want to think about walking across campus to get back to Macgregor from the library? MITPD was always there to offer me a lift. But the atmosphere I saw on Wednesday was different, it was stressful and tense… it was because we haven’t had any closure.

And then the most tragic thing happened. A young and passionate officer from MIT PD passed away in the line of duty. A friend of mine, who is also a friend of Officer Sean, wrote a note yesterday on Facebook that moved me to tears. It was a message about a young man who was so full of life, kindness and optimism about the future. It was a message of love. Everything happened too abruptly, too suddenly. The image of the Stata Center that you saw online and on the TV? That is where Tech shuttle drops students off for class, for lecture or for lab everyday. Who could have thought? Who could have known?

I stayed at my dorm for the next 24 hours, watching the entire Cambridge and Boston area being emptied like ghost towns. Anxiety escalated as hours passed by with no signs of capture. I got some sleep at 7 am after an alert right outside my dorm. It was the strangest, most perturbed sleep that I have ever gotten: I woke up every hour or so, checking my newsfeed, my twitter, my Facebook, everything… hoping to see closure. And it came; the pressure and the anxiety suddenly disappeared in both Cambridge and Boston.

Online, I saw that image of 19-year-old Tsarnaev being captured that was circulated on Reddit, Facebook and every news channel, next to a video of students who celebrated the capture in the streets of Boston, next to news about the Fertilizer Plant Explosion in Texas, next to messages about Islamophobia, next to articles about Czech ambassador explaining “Chechnya Is Not the Czech Republic”, next to immigration debate, gun-control debate. A whirlwind of emotions formed inside me, so many thoughts jumbled up. I turned off my computer as I think I needed to take a step back to process all the information that flooded my newsfeed.

The most burning question I have in my mind is as an individual, what can I do to help with all these issues? Hatred, poverty, prejudice and violence tend to follow in a vicious cycle that is so so hard to break. Arguments, whether it’s personal, national or international can get overheated and escalate beyond control in a split second, just because of a single act, a single phrase sombody says. Calmness, truth and positivity are hard to come by these days. So I decided to follow a religion, the religion of kindness. I need to drown out in my heads thoughts of negativity, of pessimism, of worry, of fear and live in the moment, passing on the message of kindness. Those moments when I was so occupied by work that I lost my perception of time, those moments when I was stressed and tired that I felt like I could collapse anytime anywhere, those moments when I chose surfing online, indulging in social media and watching TV shows over enjoying a beautiful day outside or reconnecting with my friends? No more. No more. Life is way too short. Look, my four years of college are almost over! And it only seems like yesterday when I first arrived at Logan. Yes, I will pass on the message of kindness and of love everyday, whether it is volunteering, whether it is helping someone cross the road, whether it is calling my parents, calling my friends and telling them I love them, whether it is helping someone pick up something he/she drops on the floor, whether it is forgiving someone, whether it is giving thanks to the baristas at Dunkin Donuts or at Starbucks, whether it is giving those little boys and little girls at the Stata Childcare Center the biggest smile I have when I pass by there every lecture. And when I have children of my own, kindness is the first thing I will try to teach them. Passing on the message of kindness is the most crucial thing, because once it multiples, the impact will be beyond what you can imagine. It is difficult, no doubt, as we have so many responsibilities and plans. But it’s do-able if we keep this thought close to our heart.

As I watch this beautiful little boy playing at Steam Café in building 7, I can only hope that the next generations will have a better and more peaceful future. I will contribute my part today and the days to come and I hope you guys are with me.

P/S: The little boy just came over to say Hi! So much love.

Courtesy of The Tech 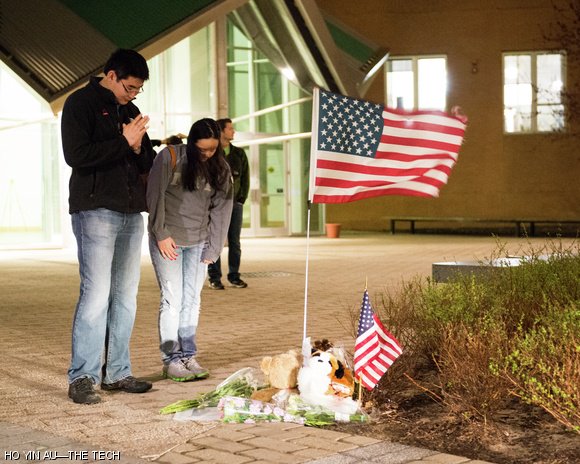 A steady stream of visitors paid tribute to MIT police officer Sean A. Collier in front of Building 32 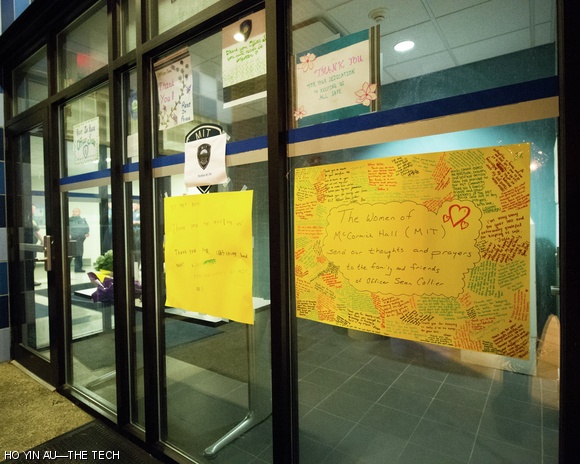 Messages and gifts of thanks and in remembrance of MIT police officer Sean A. Collier were displayed at the lobby of MIT Police headquarters. 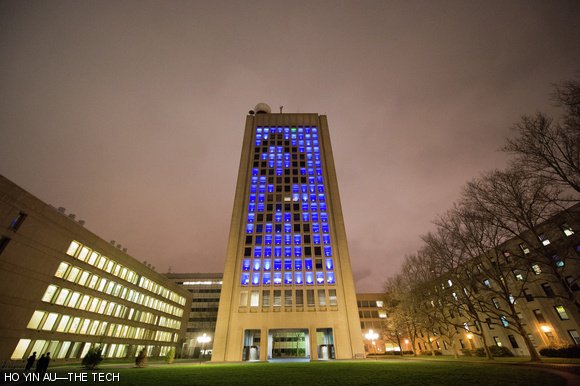 The Green Building at MIT was lit in tribute to MIT police officer Sean A. Collier on the night of Apr. 19. 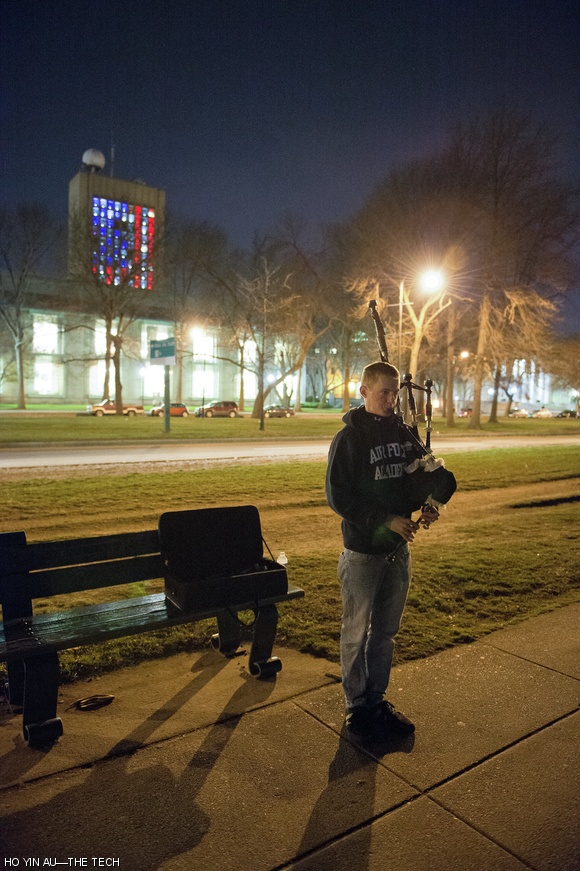 “Playing the bagpipes helps me get over bad times,” John Graham ‘16 said after he played “Amazing Grace” on the banks of the Charles River, in tribute to the victims of the Boston Marathon attacks earlier that same day.