Sorry for the super duper long hiatus :( After my final exams which ended early June, I immediately set off for some traveling (I was in desperate need of some de-stressing) then came back to Cambridge to pack my whole life there into 4 suitcases, attend a May ball and say farewell to all my friends. I then flew back to Boston on 20th June and started work/research the next day! Sounds exhilarating and somewhat exhausting, doesn’t it?

Now it has been more than two weeks since I left England. It feels somewhat surreal how time flew by so quickly! I am now a rising senior *letting out a little scream in my head*. After a year studying abroad, I thought I should do a little reflection on my experience for MIT students who are considering spending one or two semesters abroad. I feel that this is also something freshmen should know about, surprisingly enough. One regret I have is not planning my classes properly before my year abroad and now, I can’t take some of the classes I really want to take, since my schedule for senior year is already so packed :(

Studying in Cambridge is a great experience. On the top of my favorite-things-in-Cambridge list are actually the courses (Tripos) I took, which consist of physiology, pathology and biochemistry. Physiology is my favorite subject of all times! It’s supposedly really similar to MIT’s 7.20J Human Physiology, but since each Tripos lasts for one whole academic year, it was taught at much greater depth and breadth. We learnt about the cardiovascular system, respiration, endocrinology, renal physiology and body fluid homeostasis, reproduction, development, fetal and neonatal physiology, exercise physiology and man and vertebrates in extreme environment!! (Try saying all that in one breath!) Such materials are very different from the biology classes I took at MIT during my freshman and sophomore year, which mainly focus on biochemistry, molecular and cell biology. Physiology to me, acts as a bridge between the cellular and the whole-organism levels, helping me gain a very balanced and complete picture of biology as a whole. It is also an excellent partner to my other two courses, Pathology and Biochemistry.

By the way, Pathology is a really fascinating Tripos too! Now, every time someone sneezes, coughs, has an abrasion or even just talks of a disease, in my mind I think of the mechanisms of infection, activation of the immune system and tissue repair! I know, it sounds REALLY geeky, but it’s truly a fantastic feeling to understand the biological processes happening around you! 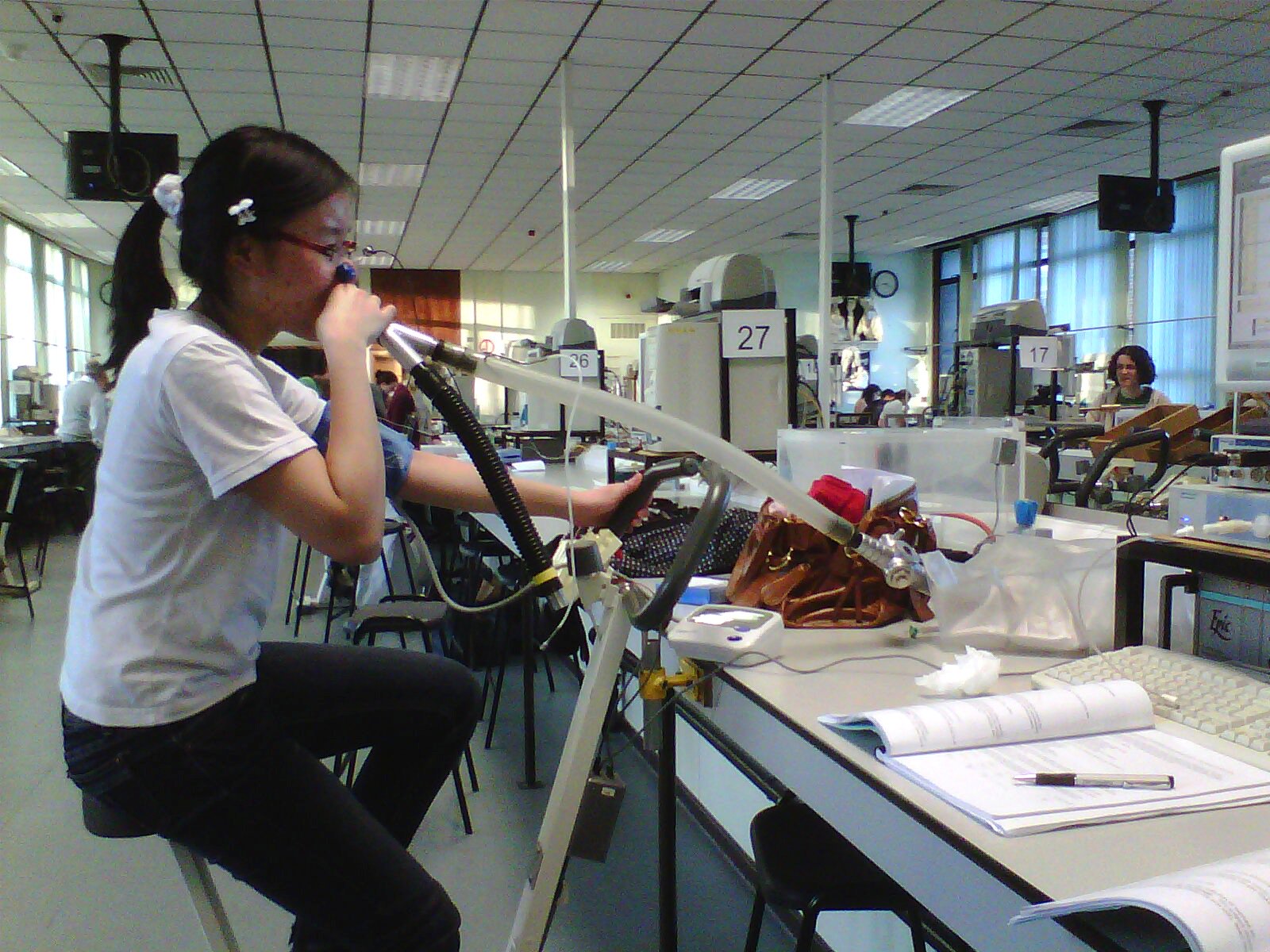 My labmate, Suehern during one of our physiology lab sessions on exercise physiology 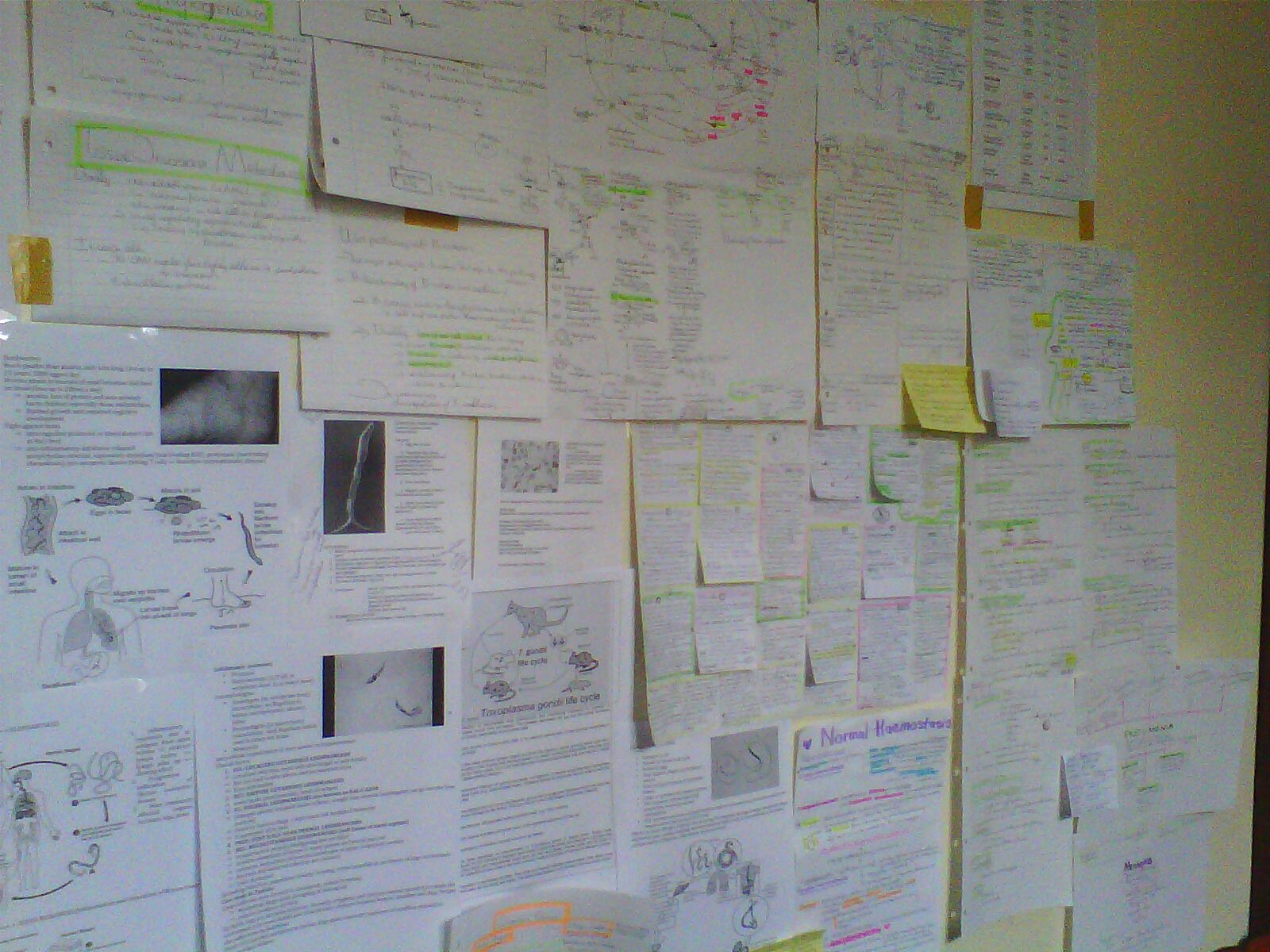 Checkout my review walls (or parts of them). Pretty intense eh? 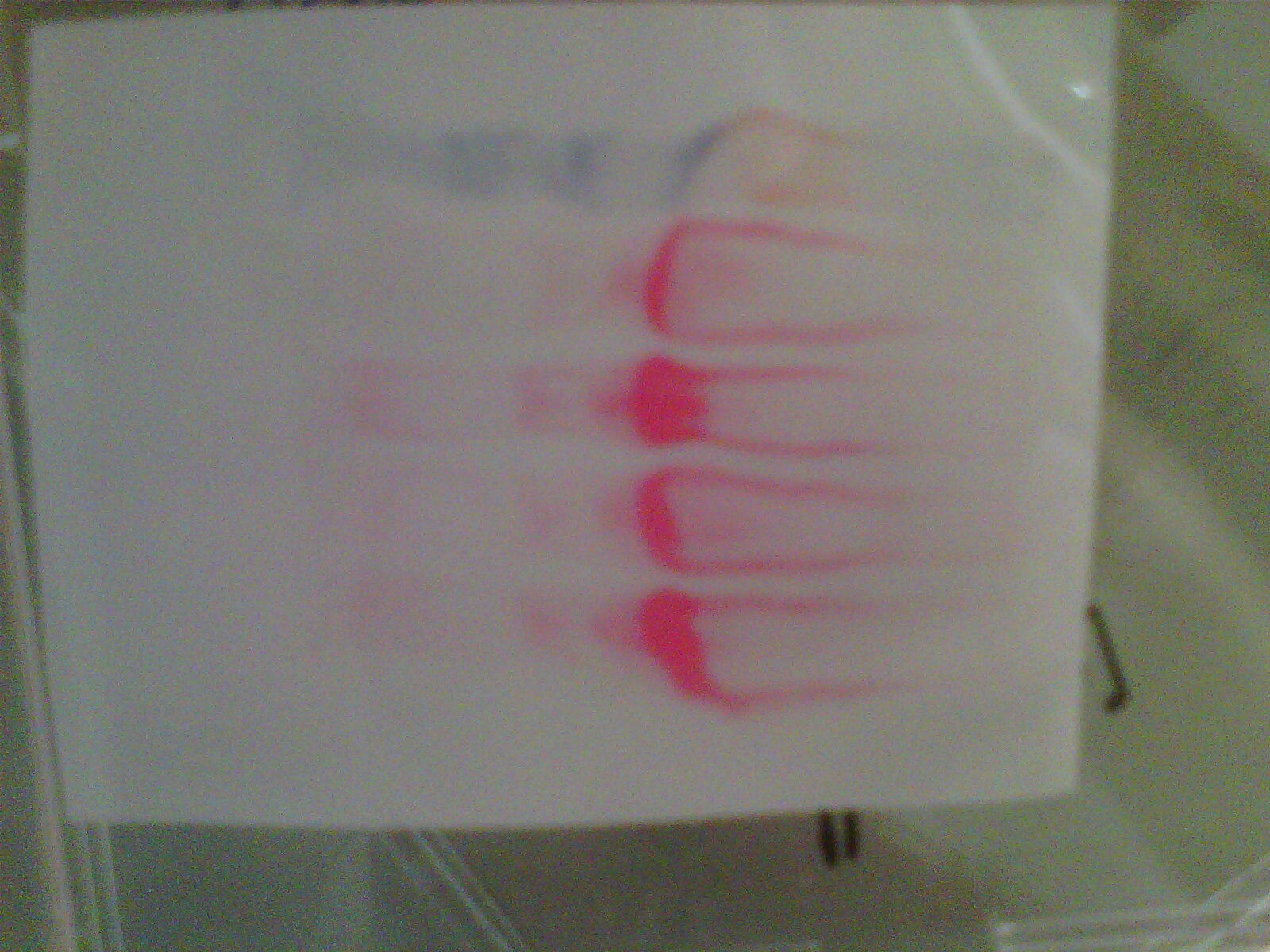 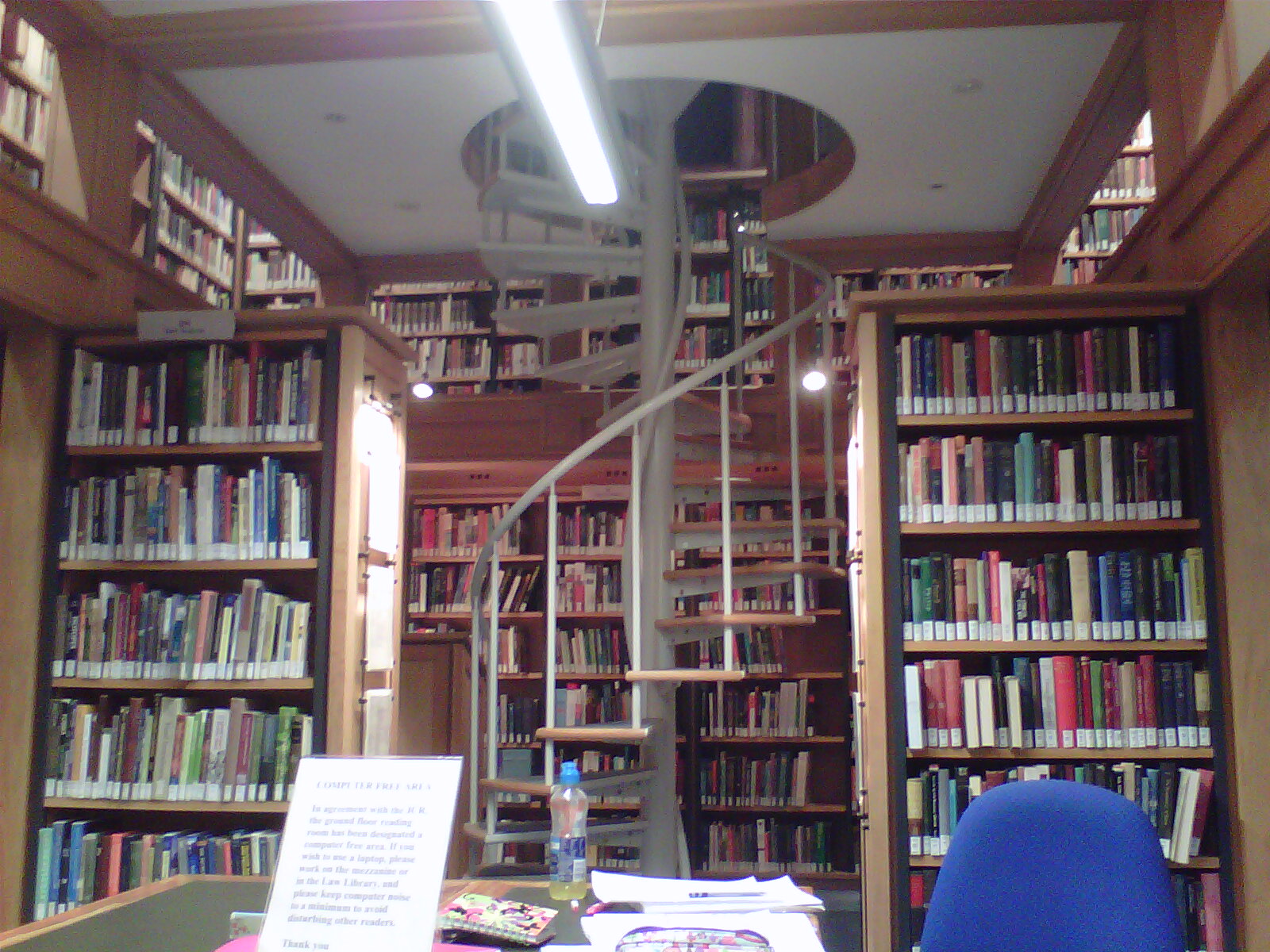 Where I spent most of April and May- Queens’ College library

Enough about classes though! In Cambridge, I also fell in love with the history and beautiful sceneries of this little town. I mean, Cambridge is voted as one of the ten most beautiful places to visit in England for a reason! The charming town replete with cobblestone streets epitomizes the quintessential Englishness: beautiful Gothic and Tudor architecture of cathedrals, libraries and dining halls, punting on the river, garden parties, sipping Pimms on the lawn, lads looking as if they come straight out of a Jane Austen novel and students biking everywhere around town.
I would like to share with you all some photos of Cambridge taken by a fellow CME student, Ho Yin Au! His photos are truly fantastic and they manage to capture the breathtaking beauty of Cambridge! 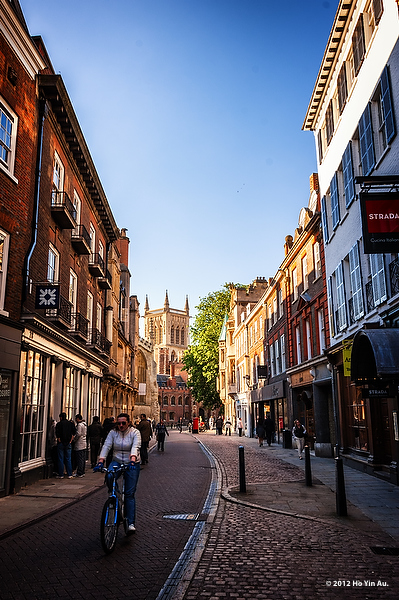 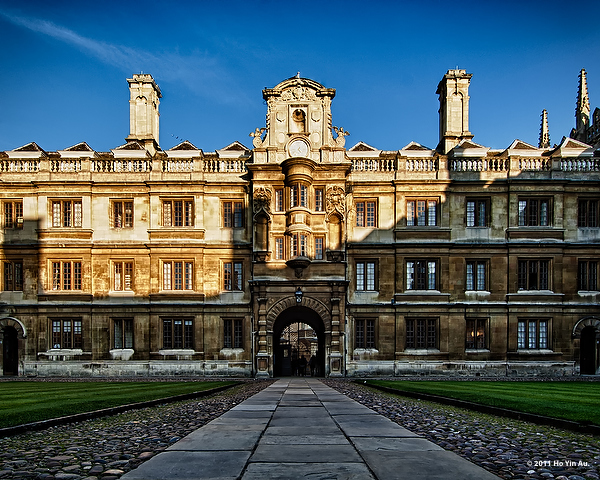 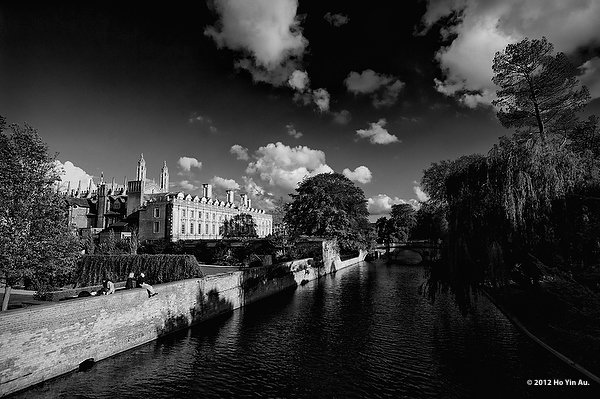 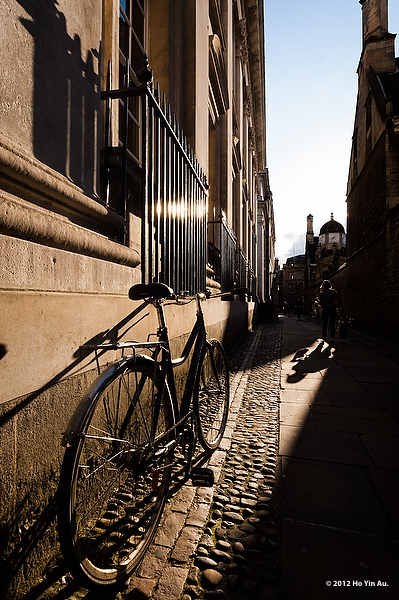 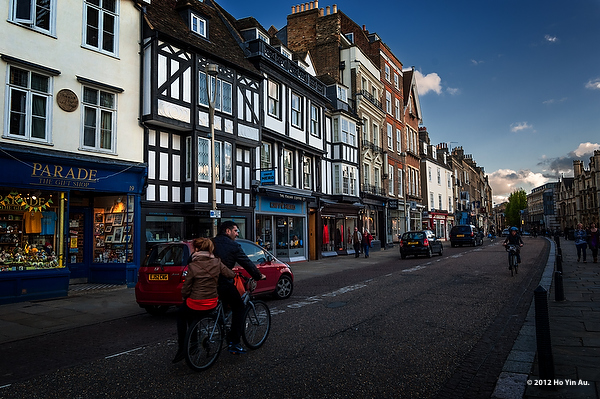 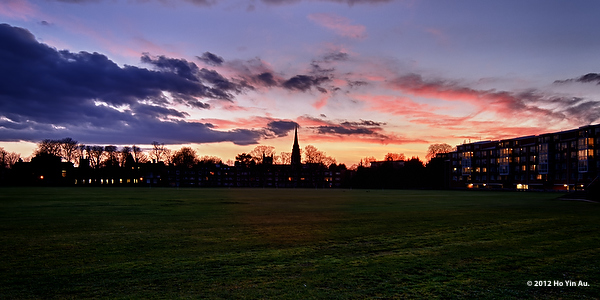 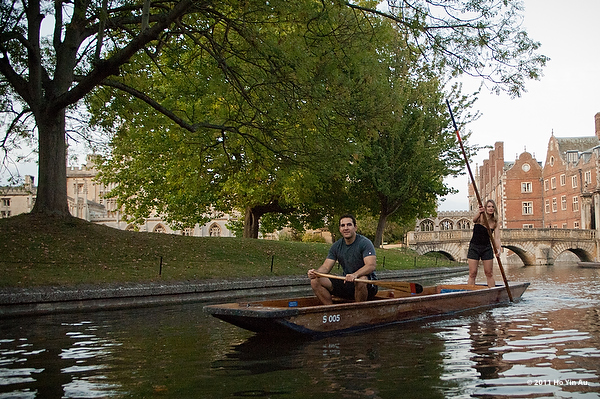 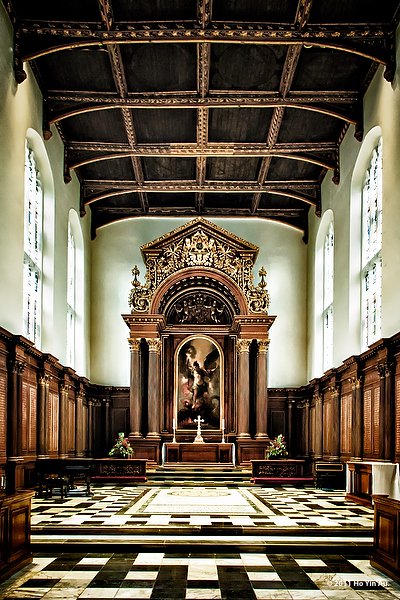 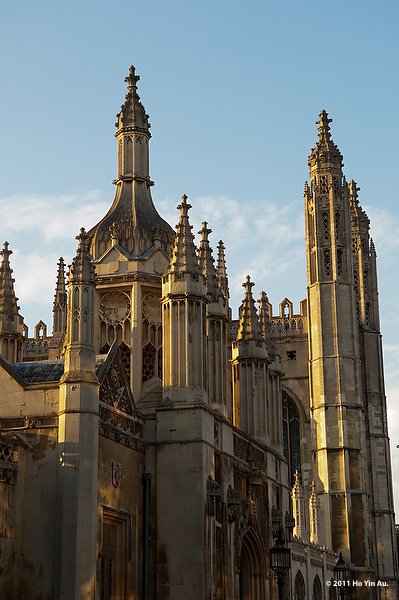 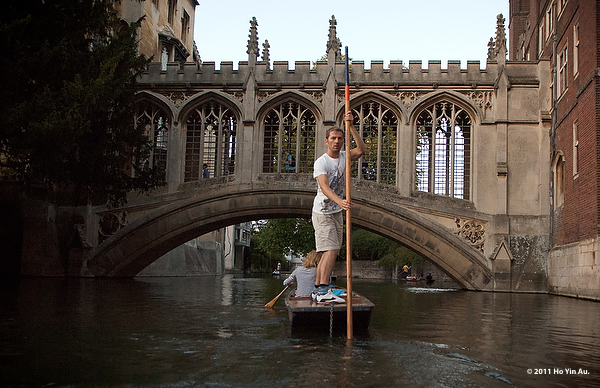 Thank you for the photos, Ho Yin!

Another aspect of Cambridge that I greatly enjoyed is Formal Halls and May balls. Formal hall is a dinner held at different colleges where students need to dress in formal attires and often gowns to dine. It’s usually held 3-4 times a week. May ball, on the other hand, is a ball only held at the end of the academic year. The ball is organized by any one of the colleges of the University of Cambridge. It’s a “glitz and glamor” event that starts around 9 p.m. and lasts until well after dawn, “Survivors photographs” are taken of those who last until morning. 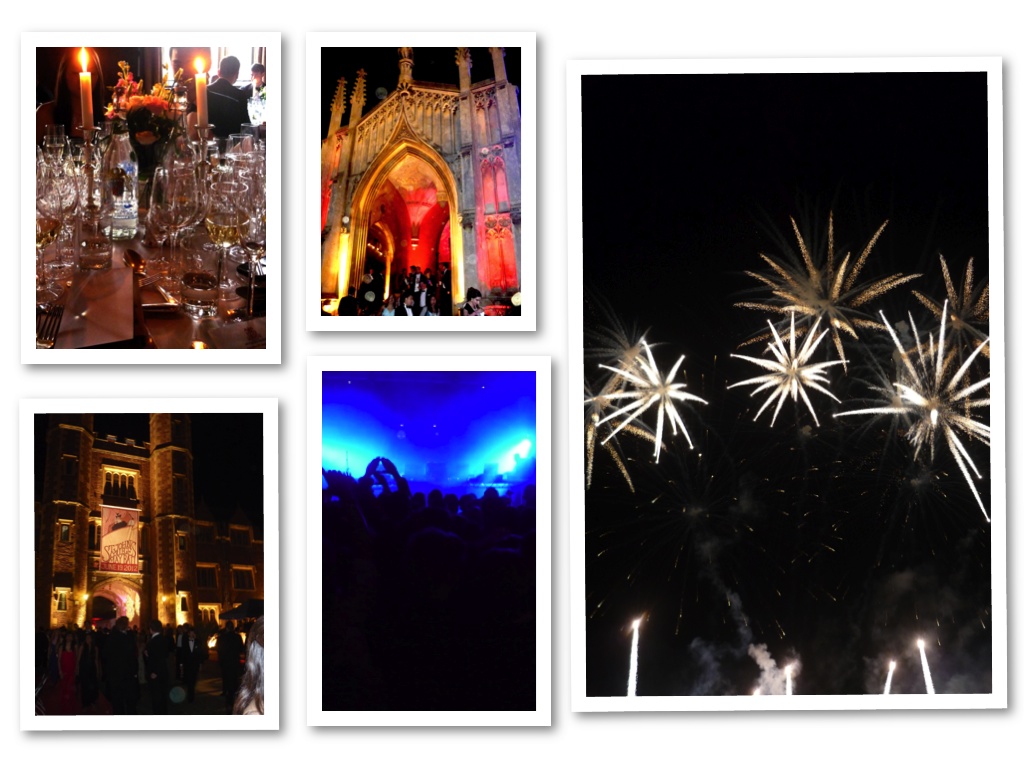 St John’s college being all glammed up for May ball and its fireworks! 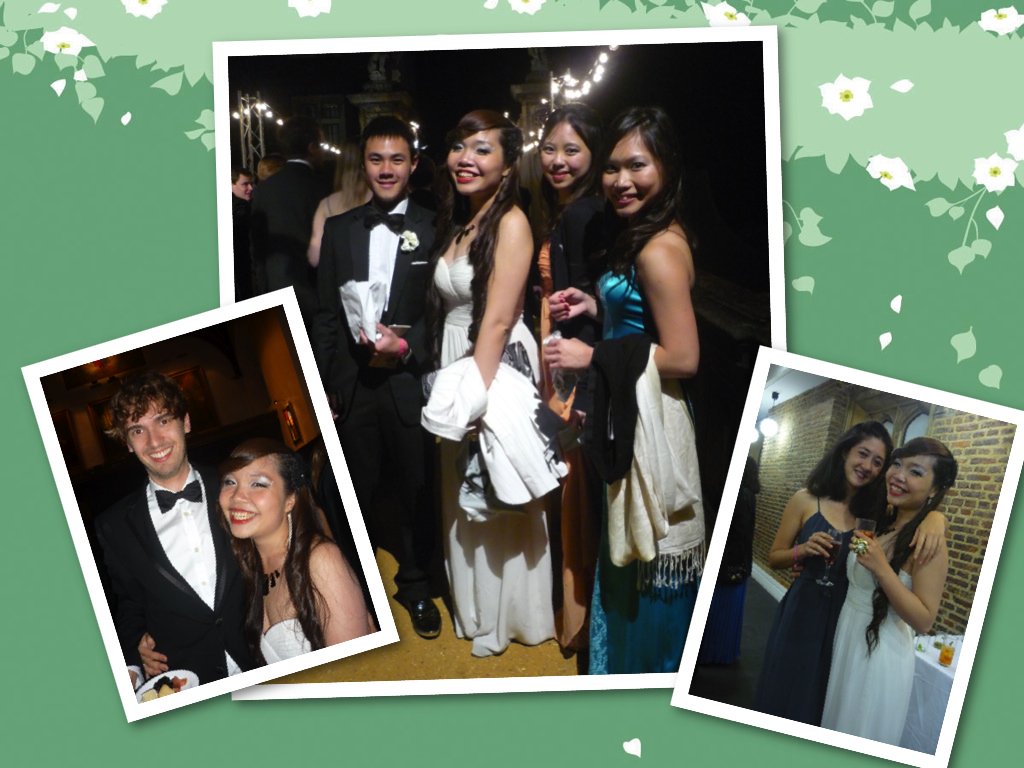 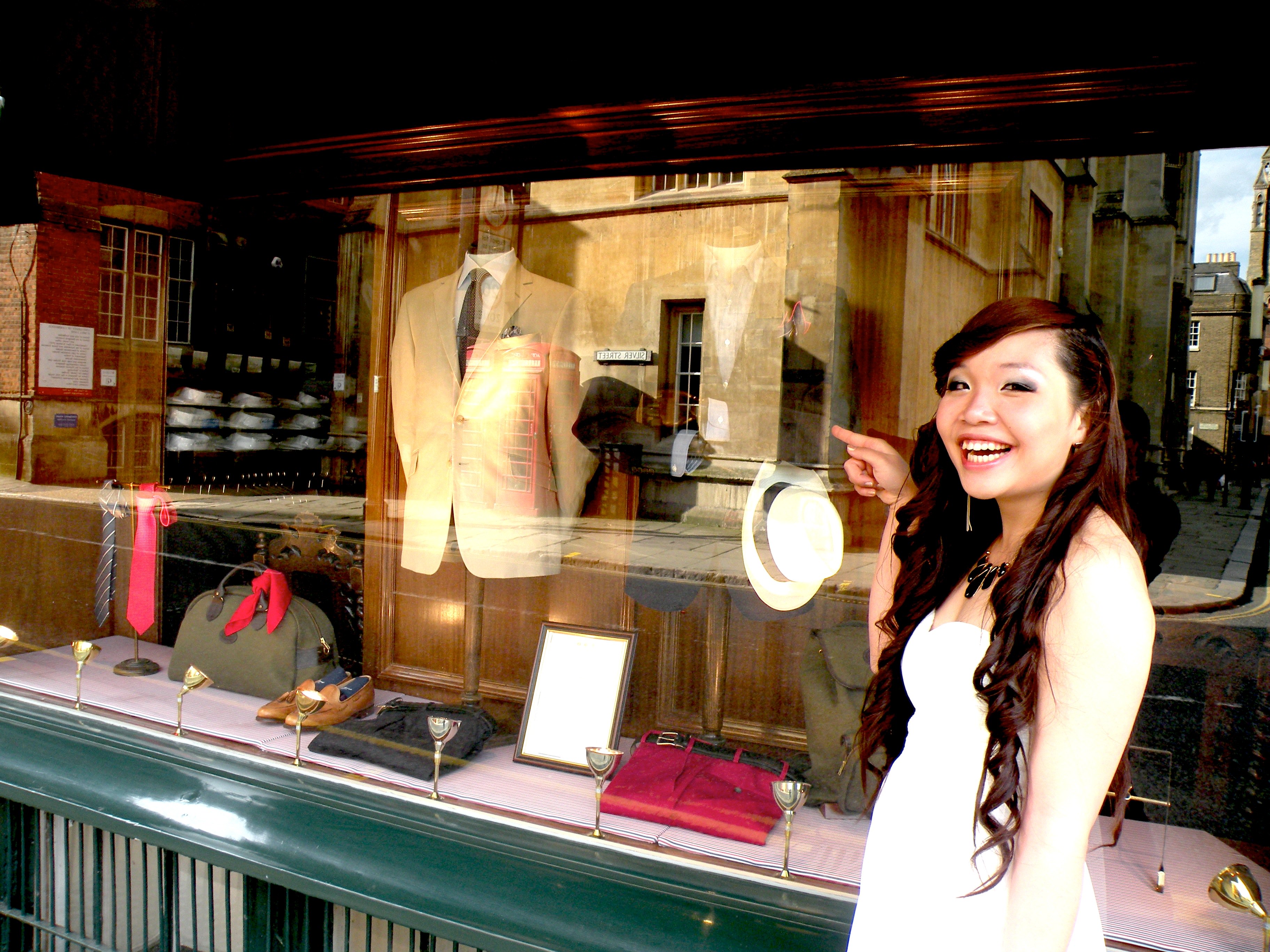 Check out the fashion of the men of Cambridge! 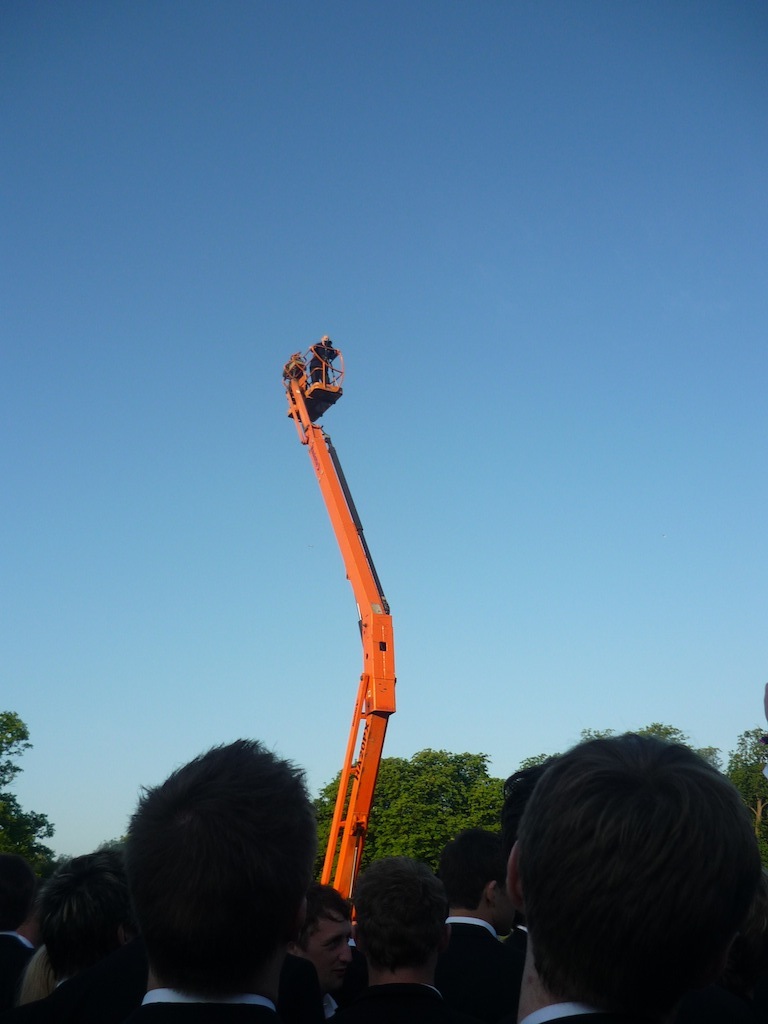 Another great perk of spending a year in Cambridge is traveling around the UK and continental Europe. In the UK, I visited London, Oxford, Birmingham, Reading, Bath, York, Edinburgh and Brighton while in continental Europe, I went to Switzerland (Bern and Geneva), Germany (Freiburg and Karlsruhe), Spain (Madrid and Toledo), Sweden (Stockholm) and Lithuania (Vilnius). Yes. I have the travel bug.

Even though, this is my forth-consecutive year I visited Europe, I was still amazed every time I reached a new destination! For instance, in the small and quiet town of Toledo (a municipality south of Madrid), my mind was blown away by Catedral Primada Santa María de Toledo’s breathtaking architecture and stained glass, as well as the cathedral’s stunning collections of valuable artworks by El Greco and Francisco Goya! 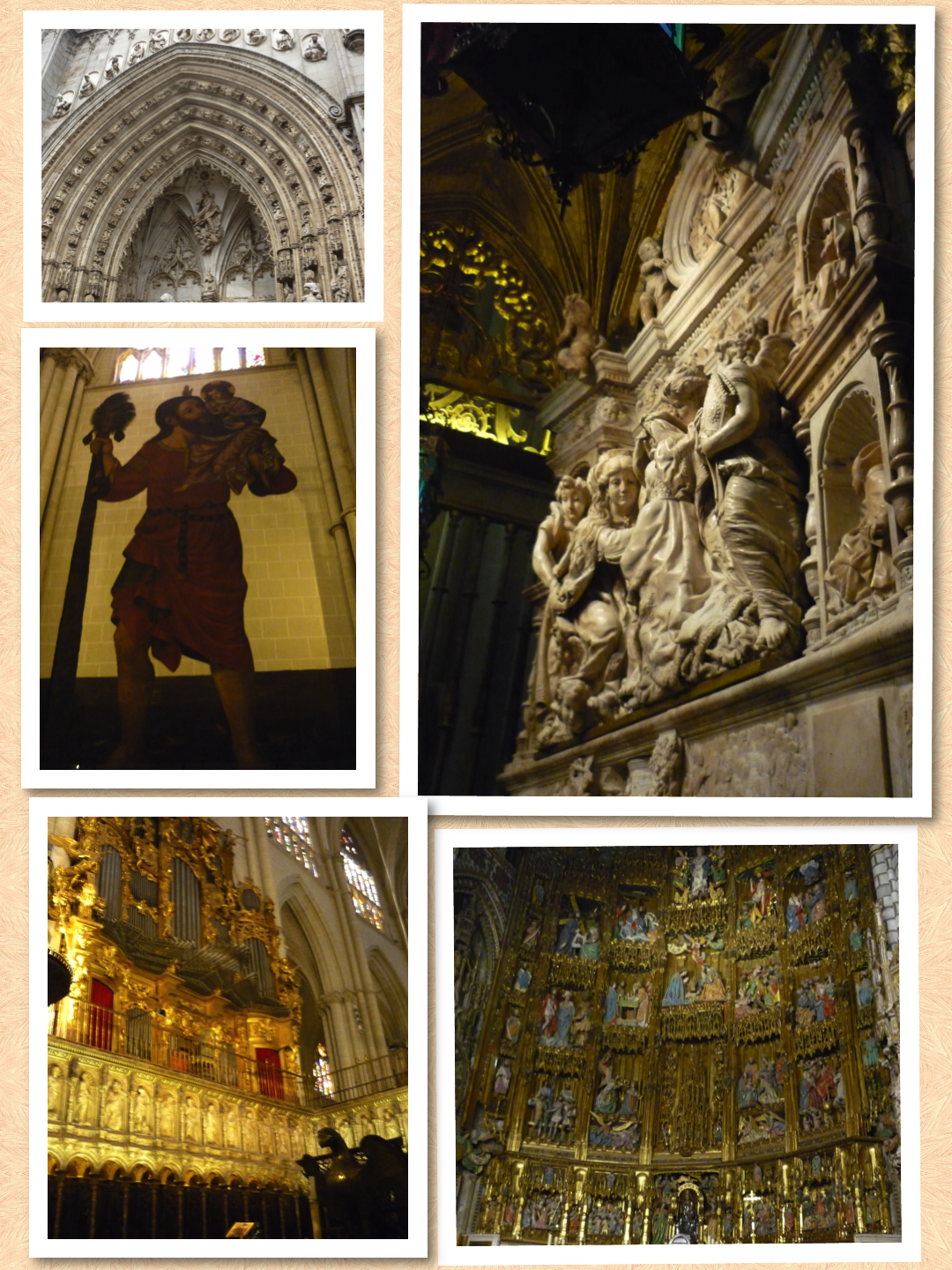 Seeing the sunlight penetrating through the ceiling windows, forming a brilliant circle of radiance did make my heart skip a beat. 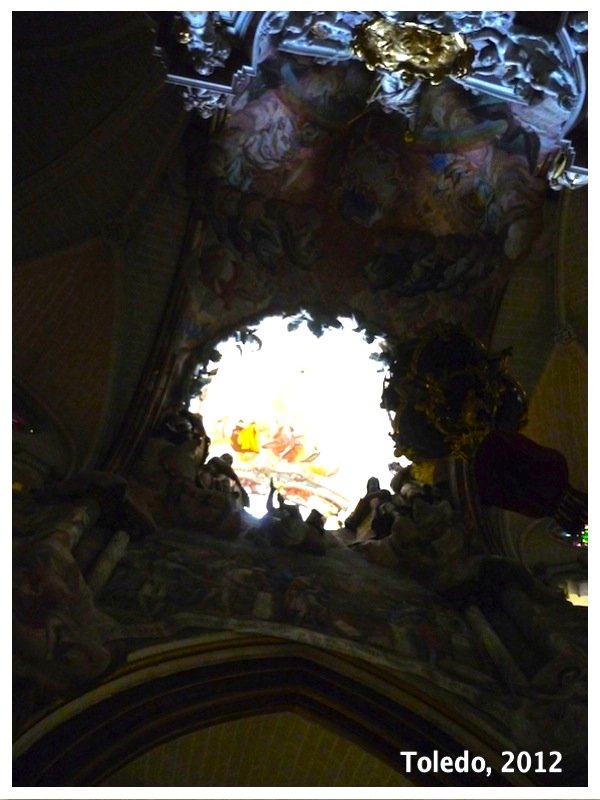 The best thing about traveling to all these places though, is the company of all my wonderful friends/hosts. Mathilde, a fellow student from Cambridge, shows me the beautiful cities of Bern and Geneva with bears (REAL BEARS!) and giant fountain Jet d’Eau. Danielle’12 and CJ ’13 showed me the cosmopolitan action-packed Madrid. Karolina, my Cambridge ballroom teammate, drove me around Vilnius and also took care of me when I had high fever and horrible sore-throat when I just arrived in Lithuania. I also had the chance to reconnect with my secondary school friends from Vietnam and my high school friends from Singapore, who are currently studying or working abroad in England and Europe. I even met up with a friend whom I knew from an international science fair in India five years ago! 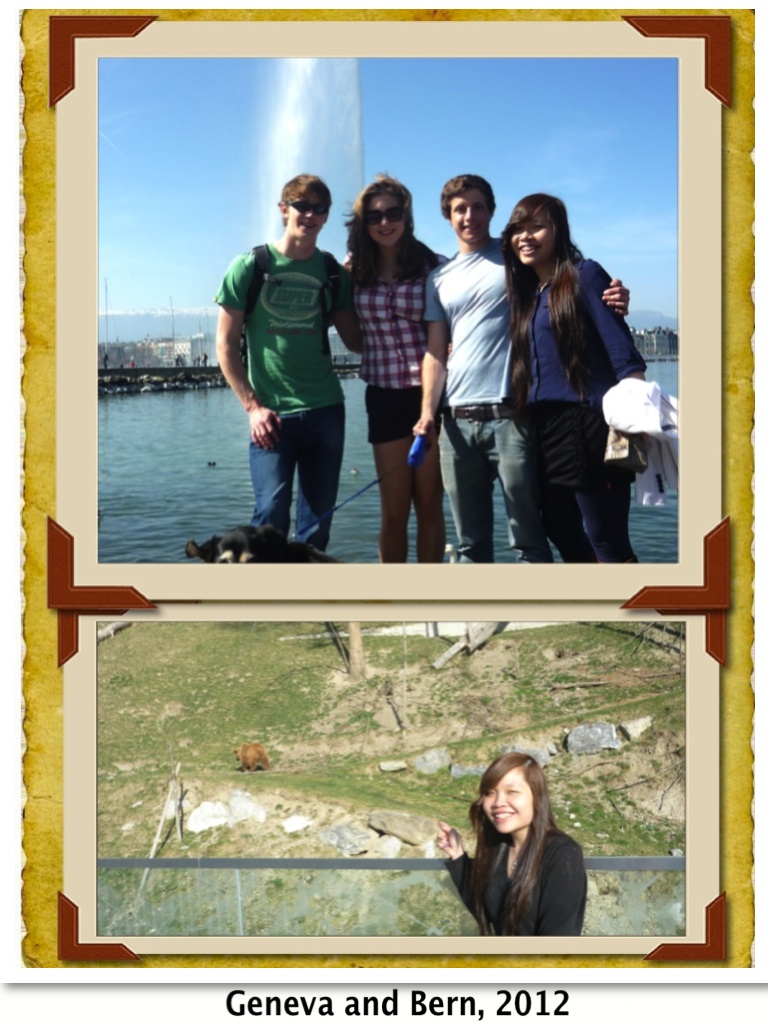 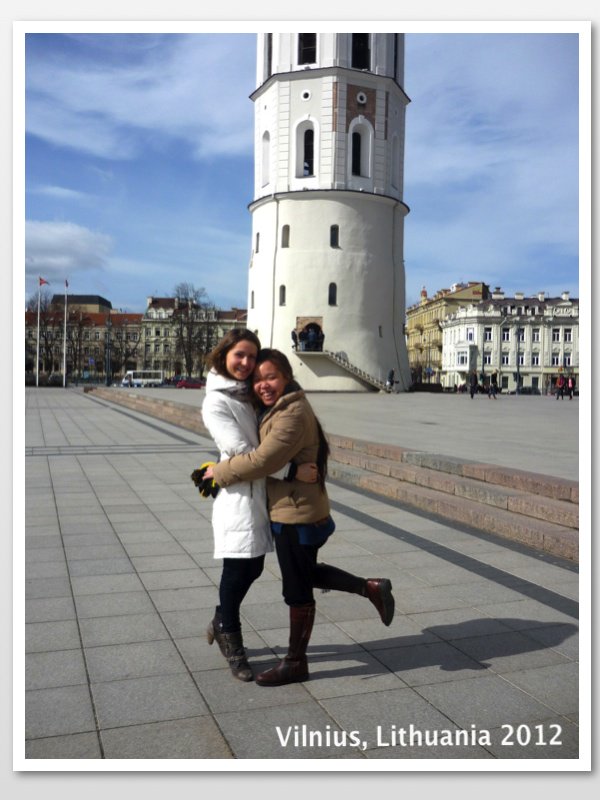 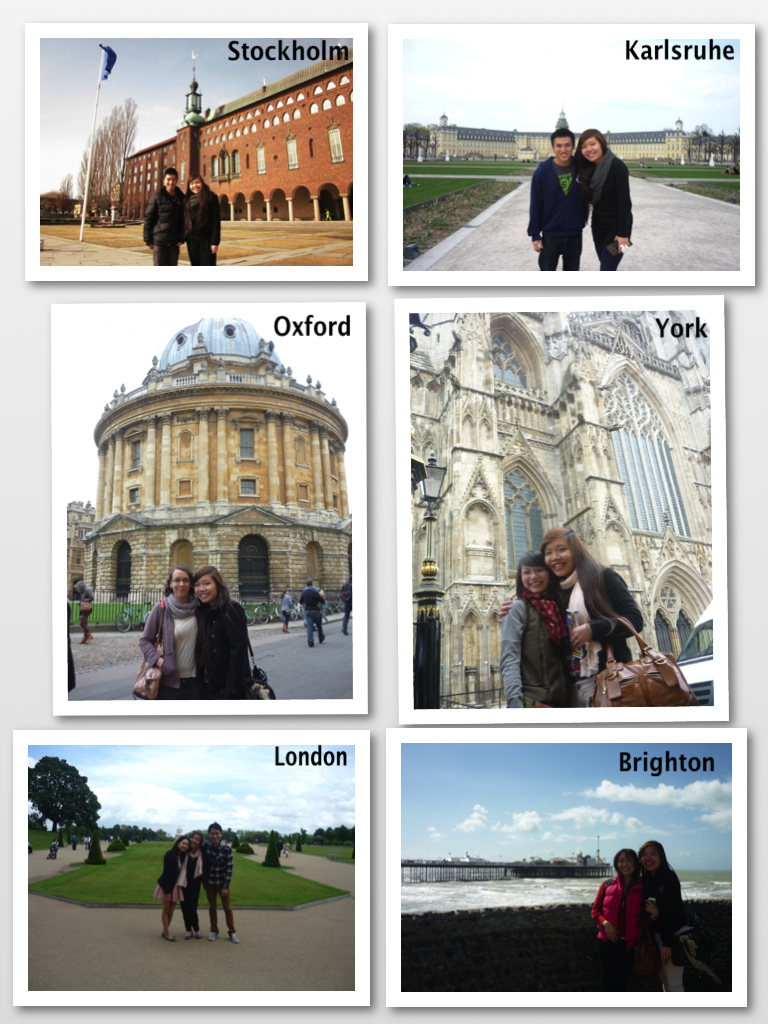 With all that said, I did think about MIT a lot during my stay in Cambridge. At the beginning of the school year, being away from all my friends and getting used to the new environment weren’t easy! I also received tons of emails of new exciting happenings at MIT that I would have loved to join but couldn’t since I was away.

What I missed the most is actually those late nights working together with my friends trying to solve a difficult problem set or to work on a group project. Such experience at MIT gave me a strong sense of camaraderie, mutual support, “we-are-all-in-this-together” sort-of feeling. Also it has created a close-knit and caring community who helped me overcome many obstacles during my first two years of MIT. At Cambridge, group work and group projects are rather uncommon; grades are determined by end-of-year final exams and the most important exam component is writing essays, a somewhat segregated process.

Another aspect of MIT that I missed dearly in Cambridge is the ability to do UROP/research during the school term. At Cambridge, it’s extremely rare for undergraduates to participate in a research project during term time. For me, such direct participation in the brainstorming and problem-solving process, as well as the opportunity to use cutting-edge technology in research, not only reinforces what I learn in class, but also fuels my enthusiasm for science!!! Furthermore, learning about my friends’ research projects, their ideas and insights greatly inspires and motivates me. They do some really cool stuff that I would love to talk about in future blog posts!

All in all, studying abroad at Cambridge is an unforgettable experience. It helps me gain new academic perspectives, appreciation for other cultures, and many amazing new friends! Thanks to CME, I also realize the different aspects of MIT that I appreciate and treasure the most. When my plane landed at Logan airport, I did whisper: “It’s home”