QUOTE: “I think MIT is the closest thing to Hogwarts on this planet…you’re taking all of these kids from around the country and the world…they’re all a little bit off-the-charts in one way or another. And you’re bringing them all together and they’re having this tremendous shared experience. It’s a magical shared experience.”

Some of you might wonder what I’m still doing here. It’s true, what am I doing here?.

I can’t believe it’s been one year already. In this intervening year, I evolved into a multiple choice test-taking machine, and already forgot what a pset looks like (don’t panic – take it from a reliable source that there is a life without psets :P). I also interviewed ten prospective MIT ’16s, and drafted ten passionate interview reports. It’s fun, and keeps me connected to that crazy Institvte up north. (I still remember writing this blog! time really flies – i’m still getting over the fact that i’m already at the other end of that blog)

I wanted to write this entry last year when I graduated, but somehow never found the time to do so. Now, on the eve of the ’12s graduating and after having one year to condense my thoughts, I hope to publish it (of course, with the blessing of the powers-that-be on MIT blogs).

This is a simple story of three guys, how they met, and the brief time they shared together.

I first met Steve at FLP (Freshman Leadership Program) during Pre-Orientation. FLP was a great experience – you get stranded on this island in Massachusetts Bay, have these counselors that play pranks on games with you, and generally spend a laughter-filled week before Orientation actually starts. Steve struck me as a quiet guy but I tried to connect with him a bit since I already knew that I was going to be living in the same dorm as him.

I lived in a triple during my freshman year (officially the largest room in New House, although my mom still balked at the size and the fact that I had to share the space with two other guys. i didn’t mind quite as much). I had officially secured the single bed by the window by putting my sleeping bag on it prior to even leaving for FLP (haha) but not actually staying there until right up to school started. I left Zach and Steve to fight over the bunk bed. I met Zach in the room – he initially got the upper bunk, but moved down to the bottom after realizing that Steve and I don’t usually sleep till 3 or 4 AM (and he goes to bed at 10). He proceeded to put sheets around the lower bunk, creating a tent-like coccon which he retreated into every night. 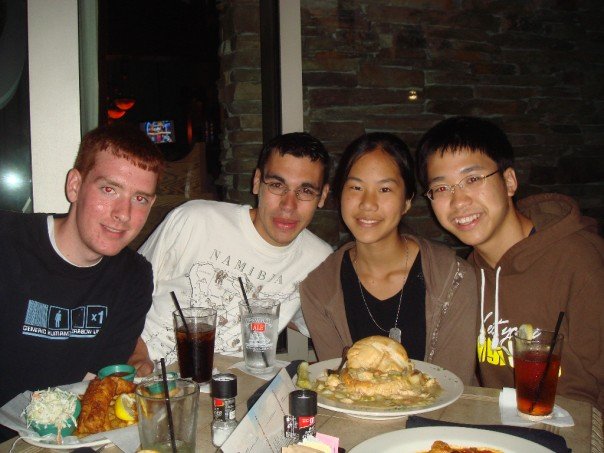 This was like wayyy back during Orientation, with Anna ’11 – we joked that we should take another picture at the end but we didn’t get the time to do so right before graduation and tell Anna about it. I just saw Anna two months ago when she visited NYC! 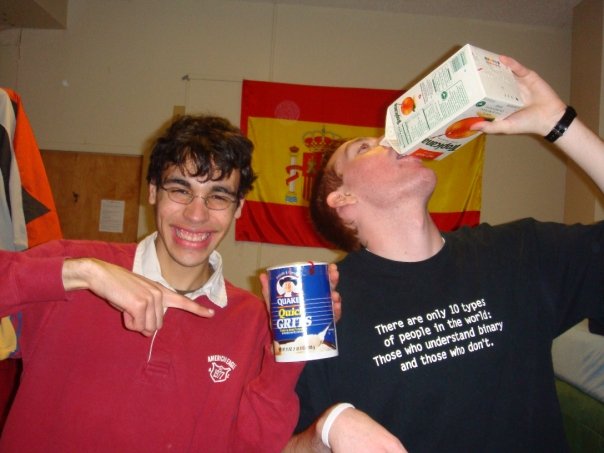 We had weekly brunches in our dorm, and for the freshman boys’ brunch, I contributed this excellent promotional photoshoot while they supplied the breakfast :P

At the end of the first year, we all moved into singles, but we never left the same dorm.

Over the next three years, I got to know Zach as a passionate violinist who combined his love of music with his (equal) love of physics. He would always invite me to his endless string of concerts and recitals, of which I have attended probably only two or three, sadly. 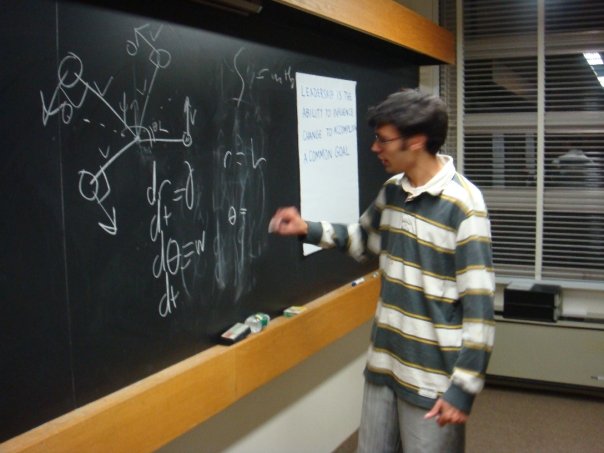 The man in action, teaching the freshmen (we were sophomores) the finer points of 8.01.

Steve morphed into a math genius, taking economics and math classes alongside each other. He has a talent for solving problems, and I can’t remember a time when he ever complained to me about a question being too hard (although there was plenty of it going in the other direction, lol) 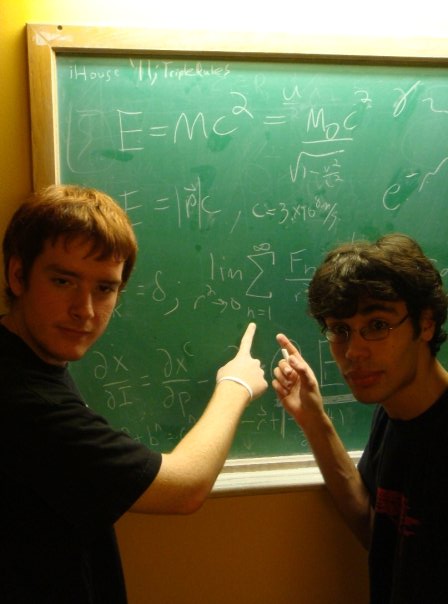 I had lots of American food (courtesy of them, since Steve doesn’t eat anything that’s not American and Zach has a marginally broader palate), which stretched my gastronomic preference quite a bit, haha. 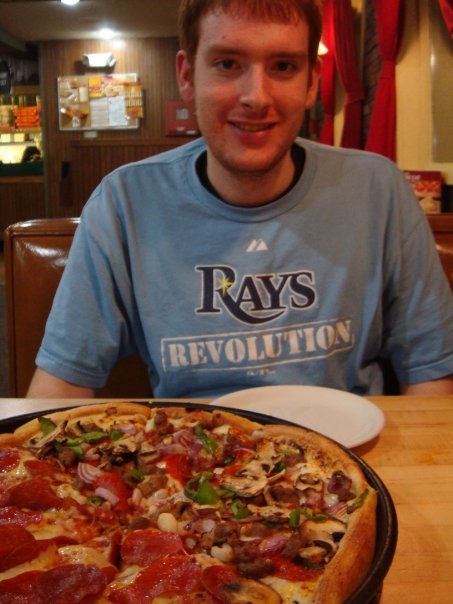 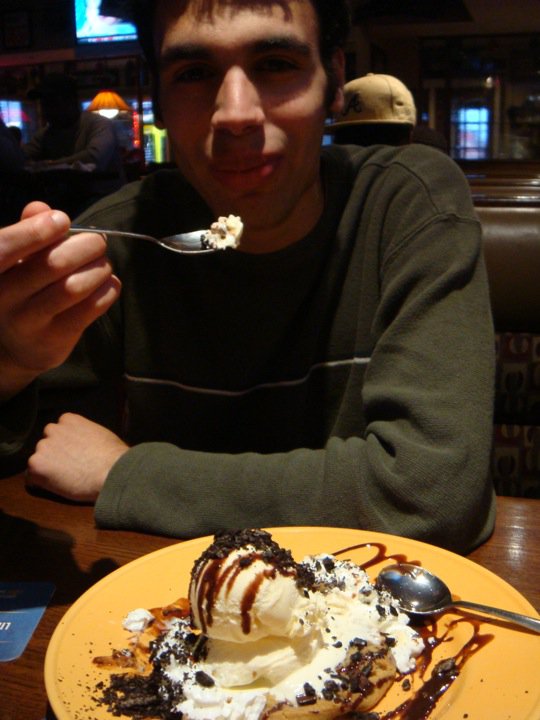 And so the years rolled on, and we found our own niches at MIT. One night sometime during our sophomore year, we were sitting around and talking about double degreeing at MIT, which would be a fun thing to do together before graduation.

(So at MIT, if you entered before 2007, you had the option of taking 270 units on top of your General Institute Requirements AND fulfulling the requirements of two majors to get a double degree, rather than a simple double major. This means you get two diplomas at graduation. Probably to decrease stress and unnecessary competition (or simply stupid people like ourselves, I guess), MIT removed the option beginning from the class entering 2008, effectively making our class the last class with this option possible – replacing it with a double major, where you get one diploma with two majors printed on it, but only with an extra 180 units)

Perhaps spurred on by this stupid idea of graduating each with two diplomas, we went on our own ways and really amped up the pace during our last four semesters, trying to fulfill this goal. Of course, it was fun when we were doing it and I got the crazy opportunity to write a history thesis (and thereby get my name into the MIT Library system, hehe), but I probably wouldn’t have been so motivated if it wasn’t for the prospect of us doing it all together. I took four history classes one semester (which meant well over 2000 pages of reading over the semester), which made me feel like this sometimes (x 2000):

As 2011 inched closer, we reminded each other to get in our petition forms, and it was exciting because it totally was coming true!

Finally, June 3, 2011 rolled around, and we took this picture after walking down the aisle: 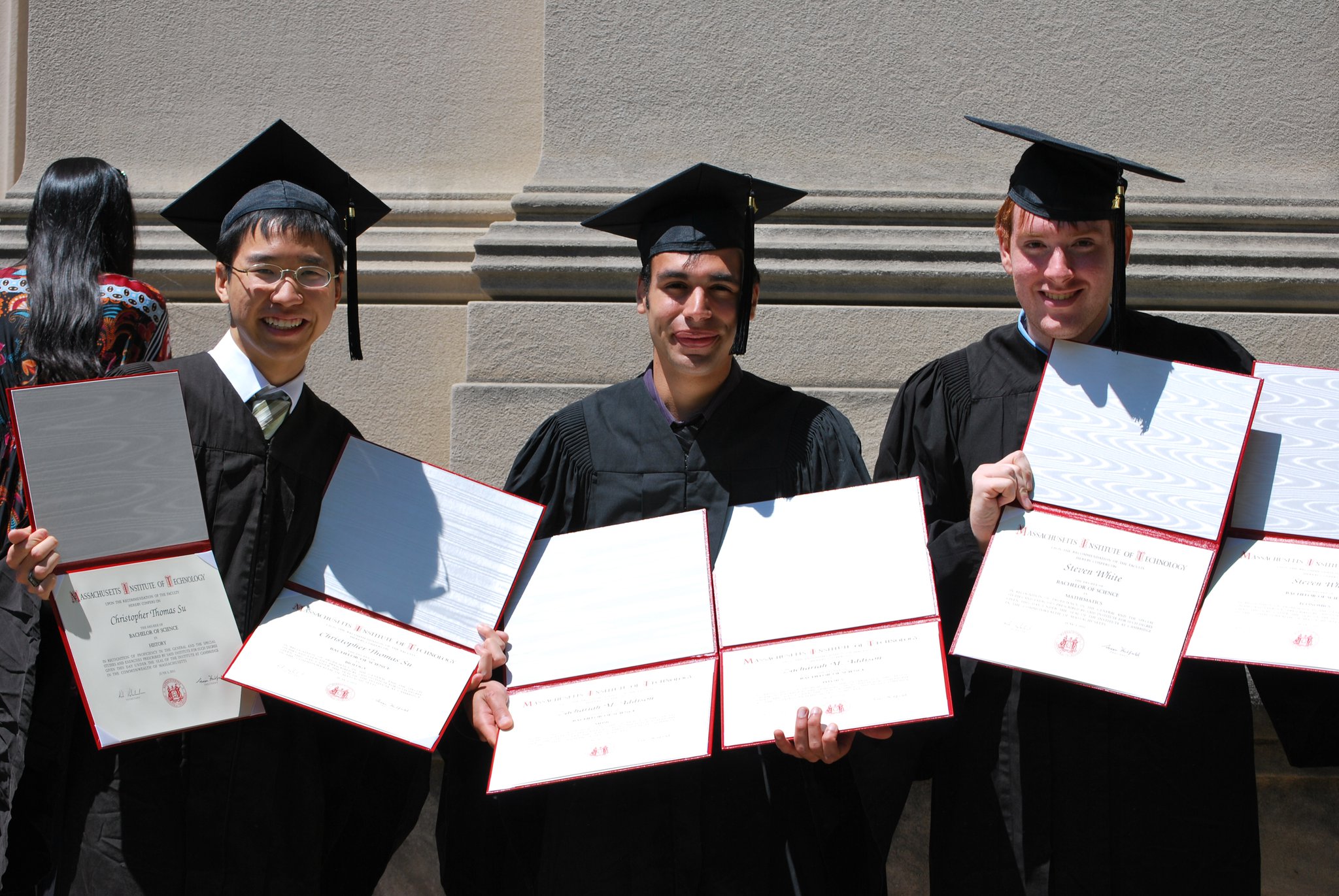 They say that there are some pictures where you’ll always remember how you felt and what the day like when that photo was being taken, and this was truly one of those moments. It was a moment of relief, a moment of celebration, and a moment of reminisce for all those nights when we:

+ Mario Karted
+ played AOM together in Zach’s room after working
+ drove in a Zipcar to this random place out in the ‘burbs of Boston just for some burgers
+ sat in the common room and watched the Dark Knight for like the fifth time in one year
+ were happy to have someone to talk to after a long day at school or a long bout with a particularly stubborn pset
+ made those spontaneous runs to MacGregor convenience for extra large bags of Ruffles Sour Cream (and only Ruffles Sour Cream)
+ (when I) asked Zach how to solve a 8.02 problem and Steve how to solve my math questions (which I still do with Biostats, like my email yesterday -____-)
+ (when I) complained incessantly to Steve while stressed out about my med school applications, and Steve running a regression on admitted stats to tell me that I shouldn’t hope for the HMS (he was right)

Since then, Steve has just completed his first year at Harvard Economics, and Zach is entering UPenn to study physics this fall after taking a gap year.

First year of med school is great and all, but there’s something magical about the many people you encounter on the way at MIT, just like Khan said. It is my firm (and often vocal) opinion that you don’t have to be particularly smart or even cool to become a doctor, but everyone at MIT is genuinely special. This is the reason why I enjoyed interviewing prospective students so much this year, because it gave me a chance of looking for that spark of energy driven by passion that I’ve come to see in so many of my peers during my MIT years. Even one year out, I’m only starting to see this even clearer than I did when I was a student.

Congratulations to the class of 2012, and best wishes for your Commencement coming up next Friday. It is truly a feat to have completed your MIT education, and although you maybe can’t wait till your life after MIT, I’d recommend taking this upcoming week nice and slow and savoring all there is to those numbered buildings and dank Athena clusters.

Trust me, you will miss being there soon enough :)