three things i made recently by Allan K. '17

the semester just started, but it hardly feels like school’s really in session yet. the snow’s only just turned to rain and we’ve had two snow days in the last week, which meant lots of indoors time. it’s kind of nice, really: mario kart in the lounge outside, teasing the hall cats, camping out in the kitchen warmth. everyone raiding the fridges for food.

i found a cookie recipe over the weekend that’s really working for me (it tastes like autumn), so here it is (mostly based on this betty crocker recipe):

Mix the sugars, vanilla, eggs, and applesauce in a big bowl until it’s homogenous and goopy. It’ll be pretty runny.

Add the baking soda and salt, then mix in the flour as well. Mix until it’s all the same color and consistency. It’ll be pretty thick.

Butter or oil a big baking dish (i use this one because it comes with a nice lid) and pour the entire thing in. Smooth out the batter until it’s evenly spread out in the dish. Use a knife to draw a pattern on top if you’re feeling fancy. 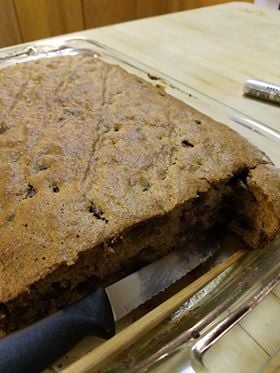 (shoutout to my mom, who taught me that you can use applesauce instead of butter so you can feel fancy and healthy too)

over IAP i took a class on software-defined radio taught by MIT Lincoln Lab. normal radios work by taking an incoming signal from an antenna and doing a bunch of fancy signal processing using analog electronics. in software-defined radio, that signal processing is done in software instead of hardware, which makes it easier to prototype lots of different radio systems without building an entirely new radio system every time.

that’s kind of the boring explanation — the more interesting part is that it makes it really easy for you to build radio receivers with a car antenna and a little USB stick called an RTL-SDR (which i think was originally hacked from a television tuner). it costs about $20, and (with the help of some free software like gnuradio), you can have a working FM radio in about an hour. you can look extra hardcore by displaying the frequency signal as it comes in through the antenna. people have also used these to pick up signals from aircraft transponders and track passing airplanes.

(in case you ever wondered what FM radio signals look like)

in the theme of communications systems, i’m also going to show off my final project for 6.111 (introductory digital systems lab) from last semester. my partner and i made a little communication system that exchanges text messages using an off-the-shelf laser. it does some simple error detection and packet acknowledgement too, so if you block the laser with your hand, the system will wait until the laser connection is unblocked and then finish transmitting the message. pretty cool stuff, and i got to implement some of the things i learned in my favorite technical class at MIT, 16.36 (communication systems and networks).

along the way we learned a lot about hardware logic, FPGAs, and verilog. turns out that specifying and building a hardware system from scratch is really really hard. it took a lot of scratch work just to figure out the basic architecture: 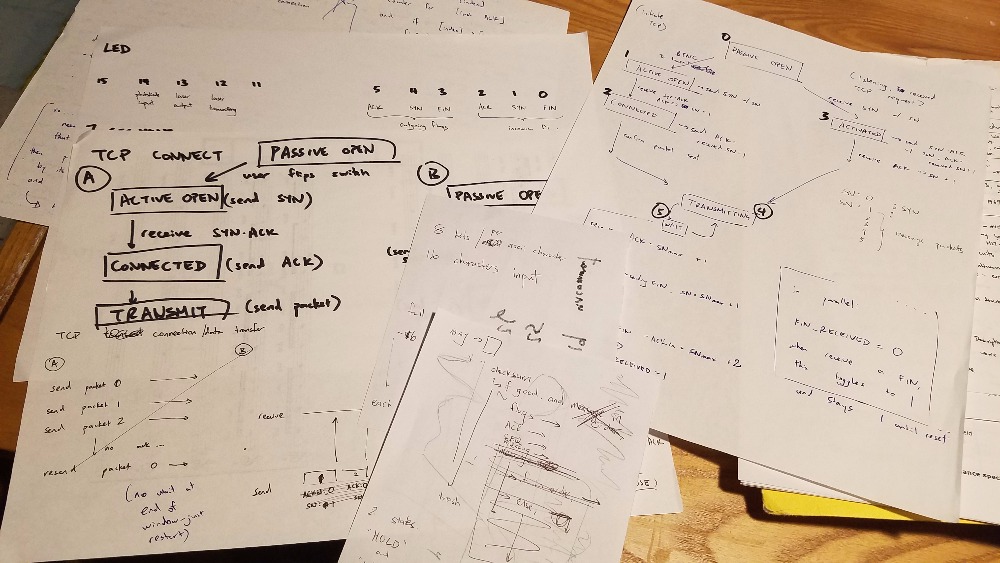 but of course, super satisfying when we finally got it working. check out our video demo:

here’s a picture of my desk: i’ve been listening to these two songs a lot:

i’ve been thinking about my social responsibilities as an engineer in the twenty-first century, reflecting on kate crawford’s “letter to silicon valley” (not fiction) and gideon lichfield’s “democracy 3.0” (fiction)

i went to a play a few weeks ago at the wellesley repertory theatre called “Emilie: La Marquise Du Châtelet Defends Her Life Tonight”. emilie du châtelet was a french physicist and philosopher who is generally credited for fleshing out the idea of kinetic energy in newtonian mechanics. she was also the first woman published by the paris academy (for a paper on the nature of fire), and her translation of newton’s principia into french is still the standard french translation used today.

i’ve been working on a new arrangement for my a cappella group. i just finished a book on the history of the apollo missions (written by an mit professor). i just started reading a compilation of essays about media infrastructures, edited by nicole starosielski and lisa parks (who is one of the new professors in the MIT CMS department). i’m thinking about these pictures of the internet as i read.

i watched a gorgeous animated film called the secret of kells. i went to ihop with a friend, and to taiwan cafe with some other friends, and a little while before that i celebrated chinese new year with a lot of my friends:

and the semester just started, and the snow’s only just turned to rain, and i hear people talking in the lounge outside. 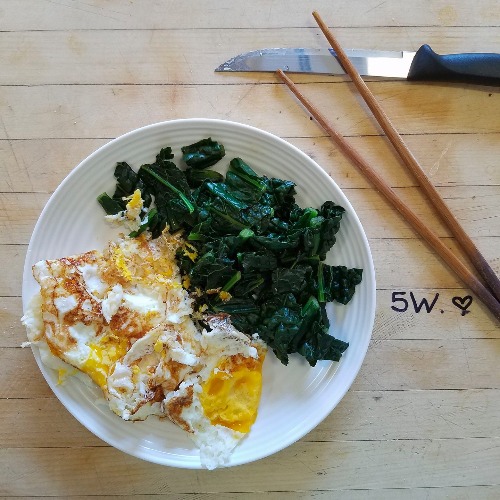