Friday evening, after getting one of the more interesting emails of this semester, I sat down with Benjamin Schreck, MIT senior and creative mind behind the Ben Schreck Shits wall calendar, which this year will feature idyllic MIT locations including the Infinite Corridor, Killian Court (with a view of the Great Dome), a lecture hall, an MIT professor’s office, a reading room where people study, and a sailboat on the Charles River.

Why?
It’s a fun art project. It’s tradition at this point, and getting bigger every year (this year is the third). Plus it makes people laugh, and we’re donating 50% of the profits to Doctors Without Borders.

Is this the first year you’re doing it on Kickstarter?
Yeah. In the beginning it was basically my money—my mom actually chipped in a bit. The first year was just one calendar, for my friend’s birthday. The year after, back home in LA, we were talking about how we wanted to one-up it. The next day, he found a toilet on the street a block away from his house. So we decided to clean up the toilet, which was also a photoshoot on its own, with hazmat suits he had lying around in his garage. Another friend joined us with a nice Nikon DSLR, and we drove around LA with the intention of making it a calendar.

It took us one year before it was released. Before that, in February or March my sophomore year, we applied to the McCormick art gallery. One of the shots got into the exhibit, and it was featured in McCormick Hall for about six months. At that point I decided I wanted to expand the idea and manufacture a bunch of calendars to sell.

Is it the same toilet this year?
Unfortunately no. The toilet from last year was broken into two pieces, and broke even more during the shoot. Also it’s back in Los Angeles in a dumpster somewhere. The new toilet is a fresh one from Home Depot. We upgraded from trash toilet to lowest price tier at Home Depot toilet.

So did you shoot initially with a toilet broken in two?
Yes. You couldn’t tell in the photos. There was a crack in the tank. If you look closely you would notice, but otherwise it’s not visible. We had two people carry it to the shoot, which I guess made it lighter.

What were the challenges this time around, especially with a whole toilet?
The biggest challenge this year was working with a whole team, more professionally. It’s a bigger operation now, and because we have a real professional photographer, he takes more time at each photoshoot.

How far in the shooting process are you?
We’ve done five or six—about halfway done.

Is it cold, sitting on a toilet outside?
Um. Yes.

What’s your favorite part?
I like the surprise when I tell people I’m doing a calendar called Ben Schreck Shits, and then seeing them laugh when they realize it’s a real thing.

Anything else?
I’m working with my roommate to bring Lil B to campus to give a lecture next week, and I’m trying to get him to be in the one of the photos. (He doesn’t know this yet.) So be on the lookout for that.

So who are you? What major? What are your interests?
I’m course 6, the 6-2 variant, which means I do both hardware and software. I’m really interested in entrepreneurship and music, and I was working in an early stage music startup over the summer, called TapTape, and I’m also a pole vaulter on the track team.

What other hobbies do you have, here at MIT?
I mentioned music. I play guitar. I’m also in a fraternity. Pole vaulting takes up pretty much all my time.

What’s your favorite?
I’m torn between 6.111 and 6.175. They use similar principles to do slightly different things. I really like learning about how big, complex hardware systems work, and especially the fact that I get to build those systems on my own.

What are you thinking about doing after MIT?
I’m going to do the MEng program next year. Currently I’m trying to find a project and an advisor. Other than that, I’m still trying to figure it out. I’m pretty sure I don’t want to work for a big company.

Will the calendar project continue?
Yes. It’s going global next year—or at least national, but hopefully global, with the idea of shooting in a different country each year. The longterm goal: let’s put a Ben Schreck Shits calendar in the Mars One project.

What advice do you have for prefrosh?
Don’t be afraid to deviate from the standard MIT technological path that seems like what everyone else is doing. Feel free to explore other parts of your personality, because you’re going to get enough of the technical side in your classes.

We then went to a hallway in the Z Center, Ben wheeled this year’s toilet out of the bathroom where it lives on a skateboard, and I took pictures.

The calendar is currently being shot around campus and is raising money through Kickstarter. If you’d like one, you can secure a copy through the Kickstarter. You can also donate directly to Doctors Without Borders. Here is last year’s August photo, the one that was featured in the McCormick Hall art gallery: 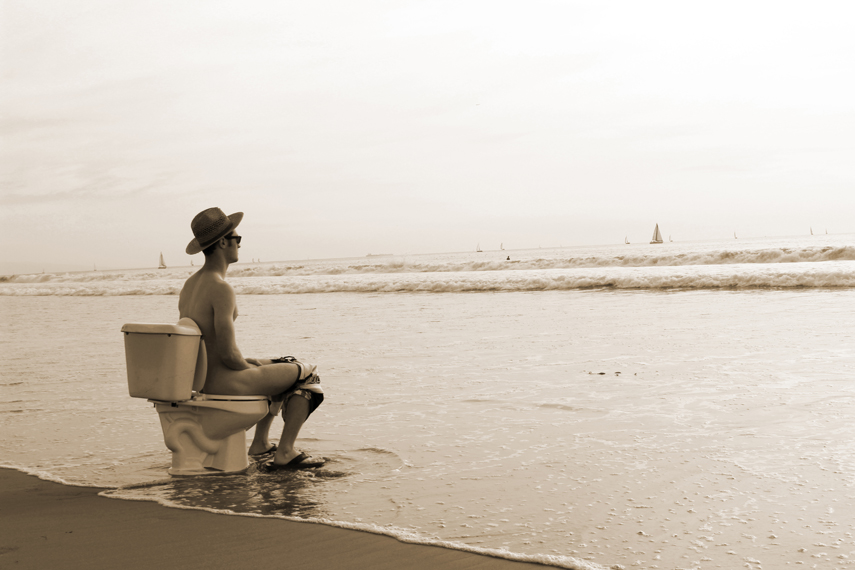