A lot of my time this summer has been spent in transit. I take the subway to and from work. I spend most of my free time wandering around the streets of NYC. I’ve made two weekend trips to and from Boston via the Amtrak train, and more recently a day trip to Providence, RI also via Amtrak. One day, it suddenly occurred to me that when I’m on a train, I could be doing something better than draining my cellular data and attention span on Instagram — I could be reading!

I’ve mentioned before that I suck at finishing text novels, but it turns out that I just haven’t picked up anything that resonated with me deeply enough. Until recently. With one hand wrapped around the subway pole and another precariously gripping Last Night at the Telegraph Club, I devoured the story of the Chinese American narrator figuring out her queerness in the setting of 1950’s San Francisco. My stomach churned her sorrow and joy and love until it thoroughly mixed with my own. I felt full.

During my Amtrak ride from NYC to Providence, I started reading Stone Butch Blues as a pdf on my laptop. I finished the first quarter of the novel before my laptop died (and I had forgotten my charger). I was secretly relieved as the story was starting to settle inside of me like concrete; it was becoming very heavy and likely best consumed in multiple sittings rather than one. For the rest of the train ride, I just stared out of the window, letting myself take whatever train of thought arrived at my mind’s platform.

I like the sky. No matter how fast the train was whizzing by the trees of Connecticut and the harbors of Rhode Island, the sky’s infinity was steadfast and unbothered. The sky that day was not in a hurry: the clouds drifted lazily across the sky at an almost imperceptible pace. If I reflected upon the first half of my college experience by focusing on the trees and harbors, all I’d be able to see would be the hazy blur of frustration, panic, and exhaustion. But if I stepped back and looked at the sky instead, I could see progress. 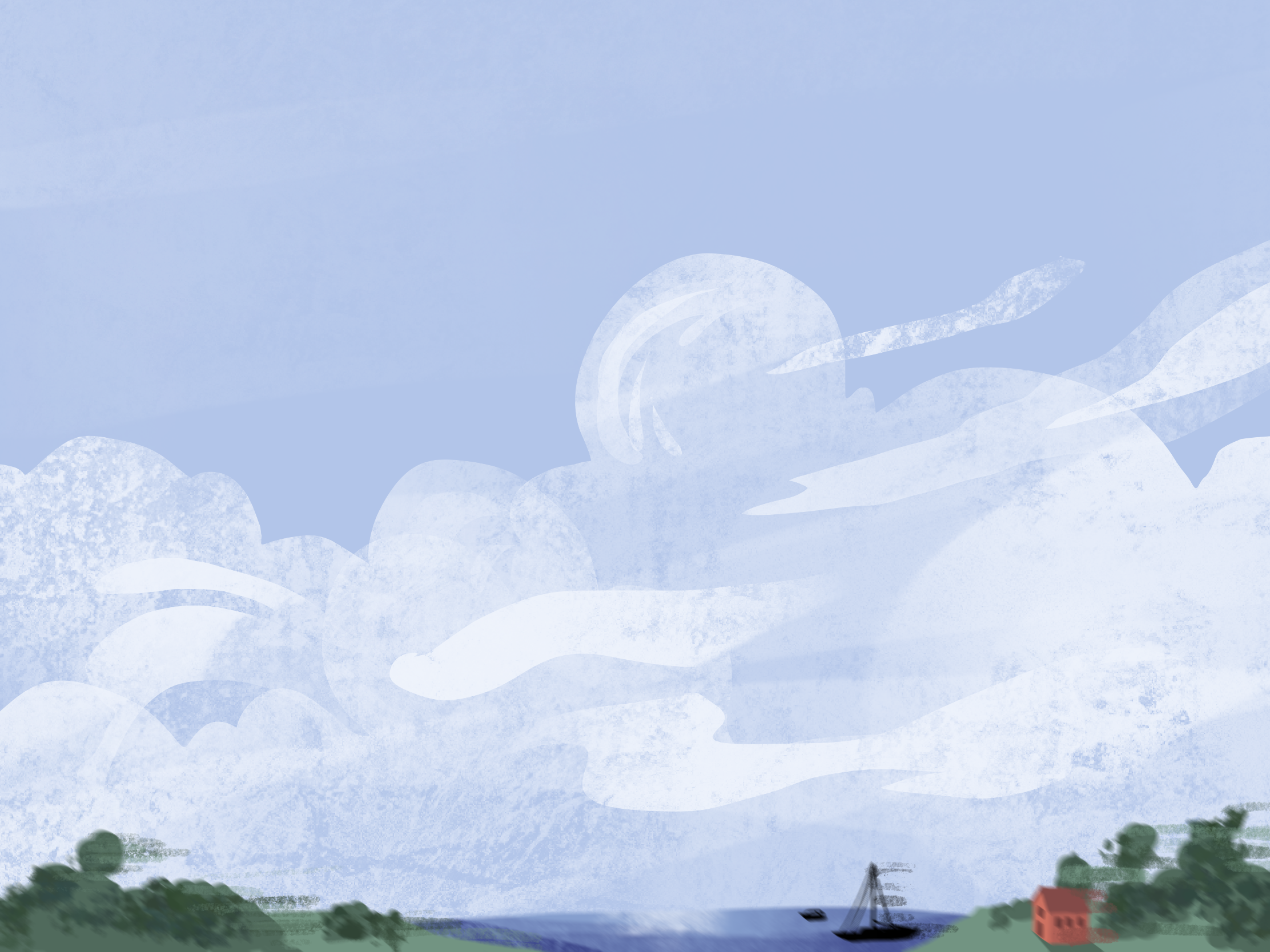 My mind hopped on and off many trains, but this transit system coalesced into one major destination: I want the capacity to feel deeply.

Progress usually entails something becoming better or stronger, like honing your skills or raising your self esteem. But right now, I think it’s progress just to realize this. Maybe it’s a glaringly obvious one, but it took me a lot of thought to fully believe it.

I’ve always loved art as a kid. Of course I loved making pretty things and drawing pretty pictures, I also loved to tell stories through illustrations and comics. As a high school junior trying to put together a supplemental art portfolio, I tried very hard to make art through which I was saying something “meaningful,” whether it be about my feelings, identities, or perspective on the world. Personal is probably the better word here than meaningful, since I don’t believe in there being such a thing as meaningless art. Trying to make personal art required a lot of thinking and feeling.

When I started MIT however, art became more of a temporary escape, a relatively brainless distraction from things that consumed me like psets and research. I just wanted to see pretty paintings of clouds instead of two column latex documents, so my art became less personal and more aesthetics-driven. Not that it’s a bad thing or that aesthetics-driven art is lesser than; I needed breaks and making impersonal art gave me those breaks.

On the Amtrak, I realized that I basically never got such large swathes of time to feel and think deeply at MIT. When you’re in a constant state of hosedness, you tend to harden. You literally don’t have time to cry. This fucking pset is due in an hour. Maybe you’ll crystalize into a diamond, glittering with accomplishment. But more often than not, you realize that your diamond is actually just tempered glass, manufactured to be tough and sturdy and to have your tensions and compressions balancing each other out in the most delicate of equilibriums until just the tiniest crack shatters your entire self into a billion pieces.

That’s a very melodramatic recap of what last semester felt like. This summer I think I’m finally sweeping up the pieces, hoping that I’ll be able to smooth them into sea glass in the following semesters. Reading regularly and getting to witness the vibrant art, poetry, and theater scenes of NYC is making me want to make personal art again. Of course, this doesn’t have to be the same kind of art I made as a high school kid, but I want the capacity to really let feelings marinate and to transform them into something beautiful. Instead of being the 9-5 worker who hides behind screens during the workday and seeks the stories of other artists as an afterhours escape, what if I made a life out of telling my own?

To clarify, I am not saying that screens and coding and art are mutually exclusive — all the DALL-E memes scream that they aren’t! I also think that working a conventional 9-5 job is valid as something to want for yourself. It’s an option that I’m considering for what I want to do straight out of college, but I just don’t see it as enough to (metaphorically) make me full in the same way that Last Night at the Telegraph Club did. Neither am I trying to romanticize the life of an artist; your livelihood depending on a constant stream of creativity and feelings leaves you more prone to burnout.

Which leads to the fact that sometimes, feeling hurts.

And suddenly my heart hurt so bad and I realized how long it’s been since my heart felt—anything.

I’m grateful that I’ll likely never have to fully experience the immense pain narrated in Stone Butch Blues, but swallowing those words led to a reflux of some aches that I had long buried within myself. Some of those aches were from general MIT related burnout, but last semester made me realize beneath them laid some deeper issues. I’d only dig those out during the few therapy sessions I managed to schedule and rebury them as soon as my hour-long session was up. I had no idea that therapy would hurt, almost as much as the issues that made me go in the first place. I was told that’s how you know it’s working. Why must hurting be the prerequisite to healing? On the Amtrak, the aches left my mask soaked with tears, but it’s been a while since I last thought and felt this deeply.

In Providence, I hung out with my high school friend who now attends art school. I’ve never seriously considered art school, but lately I’ve been thinking about what kind of person I would’ve been if I had gone to art school, or literally anywhere that’s not MIT. I don’t think I necessarily would’ve been happier, as I would’ve just had a different set of problems to deal with. But I’m fairly sure that I’d have more time to feel.

I can make more time to feel, despite all the expectations here to fill up your schedule with diamond-forming heat and pressure. I’ll punt more psets, take fewer classes. Unlike every semester I’ve been a student at MIT so far, I won’t UROP this coming fall. I’ll go outside more, even if it’s just to watch clouds inch across the sky. I’ll make art whose meaning stems from feeling. I’ll seek stories with the same determination I’ve sought out source code. Gradually, because passion thrives on feeling, I’ll regain my passion for science that drew me to MIT in the first place.

Before hopping on the return Amtrak to NYC, I bought a copy of On Earth We’re Briefly Gorgeous. “I’m in a touchy feely, sad boi hours kinda mood,” I told my friend who I had dragged to the bookstore. I threw myself into yet another excruciatingly heavy story, whose prose lodged in my throat as jagged shards. But bit by bit, they blurred into beautiful sea glass the color of trees and harbors, until I felt as full as the brilliant strokes of clouds brushed bold across the setting sky.