Tweaching and Stitches by Chris M. '12

Two things that happened this week, one of which I liked.

I’ll be honest with you––actually, brief aside here, have you ever heard someone tell you that they won’t be honest with you? It makes me laugh to think about someone paradoxically telling you with all earnestness that they’re about to lie to you. Any robot readers heads have  just exploded.

Anyway, as I was saying, I’m going to be honest with you (and redundant, apparently). When school starts back up it’s like a whirlwind of activity happening all around you. There’s seemingly a quintillion things to be done, and walking around campus is not unlike walking around a 3 ring circus, except instead of elephants,it’s nerds; acrobats, calculus; and confusingly just as much juggling.

But one of my favorite parts of the new school year, aside from seeing all the new, wide-eyed freshmen and hearing about their struggles to choose housing, majors, and classes; is the blogger get together known in all it’s syntactically misleading glory as:

(Even though we’ve had one every year for a few years, I suppose it’s supposed to signify the first one of the new academic year.)

The blogger meetup came about because once upon a time, Meet the Bloggers, the CPW event, was also a Meet the Bloggers for bloggers. Until that point, a lot of bloggers never crossed paths because, let’s face it, MIT is a broad and deep place to be immersed in, and many of us are busy looking at our shoes as we walk.

So to remedy the situation, bloggers would meet together at the first of the year to talk about how to make blog posts, the few guidelines we have about making posts, and to meet the new and senior bloggers. This year’s festivities sounded especially exciting: trampoline dodgeball.

You can read more about the events that transpired from Elizabeth, but I’d like to share with you one interesting fact about the evening. I managed to, in all my sensibilities, split my chin open during a match. Against my own knee. Yes, I’m so manly that I beat myself up. I actually didn’t notice until Snively yelled out “Um. Someone’s bleeding…” only to look down and see a few small puddles of blood, and then notice a few smears of blood on my clothes. Oops, so I ran off to find just where I’d sprung a leak and was greeted by this lovely sight: 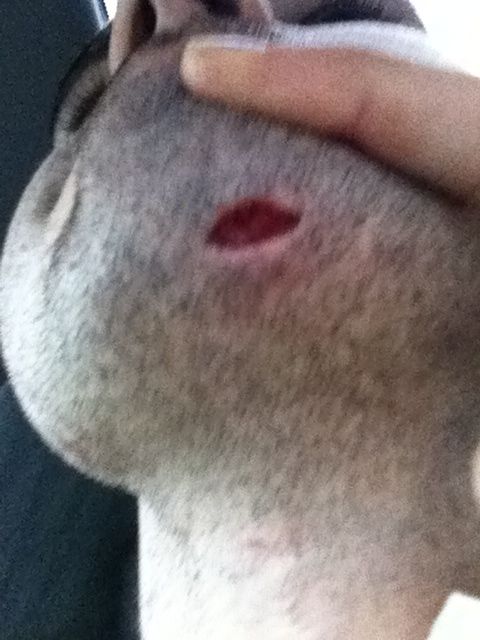 Horrifying isn’t it? And the wound is kind of gross too. Needless to say, a split chin is the torn ACL of competitive blodgeball, and my blossoming career as a dodgeball player was over.

I was still kind of bleeding a lot though, even an hour later when I got back to campus, so I texted the above photo to two nurses I know and asked a poignant medical opinion:

The answer was a unanimous “yes.” Followed by a eerily similar “what did you do?”. I suppose a correlation could be drawn about the thought patterns of nurses, but I’ll need more data.

Heeding their advice, I figured I’d stop in at the Urgent Care clinic to see what they thought. When a nurse came in to see me and asked what I was in for, I cheerily replied “oh, I cut my chin a little and it seems a little borderline for something more than a bandaid, so I thought I’d see what you think”. I showed her my wound, which was unsurprisingly met with a “what did you do?”, and followed with a chuckle and an exasperated “men and their sports” at the explanation.

The first attempt at patching me back together was to use medical grade superglue called Dermabond to glue the wound back together, but as it turns out, my 5 o’clock shadow was preventing it from adhering properly, so stitches it was. 3 to be exact: 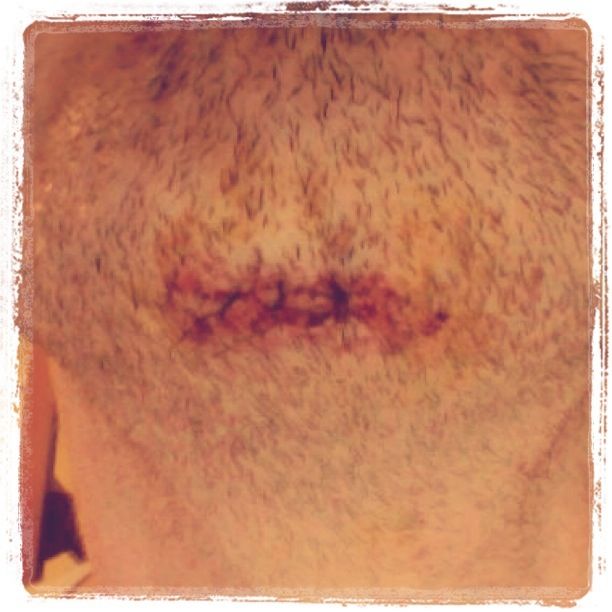 And with that, I was on my way. All in a day-before-class’s work I suppose.

Oh, and as an aside, my professor in 6.02 (Intro to EECS II, electric boogaloo) has adopted a method of teaching with twitter he calls “tweaching”, wherein you can post question with a specific hashtag, and they show up on his twitter account during lecture, which he’ll then try to answer. I find it very clever, and rather MIT like.

9 responses to “Tweaching and Stitches”