On Friday, October 24, the Edgerton Center at MIT organized an on-campus premiere of the documentary Underwater Dreams. The film follows the journey of four high school students from the Arizona desert, who in 2004 won an underwater robotics competition, defeating MIT’s stellar team.

None of the winning team’s members were legally documented in the United States.

I’d love to tell you that the film has a happy ending, in which the boys’ successes get recognized and their talents get directed towards society’s good…

Sure, the members of the Underwater Robotics team were hard-working and ingenious. But they lacked one special paper. They were not allowed to advance.

They did, however, inspire a generation of other undocumented engineers to strive for a greater goal. Now, children once carried stealthily across the border are taking action and coming out as “Undocumented and Unafraid.” They are determined and brilliant.

Some of these Dreamers are students at MIT. Recently they petitioned to form DreaMIT, an on-campus organization that would aim to bring together the school’s undocumented students as they face unique challenges at MIT.

Dreamers can continue their studies in the U.S. thanks to DACA (Deferred Action for Childhood Arrivals), which is a temporary designation, subject to renewal every two years and only in effect for the duration of President Obama’s presidency. One of the students’ top goals is to win the legislative fight for the expansion and permanent implementation of DACA.

To describe these students’ courage is an impossible feat. I still remember the sheer terror of waiting for a Permanent Resident status. I had discovered an abundance of opportunities in the U.S. and was dizzy with excitement. But that wondrous source of vitality could be cut off at any time, for on paper I was an “alien,” and I had an “alien number,” and my fate was at the mercy of a single USCIS officer. If I had to return to my homeland, I would lose a new life.

To even imagine what the undocumented students must feel is painful. To hear them speak about their status and try to improve something, if not for themselves, but for the two million other Dreamers struggling to succeed, is beautiful.

Directly after the viewing of Underwater Dreams, the MIT community got a chance to hear from the Dreamers and their supporters in a Q&A panel moderated by Professor Phillip Clay.

One of the speakers was Junot Díaz, a professor of writing at MIT. As a child, he arrived undocumented to the United States from the Dominican Republic. Since then, he received numerous literary awards (including the prestigious Pulitzer Prize in 2008) and the MacArthur “Genius” Grant. Professor Díaz was also listed among New York Times’ top 20 writers of the 21st century. He is now a U.S. citizen, but maintains ties to the past by serving his community both here and in his birthplace.

There were also two MIT students (one a sophomore majoring in Aerospace Engineering and another a Master’s student from the Department of Urban Studies and Planning), and a young woman who had studied at the University of Massachusetts briefly before new legislature made it impossible for her to cover the increased cost of education. All three were fighting for a chance to remain in this country without fear. Mary Mazzio, the writer and director of Underwater Dreams, came to support the immigrants as well.

“What gives you courage?” questioned a member of the audience.

“My parents. They came to this country to give me a greater opportunity. Their courage is very significant. After that, how can I give up? How can I stop just because someone is telling me? There is no option to stop,” the sophomore panelist described his source of strength.

“I do this for my sister because I don’t want her to go through the same depression and struggles,” responded another Dreamer. “You learn about the power of people in college,” she continued, “Youth are a critical component to change.”

“My greatest fear had already come true,” added the young woman whose family was recently deported, “The courage to come out was the breaking point of anger.”

Amidst the struggles and fears, the Dreamers highlighted positive change. They have made strides in the immigrant movement, and now hope for increased community civic engagement. The Dreamers’ support system grows strong.

Bonus: Here is the recording of the panel from the MIT Underwater Dreams premiere (it’s almost like you were there!). 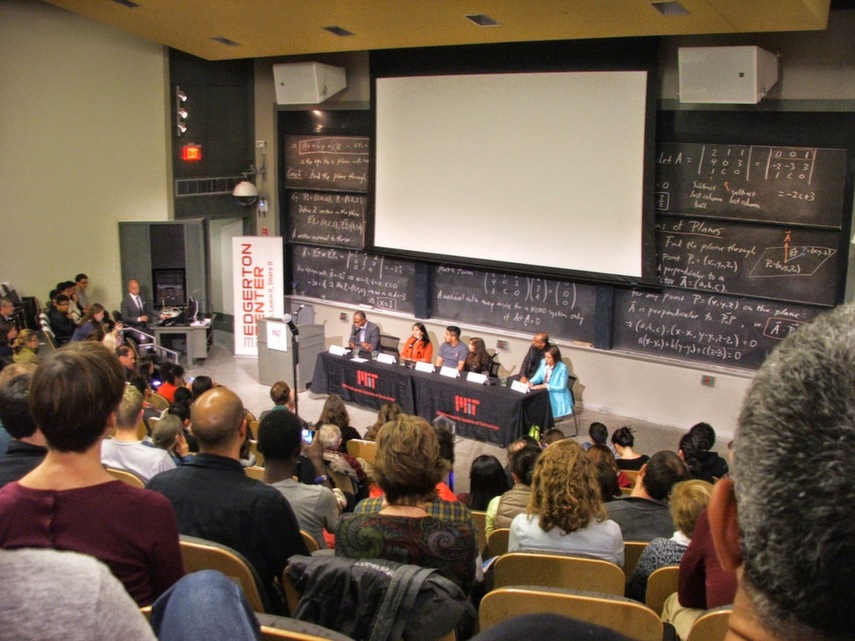