1. When will the snow piles melt?

Bragging rights to whoever gets this right. Specifically the snow piles in front of 77 Mass Ave.

Once upon a time a few weeks ago, campus was a tame soon-to-be snowman’s nest. 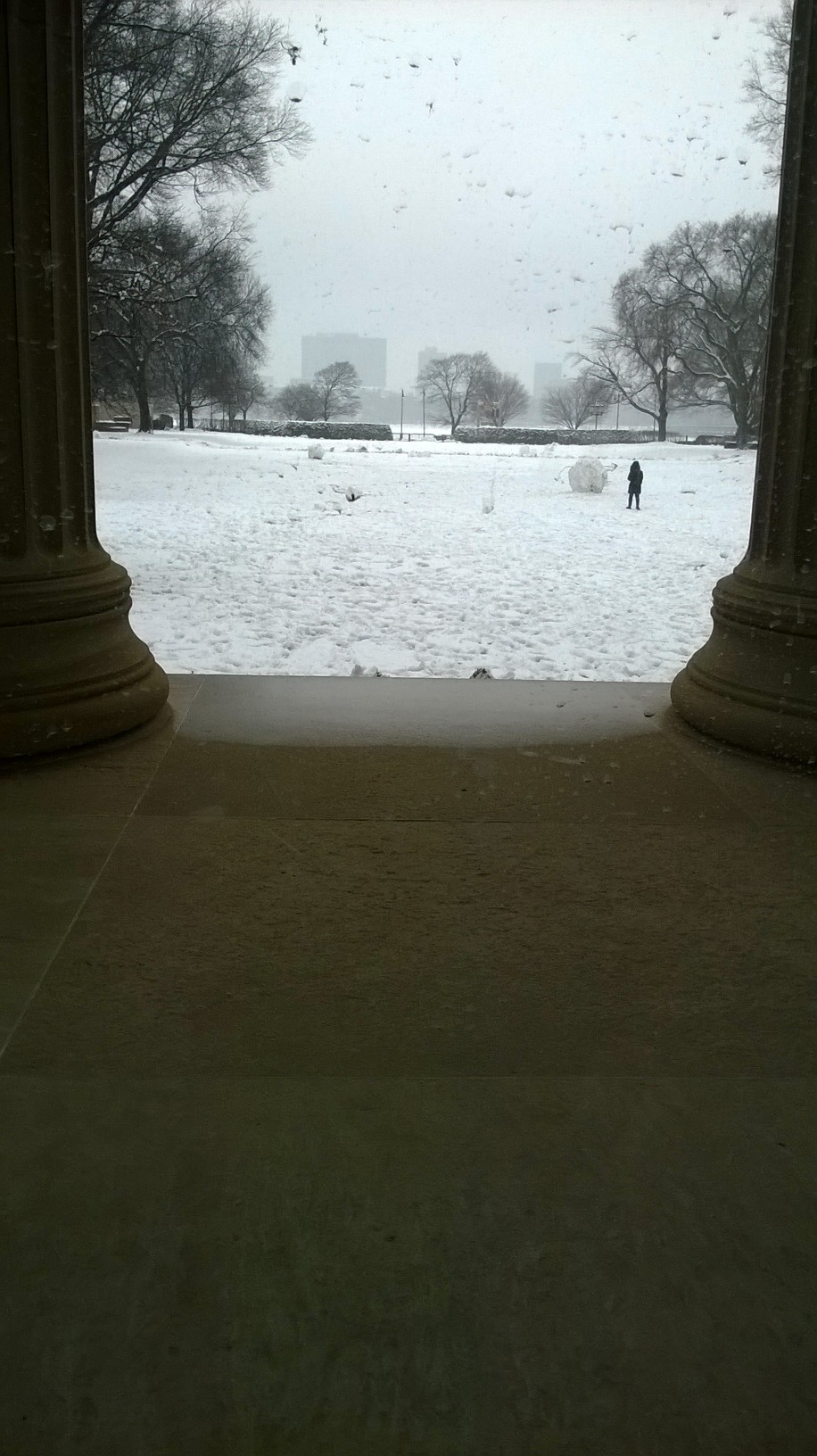 Now, I’m stuck in the AXO house in Boston, where I live. A few weeks ago it looked nice… 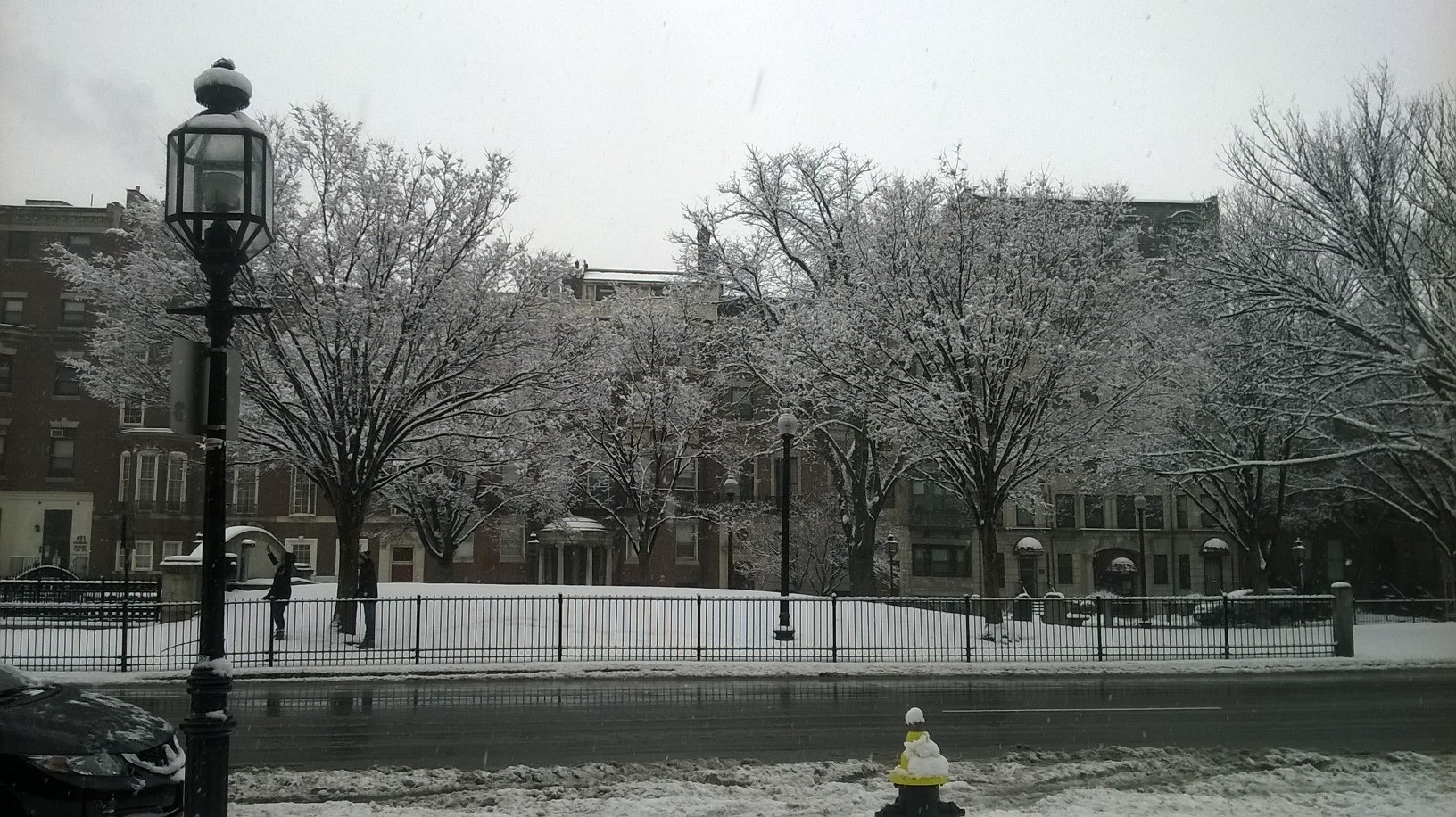 Alternate question: Where did the river go? 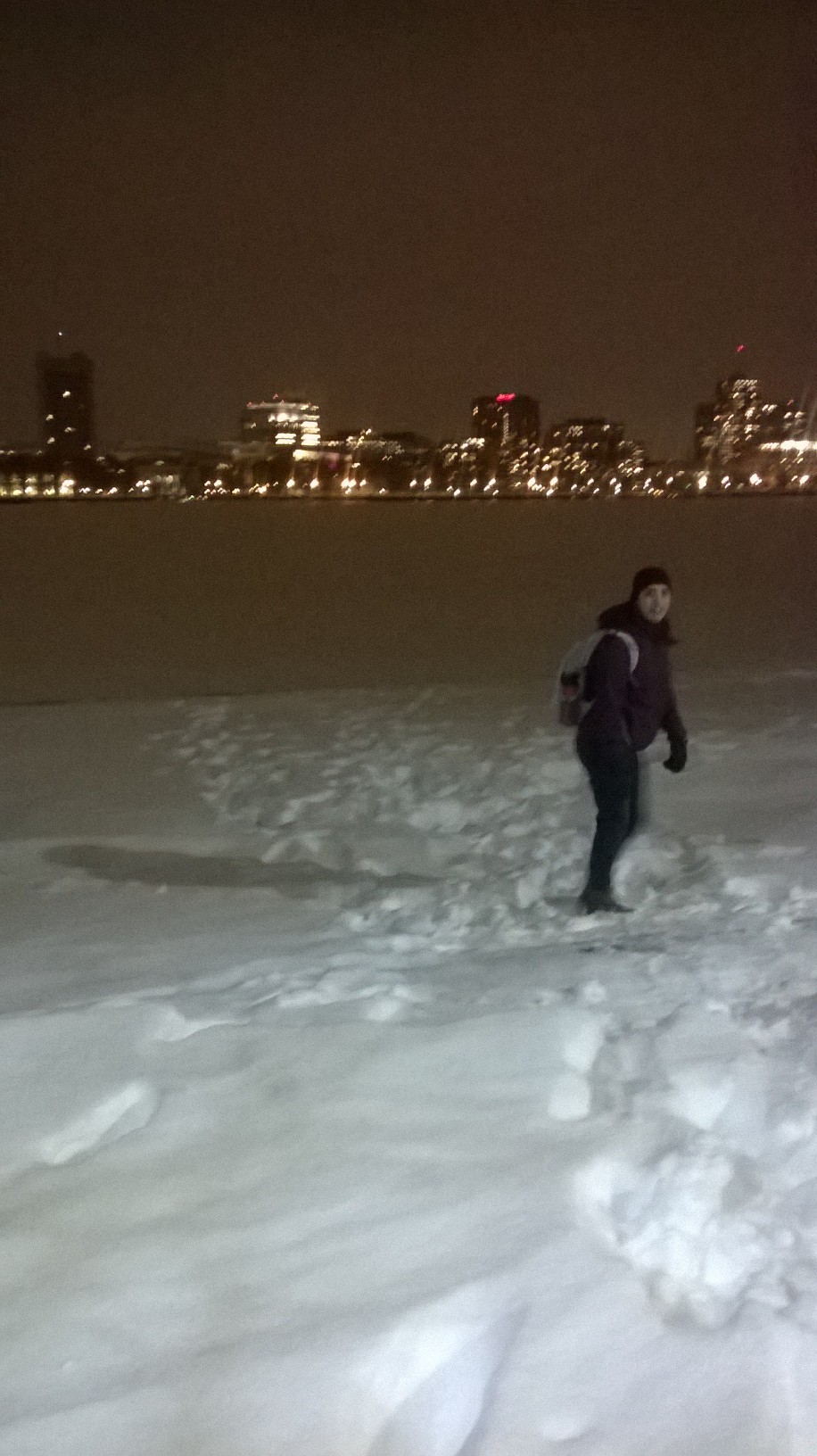 And now, well…I’ve been in the house for a while. That is the view from my 4th story room.

Serious question, why is there a golden droplet at the end of the icicle? (Fun fact: Icicles form because sunlight shines on snow, it melts, and drips down, but by the time that happens it’s less so in the sun and re-freezes.)

See the building in the picture? Yes. Your eyes do not deceive you. Those are 3-story “icicles” stemming from the gutters. 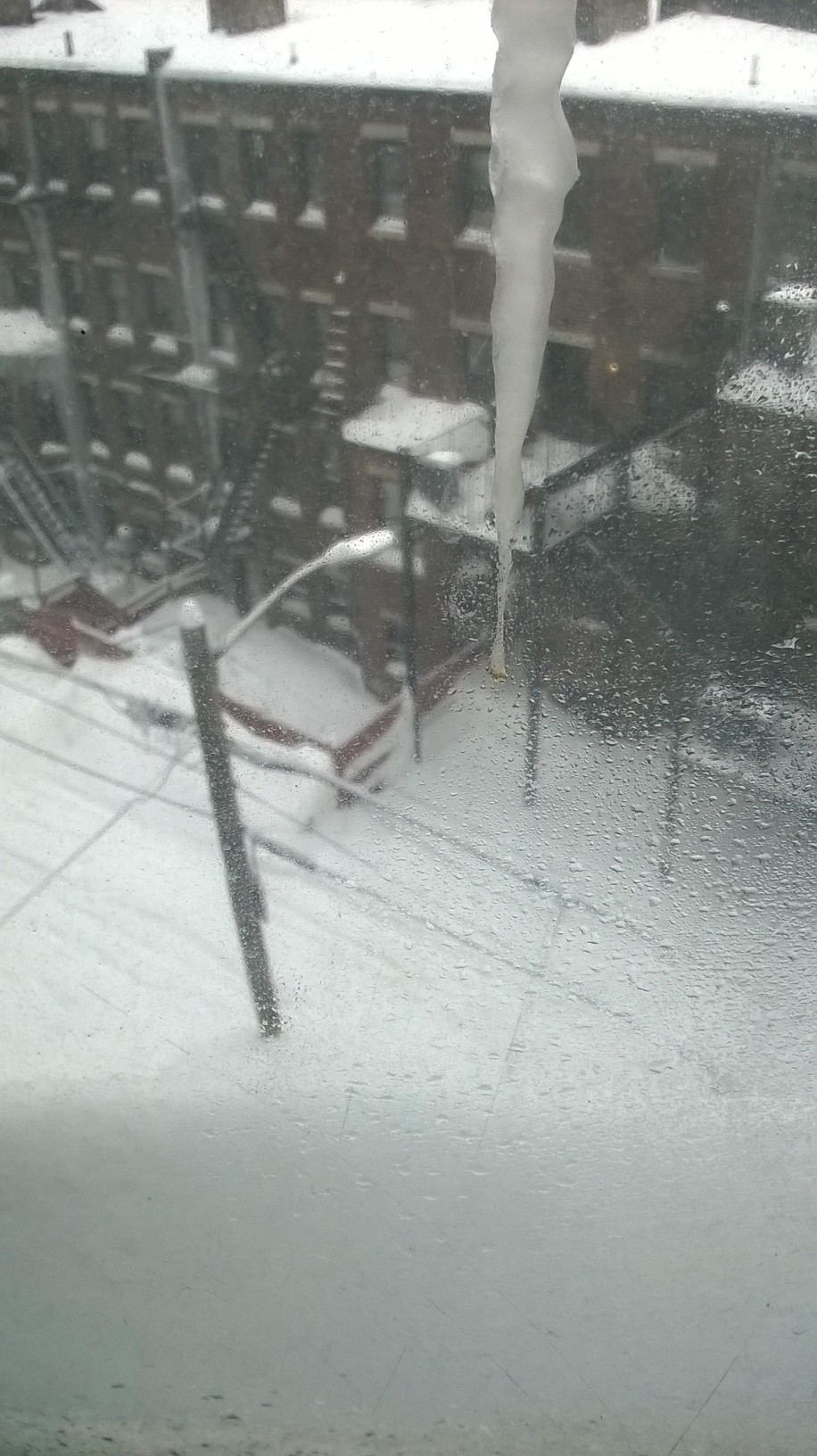 My guess is going to be May 1.

2. Is that Marco Antonio Solis? 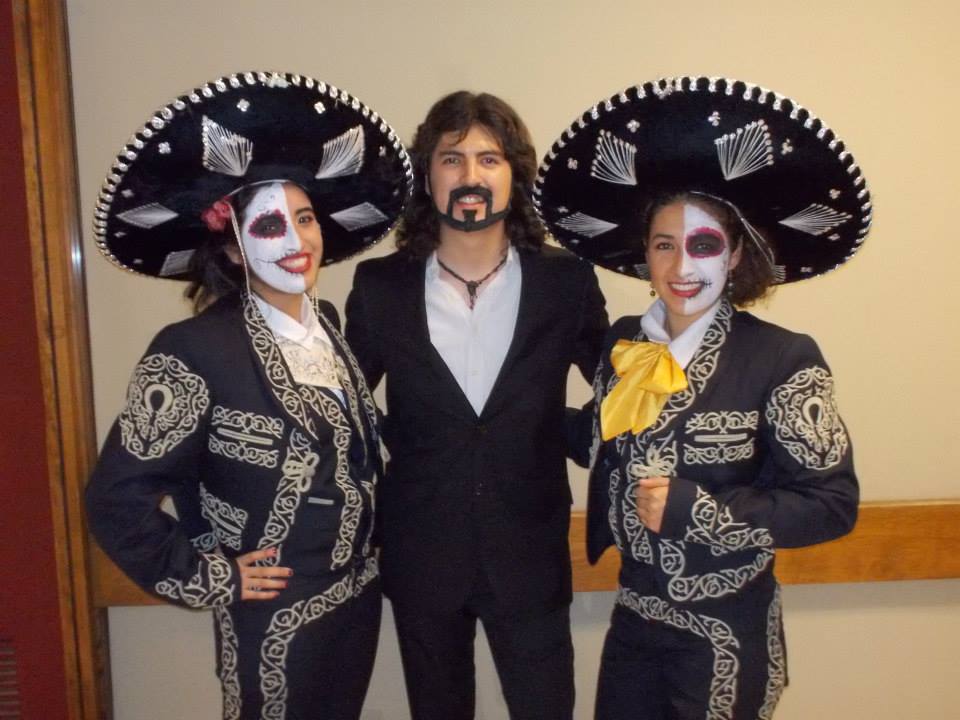 I went to a costume party on Halloween hosted by Mujeres Latinas and saw these people. I consider Marco Antonio Solis to be the Mexican version of Chuck Norris. This was admittedly a long time ago, but that encounter made me too happy and sometimes I still wonder.

If you thought Halloween was a bit of a late mention, a whole year ago, Kristine K. ’14 secretly wrote Grace, our then graduate RA a couple of urgent letters from her future self. 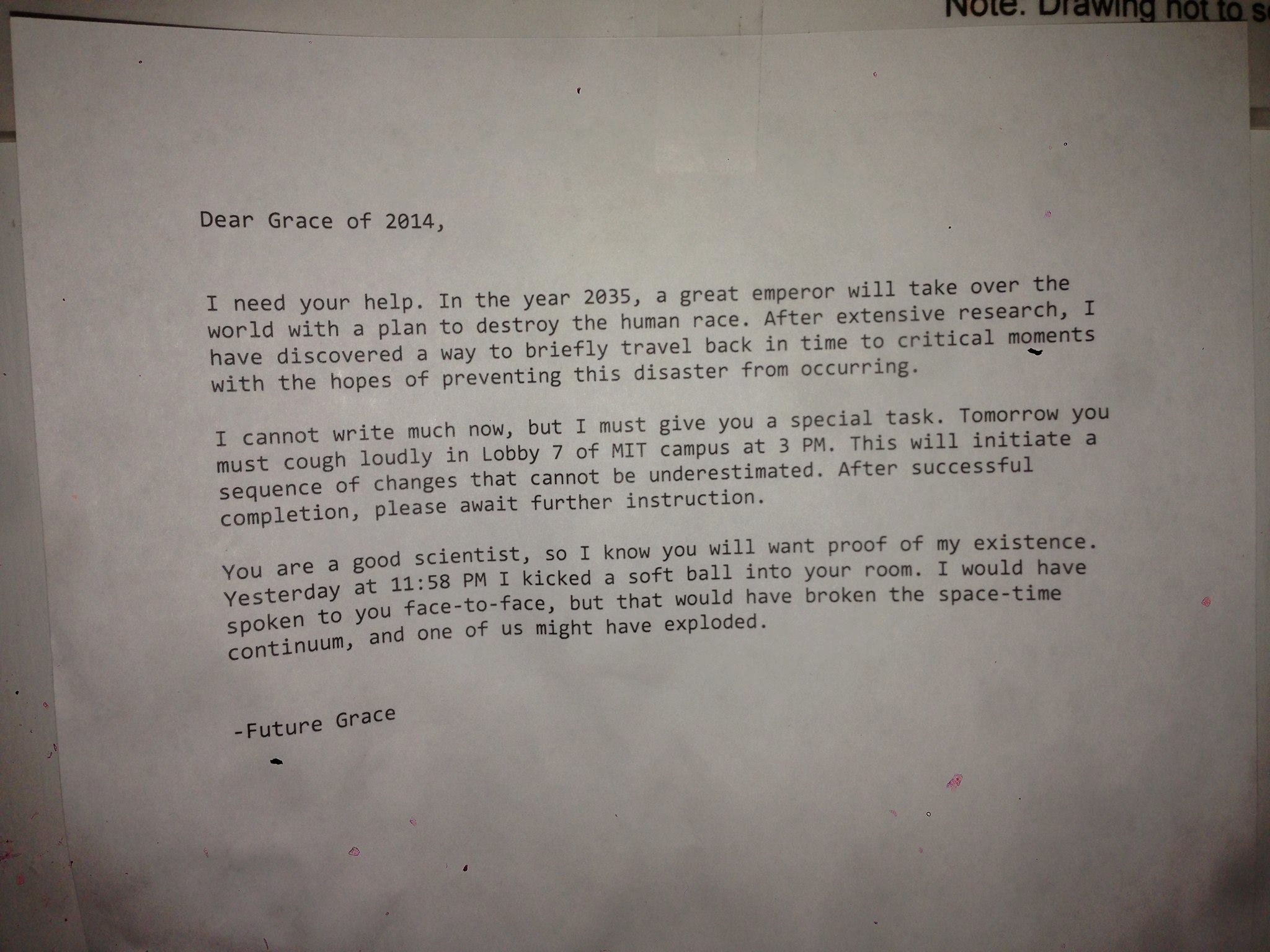 I should have been in Lobby 7 making sure she coughed loudly enough. 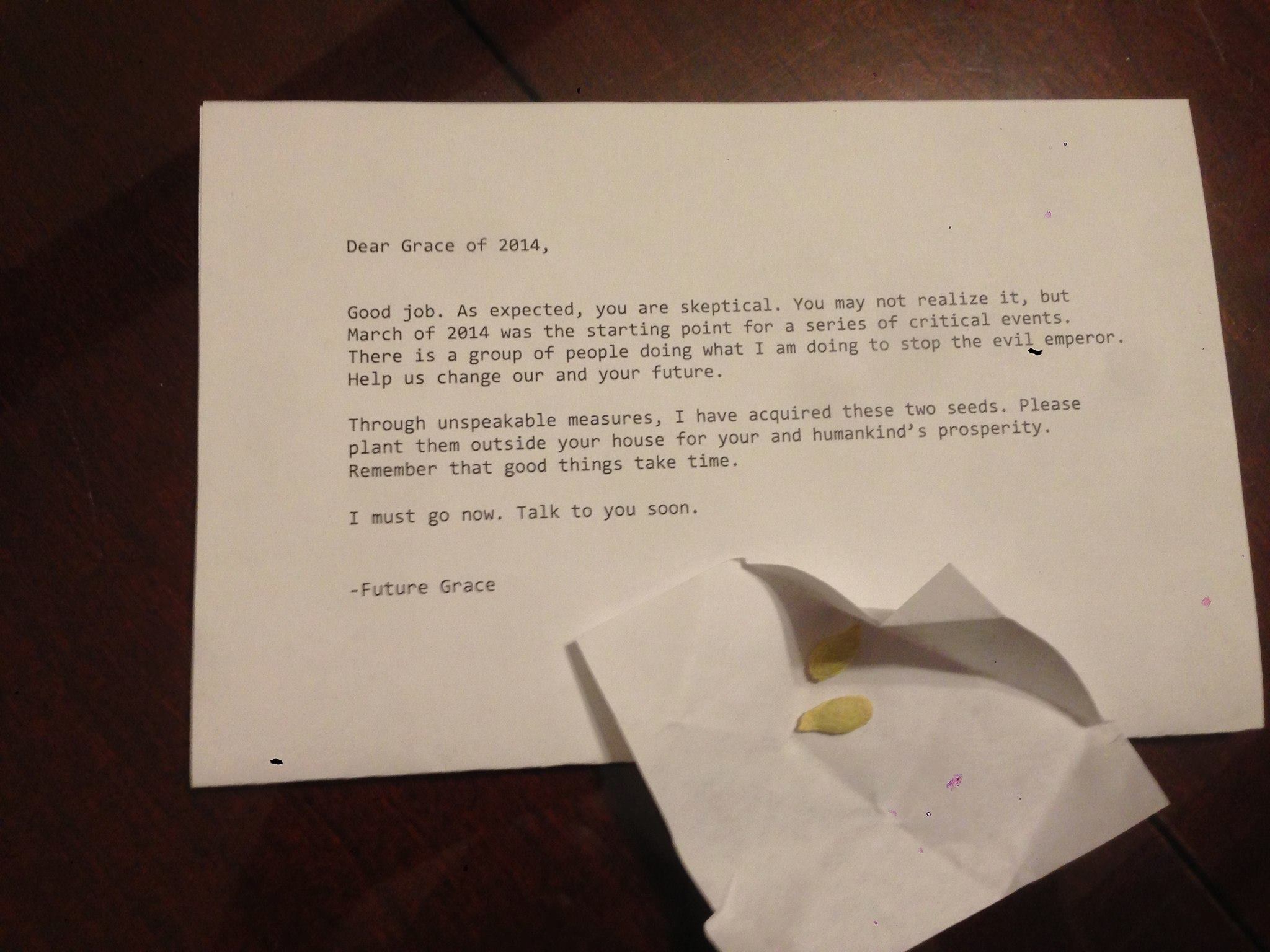 Did she plant the seeds? If not, I suppose she has been helping the world in other ways. Kristine is in med school now, so if humankind doesn’t necessarily prosper, she’ll be able to help humankind not die?

4. Does a snowman need to have 3 snowball parts for it to be a real snowman?

Mystery Hunt = SO MANY UNKNOWNS

I had known about mystery hunt since freshman year, but it wasn’t until this year that I joined on a team. (And by join a team I mean spend much less than a day out of the three days allocated attempting to solve 2/20,000 puzzles.) The winning team of the last year’s hunt prepares the puzzles and hides a coin somewhere on campus. For some of the puzzles, the first challenge is trying to figure out what kind of a puzzle it even is! After solving a disney music song-themed puzzle, we were asked if we wanted to build a snowman to move on with the puzzle. Which we did. It would have been a trivial task now, but a couple of weeks ago our snowman resources weren’t as blossoming. 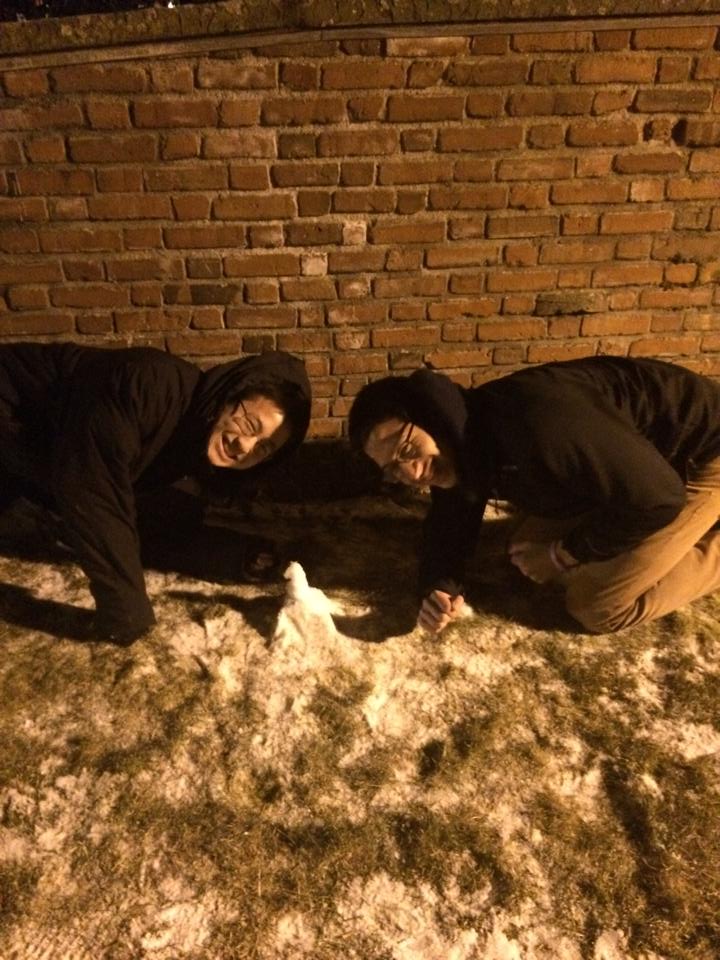 The box contained chocolate coins (which I ate, even though it was probably a puzzle) and YOU GUESSED IT!
More. Puzzles. 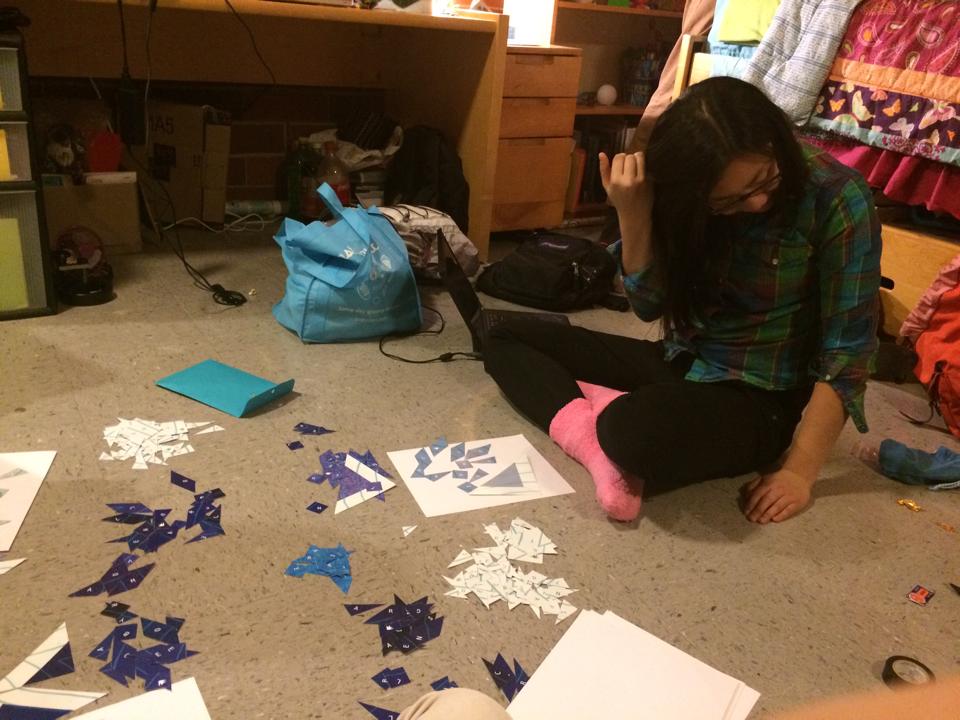 ^+1 to whoever can identify this blogger :)
I swear my friends aren’t weird. It’s just that one of the puzzles glowed in the dark! 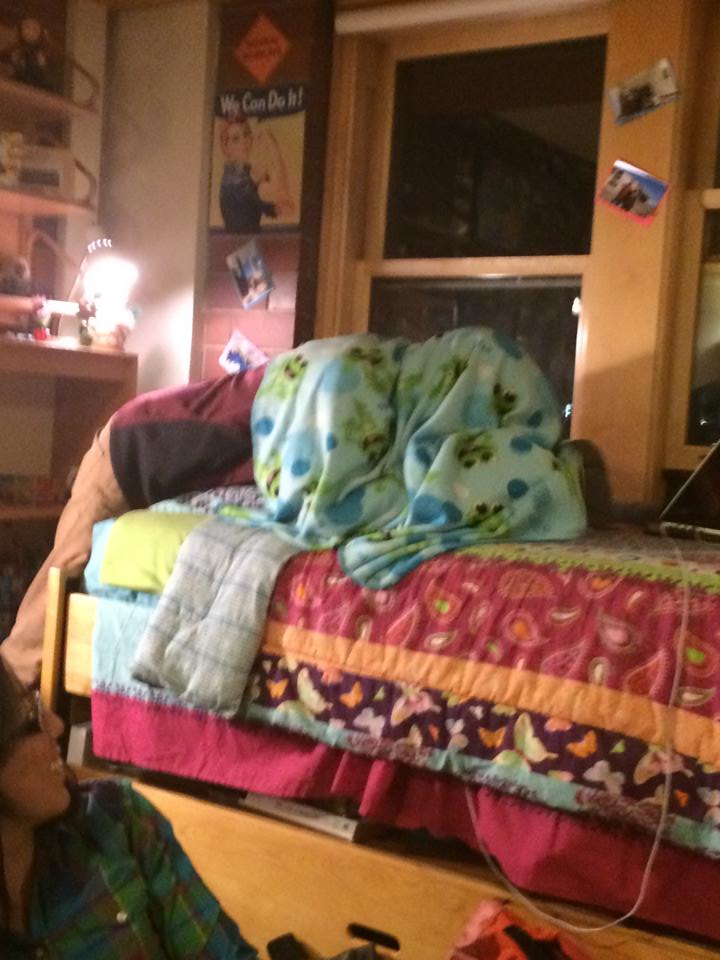 5. Will there be completely autonomous airliners one day?

In October, Aero Astro had a Centennial Symposium, celebrating 100 years of the department’s existence.

I had lunch with astronauts, and listened to Elon Musk (who as my fellow course 16 Maritsa ’16 put it, “is cooler than the pope!”). 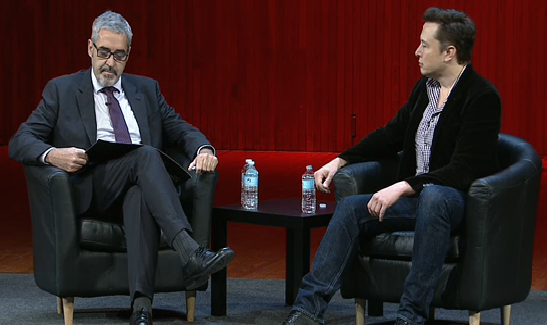 Fun Fact: The Aero Astro department at MIT has been involved with every major aerospace acheivement in the history of aerospace.

Back to the question, though. Will there be planes that people board with no pilots in them?! As was mentioned in the symposium, “The problem of autonomy is the problem of living in an uncertain world.” How do you make systems that are so robust that can handle all kinds of uncertainty, not just limited to nature’s? How much of the world’s infrastructure will change in another 100 years? How much can it?