Things that greatly enhanced my chance of survival quality of life at MIT, and lots of sketches.

At the start of the semester a close friend of mine gave me her loft. It was a big, nervous change for me because I am not only change-averse but also terrified of heights, but it turned out to be a fantastic idea. Different dorms give different levels of control over furniture. If you can, I recommend you loft your bed, and loft it high. My fear of heights—at least, the height of a loft—evaporated within hours. When I moved my head, my room to my right swayed with me, and so did the world four stories down at the open window to my left. I was terrified at first, but some time passed and I didn’t die and I wasn’t scared anymore.

Sleeping in a loft has several benefits. First, I don’t have a bedside table or shelf, which means I can’t bring my laptop or a book to bed unless I want it to fall out the window. Sleep ends up separate from everything else, which I’ve heard can help a person fall asleep faster. Second, since I sleep next to an open window I get a cool breeze at night and the light of the sun in the morning. Every night feels like camping, and I usually wake up without an alarm between 7:30 and 8:00. The result is regularity in my sleep schedule. Remarkably I’ve started feeling rested on seven or eight hours of sleep, which never used to be enough. A third, unexpected benefit is that I start every morning panicking about which direction I shoved my plushies in my sleep. By the time I scan the alleyway four stories down and find them on my bedroom floor I’m usually quite awake.

Under my loft I made a cozy space that is also isolated: it has a window, some plushies, including my giant turtle, and a small shelving unit with yarn, my Legos, and only my favorite books (science fiction and a population genetics textbook—no GRE prep book). There’s a green curtain I can pull across the loft to block out the rest of the world and a touch lamp shining into the cave. It’s become a happy childish shelter from stressful reality. 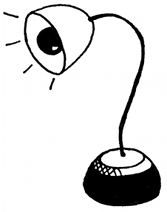 There are a few other simple, mostly inexpensive things I’ve accumulated over the past two years that have greatly enhanced my quality of life at MIT.

I spent my first semester crammed into a small half and I handled the situation all wrong. I tried to make a second story by lofting a queen sized airbed on a lofted bed frame and a shelving unit, which backfired by blocking my one window and blanketing the space below the loft and the reach of the already dim ceiling lamp (most of my room) in darkness. I’m smarter now! In addition to my dim ceiling lamp I have a three-setting floor lamp and two desk lamps, one on my desk and one (a touch lamp, also three-setting) facing the cozy cave below my loft. I have 2*2*4*4=64 options for the lighting in my room, not including my windows. I think having control over the light in my room has contributed heavily to my happiness.

I have two alarm clocks: a radio alarm clock for almost always and an obnoxious Clocky alarm clock for actually waking up. Clocky rolls away while squealing in a variety of obnoxious pitches. It’s impossible to sleep though and great for pre-midterm naps. (Accidental seven-hour naps were a staple of my freshman year. Don’t let them take over yours.) Clocky is especially nice combined with my loft. I can’t leave it in my bed because I don’t want it to roll out the window, so when I do use Clocky I have to climb out of bed to turn it off.

Fall semester freshman year I got a double ear infection (double earn infection, all across my productivity!) that wiped me out for about two weeks. S^3 and medical can only help you so much when you’ve missed 20 lectures and eight p-sets and maybe an exam or two. My grandparents in Russia shipped me an ушанка from Russia and I haven’t gotten an ear infection since. Of course I look like this in the winter, but it’s worth it: 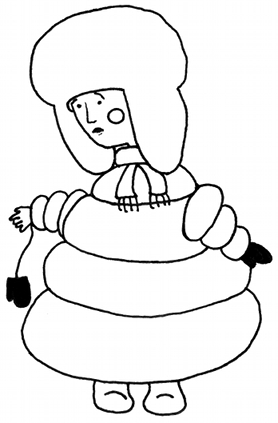 A black and white printer 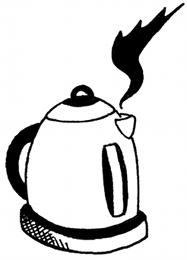 A personal printer is not necessary. There are printers all over campus and in the dorms. Having your own printer is helpful if your dorm’s printer starts spitting black streaks across everything and you want neither zebra p-sets nor to trek to campus.

You’ll need one for the ginormous tea collection you’ll inevitably accumulate after your first three trips to Shaw’s (our local grocery store). Microwaving cups of water loses its novelty after a week.

Did you know that when you wake up in the morning you wake up with 600 species of bacteria colonizing your teeth? Water floss can’t replace actual floss but it’s better than no floss at all when you’re hosed. It’s fun, like a water fight in your mouth.

When I first came to MIT I bought a butterfly chair, which collapsed when I tried to fit more than three people on it. A beanbag is much better. 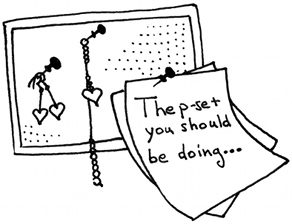 I have a lot of beautiful jewelry my grandparents gave me but until this semester I’ve kept it in a box. Unfortunately this meant I could only wear the jewelry I remembered, and only if I had time to pick it out in the morning. At the start of term I hung

all my necklaces and earrings on a large corkboard, and bought a smaller corkboard for p-sets. Now everything is visible and I can wear pretty things more often. 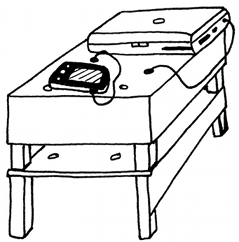 When they’re in season you can buy crates of clementines at Shaw’s. After demolishing the clementines take a look at the crates: they are wooden, stackable, and easily taken apart. If you flip them over, there are holes at the top that are perfectly sized for a charger cord, and the surface is just large enough to hold a cell phone and a

PDA and an MP3 player. If you bend back and remove the staples holding it together, you can remove walls of the box, exposing space for you to put things inside. If you stack them you can build a customizable shelving unit.

Things that are yours

It’s become important to me that my space feels mine, so that when my life outside is collapsing, at least something feels consistent and right. Blank Institvte white walls are depressing. If you can paint your room you should. If you can’t, you can buy curtains online and a rug at Shaw’s. If you can, bring some junk from home to remind you of the world outside the bubble. I brought a lucky $2 bill, lucky pennies from 1992, a tiny pig figurine from a camping trip, a tiny cat figurine from my grandparents, a pet rock my little brother made me, and ticket stubs from trips home. You should also buy blankets and pillows and plushies. Lots of blankets and pillows and plushies. I love soft things.

I bought Hephaestus sometime this summer, from the Pet-Co a mile and a half from Random. My boyfriend and I picked out the fish and the fish bowl and the rocks and the fish food and the bamboo plant and the fish hammock and lugged it all home and put it together. The whole process took about five hours.

It’s comforting when you’re hosed and stressed out to see a living thing swimming, carefree, his red fins swaying in currents that only he creates, living an existence independent of classes and p-sets where he can socialize as long as he wants with his two friends, the bamboo plant and his reflection, his thoughts and his dreams limited only by the walls of his 1 gallon fish bowl. It’s reassuring that there’s a world without homework floating in the stagnant waters of freedom that you haven’t changed in at least a month, to be reminded of and glad for your own intriguing fish bowl and inspired to work twice as hard on that p-set you really should have been staring at instead of a fish. 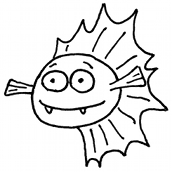