Happiness and hearts and the MIT Logarhythms and Muses in cell biology!

At about 10 am on Thursday there were about 100 people in lecture for 7.06, cell biology with Professor Iain Cheeseman. We were learning about how proteins made in the cell are marked for distribution to where they belong. Suddenly we were interrupted by the all-male a capella group the MIT Logarhythms.

“Excuse me Professor!” yelled the first Logarhythm, who ran into the lecture hall like a superhero. “We’re here to deliver a message of love! Is Madeline here?”—Madeline raised her hand—“Would you like to join us in the aisle?”

By now the rest of the MIT Logarhythms were in the room. “Madeline,” one of them said, “meet the Logs.” And then, in unison, “Hi Madeline.” One of the boys kneeled. “We actually have a seat for you right here.” Madeline sat down on his knee and they surrounded her, some standing and some kneeling, and sang “Do You Believe in Love” by Huey Louis and The News, which begins:

After the song they gave her a rose and the class applauded. As they ran out the door another Valentine’s Day superhero ran in: the first of the MIT Muses, an all-female a capella group. “Hi,” she said, “sorry to interrupt! We’re the MIT Muses. We’re looking for Iain Cheeseman.”

The class broke out in “Ooh!”s and laughter. “Don’t be shy!” said a Muse, and then it turned out that Iain was the professor sitting in the front row way on the other end of the room.

I want to interject here and say that Professor Cheeseman is an absolutely fantastic person. His lab is next to the Page lab on the fourth floor of the Whitehead Institute, so I’ve seen him around for the past two years and now I get to see him twice a week in class. I absolutely cannot be unhappy around him, no matter how determined I am. He radiates enthusiasm for life and for the material he teaches like a GFP-tagged protein under ultraviolet light.

The MIT Muses surrounded Professor Cheeseman in the front row and the class laughed again. They sang “1, 2, 3, 4” by the Plain White T’s, which goes:

They gave him a small red bag containing what I assume is candy, said, “Happy Valentine’s Day!” and ran away. Professor Cheeseman got up to erase the board. “If I find out who did this, that’s like 10 points from your house.” (The class is split up into houses—recitations—named after the houses in the Harry Potter series. I’m in Slytherin.)

I’m thrilled that Professor Cheeseman got a Valentine’s Day serenade. It was adorable and awkward and happy and I felt giddy and happy and I couldn’t stop grinning in the hallways for the rest of the day. Luckily I was already recording the lecture on my Smartpen, and happened to also record the serenades to share with you. Here is the audio:

Type I and Type II proteins, which are mentioned toward the end, are two types of transmembrane proteins that stretch across the cell membrane. A Type I protein has an amine group (-NH2) jutting out of the cell and a carboxyl group (-COOH) projecting into the inside of the cell. A Type II protein is the reverse: the carboxyl group end is on the outside of the cell and the anime group end is on the inside. Both have a large (about 25 amino acids) hydrophobic region that rests in the hydrophobic interior of the plasma membrane. Another type of transmembrane protein is the polytopic protein. It crosses the cell membrane multiple times (and has multiple long hydrophobic stretches). 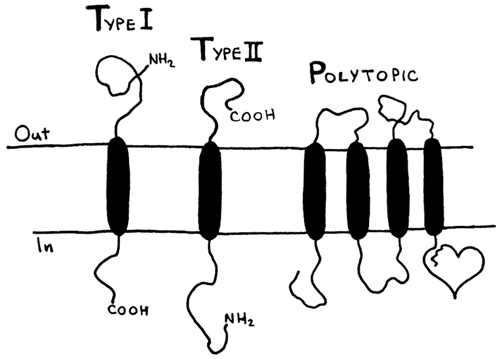 Right now we’re learning about how proteins are customized for their environments, how the cell distributes proteins to where they belong, and how proteins are marked for distribution. Intracellular protein transport is as elegant and complex as a retail distribution network in our human-sized world. Unfortunately MIT open courseware (OCW) doesn’t have notes or video from 7.06 lecture, but 7.012 (Introductory Biology) has a lecture on protein localization that you can watch from home.

In case you’re wondering what a Valentine’s Day serenade looks like, here’s a video of an MIT Logarhythms serenade from last year that I found on YouTube. (I’m endlessly floored by how amazing our a capella groups are. Every song they cover sounds infinitely better than the original.) 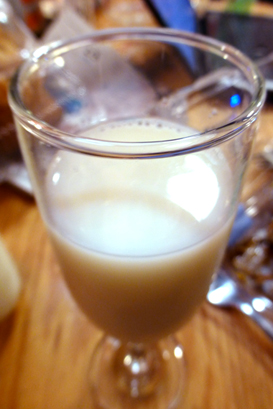 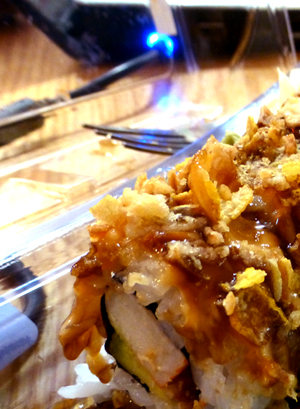