Annie asked “I was wondering if you could tell me which floors have cats and which floors are smoking floors in EC (EC’s webpage doesn’t seem to be working).”

One thing to remember is that just because a hall is “smoking” doesn’t mean that you’ll be submerged in clouds of smoke. People are pretty polite about it.

And on to the point of the entry…

One concern I hear a lot from people who are not MIT students is “Oh no, if they’re allowed to choose where they live, they’ll only associate with their living group and not experience diversity!” I have to say, if you only have friends in your living group, something’s wrong. Just because you love your living group doesn’t mean you can’t visit other people at other places.

For example, over the weekend, I went to Random Hall for boffer combat on the roofdeck. Boffing is very popular at Random – well, it’s popular other places too, but I’d say most so at Random. You fight with swords or staves made of PVC pipe covered in foam, which is covered in duct tape, with airholes poked in the end to keep it soft.

These guys were moving so fast that I could barely keep them in the picture. Dan ’08 presses forward against Yoyo ’07: 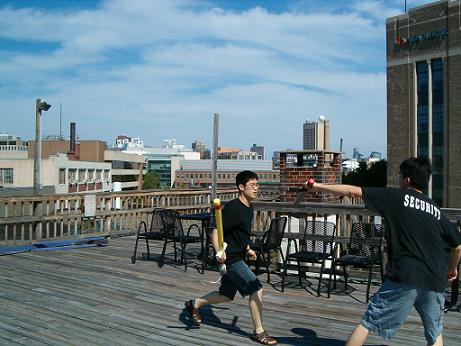 But Yoyo regains the advantage, lunging at Dan, who backpedals. 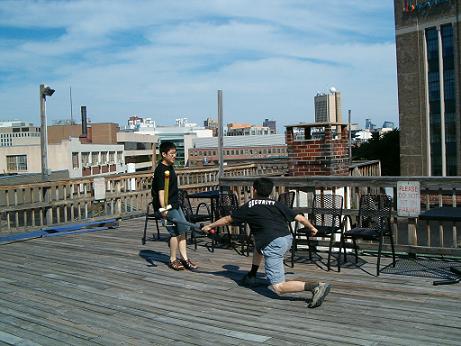 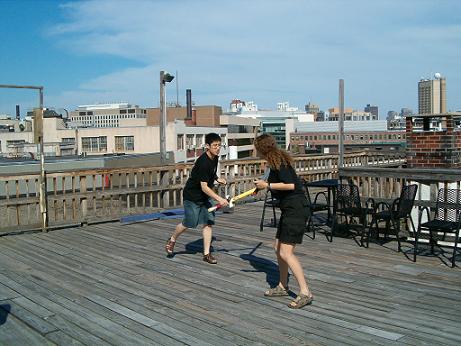 I think I deliberately circled around here to make it easier for Yoyo to get a pic. 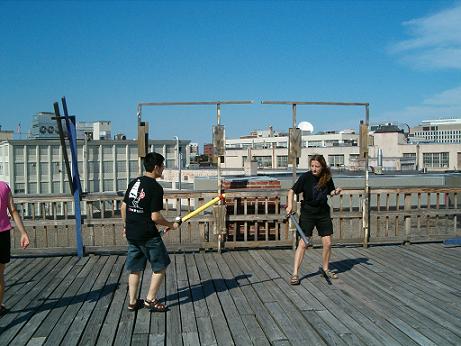 “Grrr!” Dan and I in fierce concentration, swords locked together, as Andrea ’07 wanders by to look at the sky and the neighboring rooftops: 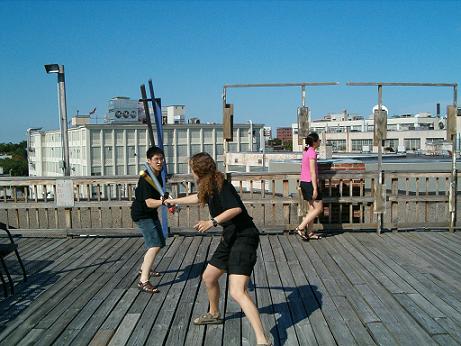 And last night, I went to dinner at pika. “What’s pika?” you might ask (I did the first time I heard of it). pika is an Independent Living Group, or ILG. An ILG is a non-dorm, MIT-affiliated living group. Sort of like a fraternity or sorority, but without a national organization. pika used to be a fraternity, Pi Kappa Alpha, but left its national when it went coed in the ’70s.

If I had to describe pika, I would describe it as a liberal, hippie-ish commune full of bright colors, carpentry, and cooking. The cooking is a big draw – each night, two students prepare dinner for the house, with vegetarian and vegan dishes (probably half the house is vegetarian or vegan), and meat dishes if the cooks are omnivores. Non-pikans can purchase full or half meal plans for a sum of money and agreement to cook or clean once every couple of weeks, so there are often many non-pikans at dinner, both those on meal plans and those who go over to hang out once every few weeks, like me.

The pikans live in this pretty house in Cambridgeport, only a few minutes farther from main campus than some of the dorms. 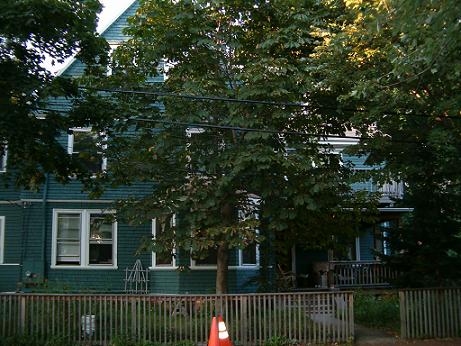 My good friend Dave ’06, who has been leaving snarky comments in this blog, lives at pika, but he wasn’t at dinner for me to get a picture of. Too bad.

Rod ’08 and Noelle ’08 eat dinner. And you probably thought by now that all my friends wore black! Noelle is a pikan, Rod lives on 3rd East. Rod isn’t keen on having his photo taken, which is why he’s glaring at the camera, but he figured that “at least there will be a snarky comment from Dave.” 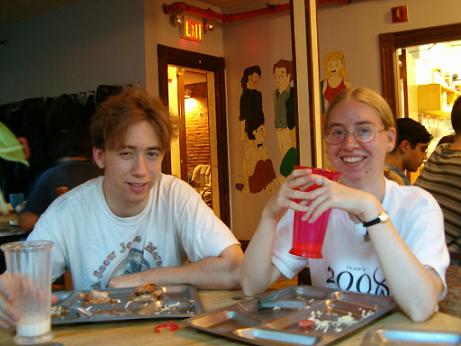 You can see the Doonesbury mural behind them. pika is very politically conscious. This normally means national politics, but they are always happy to discuss campus issues with me when I visit, and usually have insightful things to say.

Maggie ’07, pictured here, and fellow pikan Cassandra ’07 are two of my oldest friends at MIT. I think I met them before we had our permanment housing assigments. 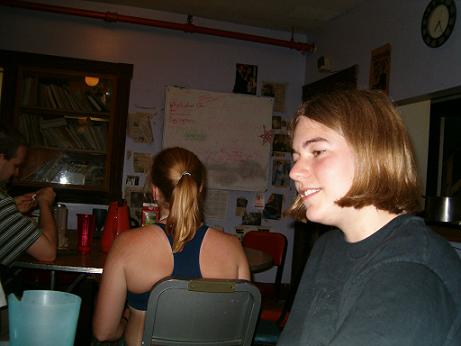 Tucker ’07 and Liz ’08 are summer pikans. During term, Tucker lives at Random and Liz lives on 3rd East. Despite their similar looks, interests and personalities, they are not brother and sister (as so many people think upon meeting them), but a couple. They were responsible for the omnivore-friendly dinner, I believe. 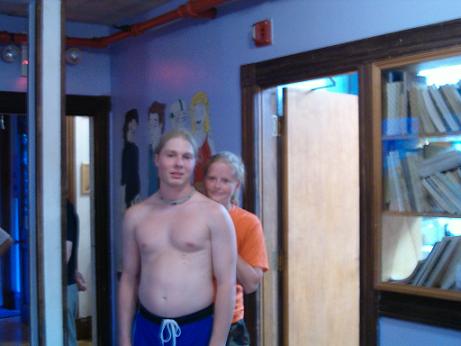 I mentioned before that pikans like carpentry, and hands-on things in general, as shown by this picture of the back of their house. They built the porches, stairs, and treehouse themselves. 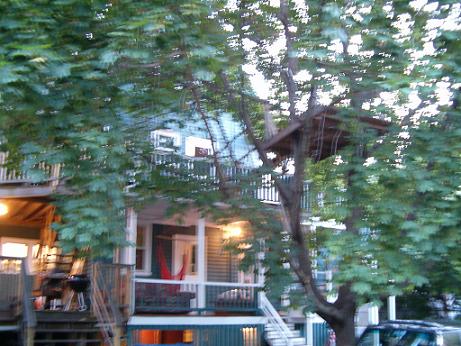 You know, every time someone tells me that it’s better and safer to require all freshmen to live in dorms (as has been done since 2002), I want to point to pika and say “What could possibly be better or safer about not allowing freshmen to live in this place?”