Wandering through the Infinite by Nisha D. '21

3.5ish years of wandering MIT, squeezed into like one month

At some point during the semester, when walking to quarantine lunch in the Stud, I realized that there were a lot of cool things on the walls of the Infinite that I hadn’t actually bothered to stop and read. In a regular semester, I was always in such a rush to get to wherever I needed to be, and all of the words written on the walls of the Infinite always blurred into the periphery of my vision.

But this semester, with four easy classes and a return offer under my belt, I had a lot of extra time to wander the halls of MIT and think about better times. So, I set out to walk through every level of the Infinite and take pictures of things that caught my eye.

The Infinite, for those of you who haven’t visited MIT campus, is the very long (but not infinite) corridor that runs through the heart of campus. Think of it as the spine of MIT’s body. There’s even a Wikipedia article about it! It’s how most MIT students, in a normal year, would get to and from their classes. It’s where you’d pass by a friend you hadn’t seen in a while, and stop awkwardly in the middle of traffic to try and catch up with them, and then inevitably promise to get lunch sometime. It’s where you’d try to deduce if passerby were carrying boba, indicating the existence of a boba sale⁠01 i miss these more than god will know in Lobby 10.

As a disclaimer, I branched out from the main hallway that we call the Infinite as well. I’m not actually sure what my logic was, but I basically went everywhere that one could reach *from* the Infinite…except MIT Nano, which was locked, and the building numbered in the 30.

I started my walkthrough with Infinite 1 because I would walk down it every day to go to the Stud for quarantine meal plan food.

i really love these paintings, but there MUST be one missing and it really annoys me
an interesting poster on COVID-19 in one of the glass panel things in the infinite
there are SO many cool posters with peoples' research on them. the knowledge you can gain just by reading these (if you comprehend them) is insane
the small text on this is hilarious
there are cool little MIT history factoids like this all over the place
there are these cool major placards that exist for a couple of majors. i'd like to think they exist for *all* the majors cause that would be a cool scavenger hunt through MIT
there's tons of cool history also literally embossed into the walls

A few days later, I took my scooter and headed to Infinite 0. The basement is a really fun place to scooter around because there’s normally nobody there at night and you can go as fast as you want.

the toy lab logo is so aesthetic
not to call gracie out here, but it looks like she's pretty into bumble
we have a....staples in the basement?? i actually do not know what this is
a convenient guide to makerspaces on campus
there are a few funny posters in the facilities center of the stata basement
should add this one to my vending machine post of yore
there's an entire spectroscopy lab and exhibit in the basement that i did not know about, literally never encountered it
cool works by the glass lab
not sure when this was painted, but it's still relevant
indeed

On Infinite 2, I discovered a whole bunch of these major placards that feature histories of each major at MIT. I *really* want to know if one exists for every major, and if anybody has found them. This would make a great blog post.

this poster showing all the big boston biotech firms - boston is huge on biotech, as is evident
this poster which i bet would be really cool if i understood it
these cool geometric solids in the math building
this room which i did nOT know existed, it seems really cool
i always forget that MIT has an ocean engineering department, that seems so specific
this cool mural deep in building 1
this interesting train related research

I walked through Infinite 3 with my boyfriend after MITHenge on November 10th. Fun fact, Infinite 3 is a prime location to catch MITHenge.⁠02 if you didn't watch the video - this is exactly what it sounds like; the sun lines up with the infinite just right twice a year and lights up the entire hallway

the cosmic ray chandeliers!!! they are super cool. explanation in next picture
apparently my boyfriend helped paint this in 3.094 (materials in human experience) our freshman year. fun fact, the professor of that class - dr. heather lechtman - is a real life indiana jones
there's a whole display on khipu
how to use khipu
actual khipu i think
all down infinite 3, there are some to scale placards of the planets which emanate out proportionally from a sun down at the other end of the corridor! i didn't know this and it was cute to discover
i gave up after neptune but you get the idea. for a similar but larger scale idea, look up the boston community solar system!
a stray model ship, living away from its brethren in the exhibit on the first floor of building 5

I somehow managed to procrastinate on walking through Infinite 4 until my very last night at MIT. In retrospect, I think I only found the objects I ended up taking pictures of interesting because I was drunk. I was also stumbling through the halls singing Sting’s The Last Ship⁠03 a hall meme and very unofficial anthem, it slaps , so I truly must have appeared insane. The Infinite has great acoustics though.

this is such a mood
lots of cool urban studies posters
random roman looking motif thing???
there's a huge exhibit on the edgerton center that takes up an entire section of infinite 4, it's pretty cool
peering into an architecture shop

After finishing my last walk through the Infinite, I went out to Killian Court in front of the Great Dome. I ended up lying down on the sidewalk, looking up at the stars, and tearfully whispered gratitude to the clear sky – gratitude for all the experiences I lived, friends I made, and dreams that I fulfilled.

After that, I stood up, wiped off my face, and took this picture. 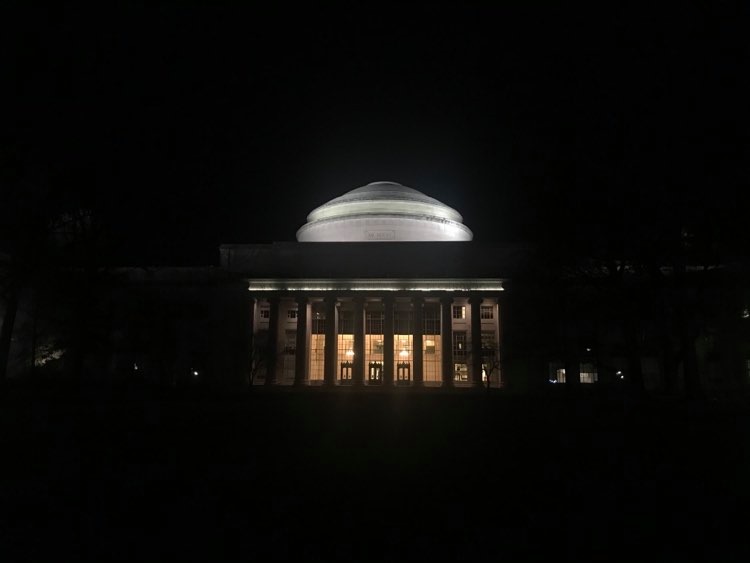