In 2019, MIT swapped out all of their coin-operated laundry machines with “Washlava,” a laundry platform consisting of IoT-connected machines. In this blog you’ll find two things: (1) my introduction to Washlava and (2) an analysis showing how MIT students felt about Washlava based on anonymous MIT Confessions.

In my freshman year living in MacGregor House, I used to live relatively far from the laundry room, in a part of the building with no elevator.⁠01 the low-rise (specifically, H Entry) It wasn’t a huge deal, but it did make it extra inconvenient if I lugged my hamper all the way to the laundry room and then there were no machines available, or I had forgotten something (tide pods, dryer sheets, quarters) and had to go back to my room.

Over the summer between my freshman and sophomore year, MIT decided to “deep clean” MacGregor. This meant that, for the first time in years, MacGregor would not host summer residents⁠02 Except the GRAs (Graduate Resident Advisors) and other house staff who live in MacGregor year-round or provide summer storage.⁠03 I didn't have a ton of good reasons for choosing MacG, but this was supposed to be one of them. I ended up having to pay for a storage facility in the area. I’m still pretty salty about the lack of free summer storage, because I checked the basement (where students would ordinarily store their things) when I moved back into MacG in the fall and it was as dusty as ever.

I and many other members of my freshman-year suite stayed in Boston over the summer. We were curious about how the deep cleaning was going, but we weren’t sure how to get inside MacGregor to check it out. Our ID cards, which normally give us door access, were deactivated for the summer. In mid-August, one of my suitemates decided to try his ID anyway, and it worked! I biked over and we explored the building. It was underwhelming. The floor didn’t even look vacuumed.

The one big difference was the laundry room. It was brand-new. Every machine was shiny, scratch-free, and equipped with a mysterious glowing button. 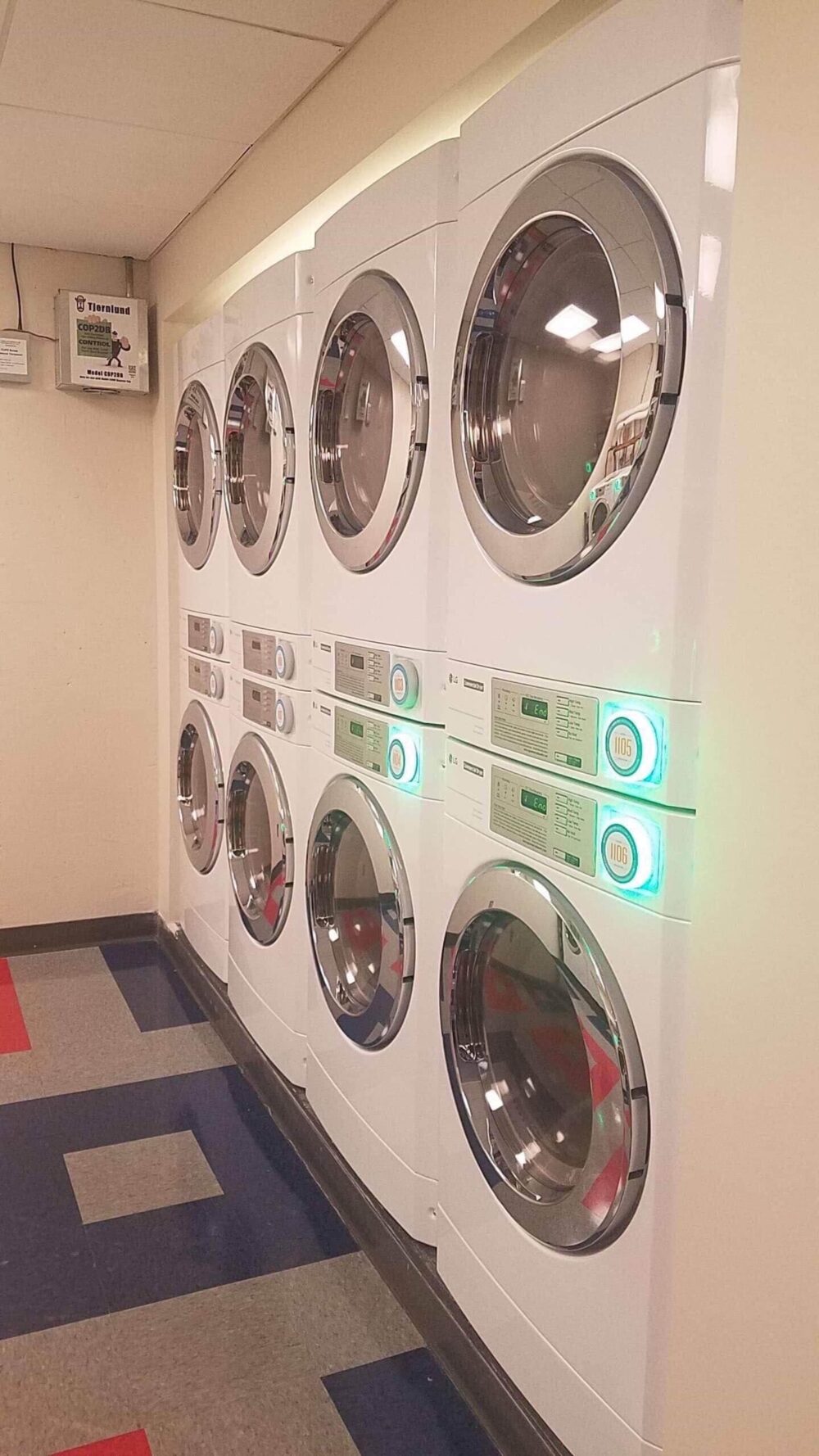 look at the clean, shiny surfaces! the scratch-free windows! the glowing buttons!

I was pretty excited about this. I thought, at the time, that only MacGregor had gotten new laundry machines, but it turned out that almost every dorm⁠04 Random Hall kept their old laundry machines did. As school began, we were told that these new machines were part of the “Washlava laundry platform” and were told to install the corresponding app.

For the first two weeks of my sophomore year, the machines and the app kept malfunctioning. There were a variety of issues, and The Tech⁠05 MIT's newspaper wrote an article about it.

Once everything was finally operational, I actually liked the machines a lot. I had moved to a different part of MacGregor⁠06 the high rise (specifically, D Entry) where I was a lot closer to the laundry room and had access to the elevator. This, combined with Washlava, ultimately did make laundry a lot more convenient. I could check if there were machines available, temporarily reserve machines, pay without coins, and check on the status of machines I was using. Plus, no more lugging my hamper across the building and up three flights of stairs! I loved Washlava.

However, this turned out to be a divisive opinion.

Since the Washlava was installed, there have been 32 posts made anonymously about it on “MIT Confessions” (a public Facebook page) and 3 more on private confessions page. I decided to collect data on these Washlava-related confessions and analyze them to answer:

Here are the Washlava-related confessions, ordered by date, with highlights added to mark my personal favorites: 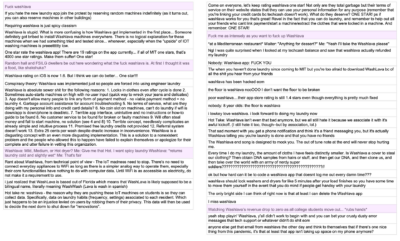 There are a few confessions calling for 1-star ratings. This effort seems to have been successful. As of writing this post, the Washlava app has a 1.4 star rating (with 191 ratings) on the App Store.

Normally, I dislike word clouds. I decided to make one anyway to roughly highlight what people were saying: 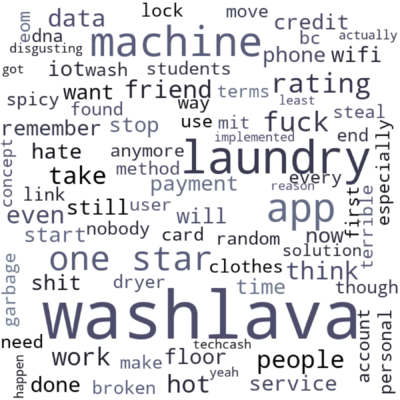 I counted the number of times each topic was criticized in the confessions: 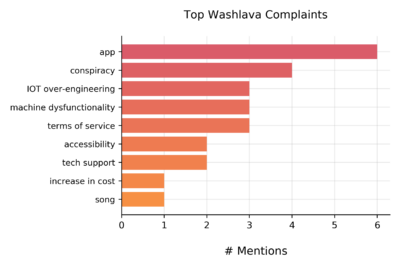 iv. When were people most dissatisfied?

I looked at when Washlava-related confessions were posted throughout the year and observed:

Sentiment analysis is a sub-field of natural language processing that interprets emotions within a text. I used two simple models to extract sentiment: 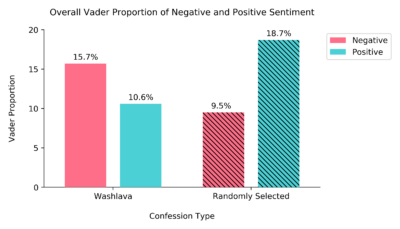 Flair seemed to agree that Washlava was more negative than typical confessions. Flair classified 88% of Washlava confessions as negative, as compared to only 62% of the control group confessions.⁠10 The fact that the majority of the randomly-selected confessions were classified as having negative sentiment doesn't surprise me; MIT Confessions can be pretty toxic at times. Things aren’t looking great for Washlava at this point.

Next I wanted to get more granular and look at the distribution of sentiment metrics for individual confessions.

Vader provides a compound score, which is a measure of sentiment ranging from -1 to 1 calculated by taking a sum of normalized lexicon ratings for word in a text. I calculated the compound score for each confession and made a raincloud plot. Although both groups had a median compound score of 0, the means trended in the desired direction: -0.12 for Washlava confessions and 0.18 for the randomly-selected group. 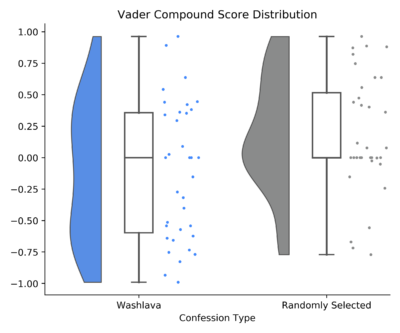 The distribution surprised me. I didn’t expect to see so many positive compound scores in the Washlava category since Flair classified 88% of Washlava confessions as negative. In the raincloud plot above, only 48% of the Vader compound scores were negative. 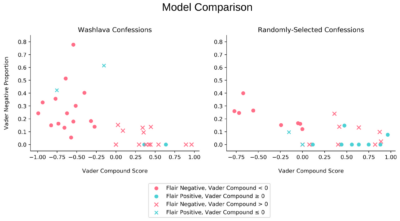 In the left-side Washlava plot, you can see from all the red x’s that Vader often gave positive compound scores to confessions that Flair classified as negative. Meanwhile, in the right-side plot, more of the confessions with positive compound scores were also classified as positive by Flair, as seen by the green dots. This plot helps highlight differences in the raw data points in the raincloud plot above which otherwise might look similar.

Along with what was observed in the previous section, at this point it seems that the overall MIT-confessions-reaction to Washlava was quantitatively negative, both relative to a randomly-sampled control group and according to the Vader lexicon ratings.

Did the quantity of Facebook reacts trend at all with negativity? Perhaps, according to this plot of the proportion of negative words in a confession by the number of Facebook reacts it received. Instead of points, I displayed the most negatively-rated word according to the Vader lexicon. If a confession did not have any negatively-rated words, it was not included on this plot. 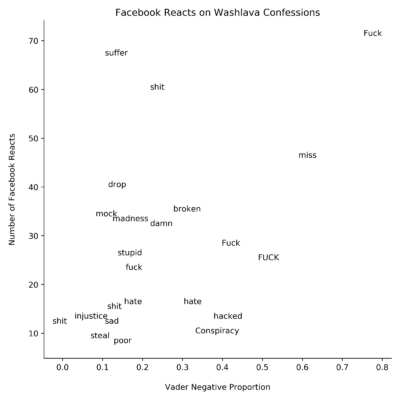 I feel like if Washlava was installed now, there wouldn’t be much of an uproar. In recent months, MIT students have had to collectively confront much more serious domestic and global issues. I generally support voicing concerns, no matter how small, but analyzing these confessions did remind me how much of a bubble campus provides to shield many of us from greater worries.  It is such a privilege to complain about a brand-new laundry system.