it gets pretty windy here in Kansas. Day 3 at the 2014 Design/Build/Fly competition.

Today was the major flight day for most of the teams at the Design/Build/Fly competition, and as hats flew and hair rippled in 30+ mph wind, it became clear that Wichita was dead-set on making sure flight was as difficult as possible.

We wanted our plane, Corn Dog, to fly all three of our missions today–two speed missions and one untimed cargo mission–so that we would have an opportunity to re-fly tomorrow for better scores. However, when we arrived to the competition site, a brisk wind decided to settle in and loiter in the airfield for a day or two. Let’s be clear–wind is bad for model planes. Wind means turbulence, extra drag, and a significantly decreased groundspeed when flying upstream. For instance, if your plane is designed to fly at 20 mph and the wind is 30 mph, your plane will take off and actually “fly” backwards. 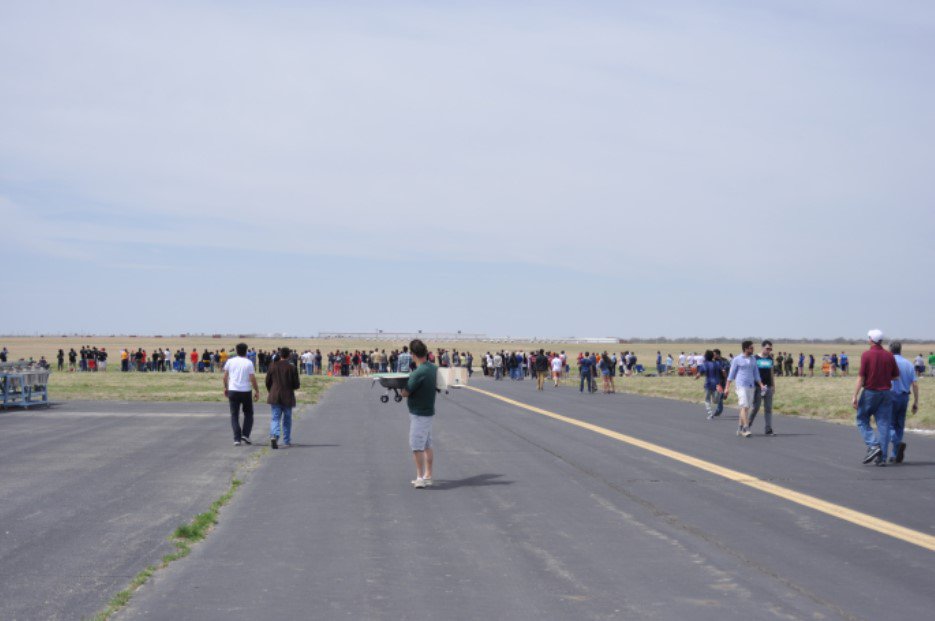 Fortunately, Corn Dog was built for a cruising airspeed of about 70 mph, but it still took the extraordinary skill of our pilot, Adam (MIT alum and very experienced DBFer) to fly without crashing. We completed our first speed mission with a score of 7 laps in 4 minutes (tying with the best score), and we were only a few extra seconds short from setting the high score at 8 laps. When it was our turn to fly again, we flew the untimed cargo mission, carrying a three-pound payload for three laps. Unfortunately, the flight rotation didn’t allow us to fly our third mission, so we’ll be doing that tomorrow morning (and praying that the wind will take the morning off). 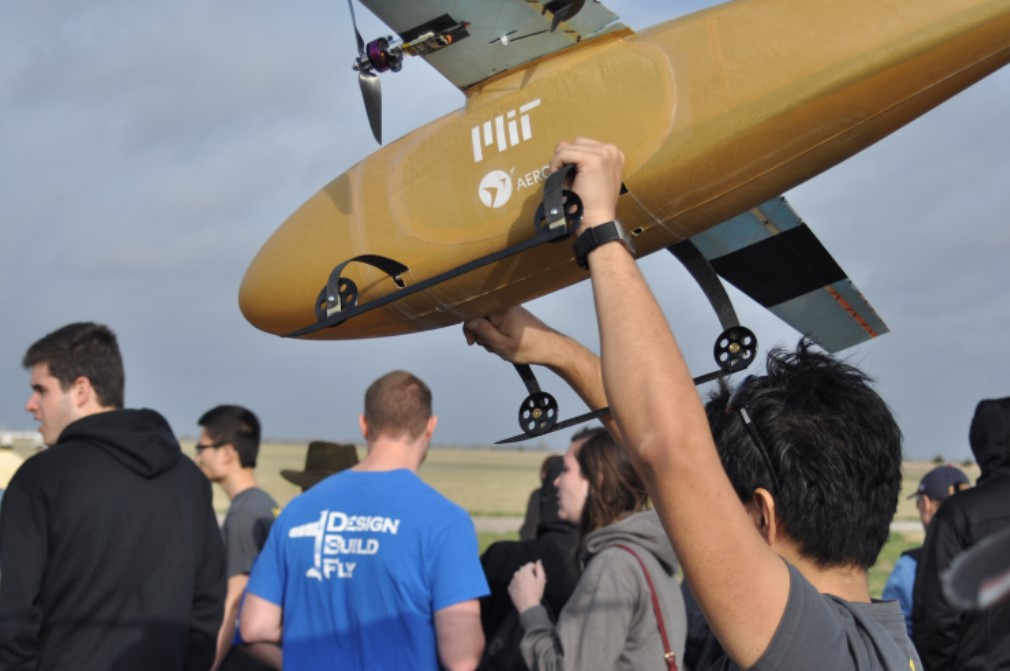 Corn Dog on the move.

Corn Dog weighed in on the heavy side at 4.66 pounds empty. Our extra weight nevertheless meant that we were one of the most stable planes at the competition; we spent all afternon between our flights watching plane after plane flip, crash, snap, or explode after being attacked by vicious winds at inopportune moments. One plane, for instance, ran out of power midair and came in for a glider landing–except the wind picked up right before touchdown, and the plane flipped over and shredded itself against the ground. Another plane got carried off-course by the wind and appeared to lose connection with the receiver, diving explosively into the lawn to the sound of a collective grimace from the crowd.

At the end of the day, however, score is divided by aircraft weight–and as the live scoreboard updated throughout the day, we found our score trailing behind those of planes with net weights around 2 pounds. For comparison, Corn Dog’s battery pack alone weighs 1.5 pounds. Here are the weights of the top three airplanes at the end of today:

Despite having the same mission scores as these teams, Corn Dog had over twice the weight, so we checked in at 13th place (that’s with the zero score for the mission we didn’t get to fly yet). Since Corn Dog is so fast, we’re anticipating doing awesome on the third mission, and hoping to have enough time to refly our first mission and bump our score up to 8 or maybe even 9 laps. Given our weight, we’re shooting for somewhere in the vicinity of a respectable fifth-place finish. Wish us luck and favorable weather :) 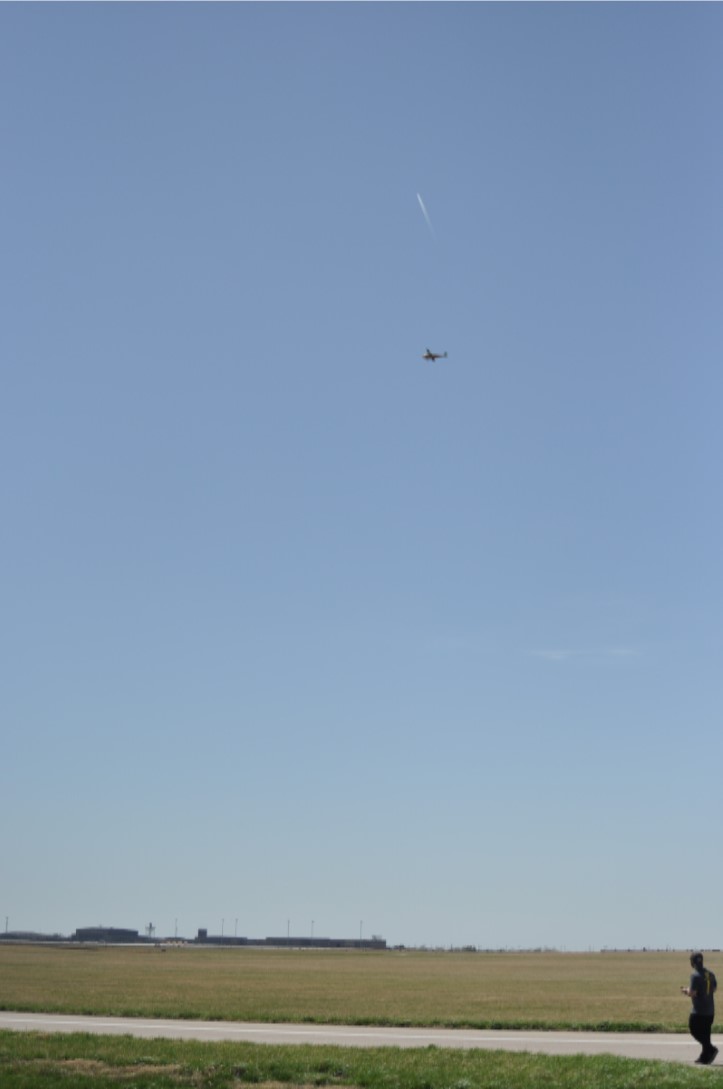 Overall, we’re very happy with our performance–and other teams are noticing how beautiful Corn Dog is, too. DBF really fosters a super-friendly atmosphere, and we got into a lot of long conversations with other teams about our construction process. We were one of the few teams to build our plane pretty much entirely out of composites (big thanks to our sponsors and to the wellspring of resources that is MIT AeroAstro)–most of the other planes were made out of monokote (which is sort of like plastic saran wrap, but sturdier) stretched over balsa wood skeletons. Some common questions we got:

What’s the fuselage made out of?

What are the wings made of?

Two skins made of insulation foam and laid up with carbon fiber and fiberglass, then joined together sandwiched around a carbon/foam-core spar. It makes for a nice sky-blue wing that clashes wonderfully with the mustard color of the Kevlar fuselage.

How did you steer the plane in the taxi mission?

We have two propellers, so differential thrusting gave us plenty of turn control.

How heavy is it?

Too heavy. 4.66 pounds. (Usually elicited a sympathetic nod and something along the lines of “Yeah…weight tends to creep up on you unexpectedly.”)

Can we touch it?

Final note: I’d like to give a shoutout to the team from USC, who had all their female members in hot pink shirts with TEAM GIRL on them. It’s a great way to call attention to sexism in STEM and at least put that awareness in people’s minds. Not to mention it looked fabulous–I’m beginning a campaign to put the entire MIT team, male and female, in hot pink My Little Pony-themed tank tops for next year’s competition. Rainbow Dash would be proud. 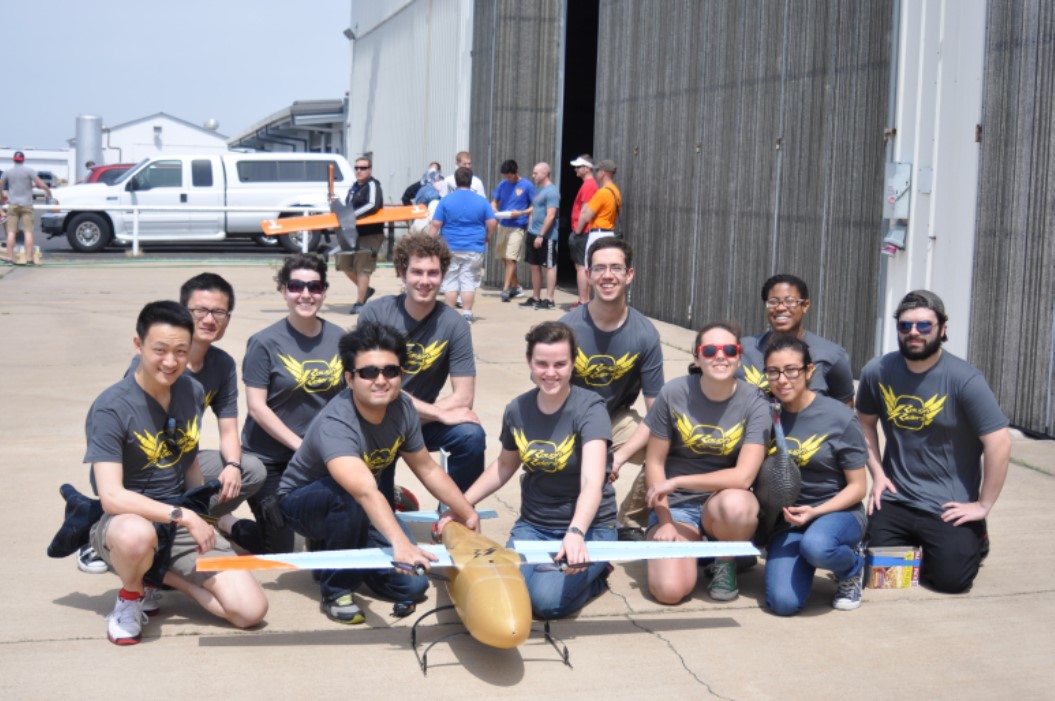 Corn Dog is cute, and so are we.