I’m still working on my post about Mystery Hunt, and I realized it’s been quite some time since I last posted, so here’s a quick blog post.

For web.lab, which is an IAP class I said I was taking, we made a website! I teamed up with Dylan L. ’23 and Emma Q. ’23 to make em7.io. You input the melody to a song, and then it automatically generates a harmony.

Clicking the Compose button links you to a page where you can record a piece using the piano keyboard. You can mess with the song’s key, time signature, and tempo; you can snap the notes to the beat, and you can drag notes around to edit them.

Once you’ve recorded a song, clicking the Harmonize button shows you the completed harmony, generated through our magical algorithm. You can adjust the chords paired with each note by clicking on the dropdown.

After that, you can save your composition to your profile, and from there you can share your work with others. I thought that the harmony it generated for Tong Hua was pretty good, as well as for this piece that one of my friends wrote.

You can look at the web.lab schedule here. The way it works is that the first week is a bunch of lectures, starting from HTML and CSS and going all the way to JavaScript, React, NodeJS, and MongoDB, and some lectures about designing websites and stuff. The second week goes into sockets and more info about CSS and JavaScript and MongoDB and design, and has lectures from sponsors, ending with a lecture on deployment and coding best practices.

This goes in parallel with actually making a website. By the end of week 1, we formed teams and submitted ideas for feedback. Work on the website began in the middle of week 2. A hackathon happened in the end of week 2, and a minimum viable product was due near the start of week 3. Then another hackathon, and then the final submission was due in the middle of week 4. So really, web.lab just feels like this long hackathon.

my github commit history: a visual representation of web.lab

At the end of week 4 is the awards ceremony, because web.lab isn’t just a class, but also a competition.⁠01 just like a hackathon! Teams can compete for over $20,000 in total prizes. We were lucky enough to win fourth prize, which means that we get some nice prize money, a sweet plaque, and a fancy lunch with the sponsors. I imagine the winners page on the web.lab site will get updated soon, so make sure to check out other websites too!⁠02 of the semifinalists, i really liked <a href="http://day-ly.herokuapp.com/" class="broken_link">day.ly</a> and <a href="http://h2gro.herokuapp.com/" class="broken_link">h2gro</a> 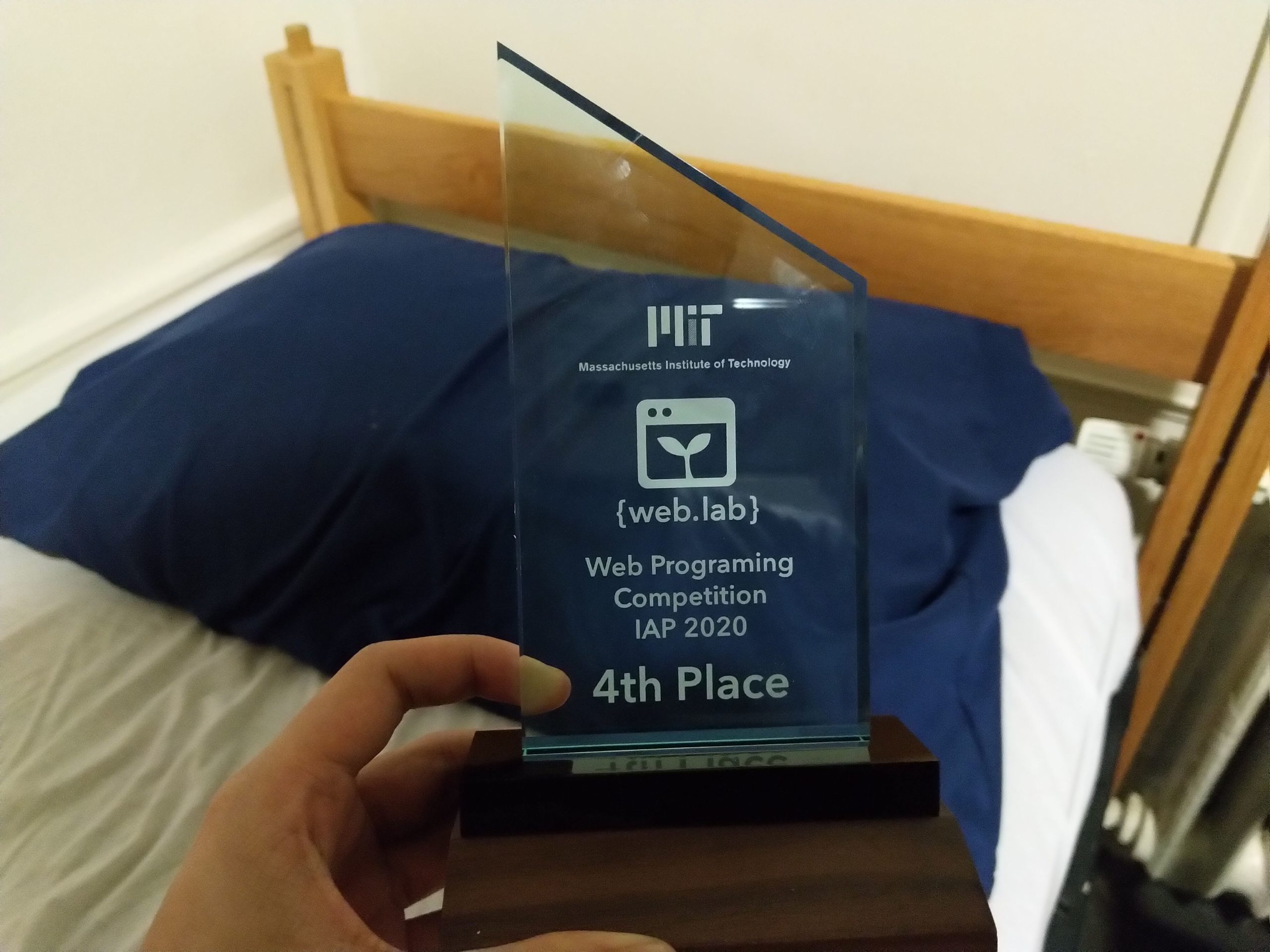 Here are four things I learned while making this website:

And here are four slightly deeper things I learned:

Finally, a huge shout out to the web.lab team for making the class possible, which probably involved looking for sponsors, preparing material, giving lectures, providing food, running hackathons, and maintaining a blazing fast three-minute average response time on Piazza. The class is run entirely by students, and I can’t even imagine the effort that goes into running a class of this size. Thank you so much!