It feels like the calm before the storm. Please don't forget to breathe.

Now playing: “Video Killed the Radio Star” by The Buggles

It was a Thursday afternoon in New York City. It was also mid-December, so “afternoon” was code for “depressingly early sunset.”

After a lot of writing and rewriting and fretting around my application to MIT, I managed to have it submitted in time for the EA deadline. Somehow, I managed to distract myself for the agonizing six weeks following October 31. And then, I got this email: 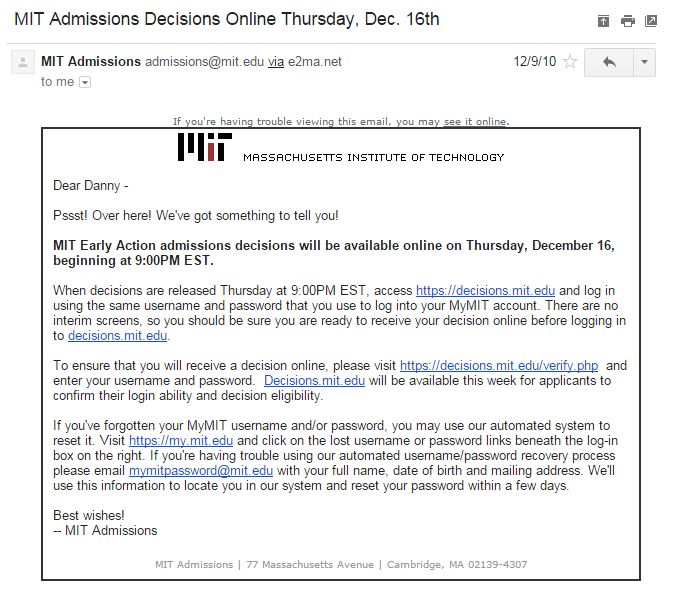 I haven’t really talked about this yet in my blog posts, but I have had a longish relationship with stress. When I was younger, I had what could be described as hypnophobia—fear of sleep. In particularly bad bouts, I’d freak myself out about something, then try to force myself not to think about it, then fail, then freak out more, and rinse/repeat ad nauseam. The symptoms still feel exceedingly real to me, despite the fact that I haven’t had a panic attack on that scale in years: the bottom of my gut would drop out, I’d hallow out, my teeth would chatter, and this dread of just wanting the panic to end would sink in and make my skin crawl.

I had had enough panic attacks by the time senior year of high school rolled around that I wasn’t looking forward to college decisions season. To my surprise, touring the assorted campuses turned out better than expected: I was a bit fixated on MIT by this point, and—

No, hold up. That’s a lie. I was kind of a lot fixated. And I was able to keep it under the surface, until I got that email the week before decisions. I remember my stomach threatening to drop characteristically as I read it. And oddly, I don’t really remember much else of that week, other than a general sense of terror-excitement.

Which brings me back to that Thursday afternoon. The day had been fairly normal so far, if unfocused: my Google Calendar tells me that I had double English in the morning, so we were probably discussing Ron Padgett’s poetry in Mr. Zavatsky’s class. My brain was a little more focused on the countdown to 9PM. As the day ended, I called home, and my mom reminded me that I had an appointment downtown…I was supposed to have an Educational Counselor interview for another college. I feel kind of bad now, thinking back: I was in the completely wrong frame of mind to talk about why I was interested in Foobar University. Oh well.

By the time I got out of the interview, it was about 6:00. I was in Midtown, meaning that I was surrounded by holiday lights and displays everywhere I looked. As a New Yorker, I have some desire to avoid tourist traps through the boroughs, but for some reason this was the night on which I would allow myself to be captivated by the skyscrapers I took for granted any other time.

I took a breath. The air was crisp, and as I inhaled I felt a strand of my anxiety slip away. For a second, my gut wasn’t churning with worry-anticipation. And so I decided to get a bit more of this fresh air, and called my parents to say I’d be walking home.

I then shut off my phone, and was alone in the city.

Manhattan’s famous rectilnear grid is thanks to the Commissioners’ Plan of 1811. One quirk of the layout is that the streets are 60ft wide (about a dozen running crosstown are 100ft wide), and the blocks (running uptown-downtown) are about 200ft. Thus, walking twenty blocks means covering almost precisely a mile; furthermore, people walk at close to three miles per hour, or sixty blocks per hour, or (more usefully) a block per minute. From this, you can quickly work out walking times to most places in NYC.

I did this mental math and worked out that I’d get home with plenty of time to spare. As I started walking, I realized that I was wishing for a soundtrack of some sort. That’s when I remembered one of the 50 Things:

3. In college more than ever before, songs will attach themselves to memories. Every month or two, make a mix cd, mp3 folder, whatever – just make sure you keep copies of these songs. Ten years out, they’ll be as effective as a journal in taking you back to your favorite moments.

I gave it a shot, standing on a streetcorner, adding a bunch of songs to an iPod playlist called “On the Go 5″—which I later renamed to “2010-12-16”. Hitting shuffle completed my isolation, and I then resumed my walk home among the throngs of window-shoppers.

It was dark and cold, but my head was clear. I remember talking over scenarios with myself, and what each meant for me. And by the time I reached my front door, I had come to peace with the decision process. The decisions had already been made, and my being anxious about them wasn’t going to change that. For the first time in a while, I was facing a stressful situation without the company of a knotted stomach and chattering teeth.

If you’re sitting there, reading this with something between butterflies and hornets, I encourage you to stand up, shut off your communication devices, make a playlist, and go out for a long walk. Your air may not be as crisp, and your decisions are released earlier than ours were, but I’m willing to bet that some fresh air and a fresh perspective would do you some good.

And if you feel up to it, I hope you try making a “2014-12-13” playlist. You’ll want to reflect on the application process in the future.