I need a good fedora

I work at Hasbro in Rhode Island, about a 1 hour train ride away from where I’m staying on campus. Kim ’11, who was also in Toy Design with me, also works there and yesterday she offered me a ride back to Boston.

Turns out, Kim happens to be a celebrity because she was a cast member on Season 1 of a show called “Design Squad.” One of Design Squad’s major sponsors is Intel, who also hosts the Computer Clubhouse Teen Summit every year. According to the official press release:

Chosen by their local Computer Clubhouse coordinators for outstanding leadership skills, technical and creative ability, and contributions to the community, these Teen Summit “ambassadors” from different countries will work together on design projects that address socially conscious challenges such as reducing urban violence and improving the environment. They will have the opportunity to express their ideas with high-end technologies, such as graphic design animation, digital art, music, radio, and video documentaries, and 3-D Modeling. While most Summit activities will be at Northeastern University, the Museum of Science will host a “Clubhouse-to-College and Career” Fair August 6, where the youth will explore career options, interact with local college representatives, and meet professionals working in a variety of fields, including engineering, publishing, animation, writing, production, programming, and photography.

Yesterday was August 6th and, consequently, was also the career fair. Design Squad had a table and Kim was asked to go so that she could talk about engineering and all that cool stuff. I went because I get into the Museum of Science for free (yay MIT ID card!) and because I figured it’d be good to blog about it.

We arrived at the Museum of Science and while Kim got all checked in I flashed my ID and got my hand stamped for reentry. That’s when I realized that although I was in the Museum I wasn’t going to be let into the Teen Summit area, which is a problem because I can’t very well write about something I don’t have access to. So I thought up a lie, and I thought it up quick. I walked over to the registration table.

“Hi, may I have a press packet please?”
“Sure, who are you with?”
“I write for MIT’s website.”
“Excellent. Well, here’s your press packet and your press badge, feel free to wander around and thanks for coming!”

Ok, so it wasn’t a lie per se, but it wasn’t expected. We walked in and headed over towards the Design Squad table. The gist of this event was that a bunch of tables were set up and kids wandered around asking questions and learning about various businesses and colleges. Doing my duty as a member of the press, I snapped pictures for ya.

First off was the Harmonix booth, complete with handmade prototype Rock Band guitar, cool stickers, and a crowd of gamers with blue bags. 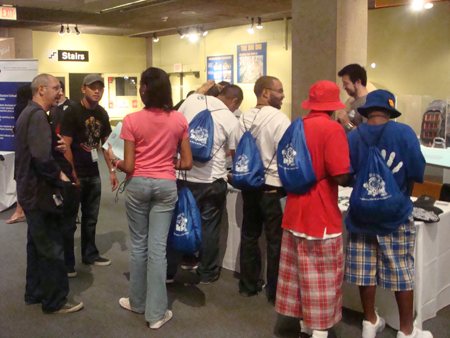 Next was Ingeeni Studios. I don’t know what they do, but I know that they were one of the more popular booths there. 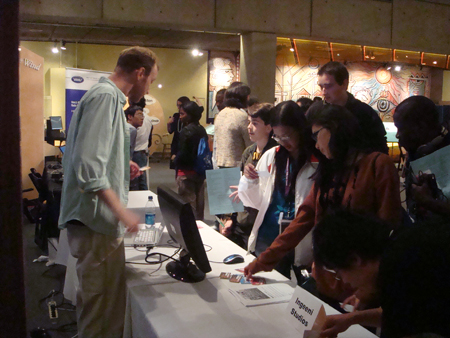 MIT had a table there as well, mostly showcasing Architecture and the Media Lab. Here it is before the show. 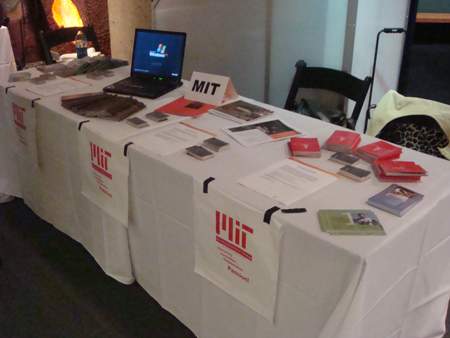 and here it is with a visitor. I’m at a loss for how to caption this one, but I urge you to be creative and try to guess what the lady at the booth said in order to get this kid to make this face. 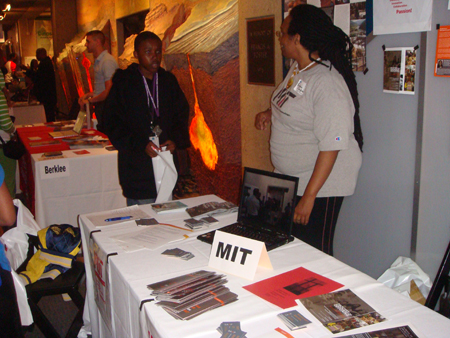 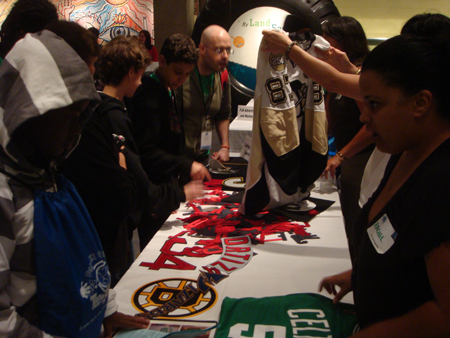 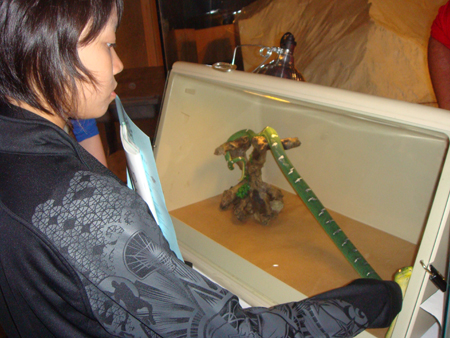 Over at the Design Squad table Kim and a kid from Season 2 were busy fielding questions and chatting with kids. The kid wearing the blue shirt in the back isn’t on Design Squad, nor is he an engineer. He’s just friends with Season 2 kid and wasn’t allowed to talk. 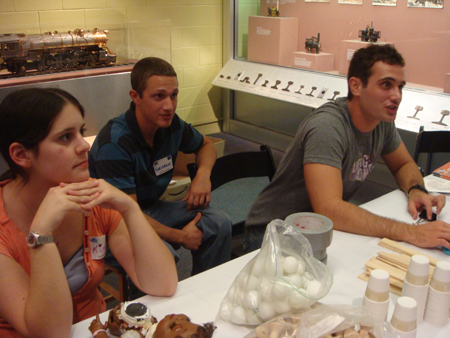 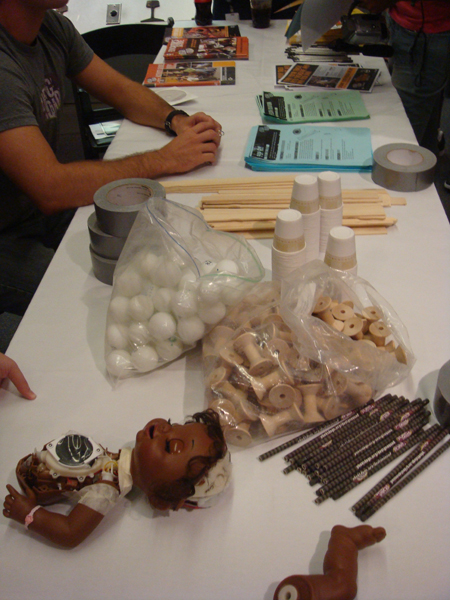 Well, except for the ripped apart Baby Alive doll, we weren’t allowed to use that. But, while other people were using fulcrums and catapults, I decided to spend a little more time on my catapult. Now, before you judge me, know that the materials were limited, I kinda hurried, and that duct tape is too elastic to store any torsional energy, but ignoring all of those, I set out to make an awesome ballista. Here’s what it ended up looking like: 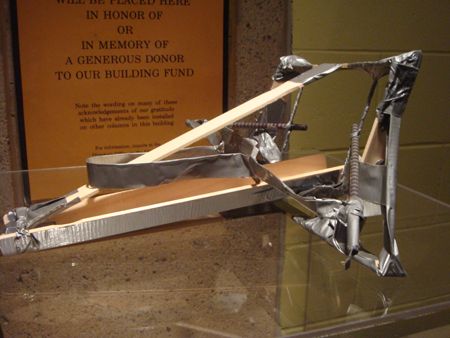 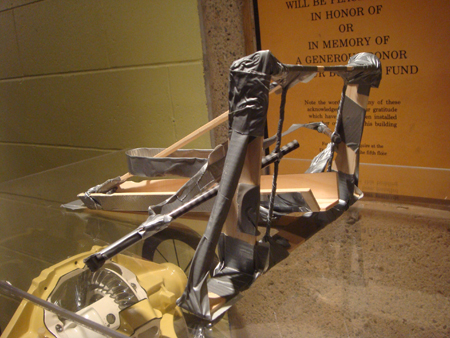 Awesome, right? It shot like, a whole 5 inches at its peak, and then the duct tape stretched and it was dead. Bummer.

Anyway, other than that, it was just a fun chance to talk to a bunch of kids and check out booths. I will leave you now, with the coolest part of the evening. On the main level there was a bar of catered food, but not just any catered food, but catered food that melts the icy hearts of catered food haters everywhere. This event, ladies and gentlemen, had a pretzel bar. 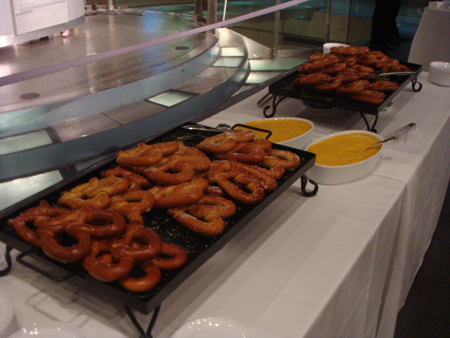 I leave you now to your jealousy, knowing that I om nom nom’d pretzels from a bar last night and you didn’t. Ha.