The Black Eyed Peas' frontman hangs out at MIT.

I got an email the other day from Professor Patrick Henry Winston ’65, SM ’67, PhD ’70 about a blog entry he thought you might enjoy (via Slice of MIT). You may recall his previous guest entry. 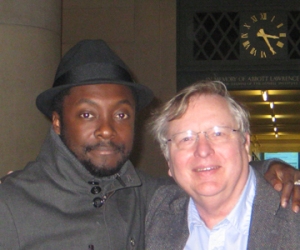 Will likes to see stuff at MIT whenever he is in town. This time I took him to see robots in the Computer Science and Artificial Intelligence Laboratory, wearable computing in the Media Lab, and miscellaneous cool stuff in the Precision Engineering Research Group. It wasn’t hard to find people to help out.

We walked around for three hours. Then, he was off to do soundchecks. A few hours after he learned about energy-storing inverse lakes, he and his Black Eyed Peas played to a sold-out crowd at the TD Banknorth Garden.

And on top of all that, Will is a fan of my field, Artificial Intelligence. Be sure to play the video on the Peas homepage.

Anyway, when Will and his entourage were about to leave, and all the obligatory pictures were taken, he asked, as he generally does, if I could use a few tickets for the show. “Hey, that would be great,” I said. I like the Peas, and besides, I hadn’t been to a good concert since the Rolling Stones were in town in ‘06.

Alas, my daughter seized the tickets. “You’re nowhere near cool enough to go,” she said, “and I have some friends.” Maybe I should find a new place to buy clothes.

Here’s the video Prof. Winston was referencing (will.i.am getting excited about AI):

According to MIT CSAIL, will.i.am is “an amateur robotics enthusiast.” They note, “During his tour of CSAIL, the artist had a look at projects from Daniela Rus’ Distributed Robotics Lab, Russ Tedrake’s Robot Locomotion Group, and Nicholas Roy’s Robust Robotics Group.”

Prof. Winston posted a whole bunch of will.i.am/MIT photos on his site — check it out!

9 responses to “will.i.am: An entry by Prof. Patrick Henry Winston”