A good thing to read as you prepare to arrive on campus and begin your MIT experience. 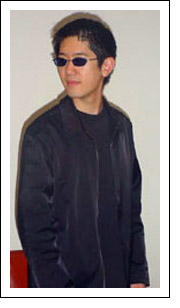 I’m going through my in-box today, taking care of some long-overdue things. I found an entry that Mikey wrote for me that I had intended to publish this past spring. The summer snuck up on me before I had a chance to, and I decided to wait until now instead of posting it in June – this seems like a better time, as people prepare to arrive on campus and start their MIT experiences.

I’m sure some of you will be able to relate to the sentiments expressed below – I just work here and I know I’ve felt this way from time to time. :-)

I am also publishing this because (a) I really miss Mikey, who has left us to attend grad school at the university down the road, and (b) because I’ve been longing to post this picture of him, which always makes me think of The Matrix. (It’s shamelessly borrowed from Mikey’s page over on the Logs site.)

So, some context: Mikey received an email from a student who had been admitted to MIT and was concerned that everyone else would be much better prepared than she. Recognizing her concern as a very common one, Mikey asked her if we could publish their correspondence. Here it is:

So, mainly at this point I am very excited for MIT, but I am having some second thoughts. Concerning my peers. When I applied, I was well aware of the fact that MIT attracts the best and brightest… and I’m a bit worried that I’m not as bright and shiny as the others. For example, almost all the people I’ve talked to have been to the IMO or at least the USAMO or have won some science competition or another (Westinghouse, YES, Intel, take your pick) or have patented something, or have taken their school’s science club to nationals. And I’ve never done any of that… I’m basically a kid who likes math, cats, plants and some plumbing and thought MIT seemed like a cool place because everyone was always building one thing or another, all the time.

But now I’m worried that I won’t be able to catch up to these kids and as a result, coming in with no research experience or major math competition experience or etc. will pull me far behind my classmates and I’ll struggle to get good grades (I know grades aren’t everything, but I’d like to get decent enough grades to apply for graduate school) or find research opportunities or basically show professors that I have something to offer… when in fact I’m not sure I have anything to offer in comparison to the rest of the class of 2011.

I was really psyched to go despite the notoriously huge workload because I was pretty sure that I’d love doing the work, no matter how much there was (I really enjoyed, for example, doing stoichiometry problems and math problems… they’re fun for me, but I don’t have any true talent for them… I’m a “peasant” of a student, not a “poet” if that makes any sense at all), but now I’m more worried than anything. Please feel free to be honest… if you think that my sort of person can still do well at MIT, that’s great… but if not, be as brutally honest as necessary!

So how was your experience at MIT? If you don’t mind, can you tell me a bit about yourself? Like, were you one of those USAMO kids?

Thanks again for your time, and I hope I don’t sound too hysterical :)

And here’s Mikey’s response, which I love:

I had never heard of “Intel”, “Westinghouse”, or “IMO” before coming to MIT. I did not know a USABO, USNCO, or USPhO existed. I didn’t even know science fairs and research competitions existed. No joke. I took the “pre-AMC” (back then it was called the AJHSME, and the AMC was called the AHSME – American (Junior) High School Math Exam), did okay on it, and never went any farther (I had heard of the AIME but wasn’t even close to being considered for that test). And I felt exactly like you even before I applied to MIT. “MIT students are way smarter than me… I must’ve gotten in by accident… I’ll be like the dumbest one there” is what I seriously told myself. And I totally get your “poet” vs “peasant” analogy… people would talk about how “elegant” a math proof was, or how “neat and interesting” the solution was to that physics problem, while I would just sit there and say “heck, did I at least get the units right?” or use brute force to solve the problem in a way that took 20x longer than it should have and said “hey, I still got it right in the end, who cares if it took 2 hours instead of 2 minutes?” Haha.

But anyways, back to the original point. I came to MIT, and seriously, I probably had way more fun than I was supposed to. (Hanging out with friends in my living group, going on road trips, having spontaneous parties, watching TV shows and movies, playing video games… Not all the time, but most of the time. Don’t tell my parents.) Over my four years, I sang with an a cappella group, helped record and produce 2 CDs, sang in a classical group, was part of a religious club, did a UROP, and made many lifelong friends and memories.

But wait… what about the academics?? I graduated with a 4.8 GPA (out of 5.0) – and I honestly had a blast. (I hope that didn’t come off as arrogant – I just wanted to let you know that you can have a lot of fun and still get good grades in your classes!)

Believe me, there was definitely hard work involved (it was not ALL fun and games) but really, you wouldn’t have been admitted if you we didn’t think you could not only survive but THRIVE here academically, socially, emotionally, physically, mentally (and every other “lly” way). MIT is about educating the entire student, not *just* the academics, and the college experience is not *just* the classes – it’s EVERYTHING. You literally passed through *at LEAST* 5 different rounds of screening before you were definitively admitted to MIT; we said “not only can she do the work, but she’s going to have fun, she’ll add to the campus community, she’ll be able to make great friends, and above all, she’s a great match for MIT.” Or something to that extent.

Yes, there are geniuses at MIT, even for MIT standards. I met plenty of them throughout my four years. But you know what? I couldn’t even tell for most of them – I had plenty of friends where I didn’t learn about their special and unique talents until after having known them for 2-3 years (examples: I didn’t learn until junior or senior year that some of my friends consisted of: California State Nintendo Champion… a child TV show star… placed in the Putnam for more than one year… went to Africa to help vision-impaired children… worked on the Human Genome project… owned his own design company… etc… etc… etc…). But when people get here, everyone pretty much leaves a lot of that at the door (unless it comes up specifically). They’re all students just like anyone, eager to meet new people… and it was incredibly exciting to have friends like them.

So don’t worry. I know exactly what you’re going through, and as someone who’s been through it all and is on the other side now, I know you’ll be juuuuust fine. :)

Mikey speaks the truth! So if you’re nervous about your forthcoming arrival on campus, don’t be. Really.

(And Mikey: we miss you! COME VISIT US.)

100 responses to “Wise Words From Mikey”