An MIT- and Boston-centric look at the Italian victory.

Congratulations to Italy on their World Cup victory. The celebration was huge here in Boston, home to a large Italian-American population. Italy is also home to 50+ MIT undergraduate and graduate students.

Despite the American reputation of not being a soccer-friendly country, thousands of fans showed up at Boston’s City Hall to watch the Final: 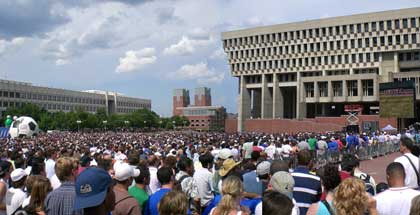 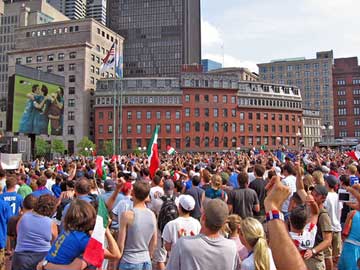 But probably the place to be was the North End, Boston’s Little Italy. So many folks turned up to watch the match that Hanover Street, the North End’s main drag, had to be closed to traffic. You can see the scene below (note the delicious Mike’s Pastry at right): 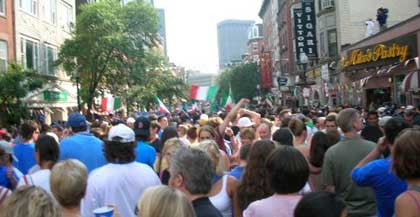 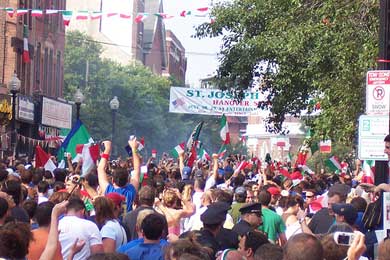 About the Hanover Street celebrations, the Boston Globe wrote:

Boisterous chants and cheers replaced the North End’s usual buzz yesterday when thousands of soccer fans streamed onto Hanover Street to cheer an Italian victory in World Cup soccer. It would be hard to imagine greater excitement in the streets of Palermo.

For France, though, all they have to look forward to is a down market. According to this article, the French stock market is likely to underperform today:

..based on research at the Massachusetts Institute of Technology and elsewhere […] on the first trading day after a country’s team is eliminated from the World Cup, its national stock index on average lags about a half percentage point. That doesn’t mean the market necessarily falls. It means the national index will perform 0.49 percent worse than it otherwise would, all other conditions being the same.

Is it really possible that big-time investors’ disappointment over the outcome of a game would put them in such a bad mood that they would bid down stocks? Yes, according to Alex Edmans , an MIT graduate student and co author of the research.

“The thinking was that the big money managers are dispassionate, but here, we’ve shown even the important people are not computers,” Edmans said. “Even though they’re professional investors, and you might think their day job is to watch the fundamentals, they are human beings.”

But what of the Italian stock market today?

The study did not find indexes rose after victories, perhaps because overconfident fans take victory for granted. “If you ask most supporters, they always think they’re going to win the World Cup,” Edmans said.