On Friday evening, I was lounging around being bored. There were other people on 5th East doing the same thing, so we sat under the red lights of Black Bemis and talked, which is a popular quiet-night activity on 5th East.

We were soon joined by Lex ’00. One of my favorite things about the culture I live in is that many alunmi stay involved for years after they graduate. I enjoy talking to them – well, most of them – because they have stories, and they have useful advice, and a sense of history and perspective. Lex is one of our more active “cruft” (a term meaning either alums who hang around, or defunct electronic hardware) and was really supportive and helpful to me back when I was running for UAVP (Undergraduate Association Vice-President – everything at MIT is a number, abbreviation or acronym), giving campaign advice and showing up to watch my debate. He could relate; he used to be UAVP himself! In fact, he was Matt‘s VP! Small world, right?

Eventually, I went down to 1st East to check out their dance party. They are the proud home of the famed Disco Dance Floor. I took a picture of people dancing, but I’m not such a great photographer and the pretty colors didn’t come out very well. :( You should go to the link I provided instead of me putting the picture up, because those are good photographs. I was going to leave the party and go out with a bunch of friends at midnight, but got distracted by Dennis ’08 and Bethany ’06, who were watching Star Wars in 6-120.

On Saturday, a bunch of 5th East walked to Sicilia’s Pizza for dinner. We’d all ordered it before for delivery, but we’d never been to the restaurant, which is near Boston University, so we decided we’d have an adventure. It ended up being more adventurous than we thought, because as soon as we stepped onto the Harvard Bridge, a storm hit, and the rain blew horizontally and soaked the right halves of all our bodies. But it was good food!

But Sunday was a pretty day. My room gets particularly sunny on nice days, and this attracts cats, like Nietzsche here: 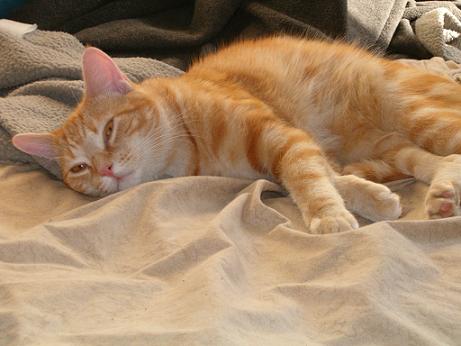 Some halls and dorms allow cats, some don’t. Nietzsche belongs to Sarah ’08, and has spent about seven of the roughly eight months of his life on hall.

When the evening came, we decided it was such a nice day that we should have a barbecue in the East Campus courtyard. 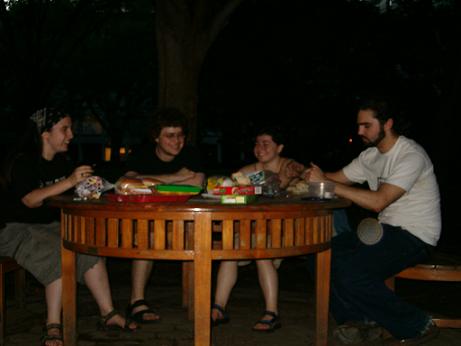 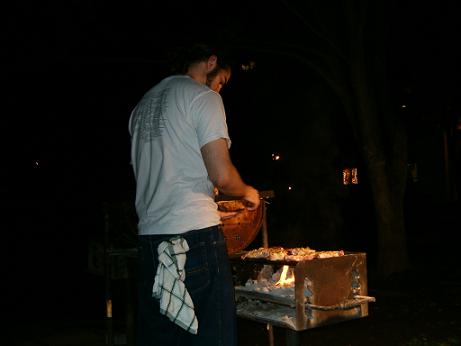 Matt puts chicken and pork chops on the grill.

We had company, in the form of Joe Foley, a Senior Haus GRT (Graduate Resident Tutor). He’s been around a long time, having received his undergrad degree in ’98, and is one of the most famed of the legendary crazy characters we get around the east side of campus. *grin* 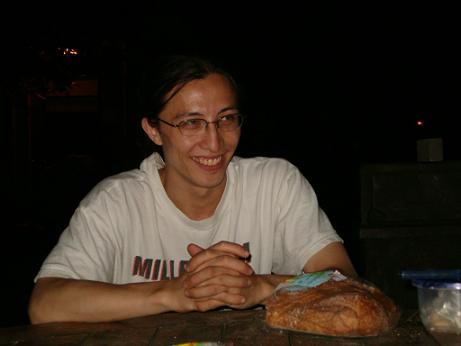 At 10, I went to an EC Rush meeting. Well, I suppose it’s technically a “REX meeting”. But one thing you’ll notice – students don’t actually call Dorm Rush “REX”, except when they need to be official. And even then, they sometimes slip up.

Our Rush Chairs are the ones in charge of making sure the dorm is on schedule preparing for Rush. Each dorm has its own. At EC, we consider Rush a big deal, so we have three of them. Here they are sitting on the couch that’s against the wall, which at EC is a signal of being in authority: 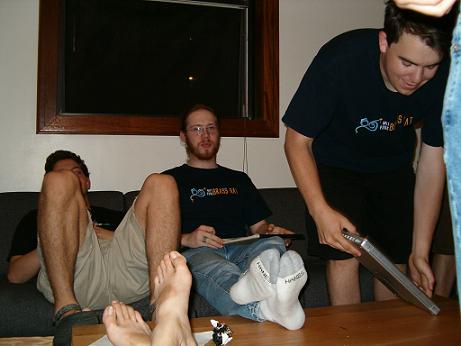 We have an impressive set of Rush Chairs this year. Schuyler is also the Rush Chair for all of DormCon! Vogt is the EC Desk Captain, and some other interesting stuff. And Harvey is the EC President…and the DormCon President! Clearly, EC Rush will be awesome this year. If you’re an incoming frosh, you should make sure to come. Actually, you should make sure to visit as many dorms as you can during Dorm Rush, so that you can decide for sure which one you want to live in – I know you picked over the summer, but come on, would you buy a house before you’d visited all your options in person?

One response to “Yay, weekend!”