a list of things i can't make myself do, and a few i can

It’s a Wednesday afternoon, and I sit in my dining room and stare at the problem set on my computer screen, neck craning down. The music in my ears is loud—too loud, frankly—but it’s all I can do to block out the endless noise of constant motion that comes with living in a house of seven people. I read over the problems again, eyes moving to and from the class notes open on the other half of the screen. Nothing sticks, and my eyes both dart to and from material and see nothing at all. It’s been twenty minutes of this, the ache in my neck slowly appearing as if on cue.

My mind buzzes at the thought of literally anything besides schoolwork, and as my roommates come down to grab cups of water or make friendly conversation amongst each other, I preemptively take out a headphone as I prepare to be distracted. All the while, I hear the voice in my head that tells me I have to work, that begs me to find the concentration I had just weeks ago. I try to ignore it for the most part, giving it a small space in a corner of my mind where it slowly eats away at my mood until I’m completely soured and stressed by bed time.

Even though the answers are clear as day,⁠01 could it be the global crisis we’re in? the fact that i don’t have enough desk space in my room and need to work in a high traffic space? or maybe it’s the fact that my facebook feed has become a string of memorials, a digital graveyard, from people back home in new york? part of me still doesn’t comprehend why everything has suddenly become so difficult. My brain keeps drawing me back to a cycle of self-blame, taking root in my head and placing it’s foot down when I try to be kinder to myself. Why can’t you just finish? Why can’t you just work? Why have you become so useless?

I shudder to think about what my grades would have been if MIT hadn’t implemented a pass/no record grading system across the board. I have to admit that initially, I’d been quietly upset by that. I felt like my stride was being cut short, and I thought I could finish the semester in the same sprint. At first, I did—I finished assignments over Spring Break and caught up on most of the work I had to do, putting myself in a pretty good spot when we finally returned to classes. And then, it all just fizzled away. The trained control I had over my time and work had slipped out of my fingertips. I couldn’t get myself to finish the last remaining work I had due, work that had already been pushed back due to the quickly changing schedule. And now, thrown back into the semester, I’m finding it even harder to continue learning and studying like nothing is wrong.

There are a lot of things that have become infinitely more difficult in the past few weeks. I can’t:

I know I’m not alone in how I feel. People everywhere have been writing think pieces about the inability to work, or the crushing feelings of loneliness, and how to try to remedy these. According to these, I’m doing a lot of things right—I’m maintaining a sense of normalcy, keeping my morning routine, going on walks to simulate my commute to class, and maintaining a consistent eating and sleeping schedule. I have people around me. And despite all this, my brain just can’t function the way it once did, and I can’t help but blame myself even though I can’t control the state of the world. I read another post along these lines circling around on Facebook that included a simple addition to Maslow’s Hierarchy of Needs, which I’ve recreated badly for the sake of potential copyright infringement: 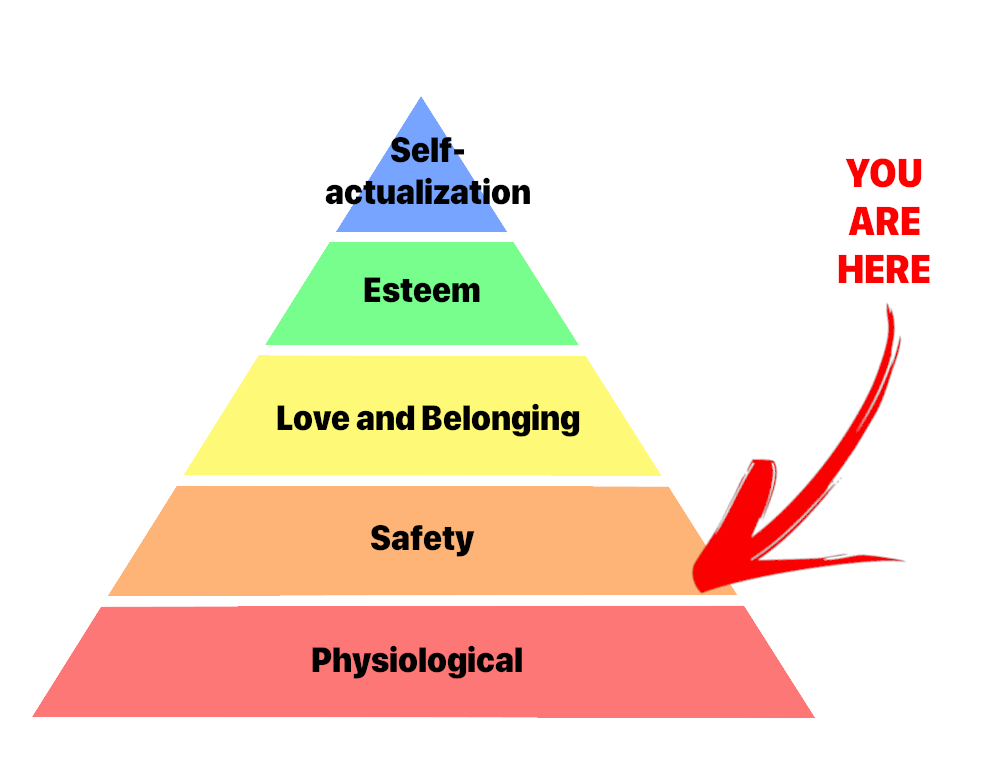 Like being lost in a sprawling mall at the age 7, just the words You Are Here are enough to put me at peace, knowing I’m not the only one who’s getting lost. Thinking of it this way really helps contextualize what I’m—what we probably all are—collectively feeling. With the focus on survival and safety, both for ourselves and the people around us, it only makes sense that there’s less capacity to do other things. There are a lot of things I am trying to accept, like knowing when I simply can’t do something (and that it’s no one’s fault), and it’s okay.

For everything I can’t seem to do, there are a lot of things I can do, even if they feel much more meaningless and less productive. I can:

For now, they keep me going until the next day, and that’s enough.