Four years ago, Melis ’08 posted a list of the “101 Things To Do Before You Graduate” for her graduating class.

That was right when I entered MIT.

Now, four years later, I get to post my own version – courtesy of Grace ’11, since I have long since lost my own copy due to the chaos of the intervening years.

(basically, the backstory is that at freshman Orientation, each incoming MIT student gets a copy of some version of this list, which is actually different from year to year – if you compare Melis’ to mine you can note the differences – I guess significant “MIT things” change from year to year :p)

I have not seen this list since my freshman year, and I just asked Grace to take a photo of her list so I can see what the heck was on it – I was quite surprised actually, considering that I never went out of my way to do anything and most of the list happened :) 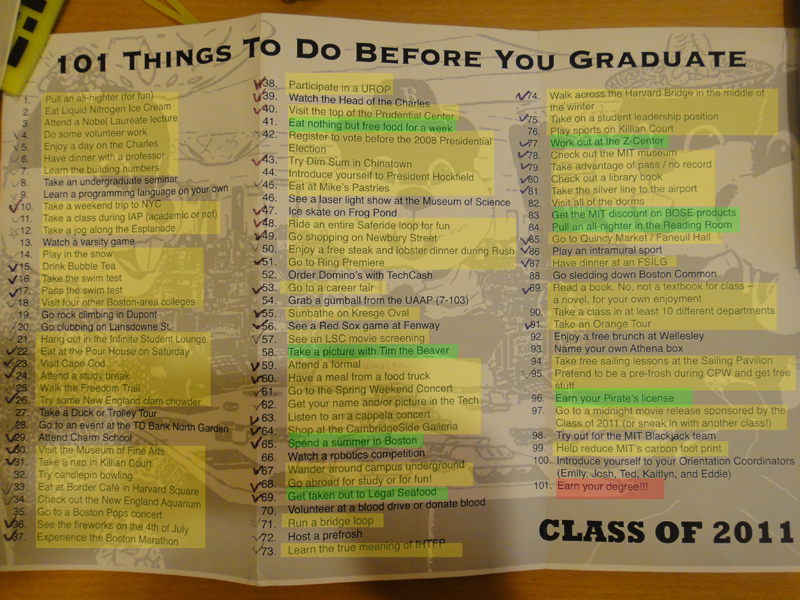 THINGS I DID DO (yellow)

1. Pull an all-nighter (for fun!) – for fun, or not for fun, I think I had a bit too many of them in college >____< one of my friends that I respect tremendously at MIT kept a regular 10 PM to 7 AM sleeping schedule all four years, and I’m extremely envious of the level of her self-discipline. As for my own sleeping schedule….let’s just leave it at that :)

I never did drink coffee though – CAFFEINE IS BAD GUYS. QUIT WHILE YOU CAN. <– this at least I am proud of.

2. Eat N2 ice cream – you are not allowed to graduate from MIT if you never had liquid nitrogen ice cream. I’m serious.

15. Drink bubble tea – the week before I left the US, I LEARNED how to make bubble tea, out of frustration of the $3.50 cups in Boston that don’t even taste that good (I never lost my high Taiwanese standards for bubble tea =p) I hope to be making lots more in the future! :)

23. Visit Cape Cod – we did this last year after finals.

30. Visit the MFA – MIT STUDENTS HAVE FREE ENTRY!!! this is one of the most awesome perks about our student ID – I’ve been there too many times to count :) I even did research there! =p

31. Take a nap in Killian – it’s amazing there when the weather starts turning reallyyyyy nice around late April-early May. hehe.

33. Eat at Border Cafe in Harvard Square – their (endless) chips and salsa are amazing. I don’t care for most of their other dishes though…very meh.

35. and 36. Go to a Boston Pops concert and see Fourth of July fireworks – Boston Pops performs live at the Hatch Shell in Boston on July 4th each year, and then there’s fireworks immediately following on the river – did both of these freshman summer when I spent about five weeks in Boston. :)

38. Participate in a UROP – did you know something like 80%+ of students here do a UROP? I worked with C. elegans all four years here, beginning from freshman spring. Although doing UROPs are fun and a nice way to earn credit/money here, I decided that it’s not something that I’d do for a living. The undergrad research opportunities here are AMAZING though, and you’re missing out on a key part of the MIT experience if you never did a UROP.

42. Register to vote before the 2008 Presidential Election – been there, done that. Voted for Obama and Kerry for MA senator.

44. Introduce yourself to President Hockfield – as a matter of fact, I did this my very first week at MIT. President Hockfield visited my dorm and I got to talk with her at length :) A few months later, we invited her to a dinner at our fraternity too!

45. Eat at Mike’s Pastries – I don’t know how many times I’ve bought my Boston-touring friends to Mike’s, even though I have not tasted their cannolis for two years. I don’t really like dessert, much less cannolis, haha =p

51. Go to Ring Premiere – read about ours!. Back in our day, blogging about Ring Premiere used to be a BIG DEAL – hey new bloggers, what happened?!

53. Go to a career fair – yeah, but not since my freshman year – check out all the free swag that HaoQi ’11 collected. I guess one of the good things about going to med school is that we don’t have to worry about a “career” for another, oh, 4-6 years, haha.

57. See a LSC movie screening – again, one of those things that you do over and over again at MIT that I’ve kind of lost track of how many movies I’ve seen at LSC – so many good memories and at $4 a movie (mostly new releases too), it’s a sweet deal!

60. Have a meal from a food truck – food trucks basically fed me for all of my freshman and most of my sophomore lunches…then I took a long hiatus from them till late senior year, when I started tasting them again and realizing that they’re still pretty good :) then also sometime in the middle, clover came along, and their rosemary fries changed a lot of things :)

61. Go to the Spring Weekend Concert – yup, I’ve been to one and volunteered at one (when Sara Bareilles came my junior year). I was pretty sad that I missed Jason Derulo this year because I was at Brown, though. :(

62. Get your name and/or picture in the Tech – I wrote an opinion piece for them! :)

74. Walk across the Harvard Bridge in the middle of winter – you’ll freeze your ears off. do at your own risk.

79. Take advantage of pass/no record – I don’t think I’ve crammed for any class at MIT as hard as I did for 7.012 =p I might have had a bit too much fun while trying to pass that class…

80. Check out a library book – are you kidding me?!?! A library book? dude, I think I’ve checked out >150. =p (so frequently for my history papers that I actually asked the librarian once whether there was a cap on the limit of books you can have – he answered, uhh…well, we never had a problem with someone having too many books before, so i guess there isn’t a limit? haha)

81. Take the silver line to the airport – how else do you get to the airport? lol. I’m too poor to take a taxi, and blue line isn’t any faster.

82. Visit all of the dorms – I actually did this during my first week on campus, at REX my freshman year :)

94. Take free sailing lessons at the Sailing Pavilion – Sailing PE counts, right? take it! it was so fun (that and pistol :P)

95. Pretend to be a prefrosh during CPW and get free stuff – FACT: I have been mistaken as a prefrosh all four CPWs – yes, even this last year fraternities tried to rush me and I was like errrr WTF I’m a senior!

97. Go to a midnight movie release sponsored by the Class of 2011 – The Golden Compass!

THINGS I KINDA DID (green)

41. Eat nothing but free food for a week – I’ve eaten A LOT of free food on campus, but for a whole week is actually kind of hard to do. I think I’ve gone about 3-4 days, before getting really sick of pizza. Apparently there is an email list that you can sign up that tells you where the free food is on campus so you get some variety and don’t have to keep eating pizza =p To date, I’ve known only one person who had successfully done this (she did it for almost a month, though, which is really impressive)

58. Take a picture with Tim the Beaver – I’ve actually never done this, but I’ve BEEN Tim so many times! (including at the CPW Closing Festival last year if you were there ;) hehe) Does that count?

65. Spend a summer in Boston – I never spent a whole summer, but 5 weeks during my freshman summer? Does that count? :)

69. Get taken out to Legal Sea Foods – as a guy, we don’t really get “taken out” – but I’ve been “taken out” there by my parents, which I’m not sure counts or not, haha. I suppose I could have had a professor-student dinner there (where the Undergraduate Association subsidizes a dinner for a group of us students to take a professor out to dinner) and have that count, but I never had one at Legal’s. It’s a tourist place anyway. =p

77. Work out at the Z-Center – I only swim there…I’ve never been to the weight room upstairs?

83. Get the MIT Student Discount on BOSE Products – I’m about to do this…hope they still let me do it! I forgot to do this before I graduated :( haha. For those that don’t know, BOSE offers discounts on all their products to current MIT students because Bose the founder was a professor at MIT :)

96. Earn your Pirate’s License – at MIT, a “Pirate’s License” means taking 1) Sailing, 2) Pistol, 3) Fencing, and 4) Archery for your PE classes (conveniently, four are required to graduate). I have half a license, having taken sailing and pistol. I took Salsa and Ballroom Dancing for the last two PEs – can I be a dancing pirate? =p

THINGS I DIDN’T DO (white)

9. Learn a programming language on your own – mm, I’m not going to count MATLAB, which I truly learned on my own. I had too many bad experiences with Python in high school, so I ran as far away from programming as possible at MIT. I didn’t mind and it didn’t ultimately matter :)

13. Watch a varsity game – sadly, most MIT students don’t really support their sport teams by watching the home games, even though we have so many athletes among us. unfortunately, I am one of them. I’ve caught bits and pieces of games through my four years here but never managed to stay for a full game. :(

20. Go clubbing on Lansdowne St. – I didn’t know what Lansdowne St. was until right before graduation, hahahahaha. Guess someone really likes to party! =p

27. Take a Duck or Trolley Tour – I actually have never done this.

28. Go to an event at the TD Bank North Garden – we’ve been meaning to watch a Celtics game for ages but it never happened (same as a Red Sox game at Fenway, actually – #56)

29. Attend Charm School – I actually was in town this year for Charm School (first ever opportunity since I spent the first three IAPs abroad), but was too tired to go to any of it =p

47. Ice Skate on Frog Pond – Again, one of those things that I meant to do but never did :(

72. Host a prefrosh – my sophomore year I signed up but whoever was assigning prefroshes ignored me :( I was too busy to host for the other years =/ (also, my room is really cramped, haha)

100. Introduce yourself to the Orientation leaders – yeah, nice try, guys.

LAST BUT NOT LEAST! 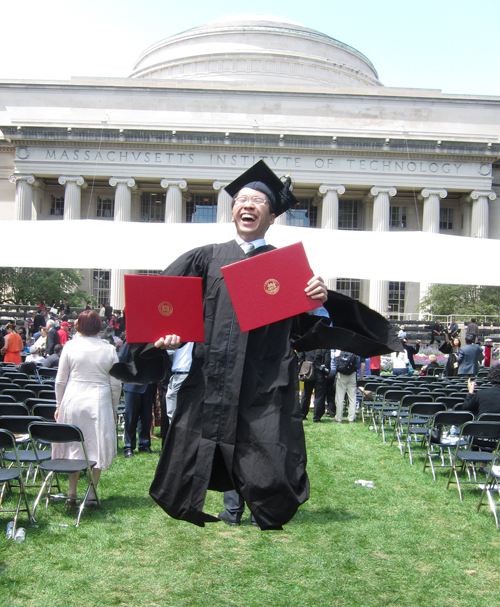