"Hey baby, I motion for an one-on-one unmoderated caucus!"

So, the Early Action deadline came and went. For those that submitted EA applications, good job and best wishes! :)

On November 7, I received an email. To be honest, I was very surprised that someone noticed this fact. The note was short and simple:

“Should I be expecting an entry today? ;)” [name omitted by request]

Kudos to you and your eagle-eyed observation skills! Indeed, I was planning to draft an entry on November 7, but I had to call it off because I was too busy tooling psets and recovering from sleep deprivation.

(If you haven’t noticed, I have been drafting on a 12-day posting schedule. It wasn’t deliberate in the beginning but I wrote the third entry intentionally on October 26 because I wanted to keep the “pattern” =p) 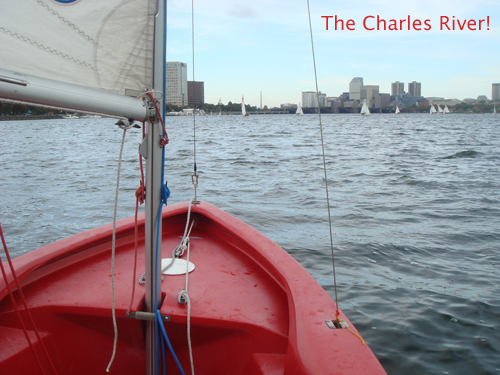 Before the weather turned cold, Allen and I went sailing for the last time. Allen was my sailing partner in the Sailing PE class that I took during first quarter, so we went out again after the sailing season was officially closed for the year.

Every student that graduates from MIT is required to attain 8 PE points before the end of his/her sophomore year* as part of the PE GIRs (General Institute Requirements) set down by MIT (which also entails an 100-yard Swim Test). Students may satisfy these points in a variety of ways. If you take a standard Physical Education class during the term, it generally gives you 2 points and lasts for one quarter (about 2 months). You can also gain points for PE courses taken during IAP (like skiing!) and special PE classes like backpacking for a weekend in the White Mountains. The PE course offering at MIT is incredibly diverse, ranging from sailing to pistol to ballroom dancing to scuba diving to skating – and I’m only scraping the surface!

I took Sailing the first quarter and learned how to set up and operate a Tech Dinghy, which is the most basic type of sailboats at MIT. In order to take Sailing, you will also need to pass a “Boating Test” after your Swim Test offered in the beginning of the year, and it basically entails being able to tread water for ten minutes (hey – you also get to chat with the other people who are taking the boating test while bobbing up and down in the water!).

When I first arrived at MIT, I must admit that I was somewhat disheartened that Physical Education, a class I hated intensely disliked in high school, would follow me to college. However, through taking sailing, I started thoroughly enjoying the experience, sometimes even looking forward to another afternoon on the Charles River. In high school, I always felt that PE was something tedious to get through, a class that didn’t mean much but still provided a grade on the transcript. At MIT, after browsing the incredibly extensive PE course listing and going through my first PE class, I’m amazed at all the sports/activities that one can learn here through the Physical Education program (ALL FREE for the vast majority of classes!) It provides a much needed diversion from the tedium of too many problem sets, and provides entry-level instruction without requiring prior experience in most classes. I’m taking Pistol this quarter, and I’m also enjoying it. :) 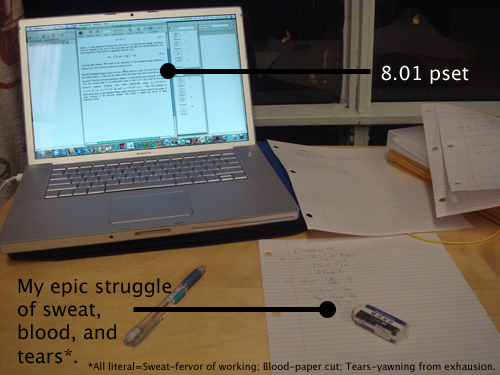 For most of the first half of last week, I basically lived in Libraries and Study Rooms for the majority of my evenings. I had a big paper due in 17.40* last Tuesday, so I was holed up in Dewey Library (the social science library), voraciously consuming more than 1000 pages of primary text on international terrorism on Monday. On Tuesday night, I was dozing in Hayden Library, exhausted from completing the 8.01* pset (problem sets, or MIT’s more-sophisticated way of saying “homework”). On Wednesday, I was working the night away in Barker Library, studying 18.02*. I love the different personalities of each MIT library, and that’s why I chose to do the majority of my work in them, frequenting them in cycles like what I did in the first half of this week. I will blog about them soon, stay tuned! 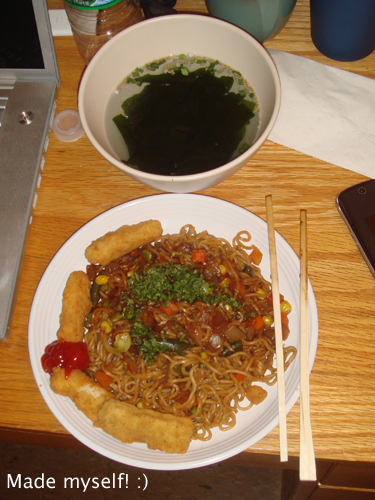 Of course, after working hard on the psets, there is always some much needed repast. I may not be the greatest chef, but I am happy to say that I have discovered the art of frying Japanese noodles.

(after all, Anyone Can Cook, right? Ahh, Ratatouille love <3)

Of course, there’s a reason for working this hard the first half of this week. I was leaving on a MUN conference! :) 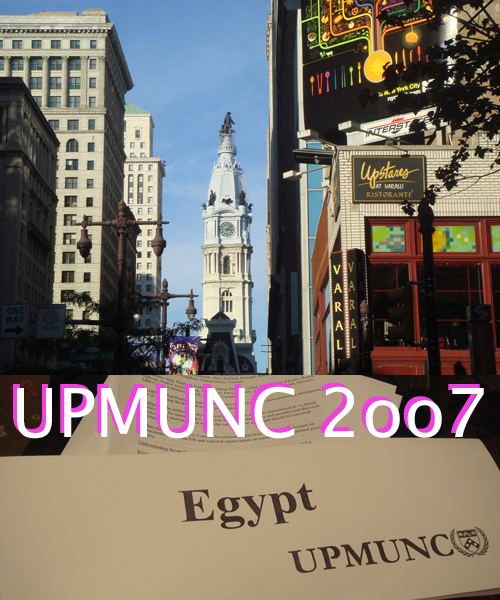 A short explanation of MUN (for those of you that might not know what it is):
Model United Nations is a simulated conference of the actual United Nations. Each student attending the conference typically represents a country in a specific council (they’re called “delegates”). For example, a student may represent Iceland on the Economic and Social Council of MUN that deals specifically with the issue of Global Pandemics. The conference is comprised of many different councils (many of which actually exist in the UN – different General Assemblies (Human Rights, Global Security…) and more specialized councils like the UN Security Council and the Economic and Social Councils (ECOSOCs), for example), and each council tries to reach a solution on an issue designated by the conference staff prior to the conference by passing resolutions. Other students (generally the students from the hosting school) called “Chairs” conduct the meetings and ensure order and smooth proceeding during conference. Meetings are conducted in formal United Nations rules of order, so everything is very procedural and orderly (most of the time).

For all you visual learners, here’s a Dummy’s Guide to how MUN works: 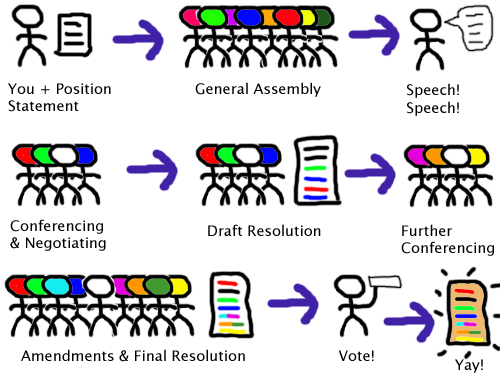 I’m sure you enjoy the artistic-ness of my stick figures. The sketch is a VERY simplified version of all the negotiations, debates, and bantering that go on during conference, but that’s the spirit of the conference. Aside from formal debate, there’s time to explore the city, meet the delegations from other schools (there’s more than 60 colleges present!), and just have a good time in general: 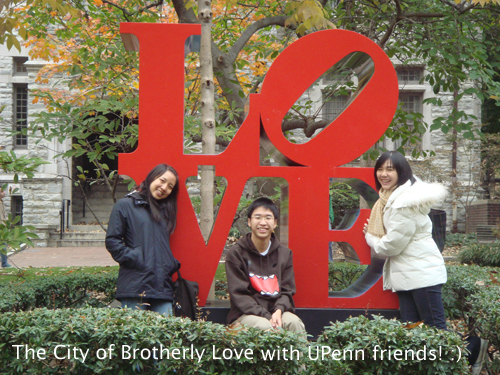 I ventured over to UPenn… 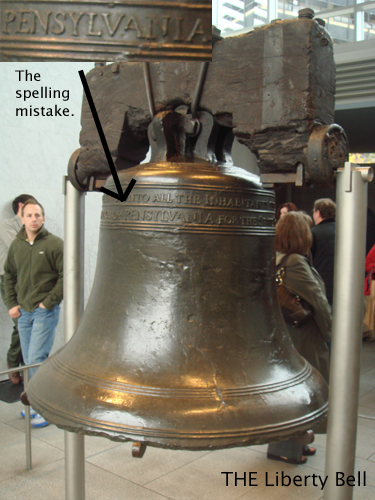 Saw the Liberty Bell…(did you know that there are 55 Replica Liberty Bells scattered over the United States?) 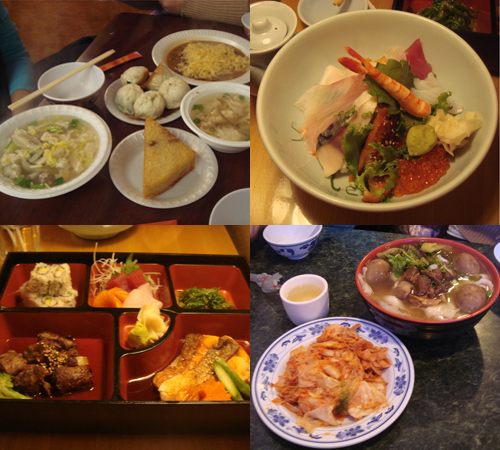 Had some amazing food…(I didn’t intend to just take pictures of the amazing Philly Asian food. I actually had Philly Cheesesteak and some great grilled food but forgot to take the pictures =/) 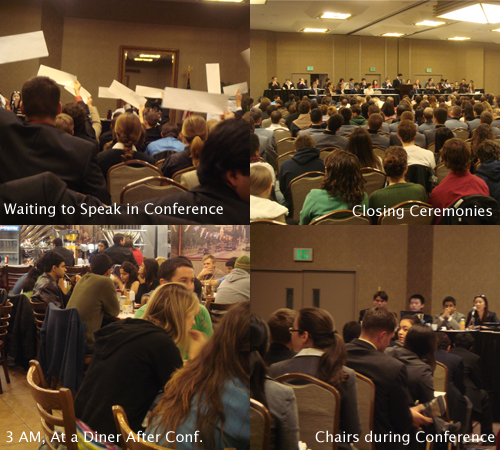 And, of course, spent a lot of time in committee drafting and debating resolutions!

Yup, so that was my two weeks in condensed form.

Now I’m ready to tackle the next onslaught of psets and exams.