Imagine, if you will, the following situation…

You join a dense crowd of people filing through a set of double doors. You are flanked by people ushering you inside; the person nearest you hands you a pair of glasses to wear for the upcoming experience. You pass through another doorway and enter a room that has been engineered to optimize the room’s acoustics.

From one lateral end to the other, all you can see are rows of chairs, broken only by two sets of stairs. As you go down toward the front of the room and find a seat, you hear a hushed anticipation that swells and grows increasingly palpable.

You may have heard about the experience from your friends, and you just want to see what all the excitement is about. Or you may be entering into everything with an open mind and absolutely no assumptions. But judging by what’s being projected on the massive screen, you can tell that it’ll be memorable.

Now if you were to take a guess, what would you think I was describing? Watching Avatar in IMAX 3D?

Nope, that was me talking about a special 5.111 lecture. And yes, you do get glasses. They look like this: 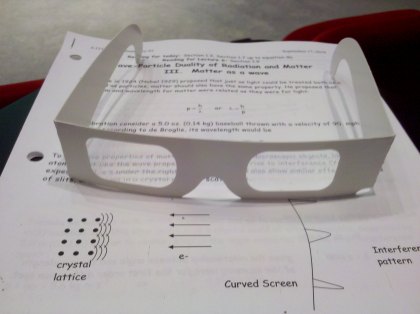 Unfortunately, I was deliberately misleading with my title. They’re not 3D glasses. They do, however, allow you to refract certain types of light to get not one rainbow – or even double rainbows! – but a few that appear in a star-like pattern and radiate from the light source.

It’s a phenomenon that is so epic, particularly in the context of a chemistry class, that no amount of astonished screaming or shaky cinematography can quite do justice to it. (Nor can any photography, apparently – though to be honest, I had no idea whether putting the glasses over my phone’s camera lens would actually get the same result.)

And in a previous lecture, we had this setup: 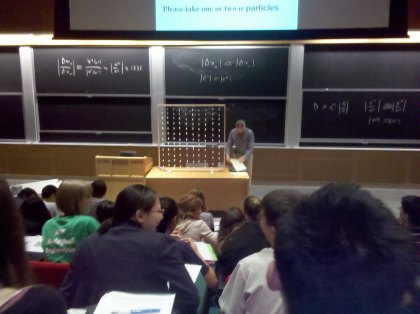 Yes, that’s a gold “foil” fashioned out of string, ping pong balls, and what looks to be a wooden frame. Our aim was to estimate the radius of the ping pong balls with the same calculations that Ernest Rutherford used when he shot alpha particles at a gold foil. Rutherford, of course, did it to get a clearer picture of atomic structure.

As for this class…well, I’m sure there was some learning done that day, but I’d be willing to bet that most of the students walked out with that sort of satisfaction you can only get from throwing ping pong balls in a lecture hall.

“It’s considered bad form to aim at your professor!” – Prof. Bawendi, shortly before the class threw a ton of ping pong balls.I’ll admit it: if lectures explained scientific concepts using ping pong balls, I’d probably be getting a lot more out of them.

And honestly, that’s pretty much the concept behind much of the learning at MIT: Mens et Manus, our school’s motto, which means “mind and hand.” If learning the concepts in strictly theoretical terms isn’t quite cutting it, then the professors, knowing this to be the case, will decide to throw in a few ping pong balls and illustrate the lesson that way. (Or do something else to imbue your theoretical, abstract learning with a lot more practical substance.)

It’s not just a chemistry thing, either. The physics department at MIT is notorious for their (Stuffed) Monkey and a Gun demo, which shows us all that…you can hit falling stuffed animals with mini-cannons loaded with golf balls. 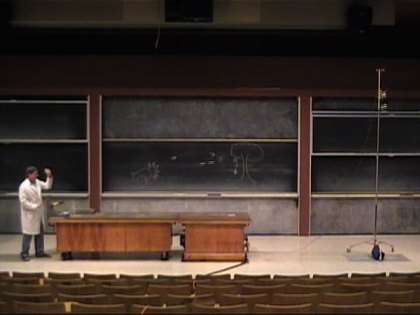 We consider shooting stuffed monkeys a jolly ol’ pastime here at MIT.So if you were never a big fan of science before, you may find these interactive demos to be persuasive in changing your mind – or, at least, in letting yourself think about subjects like chemistry and physics in a different light.