Hello! The 2.009 final presentations were two weeks ago, and it was AMAZING. If you haven’t seen the 2.009 intro video please do, it’s beautiful.

If you want a summary of what 2.009 is about, Chris made a post. 140 students were divided into 8 teams. Each team had three months and $7000 to develop a product based on a theme: this year, it was “Rough, Tough, Messy.” Each presentation was seven minutes long followed by four minutes of Q&A. From interactive climbing to portable AEDs, I felt that all the products really did embody the spirit of this year’s theme.

A super quirky band played music from both sides of the auditorium, all the presentations were amazing, the video editing was really well done, there was cheering everywhere, and there was confetti. Lots and lots of confetti. I could definitely see why 2.009 was one of the most famous classes at MIT.

Although I’m not very knowledgeable on how 2.009 works on the inside (if you do want to know, this is a really great blog post), I wanted to give a recap of all the final projects, so here goes~

There’s a shift in arcade games towards simulated sports games that promote excercise and activity. Gravity balances challenge, competition, and strategy by having kids scale a moving rock wall. There are three levels of speed that correspond to the strength of a planet’s gravity: Moon, Earth, and Jupiter. You start off with three lives, and every second you survive gives you 100 points. Every time you touch an asteroid, however, lose a life. When you lose all your lives the game is over. There’s a highscore system so that you can compete with your friends. 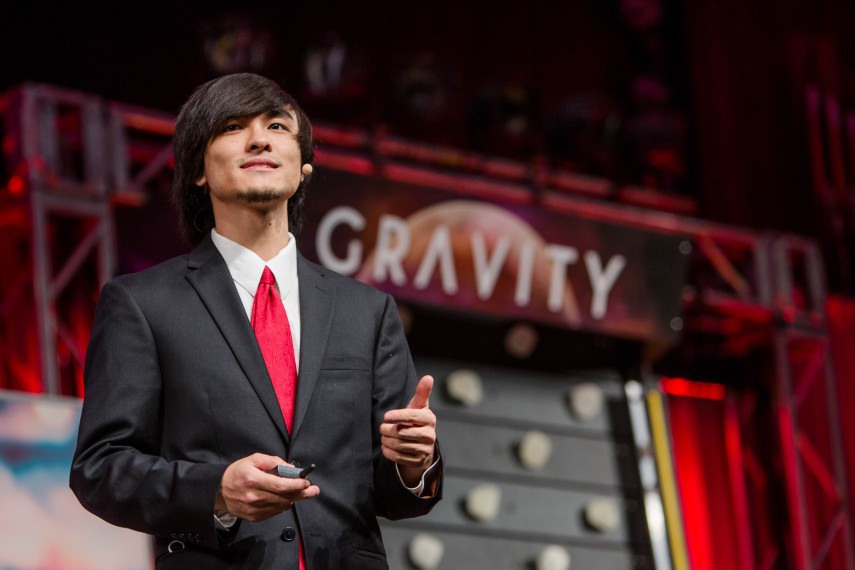 all picture credit: 2.009 staff and students

How does Gravity work? The user console sends a wireless message to a master controller which relays that signal to a motor controller, which drives the motion of the wall. On the back of each moving panel, a printed circuit board (PCB) is attached which controls both the LED rocks and the capacitive touch sensing to detect a user’s hand. In essence, the entire rock wall is an interactive game console. We got to see a demo in action! :D 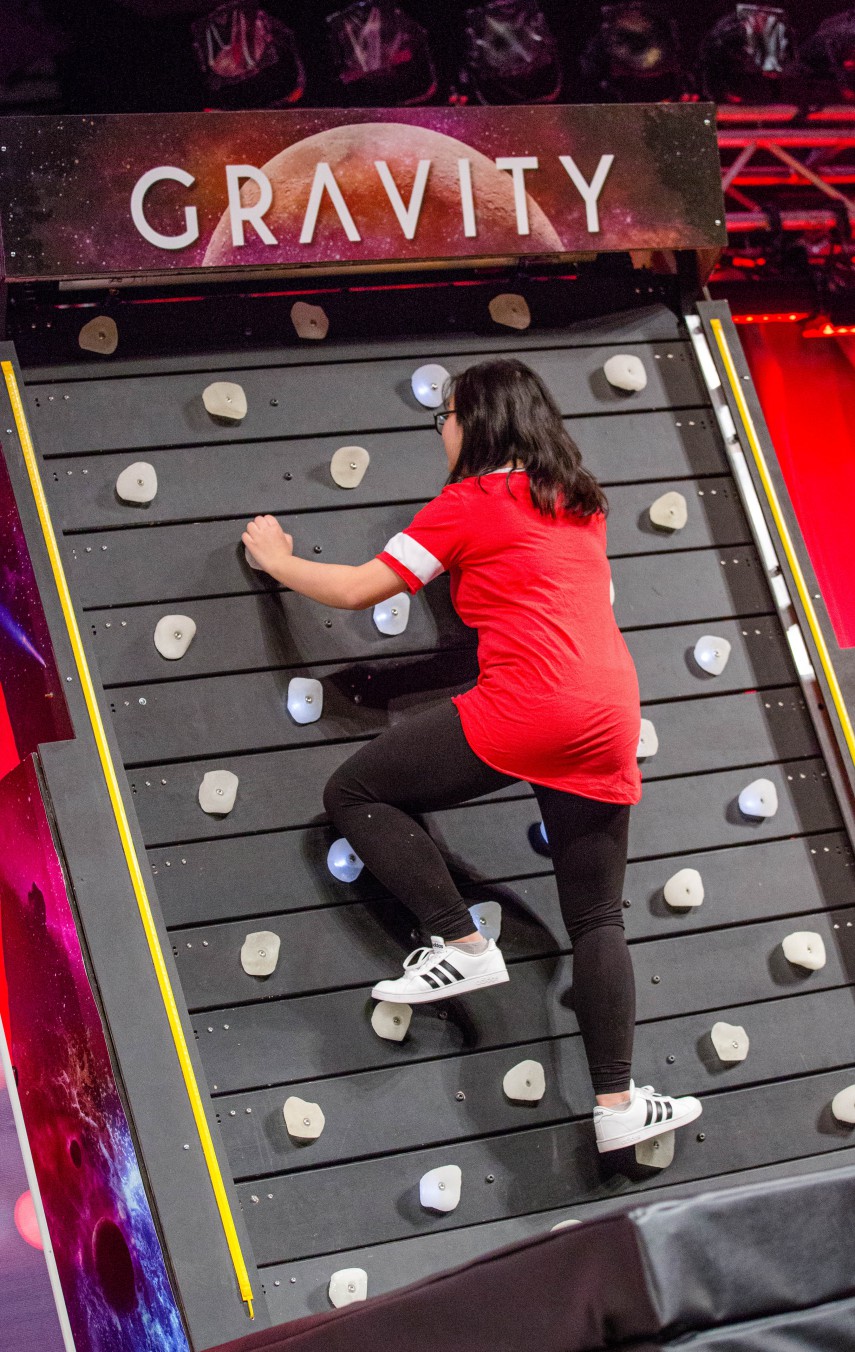 The biggest concern for Gravity, they felt, was safety. So the handholds were padded and rounded to make sure there would be no chafing or splinters on the fingers.

The problem that Yellow Team identified was that for guitarists, it’s hard to write down your musical ideas since you always have both of your hands occupied. The solution was Strum: an attachment for your acoustic guitar that can automatically transcribe what you play into a guitar tab. (Note that this is different from a MIDI or sheet music format, since a guitar’s fingerboard is not one-to-one with the different possible sounds it can make.) Tabs are useful because they not only show you which note you should be playing, but where on the guitar you should be playing it. 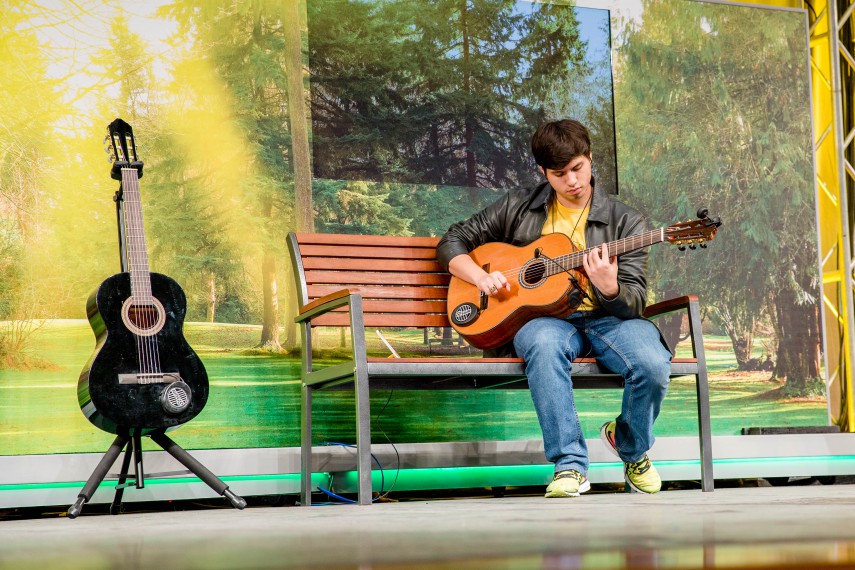 Although the final prototype of Strum looks really polished and clean, it wasn’t always that way: here’s a picture of an earlier prototype! 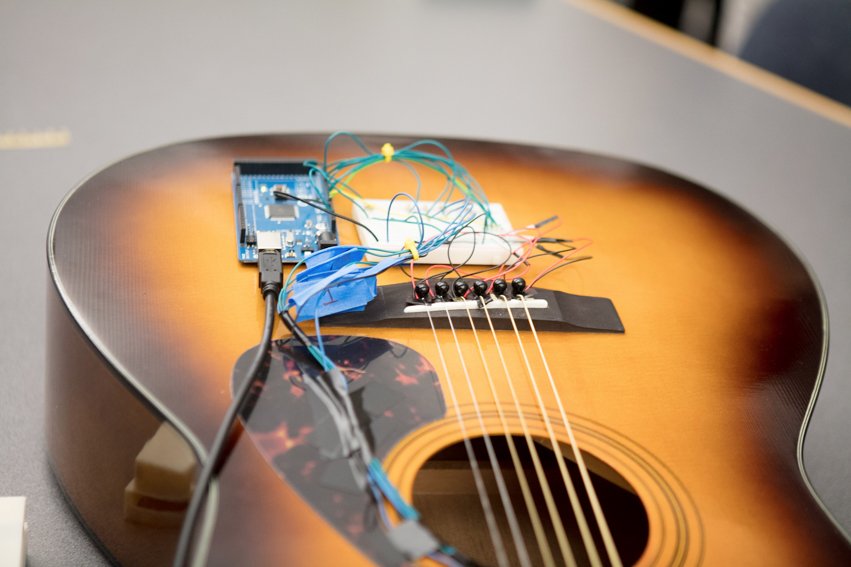 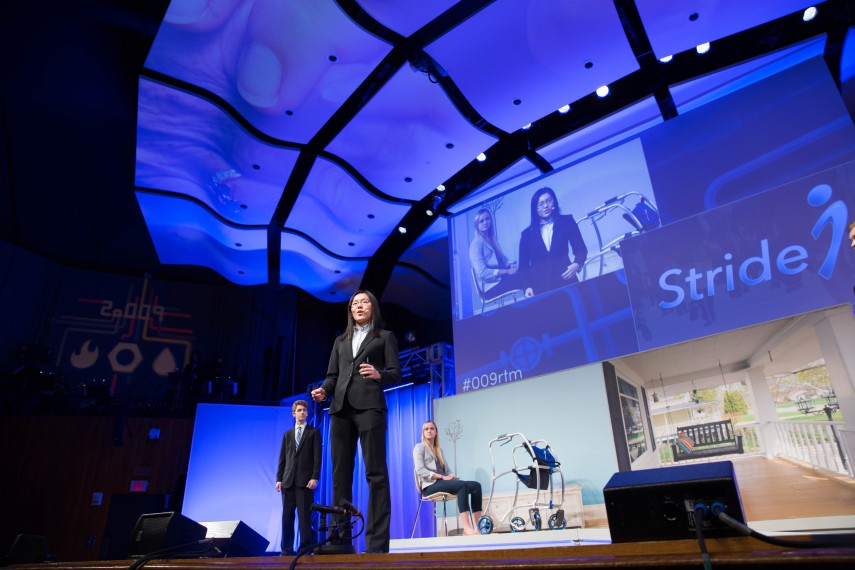 A problem with walkers is that one often struggles while going down ramps or inclined planes as the walker rolls away from the user. Many walkers use brakes to solve this problem, but users may often forget to turn the brake on or off. That’s where Stride comes in: it’s a sleek, ergonomic, and automatic option that remembers to brake for you. Whenever your hands are off the walker, the walker’s brakes are active. So, you can walk with your walker when you want to walk! :D (That was a lot of w words in a row, try saying that five times fast.) 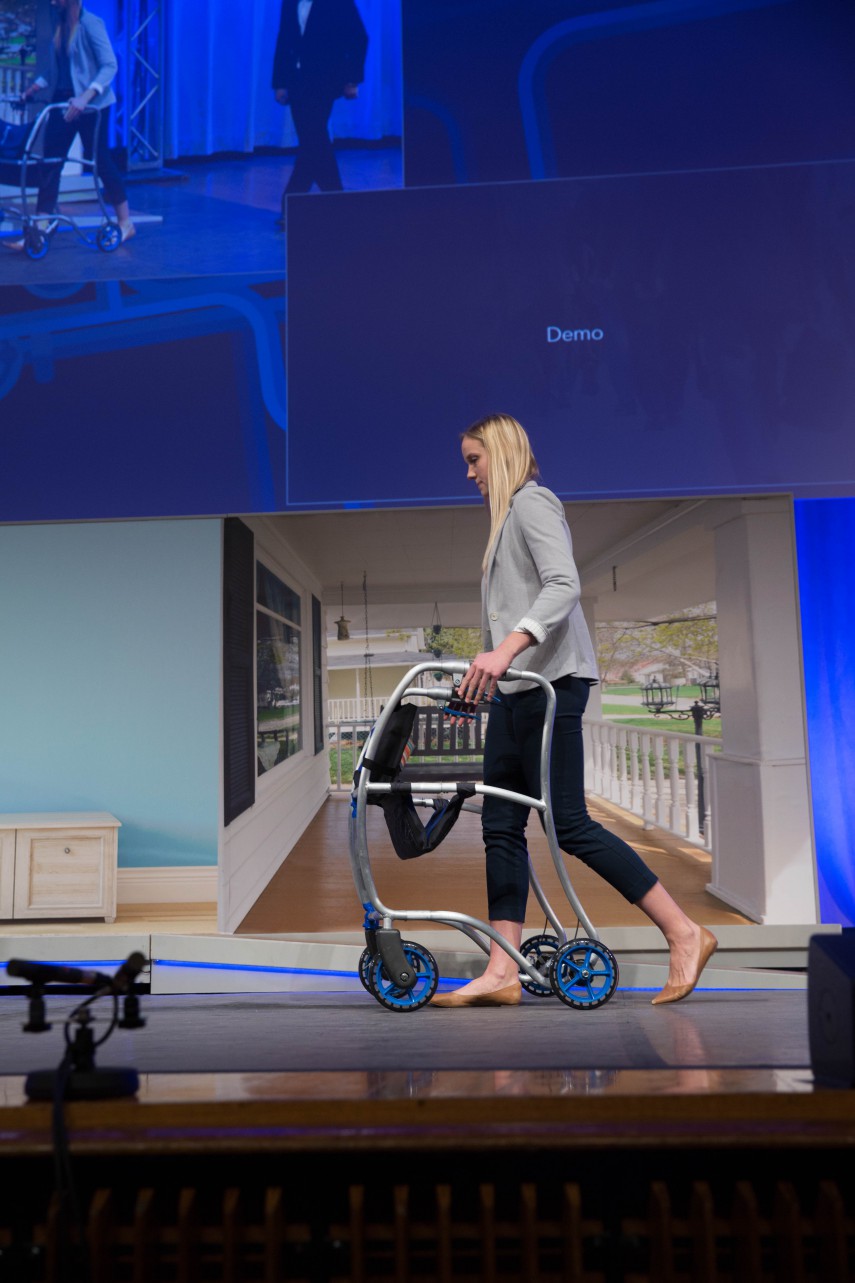 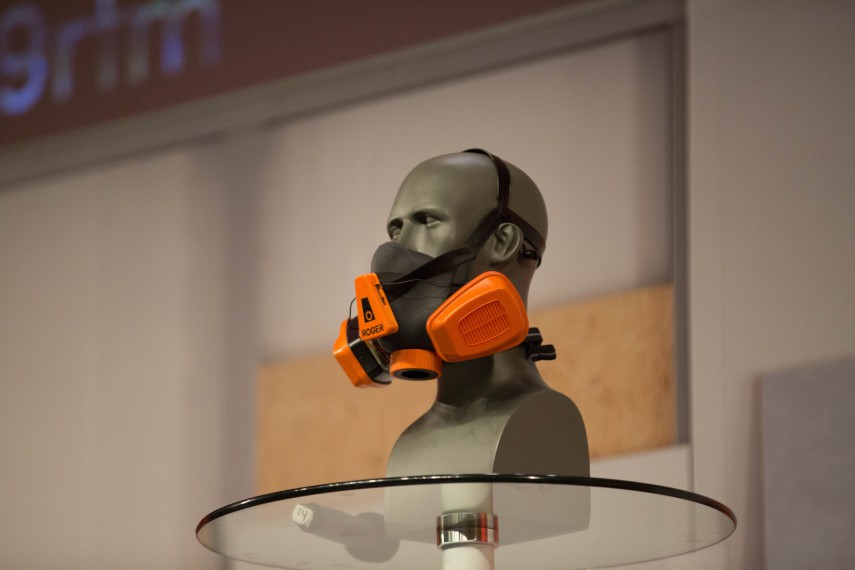 Have you ever been on a paint job with your buddy that required a respirator and you tried to tell your friend to do an extra coat but couldn’t because the respirator muffled your voice to the point of incomprehensibility? Well, that’s exactly the problem Orange Team looked to solve! Roger facilitates teaching and communication by letting you communicate through radio channels. Respirators are important for many reasons, reducing your risk to toxins being the most prominent one. But taking off your respirator to communicate compromises the protection that it gives. And Roger isn’t just useful to painters: it has uses for agriculture, masonry, and manufacturing as well. 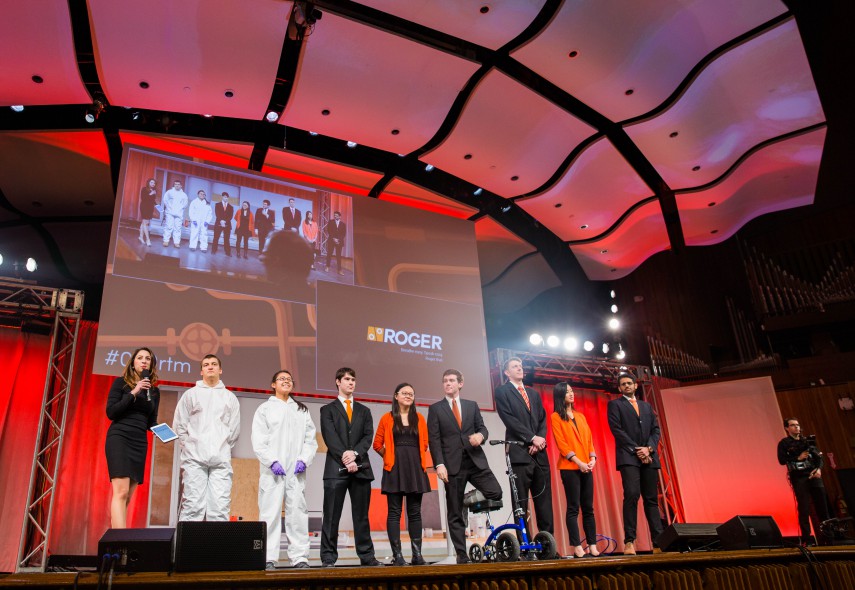 Roger has a built-in microphone and earbuds so that you can communicate easily while keeping your hands occupied on the job. I was really impressed with Roger: the electronics, the design, and the machinery that went into the final product was really in-depth. 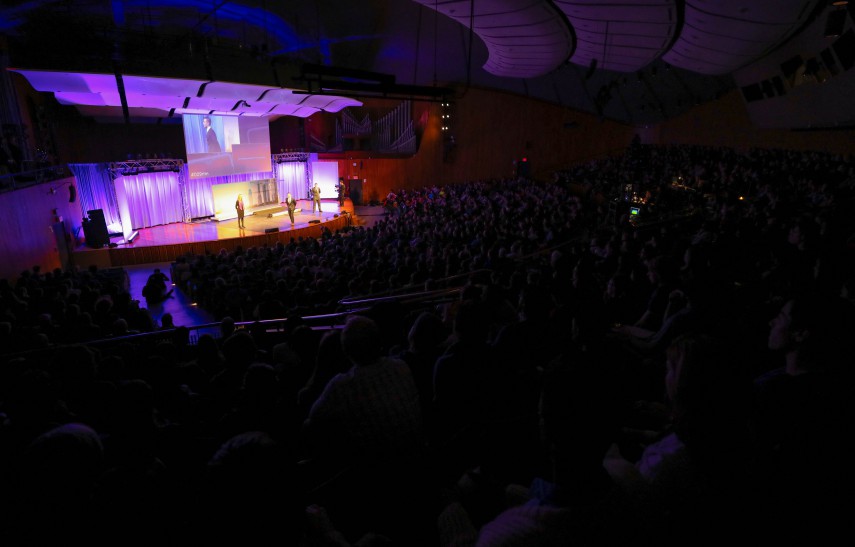 If you’re a power wheelchair user, getting around in the rain safely and protecting your wheelchair from short-circuiting can be a tricky matter. If you can’t hold an umbrella, you may simply be out of luck. That’s why Purple Team developed Dryve, an automated canopy that serves the same function as an umbrella. It’s an attachment to a wheelchair that can fully deploy in under ten seconds. Burt, a power wheelchair user Purple Team worked with closely, actually came out on stage to demonstrate how Dryve works, which was really cool. 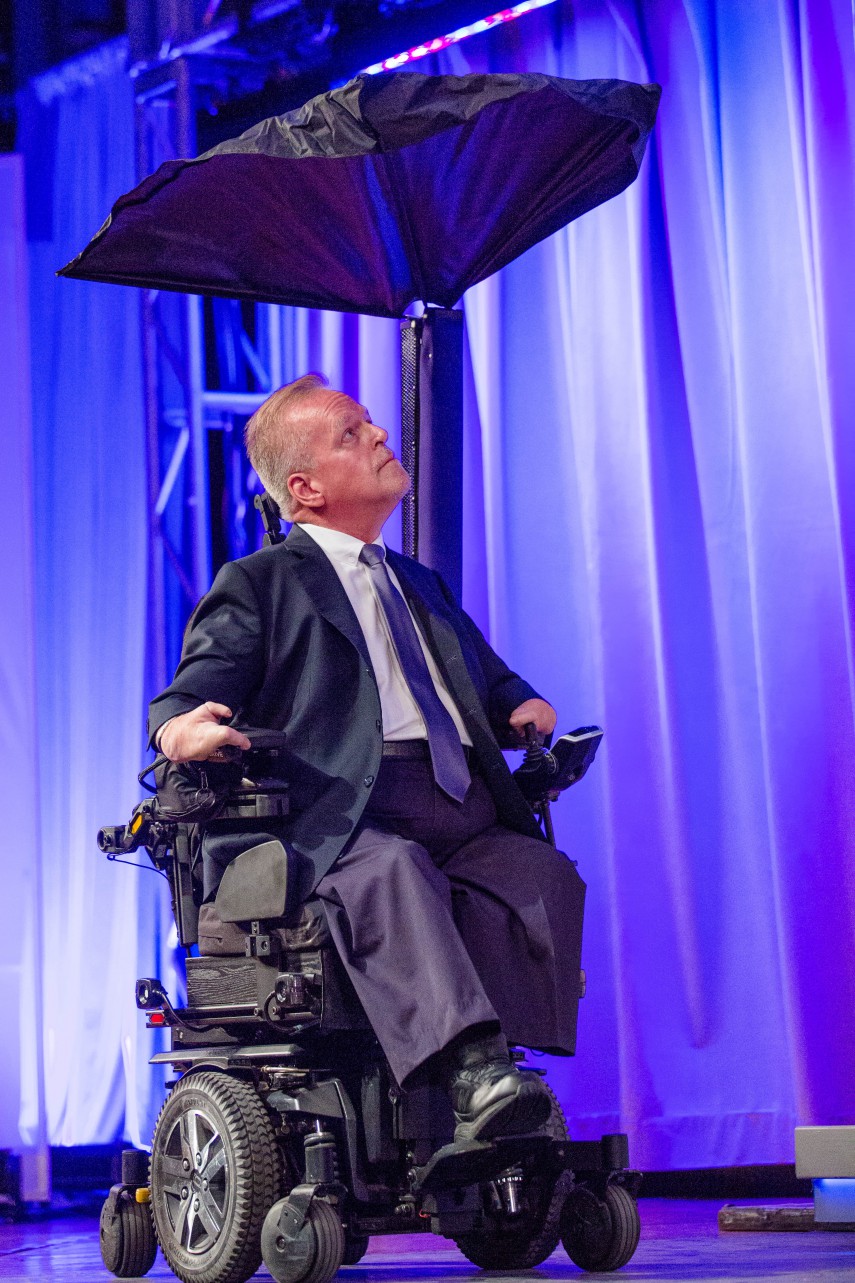 How does Dryve work? It’s made of three components: the canopy, the enclosure, and the actuator. The canopy is made of a coated nylon that’s waterproof-resistant. It sits on three fiberglass poles which are attached to hinges on a moving platform. The enclosure for the canopy sits close to the wheelchair so that the user can maintain a small turn radius. Dryve was designed to be used with many different power wheelchair models thanks to a flexible mounting system. 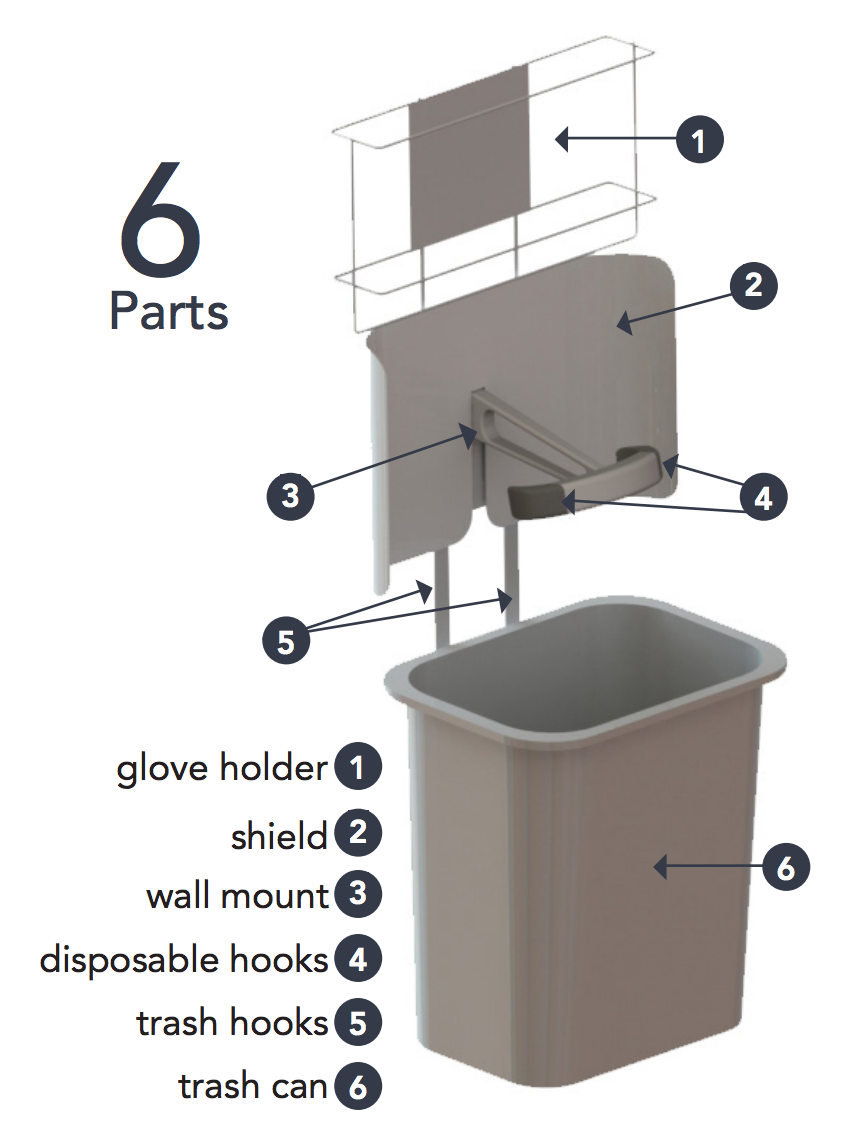 In a laboratory setting, there are many chemicals that have the potential to cause harm if they make contact with the skin. The National Institute of Health (NIH) found in a study that 52% of participants that regularly use disposable gloves exposed themselves to contamination through incorrect removal. And even when the proper training was given, 1 in 5 participants still put themselves at risk. For Green Team, the solution was Glovestop, an easy-to-use and non-intrustive fixture for the laboratory setting where people can dispose of contaminated gloves safely. 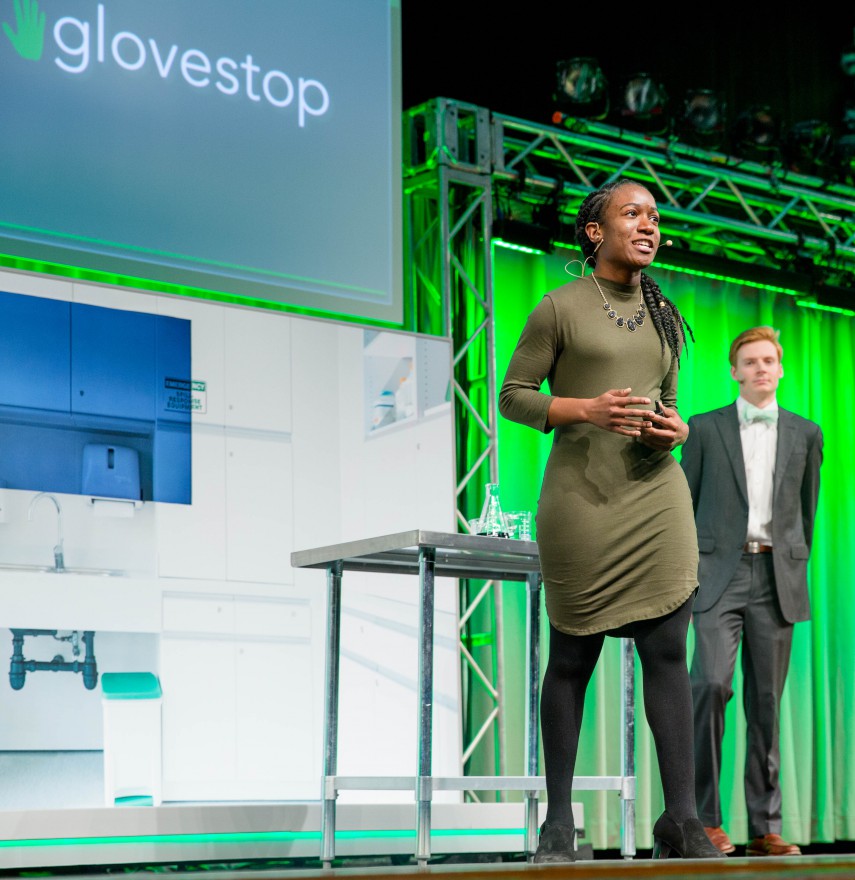 Glovestop’s main feature is its rubber caps on both ends that provide an optimal coefficient of friction such that users can easily remove their gloves without ripping them. Glovestop is a heavily user-driven design, which means that there was extensive interviewing and reviews done by Green Team to fully understand what researchers that worked in the lab needed. Glovestop is ideal for its simplicity and pure mechanical design which uses no energy consnumption. 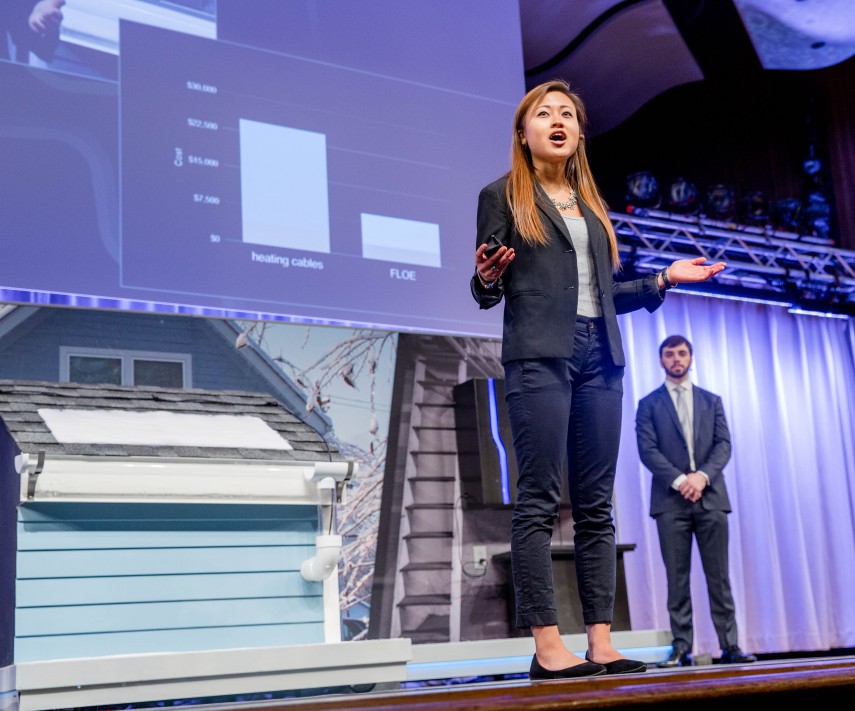 If you’re not from the Northeast or any typically cold area of the world (or even if you are from a cold place like me), you may be wondering what an ice dam is. An ice dam occurs when melted snow is refrozen near the edge of the roof of a house, causing a blockage that prevents any additional melted snow from draining normally. This causes a pool of water that eventually leaks into the home, causing damage. As a solution, Silver Team created Floe, not as a product to get rid of ice dams, but to create channels through the ice dams so that the water behind it can drain freely. 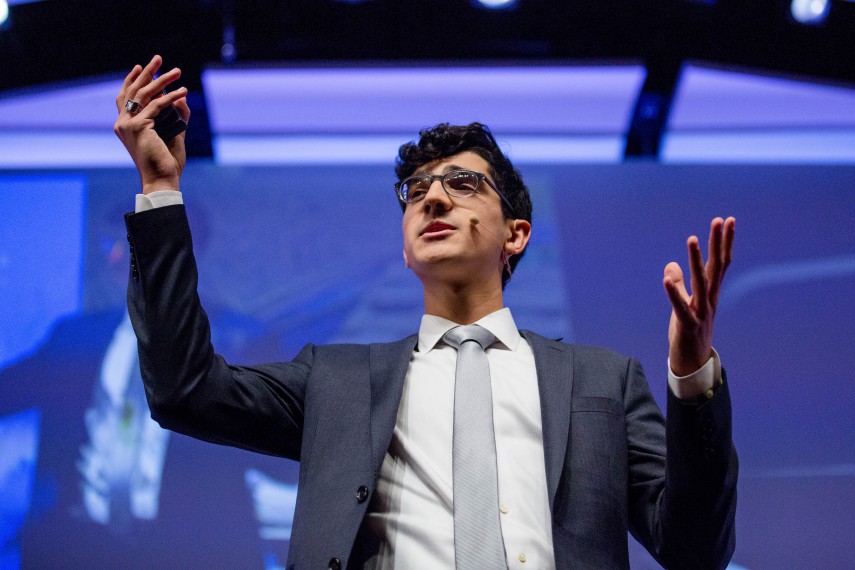 Floe has temperature and moisture sensors that automatically activate whenever the conditions for ice dams are present. An irrigation tubing system that stems from a utility room brings de-icing fluid to the roof, creating channels through the ice dams strategically spaced three feet apart. In case there is an electrical failure during inclement weather, causing the sensors to not function, homeowners can turn Floe on manually. There’s even an Android app for Floe so that users can know when Floe is dispensing fluid and when fluid is running low. 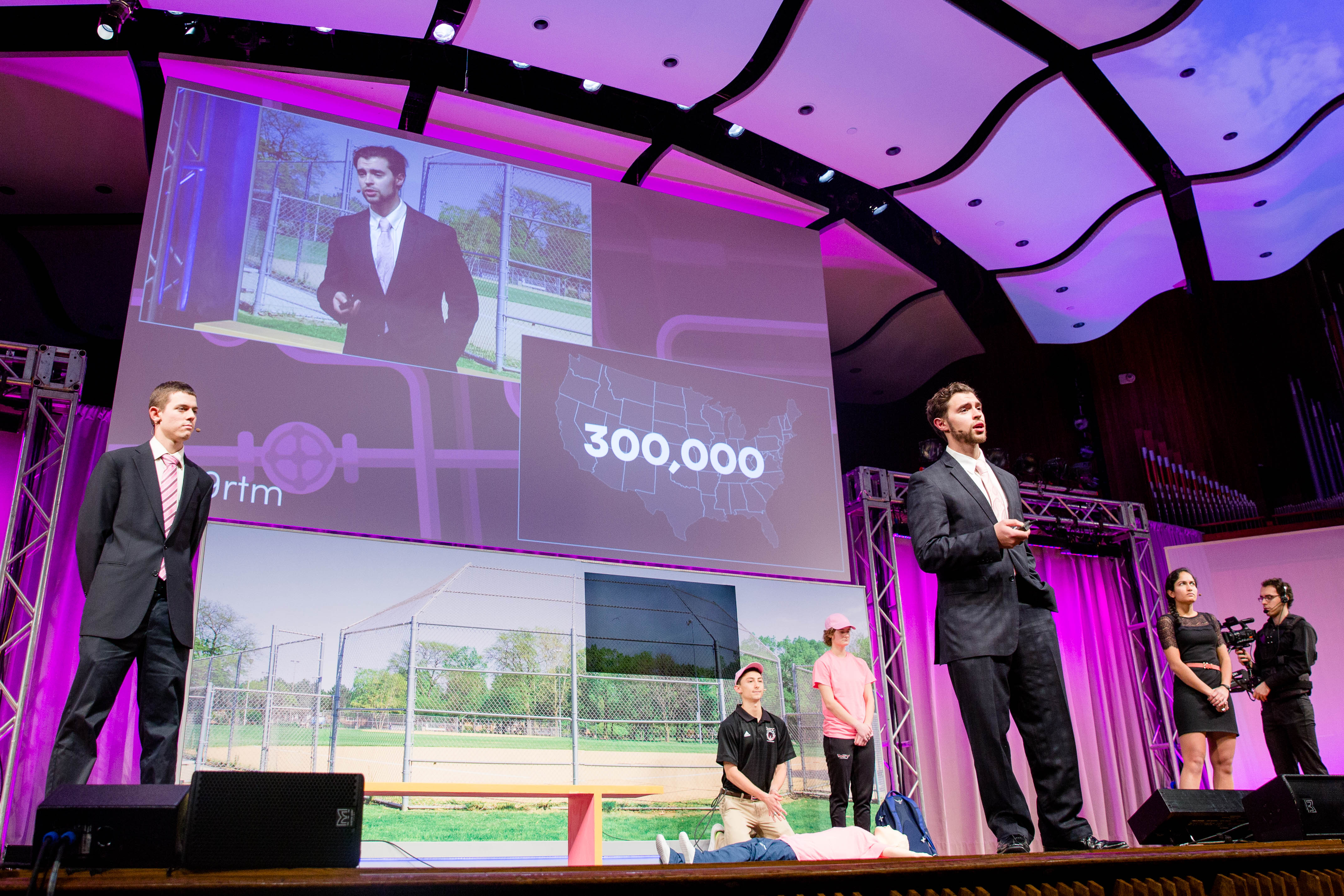 When someone goes into cardiac arrest, time is your worst enemy. Revive is an incredible way to minimize the time between the beginning of a cardiac arrest and the AED shock that could save a person’s life. Revive is a portable AED that’s surprisingly small, which means you can carry it around anywhere, from the glovebox of a car to a first-aid kit at a sport event. As soon as a user plugs Revive into their phone, instructions come from the phone on how to operate the AED, call 911, deliver CPR, et cetera. Additionally, Revive uses two proportional boost converters to take the 5V output of a typical smartphone to a whopping 1400V charge in less than two minutes!

Revive may look small, but it’s an extremely powerful product that still kind of blows my mind. 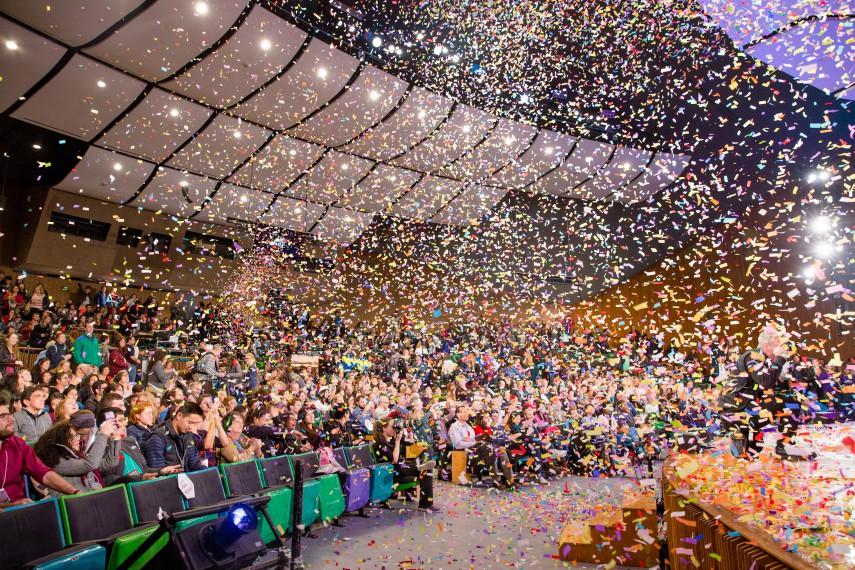 And that’s it! Eight products from eight teams, an awesome event, and a semester complete. I can’t wait to see what next year’s class will make. :)