I woke up on Sunday morning, a translucent silence filling the room. Dawn-ish grey light hung on the ceiling tiles, and I laid in bed and watched for a while.

Some mornings also begin with ringing alarm clocks, I thought, which seemed hilarious because this was not one of those mornings. This was a curious morning indeed. I thought about the word indeed for a while too, and then I leisurely reached for my cell phone and it was 8:11 AM and I had set my alarm for 7:15 because the MIT concert band was leaving for a gig in Harvard, MA in EXACTLY FOUR MINUTES FROM NOW.

Flustered details aside, I skidded onto main campus just as the last car was pulling away, crammed my instruments (flute + piccolo) below the seat in front of me just the way I was taught by countless airline stewardesses, and went back to sleep. In my dreams, I congratulated myself on my good fortune and promised to blog about this.

[A bit of background info: The MIT Concert Band is a student organization, as opposed to a performance group that students can join for credit (such as the MIT Symphony Orchestra). We rehearse twice a week and accept people at any time, which is nice because a huge percentage of MIT students were active musicians in high school. No auditions are required. Much fun and friendliness are enjoyed in liberal amounts.]

It just so happened that we were playing in the verdant lap of mother nature today, surrounded by fresh green grass and sprightly trees and vendors selling highly processed foods at the Harvard Fall Festival (not in any way related to Hahvahd University). Thanks to a raging downpour, the audience bordered on nonexistent. Nonetheless, the guy cooking hot dogs 10 meters away will tell you that the MIT concert band sounded great and undeniably better than Harvard University’s band, which was so intimidated that it didn’t show up at all. Class of ’13, remember this when you’re deciding between colleges next March.

It was hard to leave the festival. I mean this literally, as this is what happened to the car wheels: 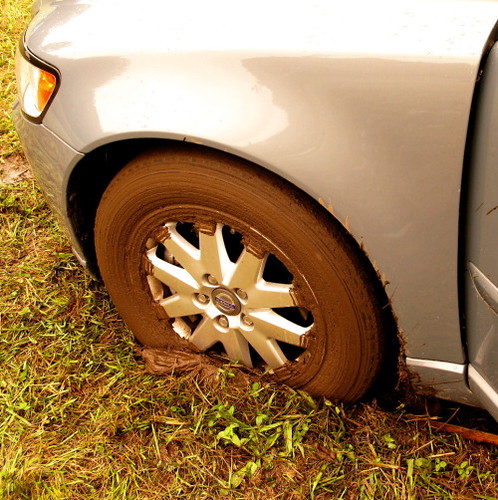 Fortunately, a cheery man pulled up in a red tractor, hooked a cable onto the back of our car, and calmly unstuck our vehicle from the Harvard fair grounds. 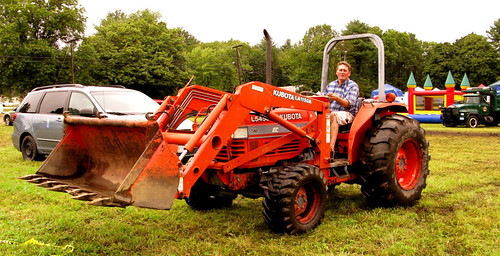 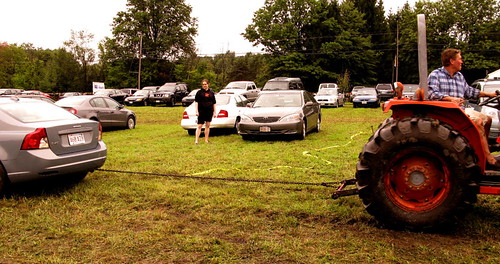 I just realized that this picture looks exactly like a problem in every introductory mechanics textbook known to studentkind. Rachel ’10 (pictured above), who was no doubt trying to calculate the tension in the cable, deserves a special mention here: she plays flute/piccolo in practically every student musical organization on campus, in addition to carrying out the standard functions programmed into MIT students. Like math and stuff.

Of course, we got stuck again as soon as we were detractored. However, I think it’s time to move on to the next segment of this story . . .

As many of you no doubt have heard, one of MIT’s favorite phrases is “Work hard, play hard.” A little-known variation is, “Get your car stuck in mud, go apple picking!” Let’s ignore the fact that this makes no sense and instead consider that:

So I’m sure you’ve all seen the following depiction of Isaac Newton reposing beneath an apple tree, which flaunts one of the most egregious lies in all of scientific history.

You guessed it, I’m referring to the fact that this picture would lead you to think that apple picking involves scaling tree trunks as great in heighth and breadth as, well, Isaac Newton. In reality, apple trees look a lot more like Napoleon, but skinnier and with a lot of branches and leaves. 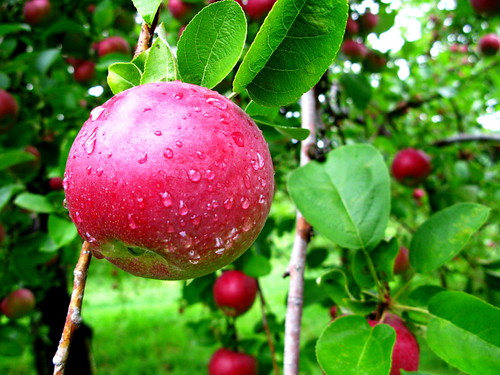 Phil, the eponymous owner of Phil’s Orchards, was well-acquainted with the MIT Concert Band, which clearly affirms that MIT’s concert band is famous. After all, Phil is practically the best cider maker in all of New England, according to the sign outside his gate. 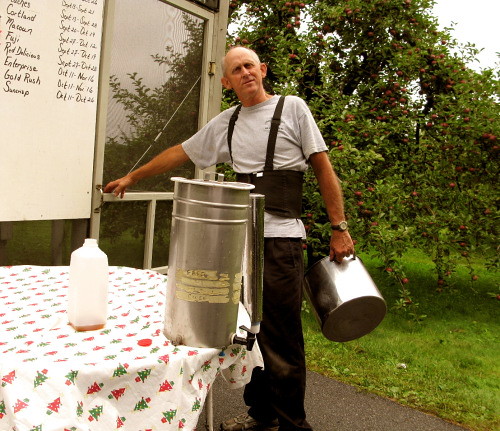 And so I proceeded to stuff half a peck of apples into a plastic bag and another four dozen pecks or so down my esophagus. Rainwater, while not comparable to McCormickwater, tastes pretty good on apples. 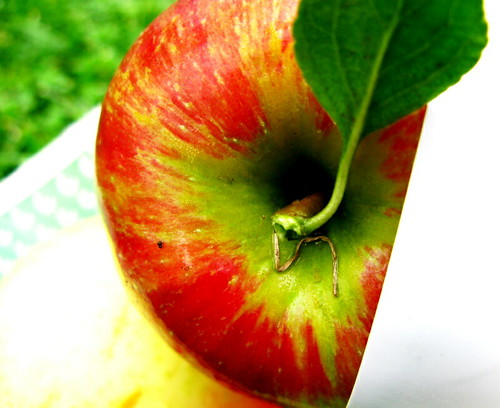 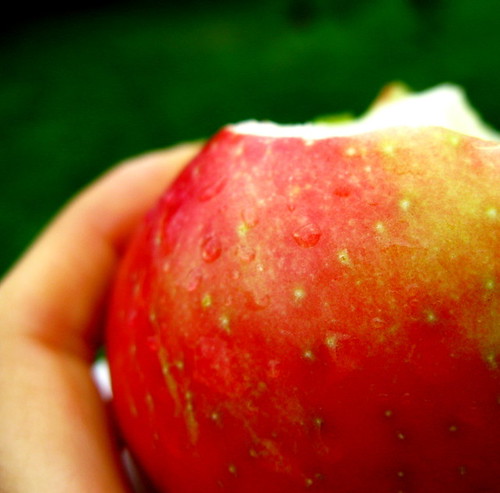 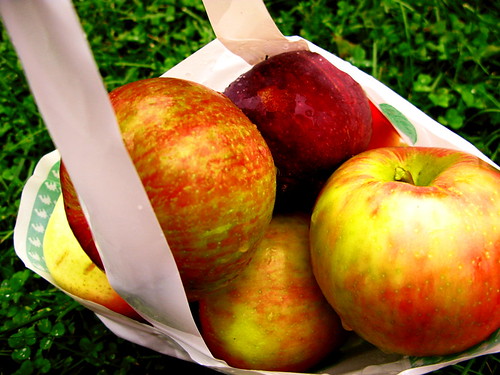 Although Random Hall is a stone’s throw away from two (2) well-stocked grocery stores, the sight of living, photosynthesizing peach trees still fills me with bubbles of frucose-anticipating joy. So unless you’re on the cross-country team, Phil’s peaches are well worth the potential ankle injuries involved in descending this mud-slicked slope. 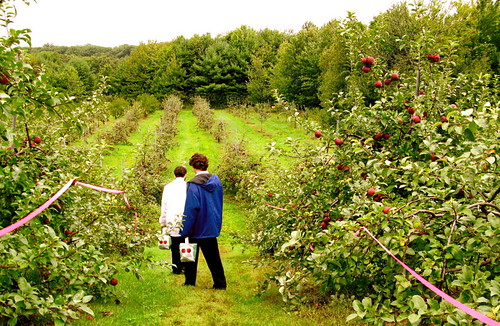 On our way out, we were distracted for a full 20 minutes by Phil’s cider-making process, in which mushed apples were juiced under a huge amount of pressure. This, dear reader, is why I love the freshman first semester pass/no record system at MIT: the freedom to pursue happiness in the form of watching cider drip down a cider-making thing. 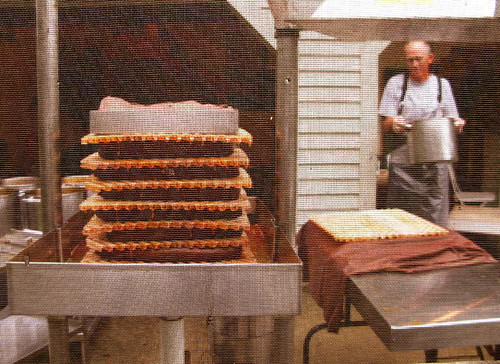 Also, a lady stopped by while walking her llama. 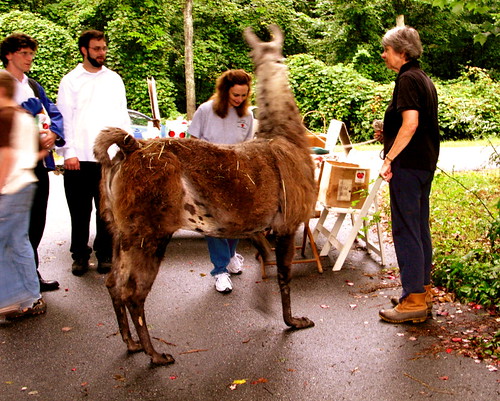 Here, the llama anoints the head of an apple-picking bystander. 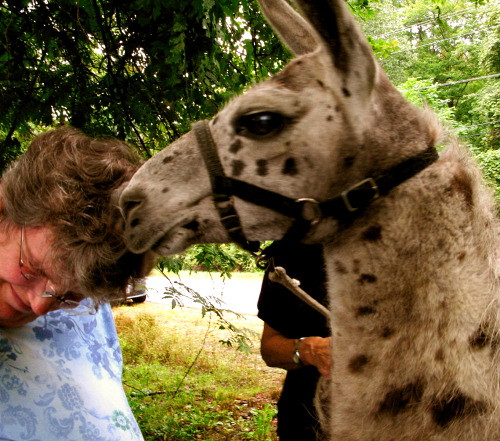 It was a fruitful day. 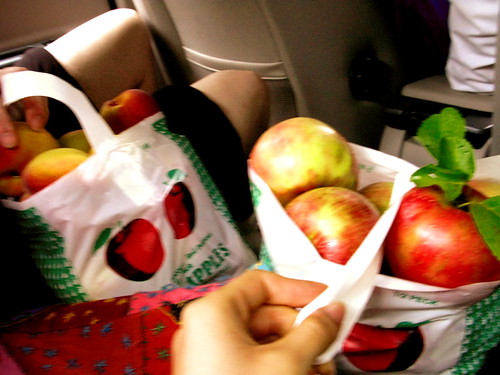 I got back to Random Hall at around 15:00, consumed cereal (MIT’s favorite all-purpose food), and napped for two hours. Ordinarily, my Sunday routine involves foraging for free food events during the early evening, but I decided to exercise my culinary prowess tonight by boiling eight frozen dumplings and adding the leftover water to a miso soup paste with dehydrated vegetables. Dinner turned out scrumptiously, and I was rather delighted with my self-sufficiency until I realized that every single ingredient was either taken from Random’s community food supply (water, soy sauce) or claimed from anonymous previous residents who bought food that they never ate (seaweed, tamarind chutney, dumplings, miso paste and toppings).

Emeril I am not, but I did manage to complete an entire Mastering Physics set while simultaneously boiling water (like, four whole cups of it).

And then I remembered that today was the Chinese Moon Festival. I like the moon as much as anyone else, so Katelyn ’12 and I hurried ourselves over to a snacks-and-Shaolin-Soccer-filled celebration hosted by the Association of Taiwanese Students at MIT.

ATS seemed to be more active on campus than any of the other Asian cultural student organizations, so I shelled out a whopping 5 bucks for a membership. Taiwanese nationality is by no means required to join ATS, by the way. All you need is an appetite for blindingly colorful and/or geometrically-regular food. 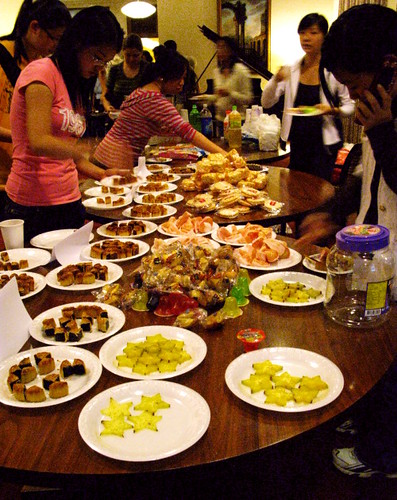 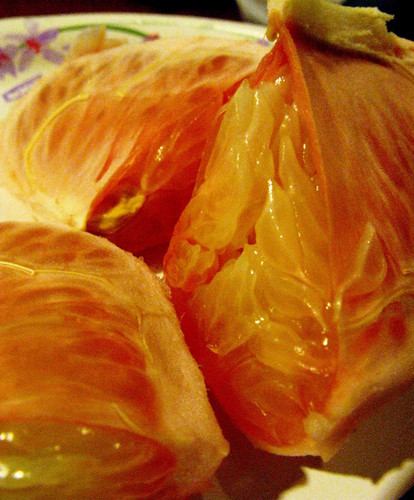 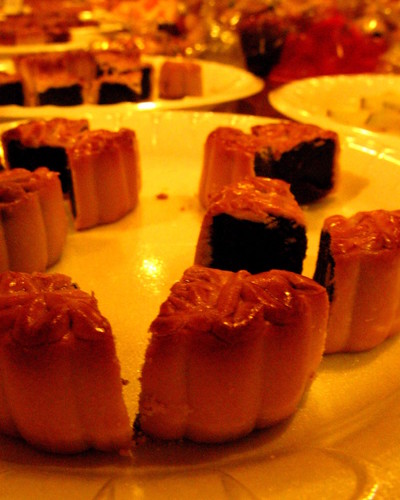 Speaking of which, ATS deserves a gold star for its dedication to dispensing free food. Their last meeting had a rapturous array of homemade dim sum dishes, which more than compensated for the karaoke in the background. I say this not lightly.

Events are open to everyone at MIT, so there’s a lot of potential for mingling. Most student organizations at MIT enthusiastically welcome newcomers of all backgrounds and expend a lot of energy to attract the volatile attentions of freshmen. Essentially, this translates into more free giveaways than can fit in a single dorm-provided desk, a deluge of snacks at the Activities Fair and similar events, and an overwhelming display of posters in the Infinite Corridor. 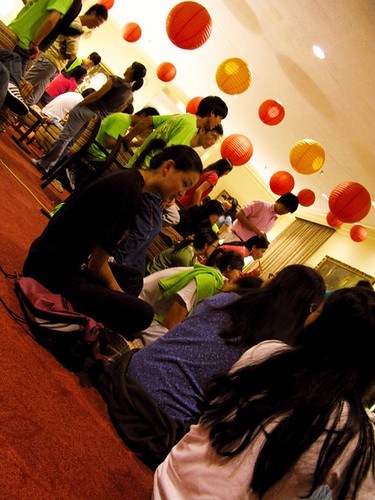 So by this point, all the potential freshmen reading this are probably worried that nobody at MIT ever studies. Fear not! Katelyn and I left the party early and trudged over to Hayden Library, where we studied and did problem sets until 11:30 PM. My eyes felt partially liquefied after 3.5 hours of reading, so I stood around and stared into the empty depths of the Infinite Corridor while some unseen force rotated the walls. It didn’t show up on film though, so you’ll have to take my word. 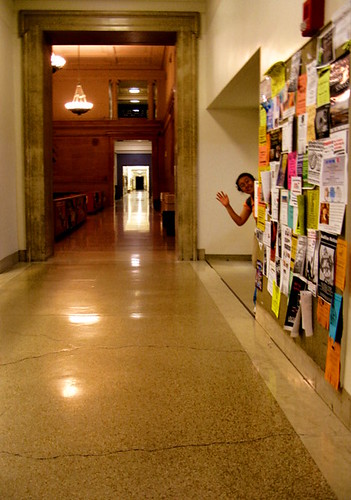 I got home and blogged and slept. 3 AM and I are becoming close friends.

Moral of the story: Get your recommended daily servings of fruit and student organizations.

33 responses to “A Day in the Life: Weekend Edition”