I might as well tell you straight away that this story ends with Lady Gaga defacing my MIT ID with a permanent marker.

Be warned: the newspapers will spin you a cybertastically-juiceless tale of a bleach-haired megastar appearing at the MIT museum yesterday with almost as much advance notice as a truckload of detonated TNT, of a Polaroid press conference culminating in the unveiling of a 20”x24” Polaroid portrait of Polaroid’s Creative Director (whose name begins with “L,” I believe, and ends with “ady Gaga”) photographed on the top floor of the MIT museum using a Polaroid camera that more-than-kind-of looks like a droid from The Clone Wars, of Polaroid donating the portrait to MIT along with a 9000-piece collection of Polaroid artifacts, of Polaroid’s future plans to publicize its digital images and digitize its public image. (Grapevines for the curious: Polaroid will “soon” release a fully-digital camera with the capability to print instant Polaroids just like Grandma used to do for her scrapbook. I still submit that the slogan of the company’s reincarnation should be, “Polaroid: Because Your Embarrassment Should be Accessible to Everyone.”) These details I will skip, except to note that one of the proposed designs for the new digital-camera-plus-printer combo looks exactly like what Amish people probably think army tanks look like.

All that aside, I woke up yesterday morning on a couch, faced* with the hard, hard realization that someone had stolen my pillow and replaced it with a laptop. Except the situation was far worse than you’d expect, because the someone was myself and I had already paid for my laptop and filled it with useless PDFs about why photons interact gravitationally with each other. Eventually, I found myself a new neck and decided to consume a mango from the MIT Farmer’s Market for breakfast, although in reality the mango was probably imported from Mexico, an irony that reminded me of how Lady Gaga’s newest music video plucks out a similar dissonance between the theme of places that aren’t Mexico and the theme of places that are Mexico. I just reread the previous sentence, and it seems possible that I don’t understand what the word “theme” means.

*I should have written, “the back of my head faced with . . . ” in order to evoke the accurate positional relationship of my head to the lack-of-pillow, but this sounded too anatomically confusing.

The takeaway message here is that I finished the mango, checked my email, and discovered at 9:18 AM that I had a press ticket to a Polaroid press conference at the MIT Museum at 11:30 AM. The weather forecast registered sunny with a 50% chance of celebrity sighting.

I showed up. This happened: 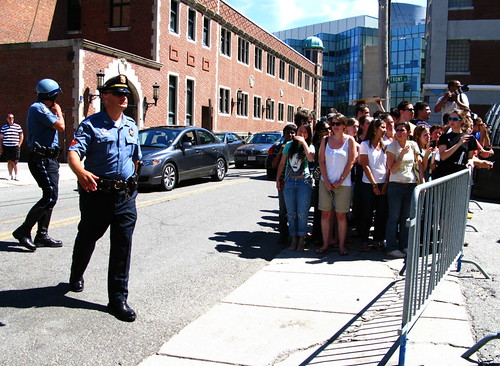 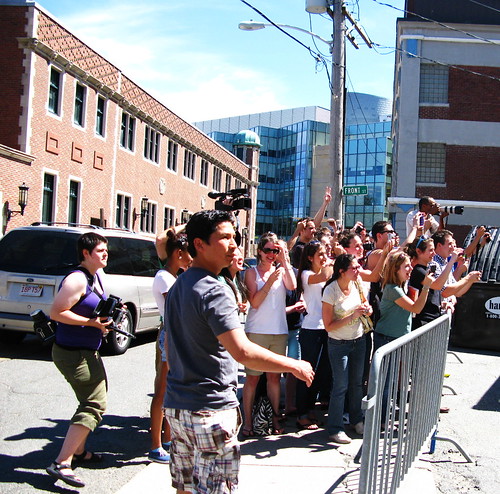 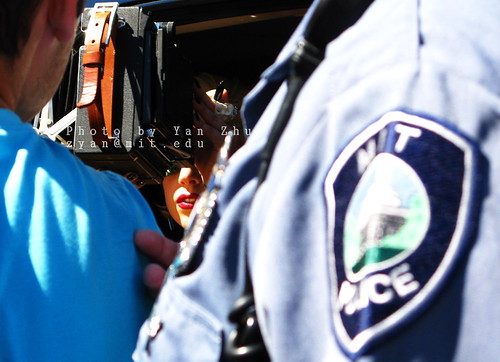 Eventually, I crossed the 7-foot-radius line and had an epiphany that no person in the presence of an international celebrity has ever had before. It was this: I would ask Lady Gaga to sign something that belonged to me. Fortunately, she was holding a Sharpie marker. The moment hung ripe in the summer air. 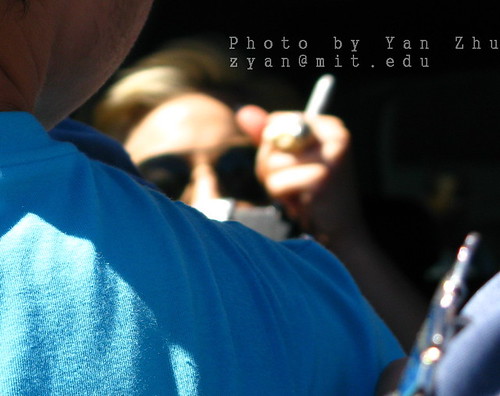 In my right pocket was my cell phone. The temptation to ask her to sign it was compelling up until I remembered the scene from Telephone where she walks into a Tarantino film and poisons the entire cast because someone wouldn’t stop calling her on the phone. Scratch that. In my left pocket was a wallet with $15, a grocery discount card, a debit card, a subway pass with $1.70 remaining, and my MIT ID. And then I thought, “Only two more years, right?” and pulled out my ID.

Lady Gaga looked at it, paused for a fraction of a second, and said, “Are you sure this is legal?” 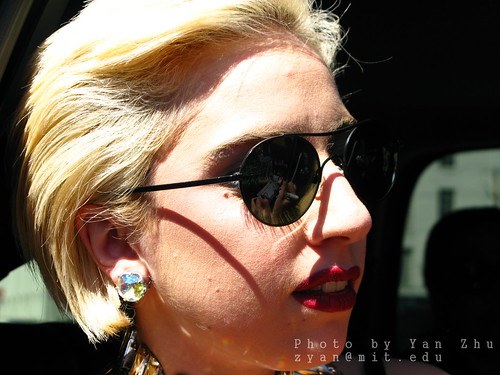 (If you look closely at her sunglasses in the picture above, you can see the ectoplasmic reflection of her hand autographing my ID.)

Honestly, it’s probably not. But on the bright side, a new ID card costs exactly $15. 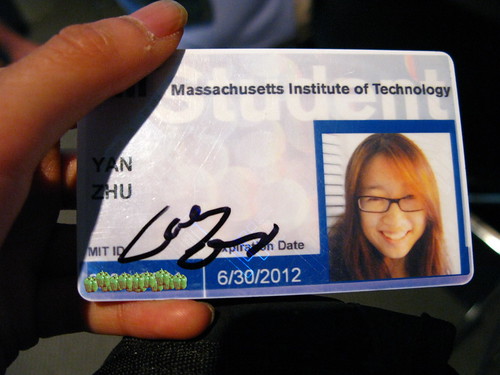 (In case you’re curious or vegan, I blocked out my MIT ID number with stamps of green bell peppers in GIMP.)

27 responses to “This Entry is About”