too fast, too furious

Like I assured you in the last entry, I am still alive. Exhausted (like always), but still hanging in there. It’s good to see all of you :)

So what’s up. It’s senior year. This is actually a pretty traumatizing experience. A few weeks ago, I realized at Activities Midway –

(by the way, check out Dancetroupe’s performance at the Midway this year – MIT students can dance too!)

– that this is going to be my LAST Orientation Activities Midway (I had manned the Model UN booth for the last three years running >____>). And this feeling has been emerging a lot – this is my LAST fall first day of classes – this is my LAST fall first day of lecture – this is my LAST time pretending to be a froshie and going to REX events (you have no idea how easily this works for me – I successfully merged into a band of ’14s at a party and remained undetected for the whole time, much to my amusement (yay for looking young? haha – tangent: i still get id’ed every time when i buy tylenol at cvs. you have to be 18 to do so. guess how young i look then =_____=))

But anywhoo, back to the actual subject.

In many ways, I still have a hard time rationalizing that I am a senior. After this semester, I will be one class away from my BS in Biology, and two classes away from my BS in History. In other words, three classes removed from being out of this place! AHHHHH what has happened to me?! lol 8.01 is still hard for me! (true story, as I try to help froshies with their psets) i don’t think i’m done with mit yet! >_____<

Anyways, this is my class schedule this semester, in case you are curious:

One of my last remaining biology requirements. The only thing I have to say about thermo is that you don’t understand it, or you…..don’t understand it. :) I mean, I don’t think I’m bad at it but I am still having problems attempting to visualize things like U, q, w, H, and S. Meh, I get by. Let’s see what I think about the Carnot Cycle rears its ugly head (that was one topic in one of my MCAT prep books that I never understood fully).

Also known as Project Lab, this is the Biology Major’s rite of passage at MIT. It is unofficially and colloquially known as the class at MIT with the most number of units, but it’s the way it is because when you sign up for Project Lab, you are basically signing your life this semester away to the Gods of Experimental Failure, the Gods of Insomnia and Frustration, and the Gods of Controls That Don’t Work The Way They Are Supposed To. (a often circulated joke in the biology labs is that the reason it takes an extra 1-2 years to get a bio phd compared to chemistry and physics phds is that you have to allow that extra time for unexplained experimental screwups, trial and error, and time for your experimental animals to grow)

I’m starting to get a taste of it, as I spent over 30 hours in lab my very first week after starting Project Lab. I’m characterizing this completely novel gene in C. elegans (which I have been doing since last year, on-and-off, actually), and this semester I’m trying to make a coordinated effort to finish off the project. If all goes well, I’ll do a mini-“poster presentation” here with you guys! :)

There are two introductory survey classes in the History Department that are very popular with freshmen. One is How to Stage a Revolution, which had been cited in some news articles as an example of innovative teaching at MIT. The other is Empire, which was just started last year by a trio of amazing professors, Profs. Bahr, Broadhead, and Goldberg, all specialists in Ancient or Medieval History (before 1700).

Now, I’m really a more contemporary historian (I have not taken any history class at MIT that goes back later than the American Revolution), so taking this class has been interesting, because one of the things you learn very quickly about Ancient History is the scarcity of first-hand sources, whereas in my thesis research and whatnot I’m accustomed to being inundated with accounts and sources. In fact, I am always asking myself how I can pare down my resources to make my paper more manageable, rather than to extract a 5-page essay out of a single Roman coin, like scholars of Ancient History do.

But at the end of the day though, the professors are awesome. Like I was relating to Dora ’11 (the other history major in my class!) earlier, Professor Broadhead simply has to open his mouth, and the next 1.5 hours will disappear before your eyes. :)

Mere words will not suffice to describe how much I love the humanities at MIT. I hope to do a lot more of drawing you into this hidden gem of MIT in this year (and my last year to ramble to you) to come!

Yeah, here it is – the crown jewel of any humanities major – THE THESIS. But it’s all good! I think I am researching a very interesting topic, and so I am excited to be writing this paper.

During the Second World War, multitudes of Americans with Japanese ancestry on the Pacific coast were hoarded up into cattle trains and forcibly removed to internment camps located in the barren lands of the Pacific West. Their only crime? “Looking Japanese.” In the years that these camps were in operation, a unique culture developed and flourished within these camps, as the internees learned to make a living for themselves and make light of the situation that they are in. Many memoirs from this period are solemn and bleak, but tinged with heartwarming stories of perseverance and gaman (roughly translates to ‘resilience’) in this trying period. My subject of research is to investigate the social order that emerged in these camps, most notably the educational programs and analyzing how these programs were different (or similar) in bringing the camp residents together when compared to other organized activities like sports (primarily baseball) or religion.

The most interesting part of this project is that I am culling my sources from the camp newspapers that were published in this period (and for the most part, almost completely preserved in online archives – yay!). These newspapers were usually announcement bulletins published by the internees, but also served as a dual purpose as entertainment and a source of information as the internment period dragged on. By the end of the internment period in 1945, many of these newspapers were published several times a week, even resembling actual newspapers. It’s fascinating to get a glimpse into the past through these yellowed tabloids, and the amount of information they yield about camp life is actually quite amazing (are you curious about what was served at the dining hall every night?). What’s more, many of these newspapers contain a “Japanese section,” written completely in Japanese for the benefit of the issei (first generation Japanese immigrants), who cannot read English. I am comfortable deciphering Japanese text, so reading through these sections had also proved to valuable in unlocking an additional level of understanding of camp life, previously unstudied by historians yet.

Basically, this is also really novel research into the social order of the internment camps from this period, so yay for new discoveries! I’m actually quite excited about both my biology and history projects this year.

And so finally, the other “class” I’m taking is probably:

I applied to medical schools this summer, and now I’m starting to hear back from a bunch. With the exception of just one weekend, I will actually be gone every Friday in October for interviews. Although it is definitely nice to have an excuse to travel the country and hopefully go to many places where I have never been to, it would probably be an exhausting experience as well. (and how the heck am I supposed to find time to work on my bio and history research…>_____>)

At the end of the day, though, I just hope to try my best (I’m actually kind of nervous, for the first one that’s coming up in three weeks!), and have fun finding my new home for the next 4 years :)

Anyways, that is a lot of talking from me. Here are some pics from my life circa the last two weeks :) 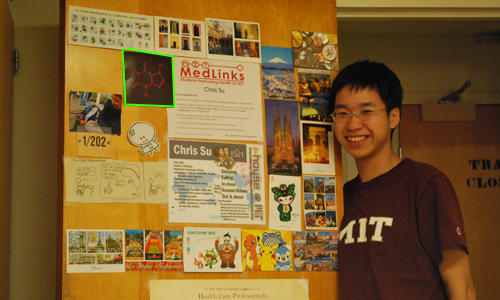 This is my door this year at MIT! I love postcards, so I put them up when people write me :) A few of you will recognize the card that’s boxed in light green, which we sign diligently for you guys every year! :P 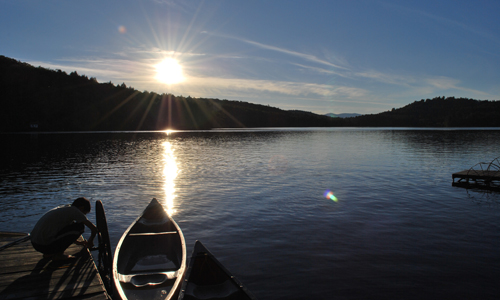 iHouse went to Bryant Pond, Maine two weeks ago for our Fall Retreat, and the lake was gorgeous :) 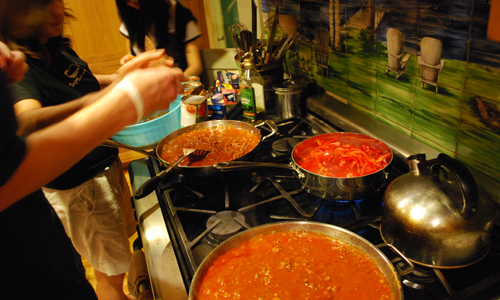 Marisa ’13, our master cook, directs the dorm to prepare the lasagna for the dinner the second day of the retreat :P 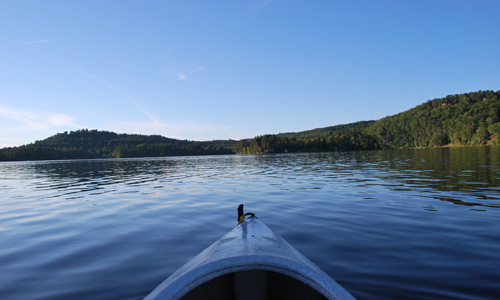 I took my camera out to the pond for more kayaking – I had to hide the camera underneath my waterproof jacket while rowing so it doesn’t get wet :P 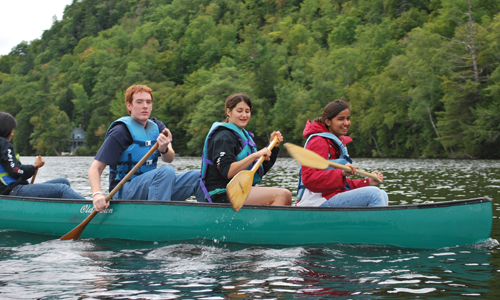 And then I got a picture of a few characters on the water ;) 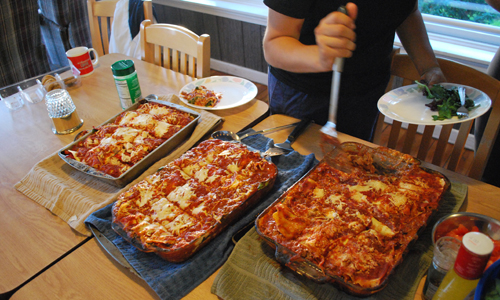 And then the lasagna was ready! yayyy it was delicious :) thanks Marisa! 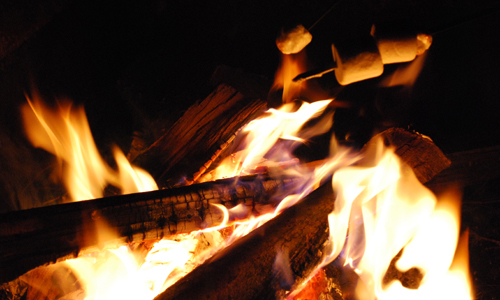 And OF COURSE there were s’mores at night – but a part of my lingering fobbiness is that I still can’t really appreciate gooey marshmallows, so I prefer to roast them for other people than to consume them myself xP 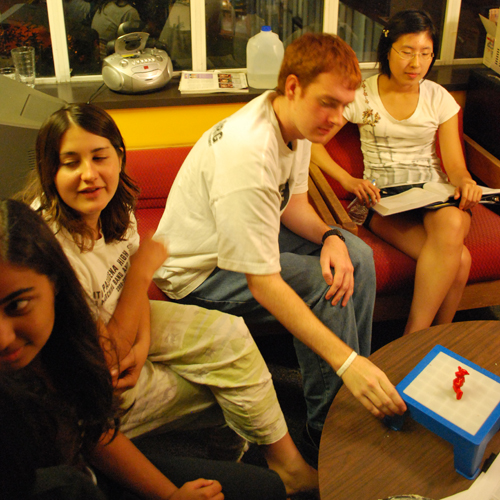 And then we come to iHouse, and these silly people are in love with a game called “Don’t Break The Ice”… 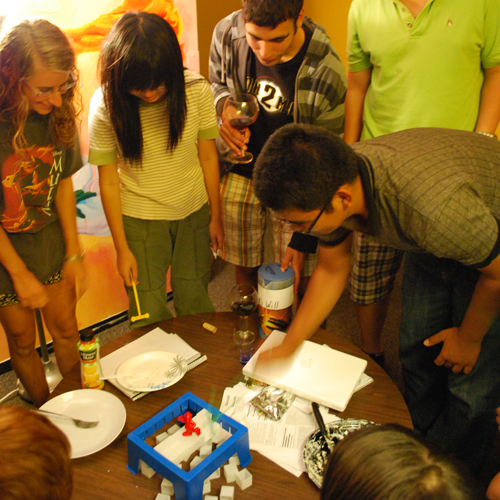 They treat this like it’s the “Don’t Break The Ice” world championships, yo :P 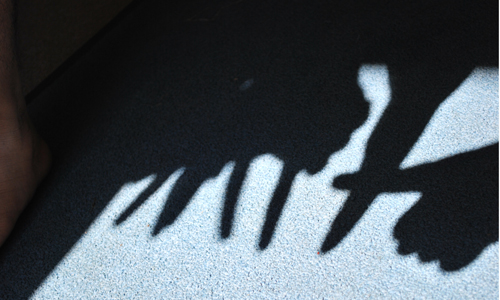 some.plans.for.blogging
1. 10 best nooks and crannies to study on campus
2. why humanities at mit owns. and the new humanities requirement.
3. why i spent 40 hours in lab this week and oddly liked it
4. long overdue blog (since freshman year!) on mit libraries
5. on mit and late nights
6. campus food blog (several entries)
7. how to study at mit (aka. suggestions i give but never follow myself)
8. things i wish i knew in high school about college
9. obligatory senior ramblings…(aka. i want to take advantage of this blog as much as possible before i graduate! :P)

6 responses to “A Preview of Things to Come”