A slightly snarkier guide to visitors by Mollie B. '06

How to not be the kind of MIT visitor who drives me up the wall.

Since it’s summer tour season and my path to work keeps getting interrupted by herdlike groups of tourists each morning, I thought it would be a nice time to talk about MIT’s campus organization. My goal is to teach you enough of the basics that you don’t look like a total tourist when you visit. All in good fun, of course. :)

Step one of the “don’t look like a tourist” guide is not to stand around like a moo cow in front of 77 Mass Ave. It may be the summer, but we students have places to be and things to discover, so kindly refrain from clogging up our path!

Step two: This is our campus. 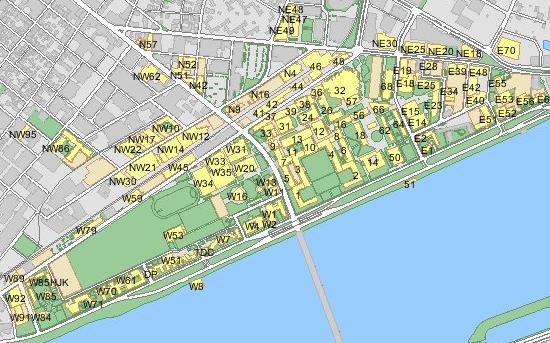 Main campus is considered to be the irregular pentagon of land bordered by Ames Street on the east, Memorial Drive on the south, Massachusetts Avenue (Mass Ave to the natives) on the west, the railroad tracks on the northwest, and Main Street on the northeast. Buildings outside this pentagon have a letter in front of their building number — the medical building is E25, the student center is W20.

Step three: Start with the Infinite.
The Infinite Corridor is the hallway which passes through several of MIT’s main academic buildings. It’s a great thing for lost visitors in the summer and frozen students in the winter — once you get to the Infinite in the winter, you very rarely have to go outside again until you need to go home. Most of the time, Boston’s weather is lovely and/or tolerable, but there are certain days in January when the connectedness of the Infinite just seems like a gift from the god of poor frozen college kids.

The main part of the Infinite runs from building 7 through buildings 3, 10, and 4 to building 8. At this point, you can take a jag left, then right, and find yourself walking through buildings 16, 56, and 66; this route isn’t really considered the Infinite, but is still a long straight line of interconnected buildings with helpful signs.

Step four: Know the natives, and don’t be a shallow jerk.
I heard a visitor say once that the people at MIT looked unhappy and busy, which struck me as a) infuriating, and b) as a ridiculous generalization. See, when you visit, there will be a lot of people roaming MIT’s campus. MIT is kind of a miniature city — there are about 4000 undergrads (only about a third to a half of whom are here for the summer, mostly doing research or interning at Boston companies), about 6000 grad students, about about 10000 faculty and staff members. Most of the people that you see in the halls aren’t undergrads, so don’t base your perceptions of MIT on the people you see in the halls — base them on the people that you meet. If you see somebody who looks like an undergrad, stop him or her and ask a few questions about MIT life. If he or she is an undergrad, I’m sure s/he’ll be happy to oblige.

Part two of not being a shallow jerk is to realize that the campus architecture will (really) have zero impact on your happiness as a student. MIT’s campus is in the middle of the city, and a lot of it is made out of concrete. This does not mean you can’t find secluded green spots where you can sit and enjoy life. You shouldn’t be picking your school based on something as silly as architecture. Program quality, yes. Personality of the student body, yes. Weather, if you’re a wuss. But campus architecture? Weird.

Step five: Putting it all together.
So when you visit, you’re going to get out of my way when I’m heading to the lab, know the numbering system, start with the Infinite Corridor, know who’s an undergrad and who’s a bitter grad student, and take in the sights without being shallow.

10 responses to “A slightly snarkier guide to visitors”