neighborhoods we move into and come to love. by Mollie B. '06

What do pregnant mice, cheerleaders, and four-foot light-up tinsel giraffes have in common?

For anybody too young to have seen my name at the top of the recent entries page before, I’m Mollie. I graduated in 2006 with degrees in biology and brain and cognitive sciences, which means that I’m going to have my pi reunion this summer. (Yay!) I’m currently a third-year PhD student in developmental neurobiology at that other university in Cambridge, and I live with my charming rocket scientist husband Adam ’07 and our rabbit (who did not attend MIT) in an apartment just north of Boston.

I’m here to update you on the breathtaking life of a biology PhD student, which is breathtaking enough to divide into a very small number of categories.

Lab and other school things I do less often than lab
Since I passed my qualifying exam last January, to my great joy and relief, I’m now a PhD candidate in biological and biomedical sciences at Harvard. Functionally, this means that I’m basically done taking classes, and I’m living in the lab full-time doing research. Eventually I’ll finish the projects on which I’m working and write my dissertation, which I’ll defend in a very long written document as well as orally in front of a group of professors from my program — it’s considered rude to ask a graduate student how much longer until he/she graduates, but you didn’t ask, so I’ll tell you that I probably have about 3.5 years left. (Hopefully.)

My lab studies the development of several different types of neurons in the mammalian brain, and eventually we’d like to be able to fix neurodegenerative diseases and neurological injuries using the stem cells native to the brain. I’m specifically looking at the role of My Favorite Gene (MFG) in the development of corticospinal motor neurons in the cortex and medium-sized spiny neurons in the striatum — we know it’s important, but we don’t know how or why, so my job is to look at the mechanisms of MFG function in the development of these two types of neurons. (If this sounds totally sweet, join my lab — we do take MIT UROPs. At the very least, come have $1 ice cream with me in the Mass General cafeteria. Graduate students get lonely.)

Things are going well in the lab, although I’m breeding a lot of mice right now, and sometimes I feel a little more like a mouse matchmaker than a scientist. I do also get to be a mouse surgeon, which is fun — we put pregnant female mice under anesthesia, inject DNA into the embryos using ultrasound guidance, and sew up the females. A few days later, we collect the injected brains and look at the cells that received DNA, which glow green on the microscope.

This year I’m at MIT two or three times a week, coaching the cheerleading squad. When I was at MIT, I cheered for four years and was captain for one; this, along with my ability to boss people around and show up on time, qualifies me to coach the squad, at least nominally. Mostly I think I just tell cheerleading stories from the olden days, throw Lulu up in the air (pics or it didn’t happen), try to remember forgotten cheers, and get way too emotionally invested in MIT athletic events, but it’s great to be big and strong again — I needed an excuse to get back in the gym. 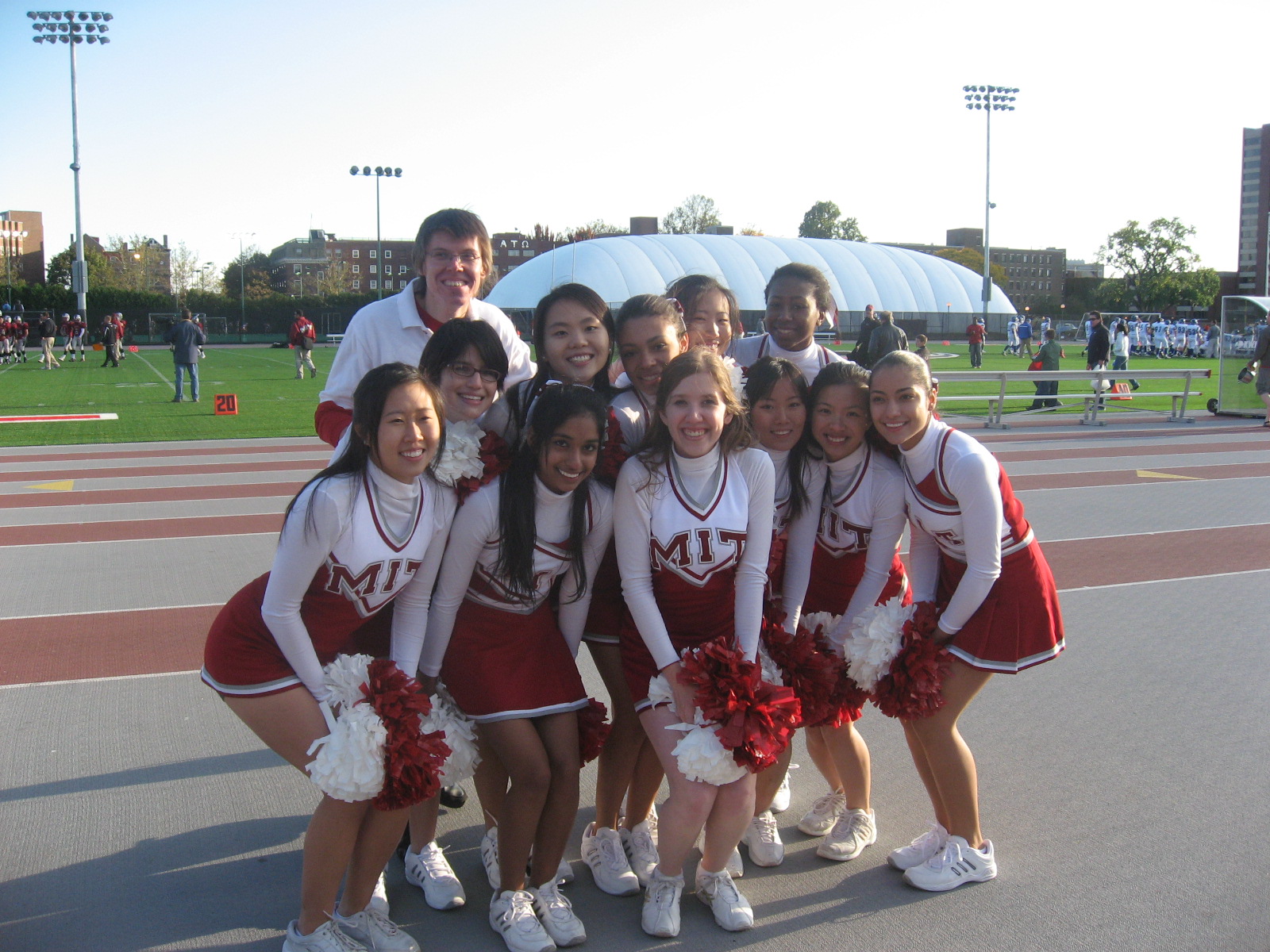 I spend the bulk of my free time hanging out with my curly-haired husband — we like to cook together and go to Target (married life! it is exciting!). We also do dorky things for each other; for example, for our one-year wedding anniversary, he designed a mouse brain model in Solidworks and printed it for me on his office’s 3D printer (picture, which does not really do justice to the awesomeness). I was thrilled, and everybody in my lab is totally jealous. He went a little more traditional for Christmas, getting me a diamond necklace and a four-foot light-up tinsel giraffe with a Christmas hat on it. (EDIT: For real. I got him a Nintendo DS Lite, a new pocket knife, and a Transformers belt buckle to wear during ski competitions. We think frivolity is a very important aspect of our gift-giving.)

I also spend a lot of time on the internets answering questions about MIT and college admissions and life at my internet home, which, contrary to popular opinion, is a good place as long as you’re willing to actually contribute instead of just pontificating. (Ahem.)

I’m busy — almost as busy as I was when I was at MIT. Busy is good.

21 responses to “neighborhoods we move into and come to love.”