A Supposedly Fun Thing That I’ll Probably Do Again by Yan Z. '12

My first Fourth of July in Boston was spent on an inflatable 61-inch-long mattress in the middle of the Charles River, drifting underneath the hulls of pearl-white private yachts and Coast Guard patrol ships as I slowly succumbed to a four-hour soak in liquid described by writer Bernard DeVoto as “foul and noisome, polluted by offal and industrious wastes, scummy with oil, unlikely to be mistaken for water.”

Might I provide an illustration of my less-than-seaworthy vessel? Crafted from “heavy duty” vinyl, deluxe’d out with a cupholder and five disco-colored stripes underneath a transparent plastic top, this nautical party ship cost all of $10.99 at the neighborhood Walgreens. 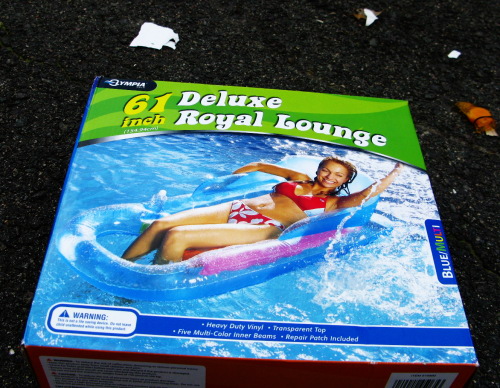 (Notice the torso-sized hole through which the model blithely dangles the sub-knee portion of her legs as she splashes in crystal-colored, chlorinated pool water with an eye-watering smile blazing across her sunny visage. I duct taped a garbage bag around the hole because I didn’t want my legs to be amputated by radioactive flesh-eating eels in the Charles River.)

Generally, life-enriching businesses such as floating downstream on the busiest river in Boston during the busiest hours of the busiest night all year begins busily with the best idea ever; this one began with The Best Idea Ever. Literally: http://www.projectbestideaever.com

One anonymous participant, describing the etymology of Project Best Idea Ever: “So I said, ‘Why pay for a yacht when we can just make a giant flotilla of inflatable rafts with a hot dog grill in the center raft?’ and [name I don’t remember] said, ‘That’s a great idea!’ Then [other name I don’t remember] said, ‘No it’s not, it’s the best idea ever!’ So the name stuck.”

The basic tenets of Project Best Idea Ever are:
1.Get rubber inflatable rafts. 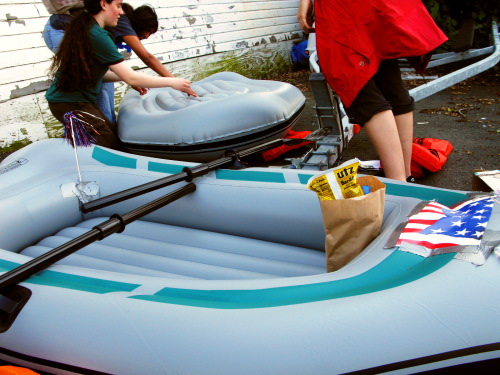 2.Make rafts safe by Coast Guard standards by attaching glowsticks. (No kidding.)
3.Launch rafts onto the Charles River around 6 pm on July 4th.
4.Paddle downstream until gathered under the Harvard Bridge. Fire up a barbecue grill on the leader raft, cook meat, pass meat around in buns that have been fingered by an uncounted number of people before reaching your raft.
5.Wait until sundown, paddle further downstream in near pitch-black darkness until accidentally crossing the Do-Not-Cross line, then frantically paddle back lest a mammoth, explosives-laden barge mow down your raft like a rubber ducky in a bathtub of cats.
6.Lie back, watch more than 20,000 pounds of explosives detonate from the closest distance allowed by law.

Approximately 95 people this year heard about Project Best Idea Ever and thought, “This sounds foolproof.”

The deadline to register for PBIE happens to be June 28th; I happened to be making my Independence day plans at 7:30 pm on July 3rd. Someone once told me in kindergarten that I could do anything if I tried, so I ignored logical reason as I walked to Walgreens and bought the most river-friendly floatation device on sale, which happened to cost $10.99 and contain a manhole-sized hole for leg-dangling.

The following evening, I hauled seacraft and safety gear (i.e., glowsticks) to the launch location under the Boston University bridge, where I grouped with Rod (unpictured) and Alorah (pictured) from pika. 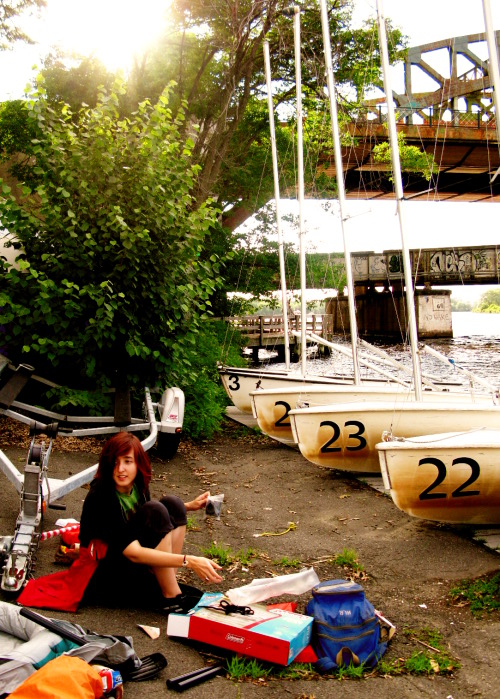 A nearby group from Olin substituted a pirate-themed kiddie pool for the standard grey PBIE-provided rafts. Something tells me that the steering wheel wasn’t functional. 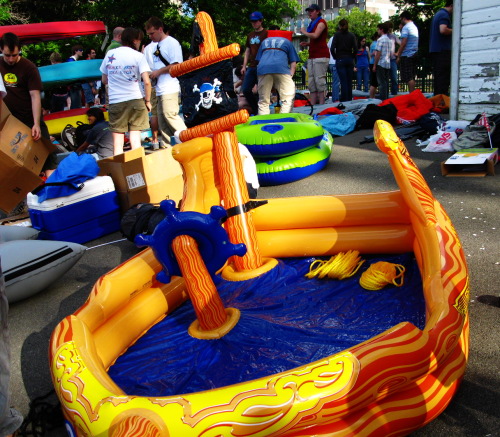 A word about safety: it appears that the official requirement for a raft on the Charles after sundown is two glowsticks, yellow in front and red in back. In consideration of the dubious legality of the inflated mattress (Does it count as a raft? If so, which side is the front?), I decided to be extra careful and attached four glowsticks instead of two. This unwittingly turned out to be an act of foresight, since one of the glowsticks promptly dropped into the river and another was unreachable given the weight-balance confines of the mattress’ dimensions (meaning that I couldn’t break it without falling overboard into the waiting tentacles of a flesh-eating eel). 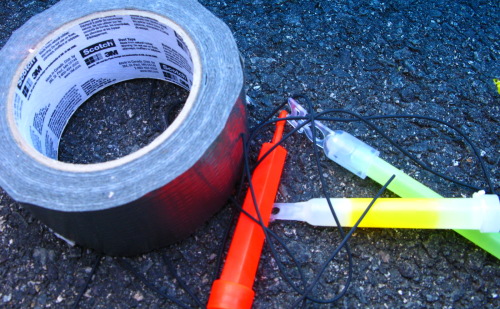 In the interest of survival, I also carried along a backpack with a flashlight, a headlamp, extra batteries (all of which were the wrong voltage, I later discovered), leggings, a towel, a granola bar, and some hummus. Everything except the last two items were completely useless during the journey; the granola bar and hummus rescued me from suppering on a hot dog three steps removed from direct contact with the Charles*.

I had no paddles. Luckily, Rod had rope, so the 61-inch Royal Deluxe was florescently hitched to Rod and Alorah’s raft. Whereupon I lingered in a borrowed jacket 8 sizes too long and gazed proudly into the plastic soul of my reborn, re-safetified* raft.

*safetify: vb, to make safe. Ex: “After crashing his first car into a maple tree, John cautiously decided to safetify its successor by covering the windshield in a plastic inflatable mattress and two glowsticks.” 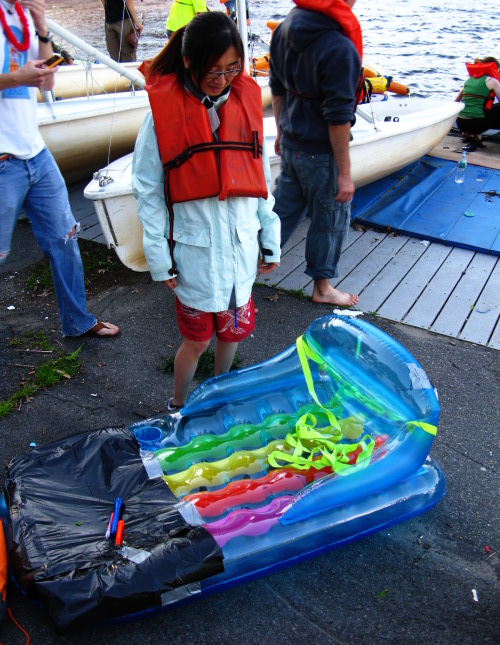 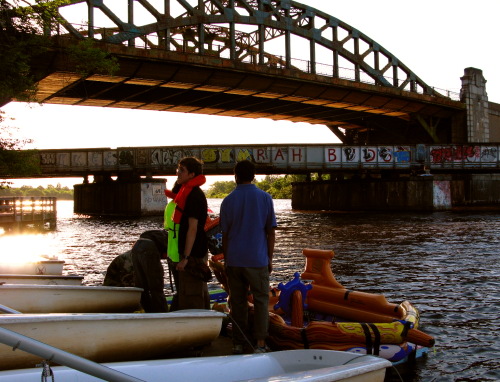 *Ironically, there was one point later in the night when all the boats were attached together flotilla-style and someone realized that none of the rafts were anchored. It turns out that the only boat with an anchor was the Pirate Pool, whose members thusly saved all 95 of us from floating aimlessly to our watery deaths or the Boston Science Museum, whichever one comes first.

With anxiety and anticipation clogged in my throat like a soup of strong medicine and butterflies, I nudged my raft off the measly crust of shore serving as a dock. Breathlessly, I looked down: it floats! Like, on top of water and everything! And the mattress wasn’t even dissolving yet!

Suspending all fear of an unplanned burial at sea, I piled limb by limb onto the raft and drifted off into the mirrored sunset as lines from Joseph Conrad’s Heart of Darkness crept into my internal dialogue with river and sky. 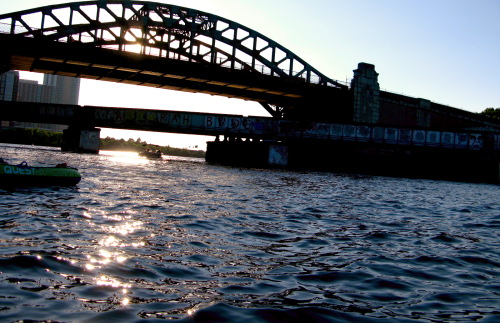 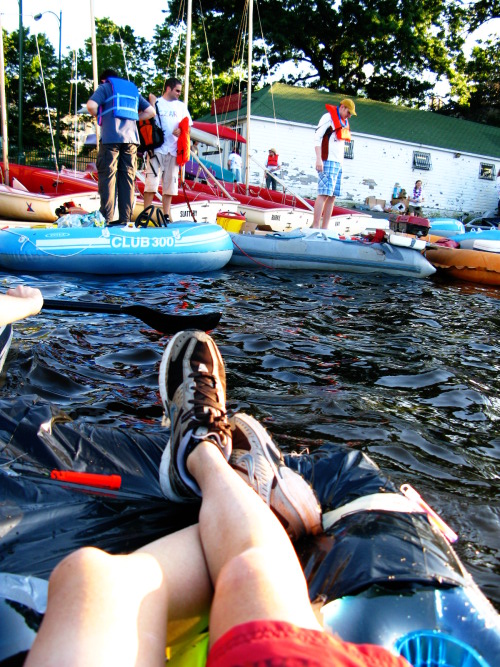 Polluted as the water may have been, it carried a dim loveliness in the fading July sunlight, winking brightly into my unprotected eyes and coquettishly spilling onto my raft until I was hopelessly drenched. Slowly I slipped into a comfortable intimacy with the asymmetrically rolling waves, sloshing the mattress to and fro like a cradle rocked by a babysitter with coughing fits. 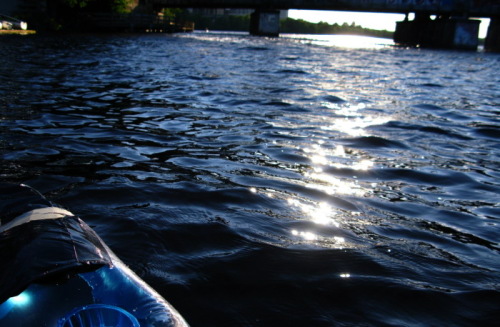 Extra props to Rod and Alorah are by now overdue. While I was snapping pictures and desperately avoiding thoughts of whatever liquid was scarily seeping through my coat pockets, Rod and Alorah were cheerfully paddling downstream, dragging my raft along like a dog with no legs and a manhole-sized hole in its underbelly. 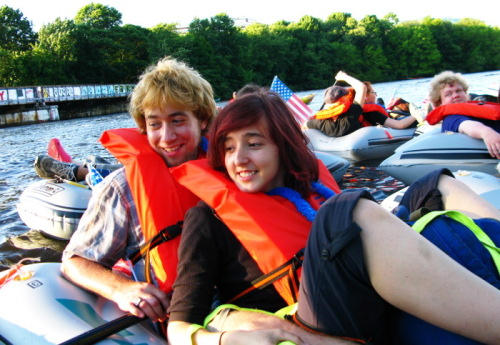 The 45-boat flotilla regrouped under the Harvard Bridge around 8 pm, inspiring no shortage of intrigued glances and cell phone photography from bridge-bound spectators. Grilling coals ignited; as promised, chili and hot dogs and certain American beverages were circulated boat-to-boat. We camped there for a few hours, exhausting the possible modes of entertainment provided by a beach ball and 80+ paddles. Matt Ritter turned out to be the Pete Sampras of paddleball*, which would have made me proud except that every successful volley resulted in droplets of Charles River pinging against my forehead.

*Played exactly as it sounds. 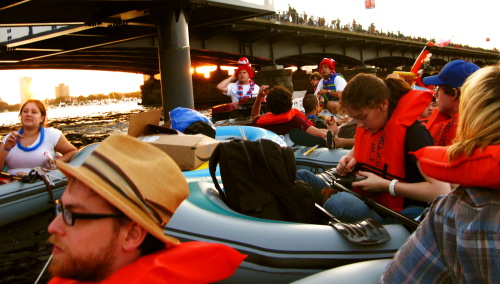 Disappointingly, I’m not an athletic person when confined to a 5′ x 3′ rectangle that flips over if I try to move too fast; like all good losers, I gave up and took a nap. 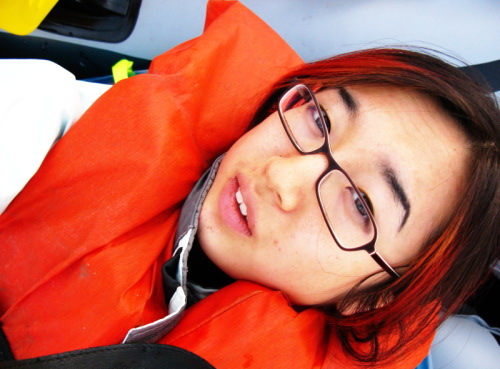 When I awoke, the raft was again drifting, vaguely directionless in the half-dark. Every cell in my body from the kneecaps down was jellified in a wet, cold numbness. Ships loomed overhead, sometimes looming perilously-close-to-head, imposing as like nautical tanks but far more yuppie-ish. I could have scraped the side of this one with my earlobe. 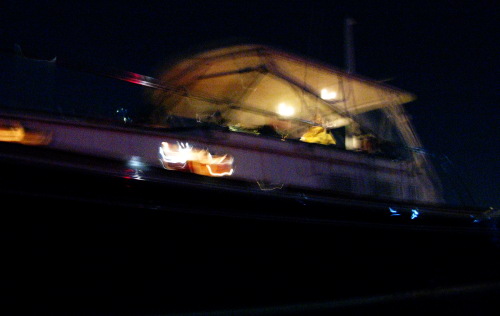 Around 10 pm, someone in our archipelago of grey rubber realized that we were too close to the barges that were about to set off the fireworks. Paddles scrambled to scoop us back to observation distance instead of gunpowder-blasting-into-your-eyes distance; successful, we roped the rafts together and waited like impatient kindergarteners during a PBS fundraiser telethon. Minutes inched by like glaciers. Breaths lingered in the chilled summer sky while I achieved inner peace with the ickiness in which I was physically, now spiritually immersed. At 10:35 pm, the sky cracked open like a ripe melon, dark and sweet with gunpowder. Jagged harpoons of light pierced behind my eyes; the nether ends of my ears gulped with explosion after explosion. Each pop of hot white sparks sizzled impossibly close to my face, close enough to spill into my skull and shake the neurons into a caffeinated state of overstimulation. With it came the joyous, childlike blankness of a successful lobotomy; waves and ship, moon and skyline were obliterated in 100 tons of explosives crunched into 21 minutes of innumerable heartbeats. 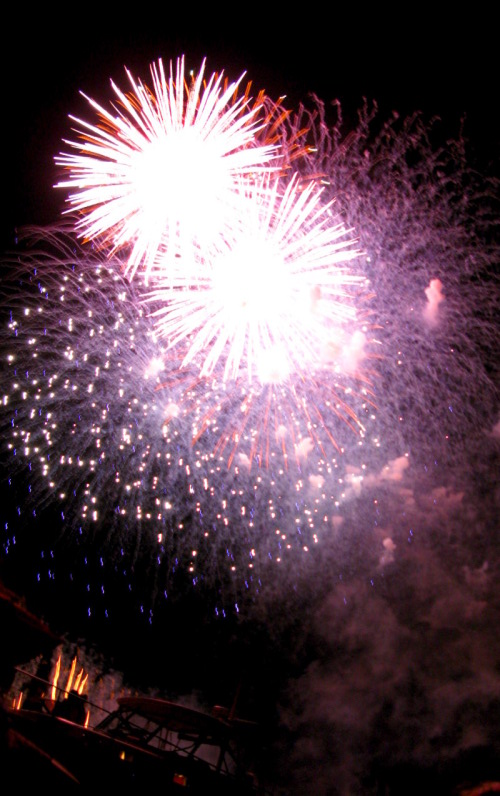 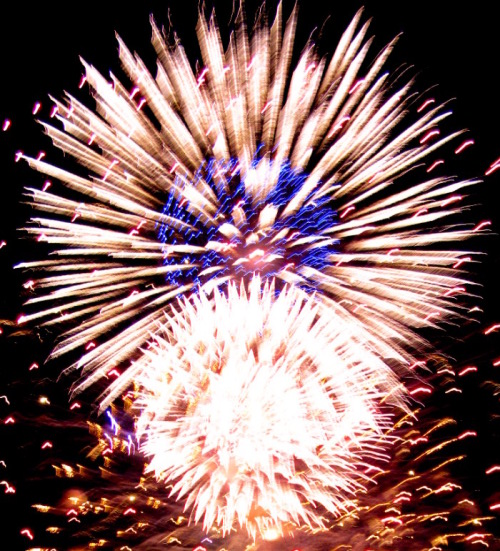 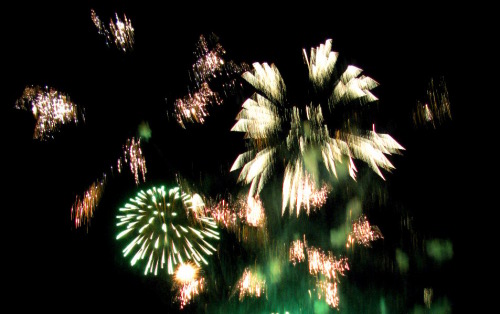 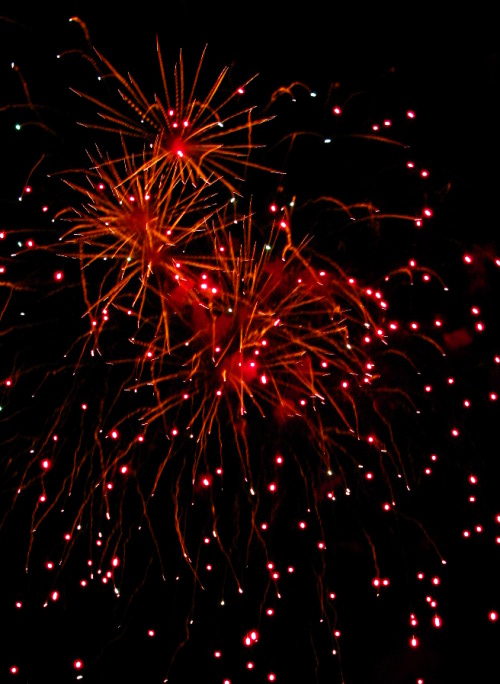 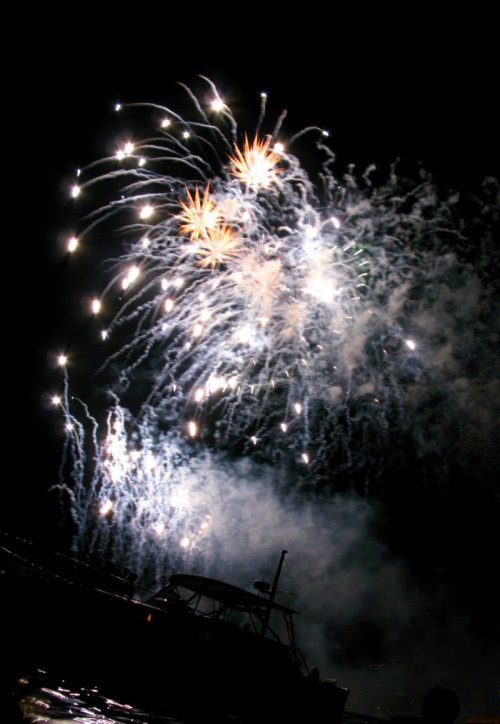 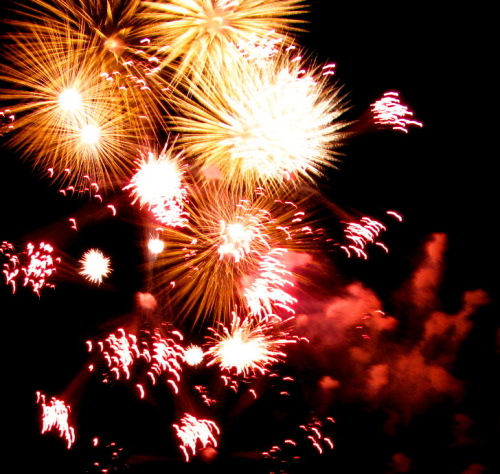 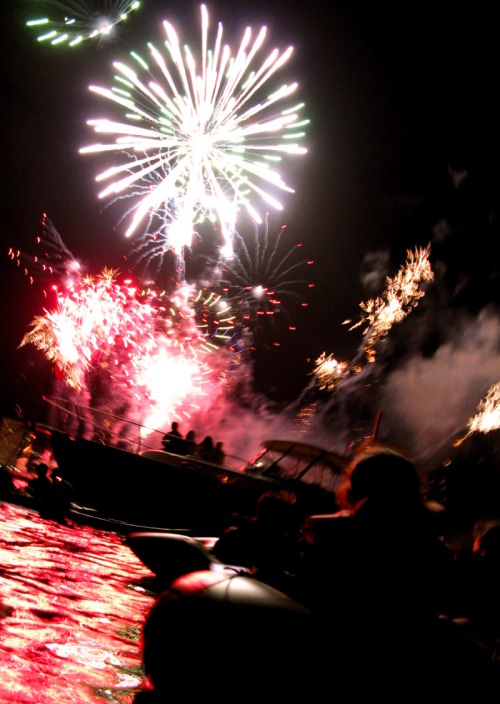 (None of the pictures were taken with zoom.)

Floating in a feathery, fiery lightness, riffed by gentle ripples of cold water, I silently vowed to bring a wetsuit next year.