It’s late in the afternoon, and the sunlight is streaming diagonally across the piazza, splashing rays of golden yellow onto the worn, cobblestoned city square. Aside from the ever-present pigeons squabbling over pieces of bread, the plaza is deserted except for an eccentric figure, dozing against one of the sandstone pillars with what appears to be a foldable easel and a bag of paintbrushes slung over his shoulder. His slumber is abruptly interrupted, however:

“Giuseppe! É tardi! Wake up!” An attractive young woman clad in a white cotton dress nudged the sleeping man, who had slumped over and is now sprawled out on the ground. “For goodness’ sakes! Are you going to come see me play tonight?”

“Vattene! Let me sleep some more.” Giuseppe resumed his position against the pillar and closed his eyes again.

“Mamma mia! You’ve been sleeping forever. Wake up! Wake up!” The woman grasped his shoulders, and started shaking him fervently.

“Ay, Luciana! Va bene! I’m getting up now…” Yawning, he rubbed his sleepy eyes and began to stand up. “Where’s your concert tonight?”

“Giuseppe! For the hundredth time, you very well know where it is! Goodness, have you even forgotten what you promised me when you saw me play last time?”

“Mm? Oh wait, do I owe you another lasagna? But I don’t remember making a –” At this point, he was abruptly interrupted by a sharp tap to the head.

“No!! Dio mio, at this point, I don’t know how many lasagne and tortellini you owe me already, given the rate that you lose your bets with me. But you surely remember this time?! You said you were going to…?” Luciana glanced up hopefully.

“Oh! Amore mio, I promised you a painting, didn’t I?” Luciana nodded up and down vigorously.

“Giuseppe, I want it to be with my lute. Vieni, let’s go to my performance first. Afterwards, let’s go to Luigi’s and you can paint me there. Make it a good one!”

Winking, Luciana took his hand and the couple headed off, with the fading rays of the sunset glimmering behind them.

And thus the Professor of the History of Arts speaketh,

“Thou shalt visit the Museum of Fine Arts, procure a Postcard, and assimilate thy intimate Understanding of the Complexities of the Craft of Oil Painting in a written Composition discussing both the Merits and the Flaws between an Original Work of Art and a Reproduction. Make absolutely certain to provide an elaborate and thoughtful Discussion of important Elements such as Color, Texture, and Dimension in thy Discourse. Go forth and be at Peace.”

Having thus decreed by the Professor, Oasis embarked on an epic Journey. 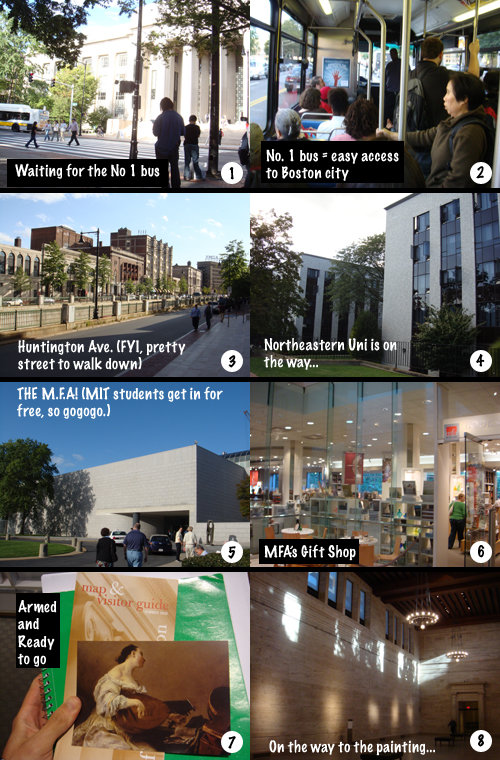 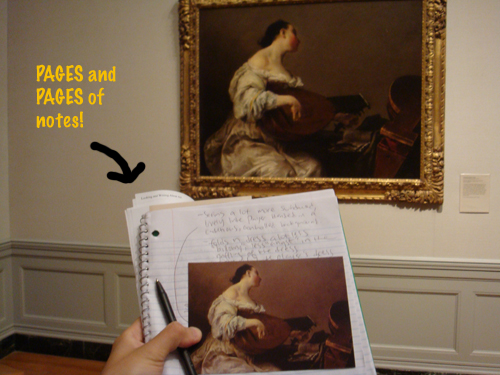 I spent two hours in front of that painting, jotting down notes and analyzing every single inch of that painting. I was there for so long that the security guard got curious and came over:

“What are you doing?”

“Oh, a paper for my Art History class.”

“What school are you from? Mass College of Art?”

“Wow, an art student at MIT. Well, I’ve never heard THAT before!”

(and then I have to explain to him that I’m actually a bio student, and I’m taking art for fun. MIT does have an architecture department though, and visual art is categorized with architecture.) 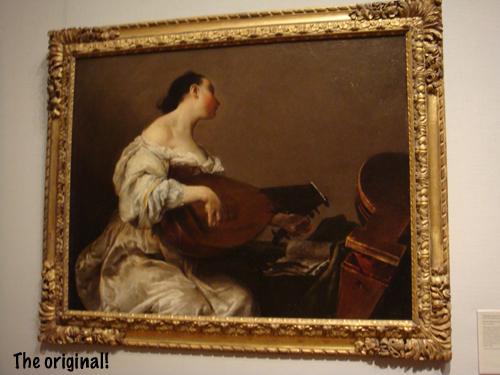 Sooo, I came home and assimilated by 13-pages of handwritten notes into a 2,500 word essay.

Anyways, the moral of the story is – Introduction to Art History (4.601) is this wonderful class that I discovered by chance this year. The actual story is kind of complex (ha), so here goes:

When I was on my way back from Central America, I had to transit at LAX so I told my friend who was studying at Biola University there that I hope to stay for a bit in LA and visit her before heading back to Boston. Sooo, I went over to Biola when I got to LA and had a really nice chat with her till 4 in the morning (she was my high school classmate who I haven’t seen in a year). That night, she told me that she took Art History during the summer and I was intrigued by all these stories and anecdotes that she was telling me about the class. So it got me thinking…”hmm, I wonder if I should go and explore Art History?”

When I was in high school, I LOVED history. Our school only offered APUSH, so I went ahead and did AP Euro and AP World on my own. I loved history so much that at one point I flirted with the idea of majoring in history in college (but called it off because the rational voice in my head was nagging me against it). However, I’ve always only been exposed to traditional history, since I was always a bit suspicious of anything that has the word “Art” in its title (I nearly failed elementary drawing). Having the conversation with my friend, however, actually opened my eyes to this exciting new form of history, which I’ve never actually thought about before. Moreover, on a separate note, I’ve also been wanting to take a class at Harvard recently in order to experience a different teaching style.

Thus, during the summer, when I was UROPing here, I was looking up history offerings at Harvard for the fall semester. After visiting Biola and getting the idea of Art History in my mind, I became curious about their History of Art and Architecture 10 (which is basically the equivalent of 4.601 here) and started looking up info about the class. I got as close as procuring a cross-registration form from the HASS Office until I decided to double check Harvard’s final exam schedule again and discovered that in fact they DID NOT change their exam schedule this year to be before Christmas (Harvard traditionally has their fall final exams during our IAP, and someone told me earlier that Harvard changed it this year to be the same as our final schedule). Having made plans for IAP already, I called off the notion and went back to the regular MIT HASS classes that I’ve pre-reg’ed for.

Then my friend from Wellesley comes along and tells me that she TOO is taking Art History (albeit at Wellesley, which apparently has the first Art History course in the nation). By this point, I’m convinced that there is just too many coincidences going on and under her exhortation of “you know, you should really just do the things that you love,” I started exploring 4.601 at MIT.

I was hesitant about 4.601 for several reasons:
-MIT is a tech school. How good can ART HISTORY be at a school that has Technology in its title?
-I am already taking too many HASS classes and I don’t really need the credit. What if the class turns out to be unnecessary stress on my schedule?
-Historically, there isn’t a stable lecturer for the class.
-I already have 5 classes (60 credits) registered for the Fall. Adding 4.601 would put me at 72 creds.

But then I went to the first couple of lecturers, and the professor opened the class with a couple of intriguing questions that totally got me hooked into the class.

One such example was:

Going by your FIRST INSTINCT… 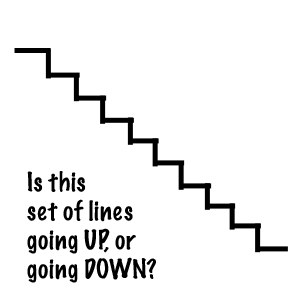 The coup de grace came when I was eating Chinese food a couple of days ago and I opened my fortune cookie, which contained the following message:

“Courage will bring you good fortune.”

I don’t know much about “good fortune,” but taking that leap of faith really paid off. =p

22 responses to “A Woman and Her Lute”