Advanced Standing Exams: know your stuff, get out of a semester-long class! by Anelise N. '19

You should really consider taking them.

MIT has A LOT of graduation requirements.

Most colleges have some sort of breadth requirement. MIT, being a technical school, has a weighty 8-class humanities minimum (the Humanities, Arts, and Social Sciences—HASS—requirement), PLUS a technical core encompassing introductory biology, chemistry, physics, and calculus (these classes are known as the General Institute Requirements—GIRs).

When looking at MIT, my first thought after learning about these graduation requirements was “But I’ve got a ton of AP credit…won’t I get out of a lot of these these extra intro subjects?” 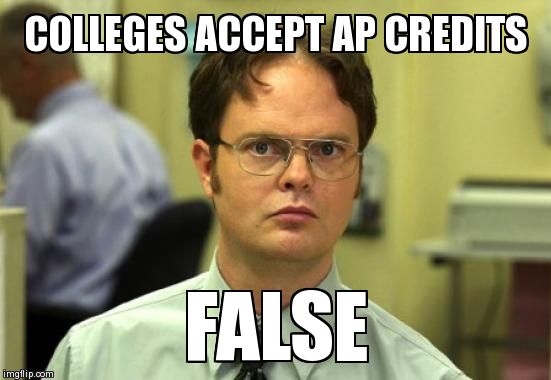 Unfortunately, the answer is no. MIT gives really remarkably, disappointingly horrible AP credit—the worst out of any school I researched when applying. If you score a 5 on Calculus BC, you can get out of 18.01, Single-Variable Calculus. If you score a 5 on both Physics C tests, you can get out of 8.01, Physics Mechanics (you’re still on the hook for Electricity and Magnetism). That’s about it.

(Ok, I’m exaggerating a little bit. You can get general unit credit for a lot of other AP tests, and if you score a 5 on English Language or Literature, you don’t have to take an essay evaluation over the summer and you have more choices for introductory humanities classes. But the APs mentioned above are the only ones that let you out of GIRs, and there’s no way to wiggle out of your eight HASS subjects.)

This is all really sad, because a lot of high school students work really hard racking up AP credit hoping to pass into more interesting or pertinent courses.

Now for the good news: MIT has in place its own, pretty generous system of exams to help you pass out of GIRs whose material you are already comfortable with. These tests are called Advanced Standing Exams (ASEs).

An ASE is not quite like a placement test because it doesn’t let you skip lower-level classes, but it instead serves as a quick way of fulfilling the credit for those classes. ASEs are created by the department that runs the course and for the most part approximate a final exam in that class. If you take the ASE, the grade you get on the test stands in for a grade in the corresponding class. On your transcript, it’s as if you took the class and got the grade you scored on the ASE. (However, ASE grades don’t factor into your GPA. For more details, see this page on Grading Policies for ASEs.)

Now here’s the really awesome part: because ASEs are treated essentially like normal classes on your transcript, that means that if you’re a freshman on Pass/No Record, ASEs taken during orientation or fall-semester finals are also graded P/NR. This means that as long as you pass the test, you get full credit for having taken the GIR, and it makes absolutely no difference whether you scored a 99% or a 50%. If you fail, no harm done. In fact, if you fail an ASE during orientation, it doesn’t even appear on your internal record. So you have a shot at earning class credit, with very little downside.

What I’m saying is that if you’re an incoming freshman to MIT, you should really consider sitting for some ASEs.

Coming into MIT, I heard some strong words of caution against ASEs. A lot of people warn against trying to pass out of subjects willy-nilly, because it is important to have a firm background in the core subjects to succeed in later classes. That’s true, but I wanted to give the other side of the argument. If there is a subject you are really comfortable with, or one that you doubt will be of much relevance to you in your major, I think it makes sense to try and skip out of it, for these reasons:

1. It’s efficient (and effective).
You can brush up or study for a class over the summer and get out of a whole semester of work (including problem sets!). Take it from someone who at this point has done her fair share of problem sets: that’s a good deal.

Also, I think it’s important to mention that the ASEs are not easy. They are challenging and in-depth—some of them can be harder than the final for the corresponding class. You’ll be seeing things like metallic molecular orbital diagrams in Chemistry and rocket problems involving differential analysis in Physics. If you can pass the ASE, you actually do have a pretty good grasp of the material.

2. It saves you money.
MIT is expensive. You should use your tuition dollars on classes that are important and interesting to you. Especially considering that for a lot of the GIR classes, the material is available online in full, for free (keep reading for more info).

3. You get more flexibility in your schedule.
Having a couple extra free units in your schedule can be a real relief. It can let you explore some different subjects if you’re trying to figure out what to major in. It can give you more room to minor or double-major or graduate early.

4. You can take cooler or more relevant classes
If you don’t have to take intro chemistry, you can take something cool instead! If you know that you’re going to be a mechanical engineer, and you never want to see biology again, it makes much more sense to pass out of bio and get a head start on differential equations, or have room for an advanced Mech-E class later on. Plus, if you’re a freshman and you don’t have to take GIRs first semester, that means you can take harder or unfamiliar classes on Pass/No Record.

5. They feed you breakfast.
On the day of the test. Just thought I would mention it 

6. You have nothing to lose.
Except for the three hours spent actually taking the test…which is really small change considering the benefits.

Coming into MIT, I knew that I wanted to ASE out of as many classes as I could. The opportunity to get out of a semester-long class by taking a test was too much of a gift to pass up. After studying over the summer, I sat for Biology, Physics (Mechanics), and Chemistry. I passed Bio and Chem but failed Physics :(

I knew/remembered very little from high school about the three exams, so I taught myself most of the material over the summer. Thankfully, MIT has posted almost all the materials (lecture videos, homework, past exams, worksheets, etc.) from its courses, especially Bio and Chem, online at MIT Open Course Ware. While studying for the tests, I basically took the corresponding MIT course online. (In fact, sometimes I catch myself saying I “took” MIT bio, even though I studied for the class completley virtually.) I took studying seriously, scheduling myself carefully and committing two/three days per week to it over the summer.

For your reference, here’s a breakdown of the classes I studied for. 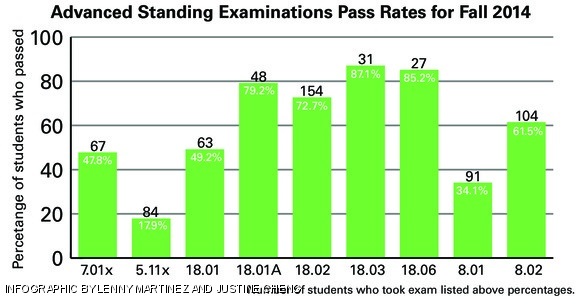 I decided to study for bio because it had a pretty high pass rate out of the tests I was considering and it is more conceptual than quantitative, and I have an easier time self-studying conceptual subjects. I didn’t take AP Bio in high school but was able to review the remarkably thorough MIT OCW class online in three weeks. I watched all the lectures, did all the homework, and took the practice final at the end to see if I would pass. I also bought the (old) textbook associated with the OCW version of the course on ebay for $5, but I only used it a little bit. In fact, studying for biology was often a pleasure, largely owing to the delightful lectures of Professor Eric Lander, who through his enthusiasm made me excited about everything from primers to dead mice. *Side note: MIT biology is really different from high school biology, and even though I reviewed materials online, it made me a lot more interested in a subject I thought I had no interest in—might be worth checking it out even if you already dominated bio in high school.

Physics was less of a pleasure because it came less naturally to me and the materials on OCW are less complete and cohesive. For instance, no lectures are available through OCW (though if you look hard enough you can find some elsewhere on the Internet wink wink). Even though I took Physics B in high school, I spent 4-5 irritating weeks working problems over the summer in a frequent state of confusion and dismay, which culminated in me not passing the test. However, the test is definitely doable.

I took 8.01, Classical Mechanics, first semester, and even though I didn’t pass the ASE, having studied for it made the class much easier. My lecturer (Professor Dourmashkin) was an amazing teacher and did a wonderful job making problem-solving organized and methodological, which helped me a lot, so I was able to put physics on the back burner and focus on other classes and extracurriculars.

In the last two weeks of summer break, I decided last-minute to see if I could cram Chemistry. Chem is a notoriously hard ASE, largely I think because it covers concepts that are not touched on in AP Chemistry and has intense time pressure. However, the materials online are complete and include fill-in-the-blank style notes, which made note-taking for the course very fast. I spent two weeks spending almost every day in Starbucks watching Chem lectures and doing problems…during which time I enjoyed splendid people-watching, got asked out by a complete stranger, and irritated countless patrons by hogging the corner table. (I think I could write a blog post just on a “Portrait of a West Hills Starbucks”).

If you’re thinking of studying for ASEs, I suggest you choose your tests carefully based on your previous exposure, what kind of knowledge you are best at learning/retaining, and how hard the tests are.

I’m really glad I passed out of Chem and Bio. Because my schedule is more open, I was able to take 18.03 (Differential Equations—a requirement for Computer Science and a lot of other majors) on Pass/No Record, which is great because otherwise I probably would have had a nervous breakdown at some point during the course. This semester, I was able to take 6.s04 (now 6.009), a beginning software engineering class, in addition to 6.01, the introductory EECS class. Being able to take that extra computer science class second semester was invaluable. I got a lot more comfortable with coding a lot quicker and was able to get a software internship over the summer, which will give me even more experience. On top of that, I’m now done with all my GIRs, whereas some other freshmen had to make a choice between not taking any classes in their prospective major or deferring an introductory bio or chem class (probably until senior year).

In summary: ASEing out of subjects was a really good decision for me, and it’s a really good option for incoming students. I know a lot of people who wished they had taken more ASEs; I don’t know anyone who regrets sitting for one.

That’s pretty much all I have to say about ASEs! You can find more information about specific tests on the department websites below:

And feel free to comment with questions or shoot me an email if you have questions about specific tests!