Longtime readers may recall that I am a big fan of the His Dark Materials books. The themes, concepts, and narratives from the books have shaped how I move through the world, as you may have seen in my blog posts thinking about the branching paths we choose to take (or not), or how our new graduates might consider their obligations to their fellow humans. In a way, I think my entire theory of the blogs, and what we try to do with them, is inspired by a line from the Amber Spyglass, as the ghost of an old woman whispers to Mary Malone what she is supposed to do to help our heroes fulfill their destiny:

Because the blogs are how we tell you stories. Maybe that’s why so many bloggers — including Mollie and Sabrina and Chris and Jess and Nisha and more — have found meaning in these books too.

You may be encountering this universe for the first time now⁠01 IN 👏🏻 THIS 👏🏻 HOUSE 👏🏻 WE 👏🏻 DO 👏🏻 NOT 👏🏻 ACKNOWLEDGE 👏🏻 THE 👏🏻 2007 👏🏻 FEATURE 👏🏻 FILM. because of the new BBC/HBO television adaptation that premiered this past Monday. I had a watch party at my house that Nisha and Rona attended. It was…good. I’m obviously too attached to the books⁠02 Literally, given my <a href="https://www.instagram.com/p/BlbA-MHDoAP/?hl=en&taken-by=markwosgerau">quarter-sleeve tattoo</a>. to truly let myself enjoy the show uncritically, but the friends who were there who hadn’t read the books before (like Rona) seemed to enjoy it too.

But whether you’re new to HDM or returning, I’ve got a fun little Internet thing for you.

Back in 2018 — before the adaptation was even announced — my friend Matt, who was in the same research lab as me in grad school (and the same pre-school as me many years before that) and for whom the books played a similarly important role, proposed that we work on an emoji alethiometer app to give people the experience of carrying around a golden compass in their pockets. While I didn’t get as involved as I would have liked, he and a few friends (fellow MIT alum Dan Schultz, designer Margo Dunlap, and developer Lou Huang), all affiliated with Bad Idea Factory, started working on building one, and today they launched it.

As I wrote in a description elsewhere:

The Emoji Compass is an alethiometer for the smartphone generation, combining the interpretive flexibility of emoji with the uncanny intelligence of a mobile device. It’s powered by Dust (and React). Users move hands around the dial to ask a question, relying on layered meanings suggested by the app or held in their head. Then, the compass will respond with its own series of selections to generate an answer. We like to think of it as akin to the astrology apps that have surged in popularity, except for this one, you don’t need to bother you mom to find your birth certificate first. 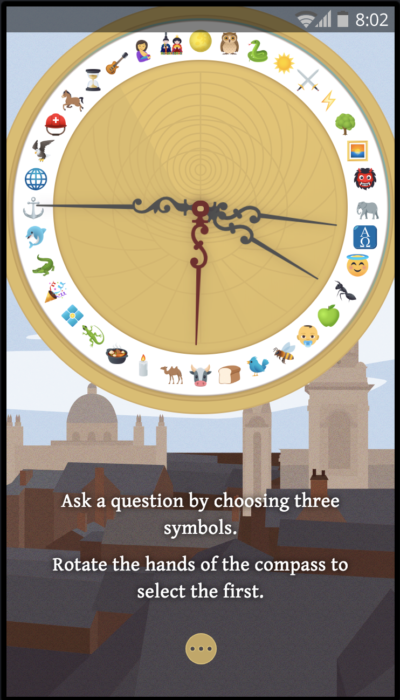 Some of our programming readers might be interested to know that the iOS app version of the emoji compass is possible because Dan made a wrapper that turns a web app into an iOS app, an open source project that he unhelpfully titled “iOS Virus,” which you can access, fork, and/or modify on Github here.

I asked my friends who made this app to talk a little bit about why they decided to spend so much time on this. Here’s what they said:

I had never read this book, so naturally I jumped at the opportunity to spend countless hours on a tribute to a subtle detail that only fans would really understand. I generally agree to work on everything I’m invited to work on; it’s a real problem, and I plan to use the Emoji Compass to make more effective decisions on what projects to work on in future. I just hope we made Aslan proud.

i also did not read the book and I am pretty sure I only know about HDM because someone at my church warned me about it. I have a lot of former colleagues I need to justify my last two years to.

It’s just a simple app, Michael. How long could it take? 10 hours?

Petey was the first person I’d connected to IRL about the book series, and I was happy to learn I wasn’t the only person whose entire moral code had been informed by a mid-90’s Young Adult series. It emboldened me to question Authority while rooting me squarely and irrevocably in the corner of Good in that old battle. After two years of development, coinciding with the premiere of the show, we have managed to get this labor of love live!

I hope, in this time of many decisions, the Emoji Compass helps you make some of yours. Over on the HDM reddit, people are sharing what they’ve learned about the future. If you have suggestions on how to improve it, feel free to note them on Github. In the meantime, I’m going to get back to reading applications and divining futures in more conventional ways.