DID YOU KNOW? The famous Pioneer Zephyr trains of the 1940’s were named because a railway president wanted his trains to be considered the “last word” in transportation. He had originally told his coworkers to literally look up the last word in the dictionary, but decided that “zymurgy” was not a good name for a train.

Yo, I’m in grad school. How’s that going? Well, not too bad. In a way, I can’t seem to ever get away from MIT. Half the books I use in my graduate classes were written by my MIT professors. During the first week of my product design and development class last semester, we were assigned a reading about all-around drug delivery rock star and MIT professor Bob Langer. The professor asked if anybody in the class knew who Bob Langer was. Half the hands in the room shot up, and a bunch of awestruck students breathlessly explained, “OH, he came to my school once to give a lecture, and I could totally tell that everything in this article is totally true, like when he was talking about polymer synthesis, I could really hear his attitudes toward technology licensing and start-up companies.” I was going to say, “Yeah, I know 5 people who work in Langer Lab, and I’ve worked with the MIT Technology Licensing Office.” But I didn’t say anything, because I try not to be a total jerk all the time.

I mean, not all the time. Today I was looking at an old blog entry that I had started four months ago, and I discovered that I actually typed this:

So, yo, let me say this unequivocally. Even if you graduate MIT with 72,000 credits in four years and publish 100 papers in Nature, start-up a biofuels company, write a cello concerto that is performed by MITSO, and obtain an Erdos number of 2, all of this in 4 years at MIT, if you ever ask yourself, “Do I have time for a girlfriend?” then YOU ARE DOING SOMETHING WRONG.

Man, what a total jerk. That rather harsh quotation comes from a blog entry entitled “Don’t let it control you!”, which I’ve been trying unsuccessfully to write for the past six months. That title, in turn, comes from Professor X’s final line in X3, one of my favorite movie moments of all time. I was considering keeping the title when composing this new blog entry, but I decided that Walt Whitman would be an acceptable substitute.

Because let’s get this straight. I am an old man now. There are undergrads working in my lab, and I introduce myself to them, and they say, “Oh, you’re not an undergrad, right? Because you look so much older.” When I was studying reaction kinetics on my plane ride back to the bay area, the flight attendant stopped while delivering my second cup of black coffee to remark, “Are you a grad student? I could never understand any of that math stuff!” (that’s okay, I’m bad at writing and being nice to people that I don’t know). I don’t even get carded when I buy alcohol anymore. I mean, I’m guessing that I wouldn’t. 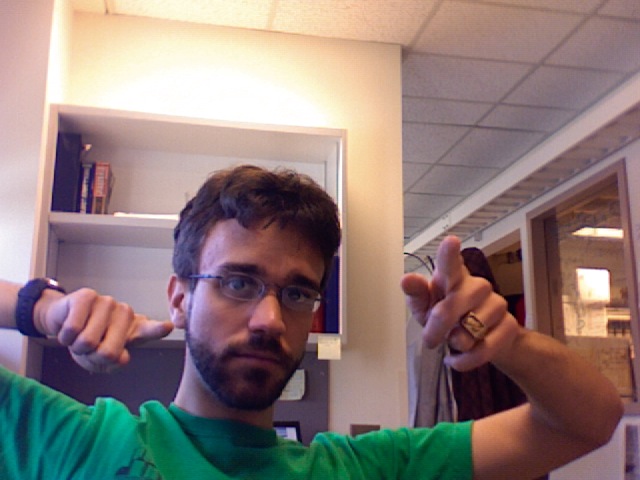 Granted, most of it probably has to do with the sweet beard that I’ve grown. A bunch of the ChemE’s decided to grow beards as part of a male bonding ritual before prelim exams in January. I just liked mine, so I decided to keep it for this month. Except for getting food caught in it, it’s been working out pretty well. You knew I couldn’t get through my last ever entry on MITblogs without posting a picture of myself, didn’t you?

But what makes this old man think of school today? Well, I’ve been systematically trying to remove myself from most of my MIT mailing lists. I took myself off my old floor’s mailing list the other day after discussion veered away from Apple Bake domination and onto discussions of which Star Wars movies they were going to watch on a given night. Which, I mean, is fun, but not really that important to my life anymore. Whereas apple pies baked 4,000 miles from me are totally fascinating in my inbox. Anyway, I actually managed to finally remove myself from the MIT Hillel list, somehow. I’m working on getting off of MTG. But I keep myself on the MITblog e-mail list, just because we’re awesome. So today I woke up to the following e-mail on the MITblog list, from one of its younger contributors:

Turns out that the aforementioned early showing of 21 is at noon…since I’m not quite willing to skip class just to see a movie, even one about MIT, I will neither be going nor blogging. If by some black magic one of you guys also has the opportunity to see it, I retract my dibs…but I really would like to blog about it when it comes out for real on March 28 (during Spring Break).

Sorry for the extra emails. ^_^

Apparently MIT is sponsoring a sneak preview of 21, the Bringing Down the House movie adaption, this week. As an old man, thinking of school, I was concerned that one of MIT’s rising young stars was “not quite willing to skip class just to see a movie, even one about MIT.” So I wrote back and linked to some entries that provided examples of me skipping school to do awesome things. The response? Apparently the blogger has a HASS paper due at 3 PM that day, and is therefore understandably nervous about going to see a movie at noon. The e-mail concluded, probably half-jokingly, “You’re a bad influence, Sam Maurer.”

I was eating a salad comprised of spinach, walnuts, grapes, peas, and goat cheese in a balsamic vinaigrette, which is clearly what have must inspired the following burst of eloquence from me.

Hokay, so HASS papers are important. But unless you’re planning to still be writing the essay at noon on the day it’s due (which, I mean, I probably would be), seriously, go to the movie. Plan to go, and then if your paper doesn’t work out on time, then skip the movie.

I’m a good influence. I didn’t realize until my senior year that it was okay to skip classes for reasons other than total exhaustion. The sooner you figure this out, the happier your MIT experience will be. I mean, within reason. Don’t skip all your 2.007 labs to go tanning on the esplanade, but if the choice is between awesome movie preview or ozonolysis, don’t pick ozonolysis.

I was actually going to write my last MITblog entry on this topic, but I got bored. You can still see the draft; it’s called “Don’t let it control you!”

And I read it back over, and I realized that this was exactly what I’d been trying to say for the past six months. I thought “Don’t let it control you!” would be a good message to conclude my MITblogging career forever. But, you know, you’ve got to be original. And plus, that entry was getting too convoluted with passive/aggressive attacks at other blogs I’d been reading, not neglecting your girlfriend, how I was a pudgy awkward kid in high school, and a symbolic 6.003 add/drop form that I hung on the inside of the door of my dorm room. I feel like this one has worked out a lot better. It’s a little bit friendlier, and I feel like it just generally is more cohesive and has more organic unity. Which, for me, is saying a lot.

So if I’m gonna gather my youthful memories and blooms, as Walt Whitman suggests, and if I’m going to leave you with one message to summarize the most important thing I learned during my four years at MIT, it’s going to be this:

32 responses to “An old man’s thought of school”