Darling, 'tis I who loves you.

DID YOU KNOW? In Renaissance Spain, when white skin was cultivated as a sign of royalty, princesses drank water from clay vases and then ate the clay, which would absorb all of the water in their bodies and give them a pale appearance. History has not recorded what happened to these princesses a few hours later.

So this will be my last MITblog entry from Europe. Probably forever. I’m just chilling here in my air-conditioned (!) hostel room, listening to the dude above me snore, and I thought that rather than reading all the entries at smashbros.com some for the bajillionth time, I should make good on my promise to write something from Spain in my last entry.

I wanted to title this entry “Now I’m a little boy in Spain playing pianos filled with flames” but it messed up the formatting on the MITblogs website, and also I’ve been thinking a lot about the song “I who have nothing,” by Jordin Sparks, because I’m totally done with all this MISTI reporting business. I have nothing! I mean, I’m not done with the parts that involve getting all the videos off of the video camera, or organizing them, or summarizing all my data, or editing the video into good five-second quotes that can pop up dynamically when you roll over “wienerschnitzel” on the new Flash-enabled MISTI website or whatever. But, I mean, the actual taking pictures and videos of people, I’m done with! Which is both good and bad. For one thing, it means I won’t get to go around Europe hearing about people’s awesome jobs and taking pictures like this one… 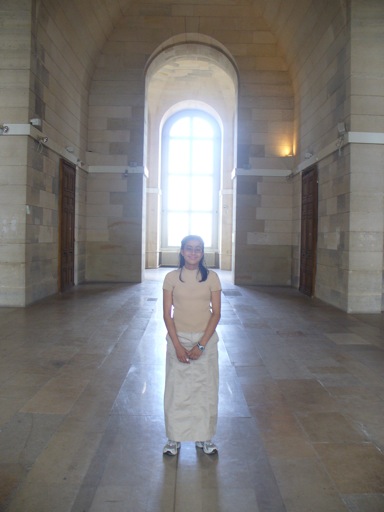 …of MISTI France intern Anjali ’09, standing along the original Prime Meridian in the Observatory of Paris… 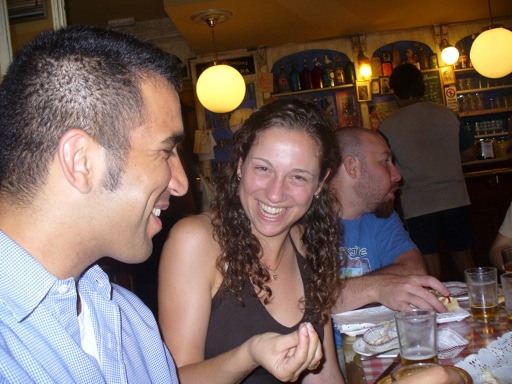 …or this one, of MISTI Spain interns Sohrab ’08 and Inessa ’09 enjoying tapas at a Spanish tapas bar. I for one was shocked to discover that tapas actually exist outside of my eighth-grade Spanish textbook. Cacahuetes!

However, being done with my MISTI reporting also means that I can stop living out of a 40-pound suitcase with a broken wheel, and start interacting with people on a real, personal basis again, instead of my conversations going something like, “Oh, that’s great that you’re working with entamoeba histolytica! Is this your first time in Europe… oh, wait, can I get a picture of you pipetting that? Or, I mean, with this microscope; whatever looks more science-y.”

I also have nothing in terms of money anymore. I’m sort of going with the whole “leave Europe with zero euros, that way you won’t get screwed by airport exchange rates” plan. So I have 6 euro-cents right now, and that’s about it. Well, actually, I have about $20.58 in my pockets right now, but 50 cents of that are in Czech kroner and the other 20 are in US dollars, so, counting currency that Western Europe actually uses, I have 6 cents. And a Sub Klub card that I picked up at a Subway in Berlin. You know, I got Sub des Tages and Sub del Dia on this trip, but not Sub du Jour. Next time, Gadget.

But I think I’ve been rationing my money pretty carefully. After my last dinner with MISTI Spain interns last night, I gazed into my wallet to find a total of 6.86 in Euro. Then, in reference to the quote, “When I get a little money, I buy books; and if any is left over, I buy food and clothing,” which I saw on somebody’s facebook profile, I spent my first three euros this morning at the Museo del Prado. I didn’t even know what was at the Prado, I just thought it would be cool. But I kind of guessed that Las Meninas would be there, and it was, and I learned a lot about it eavesdropping on three separate English-language guided tours, and the museum also had a special exhibition on Patinir, who invented landscapes. After walking around the museum for five hours I was hungry, because six pieces of buttered toast at the hostel’s free breakfast just couldn’t cut it, so I headed to the nearest Döner Kebap stand I could find, figuring that it would be a cheap way to get my last Döner fix for a long, long time. Thankfully, 3.00 euros is just about the universal standard price for Döner in Western Europe, so I was able to get a tasty sandwich with a slight Spanish flavor, but unfortunately drinks were a bank-breaking 1.20. Blast. So I went to a convenience store with no prices labeled. When the owner was done speaking in an unknown Asian language on his cell phone, I asked him how much a can of soda cost. After three attempts, I finally understood that he was saying “ochenta.” Perfecto. So I gave him a fifty, two tens, and two fives, and hoped that two years of MATLAB hadn’t diminished my capacity for simple math too much. And then I had six cents left.

OH MY STARS AND GARTERS, I just found out that the “I buy books, then food” quote is attributed to Desiderius Erasmus. Could this entry have any more organic unity?

So, six cents. Six cents and a snoring roommate. I mean, I could use my credit card or something, but, well, IT’S FREAKING SPAIN and even if I somehow find somewhere that takes a credit card and isn’t touristy and overpriced, I’ve still got extra charges for using it in a foreign country. Which, I mean, I’m more ideologically opposed to than anything, because with what they’re paying me for this trip, I think I can spare 60 cents in extra charges. There’s also the possibility of finding a Deutsche Bank ATM, which is free for Bank of America customers, where I could pick up a quick 20 euros.

But the catch is that I get free breakfast tomorrow (eight pieces of toast, two bowls of cornflakes, no questions asked), and then after checking out of my hostel and heading to the Madrid airport, I get my 15 euro key deposit back. So, while 15.06 is a little light for two days in Europe (I’ve got a one-night layover in Frankfurt), I think that 35.06 might be a little too much. Oh, like a high school senior’s relationship status after graduation, it’s complicated.

Anyway, I’ve gotten hungry since I started writing this entry, so it’s time to go do… something… about that. I can’t wait to get home, and I promise to write tons of informative entries as a lame duck blogger from the US, both here and on my MISTI blog. It’s been a long, crazy, exhausting ride here in Europe, but when you wake up and say to yourself, “Hmmm… I have an hour or two before work, I think I’ll go take pictures of myself in front of Sacre Coeur.” 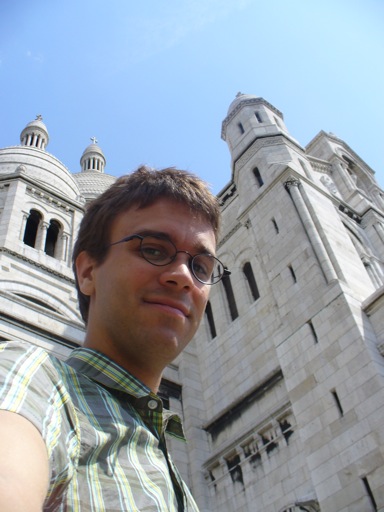 …well, it’s hard to complain too much.

19 responses to “I who have nothing”