DID YOU KNOW? The gigantic Bayer sign in Leverkusen, Germany, where I worked last summer, is the largest corporate logo in the world.

So I’m here in Germany, meeting up with tons of MIT interns while staying at sketchy youth hostels and subsisting mostly on döner. I was planning to live a little more comfortably, but after seeing the rent on my apartment in Berkeley next year, I thought it might be better to be a little more frugal.

Just playin’. But seriously, maybe it’s because I only get to eat it in Germany, but döner is seriously the most delicious thing on earth. It’s like a gyro, except the meat of indeterminate origin is slow-roasted for tons of flavor, the bread is some kind of wonderful crispy toasted flatbread, and it comes topped with three tons of cabbage and tomatoes and cucumbers and yogurt sauce. There approximately two döner stands on every city block in Germany, and you will never pay more than three euros for one sandwich. What’s not to love?

I’ve already met with several MIT interns and gotten a couple great photo-ops and video interviews. One thing basically every American working in Germany has said is that Germans are way more blunt then Americans. Whereas an American might tell you in a business enviroment might tell you, “Well, this report is pretty good, but I have some issues with pages 5 and 7…” a German in the same situation might say, “Ach! What happened on pages 5 and 7? This is all wrong. This is not acceptable!” and then kick you in the shins.

Perhaps the most obvious example of this bluntness is on cigarette packaging. Somehow, even though you can’t smoke anywhere in the US and you can smoke everywhere in Europe, US cigarette packing uses such absolutely precise language in its suggestion of the correlation between smoking and death. A label might read something like,

The surgeon general has suggested within a 95% confidence interval (z = 1.9) the existence of some linkage between consumption of cigarettes and low fetal birth weight in pregnant women aged 18 – 40, as referenced by P. Gupta and T. Cupertino, Journal of Statistical Biochemistry,
Volume 18, Page 225, Published 1998.”

Compare this to Germany where a package just says,

“Smoking can be deadly.” That’s a little less equivocal. And yet everyone in Europe still smokes! Heck, in Italy they’re even more direct. I saw a pack of cigarettes in a store last summer that just said, if memory serves me correctly,

Forgive me if the conjugation is a little off, but it basically just said, “Smoking kills.”

Speaking of things that can kill you in Germany, I was in Leverkusen the other day visiting my old roommate Kunal at Bayer, and we walked by a poster for this summer’s new Bruce Willis movie. Now, I pretty much already thought this movie had the greatest title of all time, primarily because I was in New Hampshire this month on a bike trip with my lab. The state motto there is “live free or die” which basically amounts to no taxes on beer and no mandatory seatbelt laws. It also led to conversations such as this one:

“Hey Andy, why aren’t you wearing a seatbelt?”
“I’m living free.”
“But you could die.”
“That’s within my rights. I’m in New Hampshire.”
“Live free or die.”
“Live free or die!”
“It sounds like an action movie. ‘This summer, Samuel L Jackson will live free, or die.”
“Ha, it could be the name of a Die Hard movie. Live Free or Die Hard.”
“Wait, actually, I think that is the name of the new Die Hard movie.”

So we decided that some movie producers were driving through New Hampshire one day, and they happened to see this license plate, and had this same conversation, and this is the only reason that there is a new Die Hard movie coming out this summer. But seriously, check out the advertisement in German. 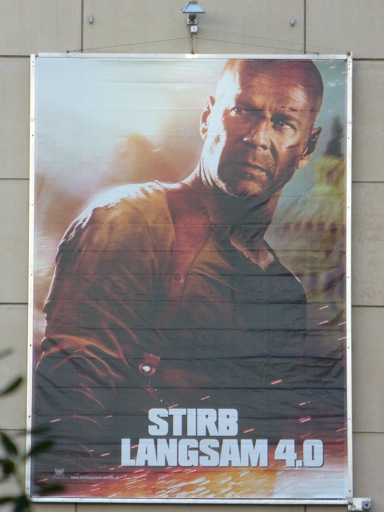 Stirb Langsam 4.0. Which means Die Slowly 4.0.. And if Live Free or Die Hard isn’t the best possibletitle for a movie that involves Bruce Willis blowing up a helicopter with a police car, the only title that could possibly be better is Die Slowly 4.0.

Also, check out the new MISTIblogs! I was going to hold off on linking to them until I understood them a little better and got them up and running, but maybe this will motivate me to generate a little more content pronto.