Today, as I was walking down Mass Ave after work, I saw some Aero/Astro students playing volleyball with a net they had set up in the Building 33 quad, and I couldn’t help but be reminded of last summer. It was my last summer before I came to MIT, my last summer home, and the one thing I remember most is how my friends and I used to play volleyball every week. A tradition that needed no reason or explanation, it simply was. And I was both happy and wistful to watch my fellow students bump and set and spike, as I longed for something I had once enjoyed but could no longer possess.

And I realized that sometimes bliss is not meant to last, if only so you can move on to discover the even greater joys life has to offer.

Earlier this week, Ben came back to MIT to say one final goodbye to everyone in the Admissions Office. I rearranged my lunch break so I could see him – and, more importantly, give him something I’d wanted to give him since summer began. Our buddy Ben, you see, has had – for as long as I’ve known him – a slight obsession with turtles, up to the point of having a collection of them in his office. I don’t know why; perhaps I should have asked. But I simply accepted it, because it was Ben, and it was kind of adorable.

Two months ago, while I was cleaning up my room back home, I found an old Blastoise plushie I had won from a school fair years ago. And I knew instantly, without even thinking, that I had found my going-away gift for Ben. Because just as Blastoise was always the biggest and baddest turtle Pokémon, so too is Ben (in my humble, completely unbiased opinion) the biggest and baddest guy in the college communications business.

Of all the pictures I’ve taken this year, this is the one I will treasure most. 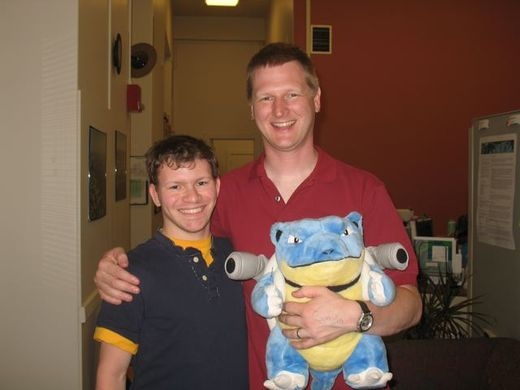 I think he liked it.

And so, the last gift given, it comes to this. The final farewell.

You see, I’d read the old entries, I’d signed the card, I’d gone to the dinner.

But in my heart, I still hadn’t said goodbye to Ben Jones – until now. Those students playing volleyball…they made me realize that Ben’s departure is…that painful as it is for those of us left behind, it’s just part of the cycle. Ben is on his way to even bigger things. And that’s what matters the most.

And in the end, I just want to say thanks to the man who showed me why I belonged at MIT – who made me realize this was the school I’d been dreaming of attending all along – who let me crash on his couch when I needed it – who has made me laugh and has made me cry – who cares more and does more than anyone else I know.

Thank you for everything, Ben.

We will all miss you.