As you may already be aware, today is Ben’s birthday! I won’t embarrass him by telling you all how old he is =), but I will tell you the story of how my friends and I unleashed a birthday explosion in his office.

So in case you didn’t know, I should probably tell you that Ben is pretty much one of the most popular guys on campus. (Not that we don’t love Matt and Nance and all the other admissions officers, of course.) Not only does he admit us to MIT, he actually really cares about us after we’re admitted, as well. His office is almost always open to us (assuming he’s around! He’s a busy guy, after all), whether it’s to chat, to get advice or an ego-boost, or even to crash on his couch. And so a few of my friends and I decided to repay Ben for all his awesomeness by throwing a mini-birthday party in his office.

The preparations began last Wednesday night. My friends Tina, Teresa, and Caroline (all freshmen, like me) baked Ben several trays of cupcakes at their dorm, Senior Haus. I was invited to the baking party, but ultimately it was decided all of us would be better off if I didn’t come. ;-)

Thursday morning (which was, incidentally, the birthday of Sam, Laura, AND Ben Jones’ Mom), we set out on our missions. Conveniently enough, my UROP is in Building E25, almost right next to Senior Haus (check for yourself here); so instead of taking a lunch break, I just hopped over to Senior Haus and helped Caroline and Tina carry the cupcakes and several LaVerde’s bags full of decorations to Ben’s office, Room 3-107. Unfortunately, we realized that Ben was probably in his office, so we decided that I would be the “distraction” and get Ben to leave 3-107, while Caroline and Tina snuck in and decorated.

Basically, I knocked on the door (you remember how Matt talked about the admissions officers being locked in the dungeon? Well, 3-107 isn’t actually a dungeon, but the room really is locked), was let in by one of the Friendly Admissions Officers, and barged into Ben’s office – interrupting the very important letter he was writing. The conversation went something like this:

So we took off down the Infinite Corridor towards the Lobby 7 coffeeshop. Unfortunately, Ben proved to be far more crafty than I had expected and actually glanced back down the Infinite towards his office…so he caught sight of Caroline and Tina as they stealthily knocked on 3-107 with their bags of decorations (and were also let in by another Friendly Admissions Officer).

That unfortunate sighting notwithstanding, I managed to delay Ben for about five more minutes (he bought me a cookie from Bosworth’s, which was delicious, although I felt bad because he bought it for me and I really didn’t plan on that happening – just goes to show you how nice Ben is) before he headed back towards 3-107. Because he’s Ben, I couldn’t really stop him, so instead I just dashed into Ben’s office to help Caroline and Tina with the decorating. The resulting hilarity is best described with picture evidence, so pardon me while I switch into photoblog-mode. (*bzzzzz* *crash* *bang*)

Okay, we’re good to go. Transform and roll out! 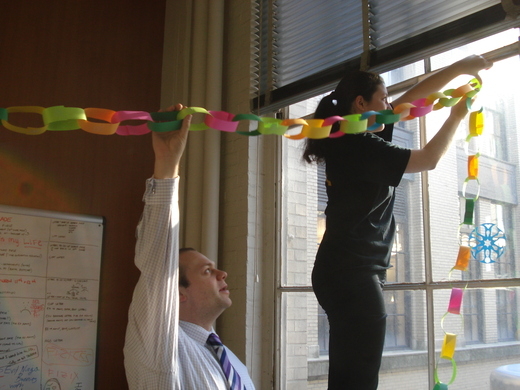 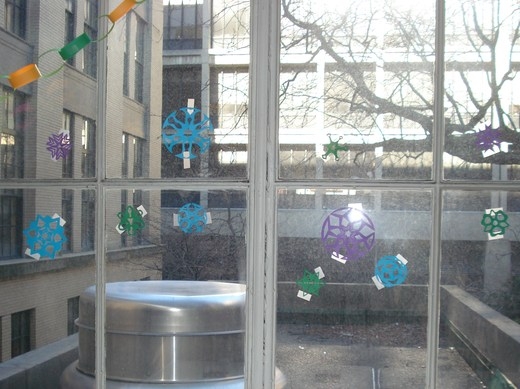 Caroline made the snowflakes.
The stainless steel contraption you see is actually part of the steam tunnel that runs beneath Ben’s office, which explains why Ben’s office is 80 degrees Fahrenheit even with the AC turned all the way up. Actually, the steam tunnel in question gets so hot that the hacking community has dubbed it “Hell.” Since Ben’s office is above the steam tunnel, and we all know Ben is God, I personally believe that this makes perfect sense. (Even though Ben, humble as always, is quick to say that God is far cooler than he could ever be. Aw.) 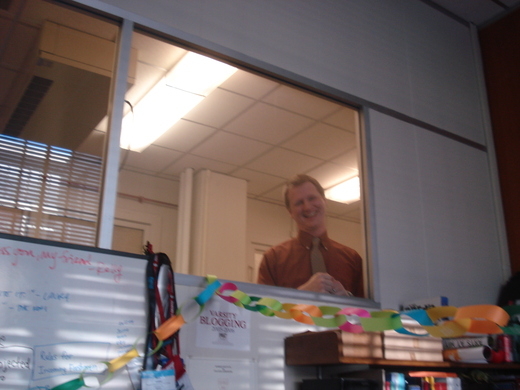 Ben spies on us through the window. Fortunately, he seems amused. 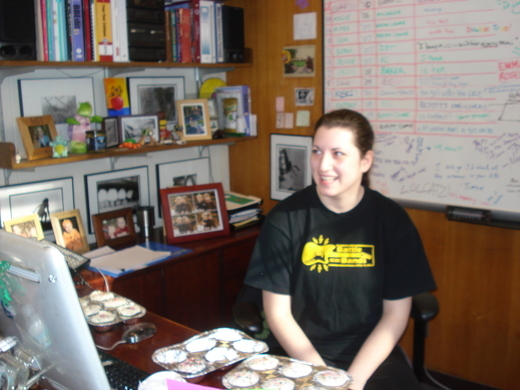 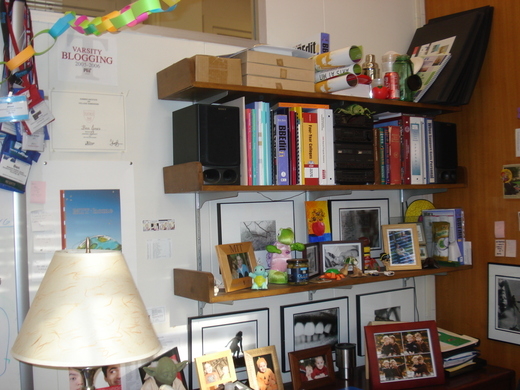 Ben’s shelves are one of the more interesting parts of his office. My favorite parts are the “Varsity Blogging” poster, his turtle collection, and the picture of one of Ben’s sons in the pumpkin costume. =) 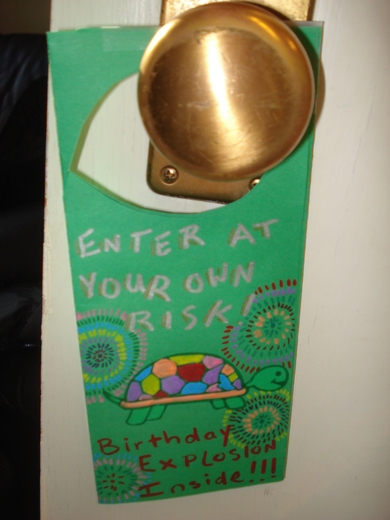 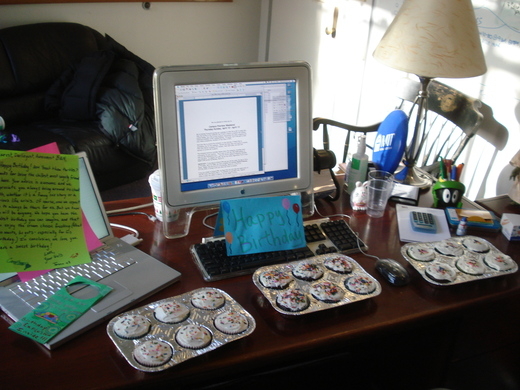 Ben’s desk is ready for the birthday boy to be let back in. The cupcakes are actually made with authentic cream cheese frosting, which is apprently Ben’s favorite. As Tina said, “What Ben wants, Ben gets!” 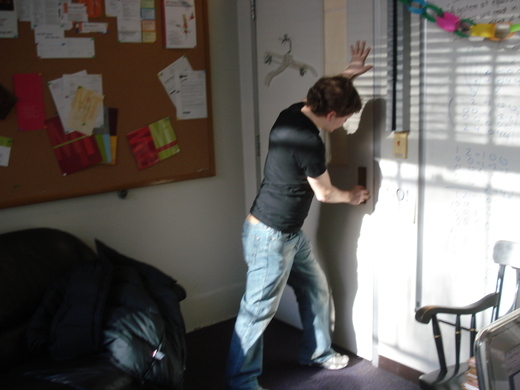 Tina: “You realize you’re locking your boss out of his office, don’t you?”
Me: “I’m gonna get fired for this…” 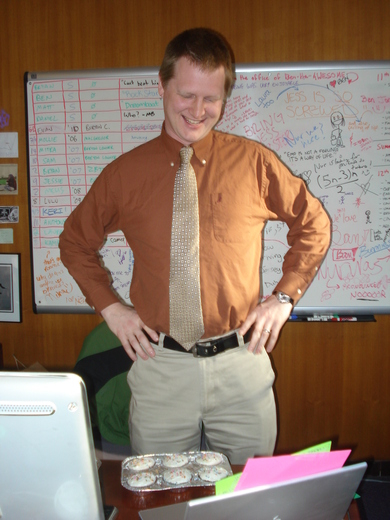 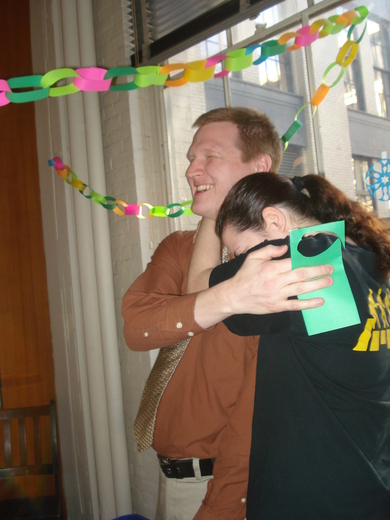 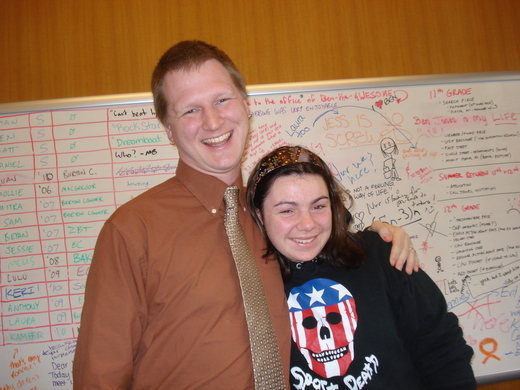 Teresa arrives and gets a hug too!
I was also hugged, but no one though to take a picture of that. Instead, we have a quote:
Ben: “Can I hug you?”
Me: “Of course you can!”
*hug*
Tina: “Paul likes hugs.”
Me: *grin and nod* 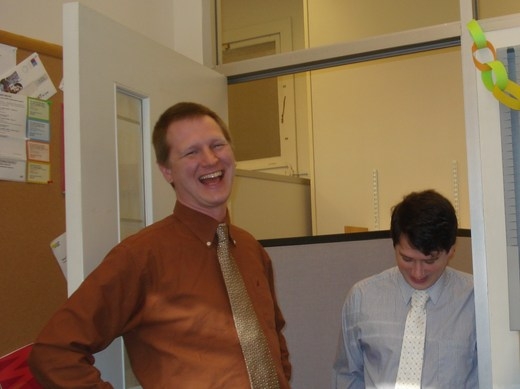 Snazzily-dressed Matt sings “Happy Birthday” to Ben.
Also, a funny story: at one point, Ben accidentally knocked one of the cupcakes to the floor. Tina suggested, “Give it to someone you don’t like!” Upon which Ben instantly called out, “Matt!” Ah, Ben, you’re such a kidder… 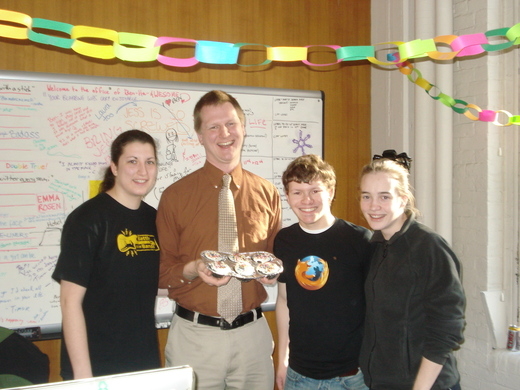 Obligatory group shot. From left to right, Tina, Ben, Me, and Caroline. 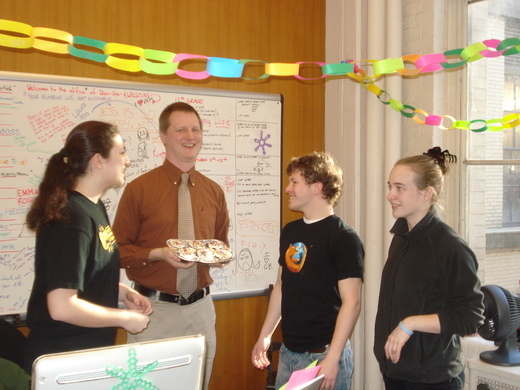 Another group shot.
To be honest, this was pretty much the highlight of my week. Sure, IAP and UROP and everything are awesome – but it’s not everyday you get to surprise one of the greatest admissions officers in the world. =)

So happy birthday, Ben! You guys should all take a minute and wish him happy birthday too. As if he weren’t popular enough already. ;-)