This is going to be ~14 entries in one - my fault for being too busy to blog much lately. If you get through it all in one sitting, you're a rockstar.

This is going to be ~14 entries in one – my fault for being too busy to blog much lately. If you get through it all in one sitting, you’re a rockstar.

Have you guys seen the hawk-cam yet?

Funny story – I was attending a seminar on podcasting a few weeks ago when they announced that the hawks had returned. There were a few hundred people in the audience, all of us mentally picturing images of cute, fuzzy baby birds. So I had to laugh out loud when the presenter hit the button and put the live hawk-cam up on the big screen – just as Daddy Hawk brought Mommy Hawk half a squirrel (and not the pretty half, let me tell you). ~300 people simultaneously commented “ew.”

So if you choose to keep the live hawk-cam open on your desktop, as many folks here do, remember that you have been warned. :-)

My favorite quote from the site:

When the [party] button is hit, all the lights shut off, the blinds close, the displays show “FEEL THE ENERGY” and a deep voice says this over the speakers with a deep bass beat in the background. Then intense music turns on along with the sound activated strobe light, laser light show, fog machine, black lights, revolving disco light, LCD visualization projector projected onto the blackout-screen, neon colored lights, computer screen Winamp visualization, oscilloscope showing the waveform of the music, and surveillance camera monitors.

Yeah, try that at home. (Actually, you can. They tell you how.)

I see that many of the ’10s have set up their MIT email addresses, judging by the number of friend requests I’ve been getting on facebook. (Big thanks to everyone who has friended me!) I’m glad you guys are getting that out of the way now – when I first discovered facebook, I lost three days of my life. Ah, facebook.

I have added some photos of my past there, for your amusement. Consider it an excuse to friend me.

The Last Couple Of Weeks

In my last entry, I promised to answer the popular question: “So now that RA selection and CPW have come and gone, do you guys get to just relax until fall travel starts up again?”

Not exactly. May –> August = the months in which we actually accomplish things with some momentum, because we’re not consumed by travel, application-reading, selection committee, and CPW planning. In the last few weeks, I’ve attempted to:

So I’m hammering away at communications-related stuff. My colleagues all have similar workloads, relevant to their specific foci (foci? focuses? What’s the plural of focus again?).

To answer the original question: we never relax! :-)

Next week will be a nice change of pace, however: we’ll all be at the Ivy Plus Conference. This is similar to the NACAC Conference in that it’s a bunch of admissions people discussing common issues in their field, however IP differs in that it’s limited to admissions folks from Brown, Columbia, Cornell, Dartmouth, Harvard, MIT, Princeton, Stanford, Penn, and Yale.

It will be my first Ivy Plus conference – I’ll give you a report when I get back.

When The Cat Is Away, The Mice Will Play

Q: What’s wrong with this picture? 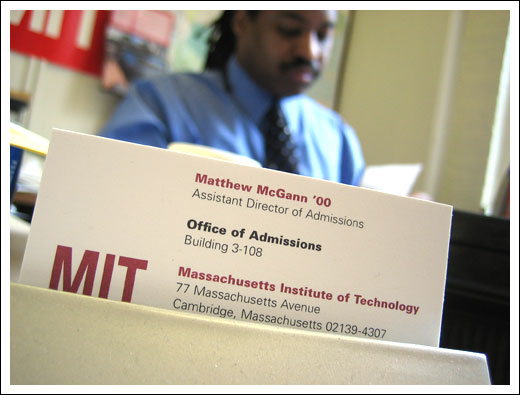 A: That’s Matt’s office, but that isn’t Matt sitting at Matt’s desk. Because Matt is far, far away.

Look how Nance has trashed the place… but that’s not half as bad as the fact that he’s answering the phone by saying “Yo yo yo, you’ve reached McGann’s Summer Home! Summer home and some are not! hahahahahaha” before slamming the phone down. 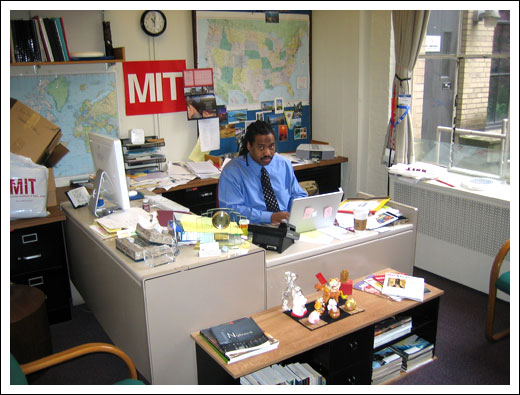 He looks guilty, no? And he’d better clean that place up before Matt gets back.

Idol | CHRIS GOT VOTED OFF??? Are you kidding me? Discuss.

LOST | Jess: MICHAEL, I know, I know. But I have this week’s tivoed so don’t discuss yet.