I did it again. I broke my right foot.

IT HURTS SO MUCH!

But goodbye crutches, I’m sticking to my good friend, the air-boot-cast.

Before you all go “WHAT DID YOU DO???” let me tell you about the last time this happened.

Go back to freshman year. I’m all on my own, at college, and I am stressed out of my mind. I am taking not one, not two, not three, not four – FIVE technical classes at MIT. I’m a crazy person.

So I tried to find ways to relieve my stress. My main way was running. Every single day, sometimes multiple times a day. It started out with small jogs to the museum of science. It turned into three-five mile bridge loops that took me along the esplanade on the northern edge of Boston along the Charles River.

It started to hurt to walk. However, it did not hurt to run.

Then there was a hurricane. Remember that big hurricane in 2012? It was that one.

My friend Kayla E. ’15 and I decided that it was a great idea to go out for a run. We did not make it very far against the wind.

When I got home, I could barely make it up the stairs I was in so much pain. I promised to go to MIT medical very soon.

And I went to MIT Medical the next day. I spent a couple of hours in the morning waiting to be seen by the doctor. The doctor finally saw me, and then sent me right away to have an X-ray.

My right foot was broken. I had a small stress fracture (that was very close to becoming a full-blown fracture if I had continued to run), and I was in a tremendous amount of pain.

So I got the boot. And I healed after a long time in the boot. I tried running again the next year, but I got shin splints and stopped. Today, I stick to biking.

Yet I still hurt my foot.

We went up to one of the MITOC cabins on a Friday night in October, and it was super dark out in the wilderness. We were all sitting around a campfire, and I got SUPER excited to see my friend Barbie D. ’17. Like, super excited. I felt like one of those people who squeeled when they were happy, because I was squeeling when I was happy.

This is how our greeting should have gone:

And I shook it off immediately. I told everyone that I was okay, and I tried to get up. I couldn’t get up at first, but forced myself to despite the agonizing pain.

I made it to the cabin, and I went to sleep. However, a pulsing pain in both of my feet kept me up throughout the night.

When it was about time to get up, I crawled to the edge of the room, and somehow made it to where the people were. I crawled around until I got to medicine, and took a ton of ibuprofen and acetominophen. I bothered my friend Sarah W. ’16 for help wrapping up my feet, and we determined that hiking probably wasn’t a good idea since I could barely walk.

So I waited for the pain-killers to set in, and eventually I could sort of walk. My friend Kayla E. ’15 and I got some coffee, checked out some used climbing/hiking gear, and headed home. It was a short trip, but a fun one. When we got home, Kayla dropped me off at MIT Medical.

It was a terrible experience. I don’t want to go into details. Basically, I did not get an X-ray. I got two ankle braces and some crutches and was told to stay in bed and take advil. They didn’t even ask me if I had hit my head, or if I had hurt anything else when I had fallen :( 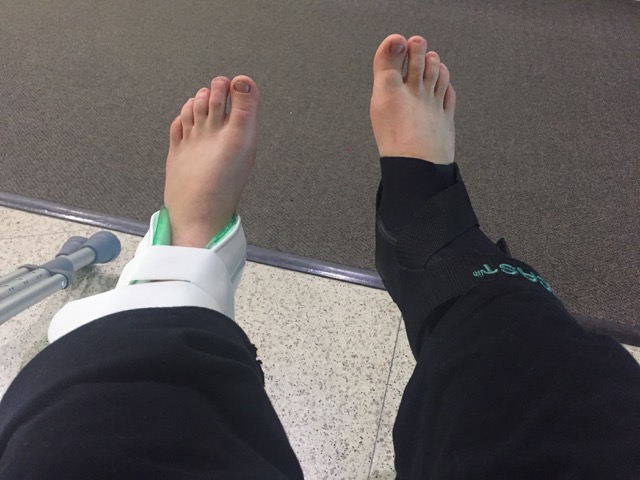 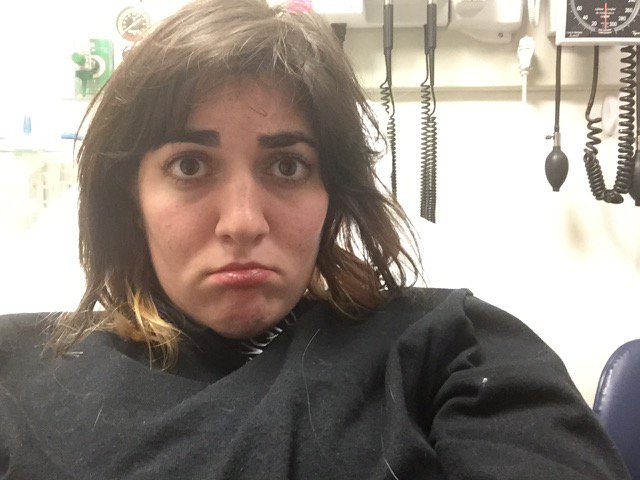 So I went on with my life. Sort of. It was super depressing. I could not walk, so my boyfriend made me soup and I spent a lot of time with him and my cat. I took a lot of pictures of Rory. 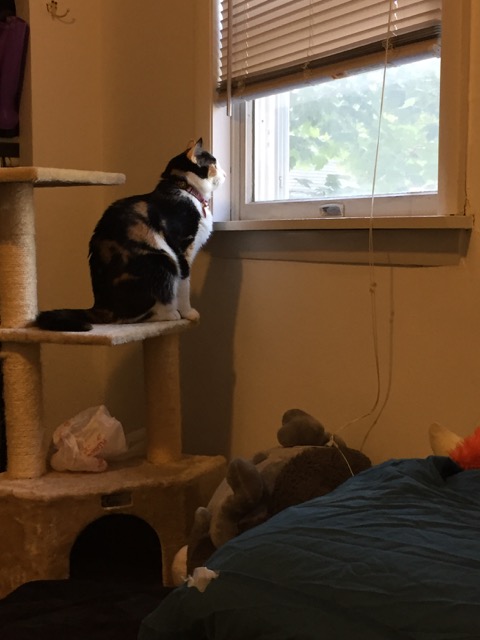 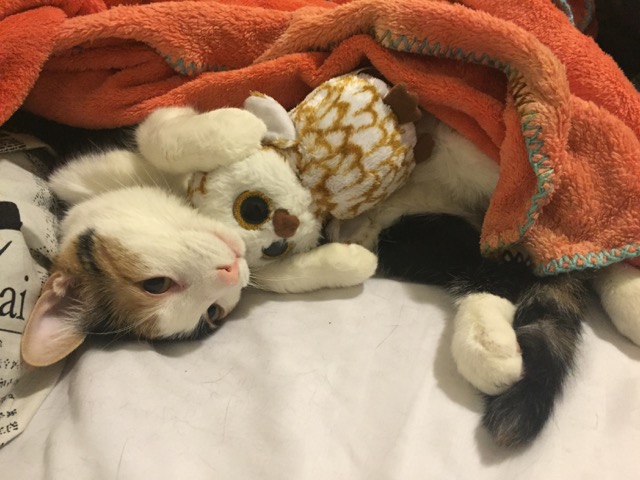 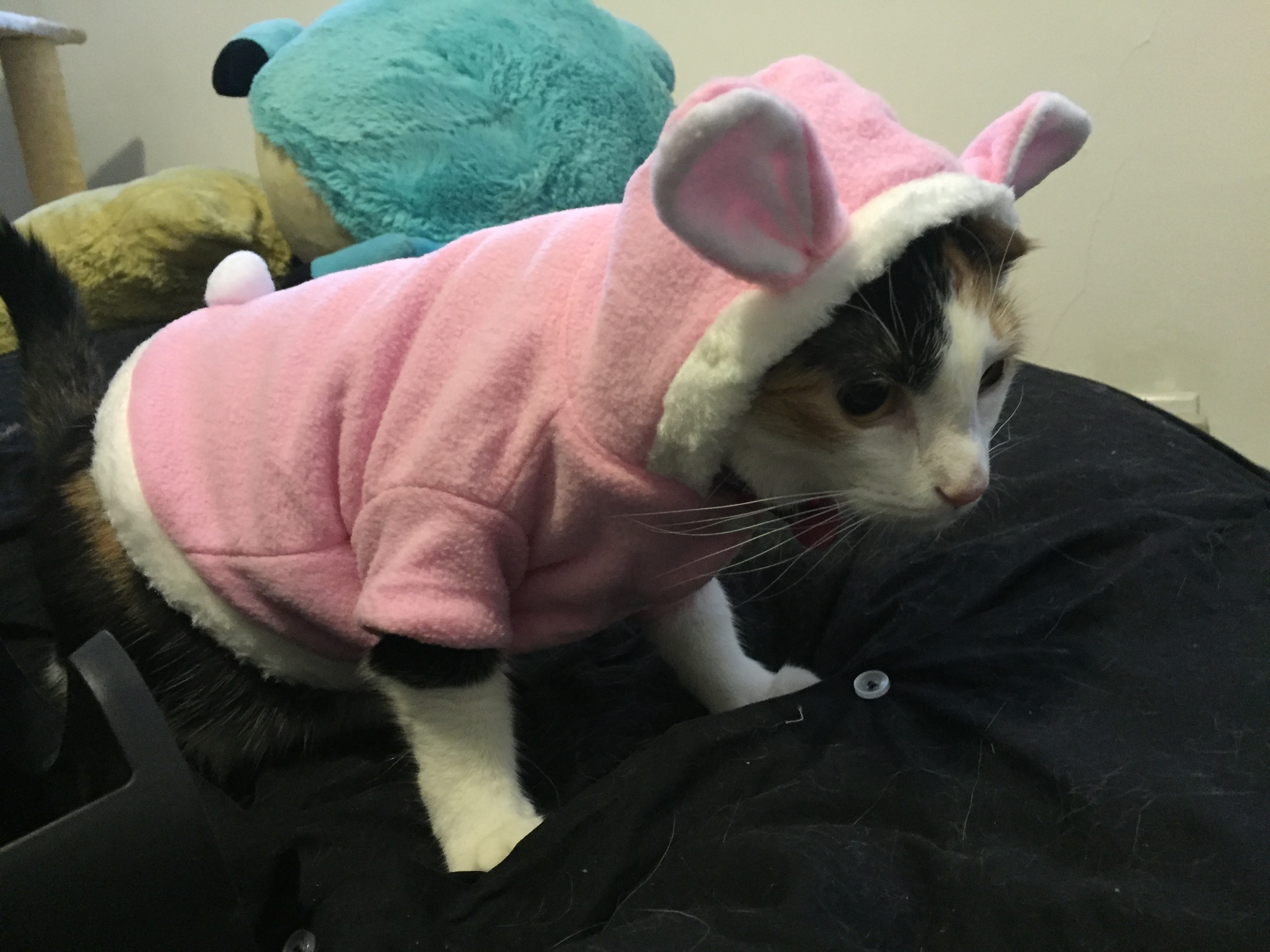 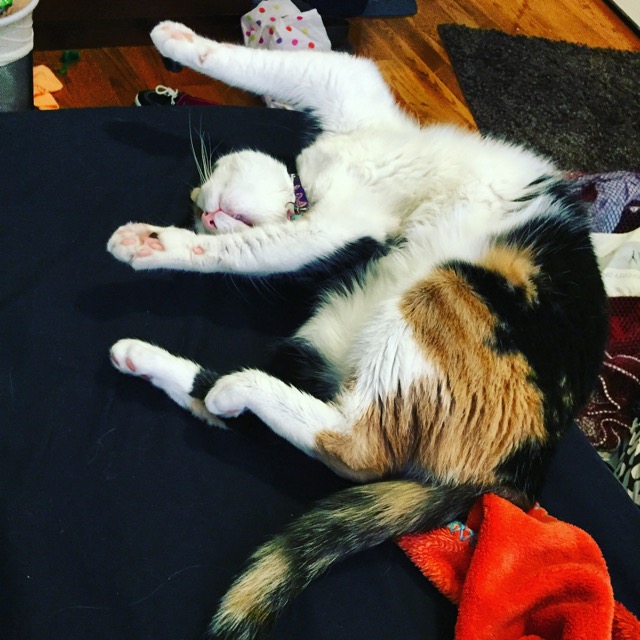 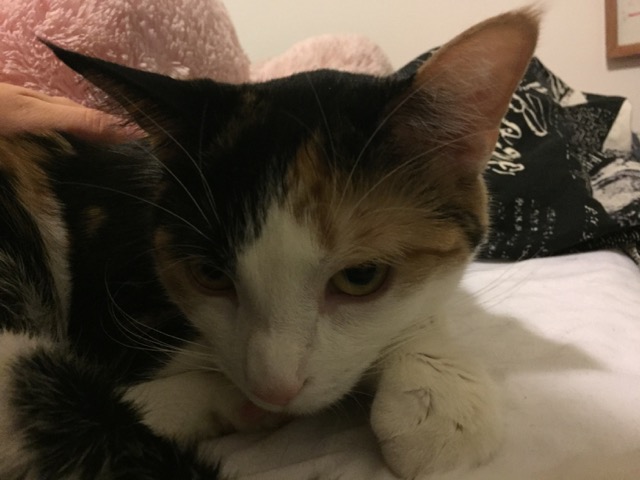 Rory was my savior, a reason to keep going while stuck in bed, unable to move around. Eventually, my left foot healed, so I was able to (kind of) get around on crutches. I was able to go to work and some classes, which made things a little easier.

But the pain in my right foot kept getting worse. I went to MIT medical again, and got in an argument with the nurse that ended in me crying and her leaving me in the room to deal with my sadness on my own.

I called my mommy, who was already scheduled to come visit me, and she agreed to bring me my air boot cast thingy from freshman year. She brought it, and suddenly I could walk around! The boot is perfect for allowing mobility without allowing the foot to get further injured.

Yet, the pain kept getting worse. I was determined to get an X-ray. So I went back to MIT Medical Urgent Care for a third time.

(You may be asking at this point – why not go to a different doctor? Why not go to the hospital? Well, I tried those things. Or at least considered them. I could not get an appointment with a physician at MIT Medical, and a visit to the hospital would cost a minimum of $50 per visit, let alone the X-ray cost. These were all free for students and covered by my insurance at MIT Medical, so I was left with minimal options money-wise.)

The third time was finally helpful. I got the doctor that helped me my freshman year when I had broken my foot, and I told her about how helpful she had been that time. She recommended that I use the air cast boot, and helped me fill it up with air so it worked even better. She also gave me very useful advice for pain management, and helped me with a referral to an orthopedist. And I finally was able to get X-rays!

The X-ray did not show any torn ligaments or broken bones, but the orthopedist told me that I had strained and torn some tendons in my right foot. Four more weeks in the aircast boot, plus rest, elevation, and ice. Plus medicine for the pain, and I’ll be able to sleep at night pain-free. After the aircast comes off, I’ll need physical therapy.

I’ve met with student disabilities services to talk about how I can get around and get caught up in my classes while injured, and Meghan (from the services) was super super super helpful. I now have a great system of friends who drive, MIT shuttles, and the occasional Lyft or Uber driver. I still feel behind, but I’ve been able to catch up on work and stay on top of things.

Being injured sucks. Being sick sucks.

And the administration is right there to help us, no matter how many times we tell ourselves or others tell us that “they’re out to get us.” There’s Student Support Services, Student Disabilities Services, our professors, Mental Health & Counseling, and more. And they’re just as hosed as we are right now, just in other ways. But I’ve been helped so many times in these past few weeks, they truly have been saviors.

Stay tuned for more writing on my semesterly struggles, my awesome job, senioritis, and living off-campus. And my cat, Rory.

Also, I got a pet hamster. Her name is Princess Leia :) 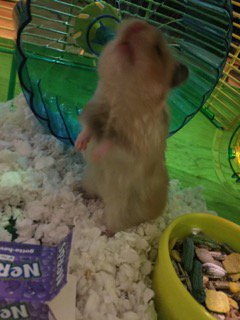