This Thanksgiving, I'm thankful for my ridiculous, hilarious, amazing floor.

I’ve mentioned a couple times that, like East Campus, Burton-Conner is first divided into Burton and Conner side, and then from there, into floors – from Burton 1 to Burton 5, and from Conner 2 to Conner 5 (Conner 1 includes the housemasters’ suite). As such, each floor has a pretty defined culture, and while there is clearly no objective way for one to claim one floor is “better” than another – as they’re all so different – I feel confident in declaring that Burton 1 is the best floor in Burton-Conner. Maybe even in all the dorms at MIT.

I mean, there are some floors. And then there’s Burton 1. Burton 1 is pretty much like the Chuck Norris of all floors. If we were on Heroes, we’d be Sylar without all the evilness and serial killer tendencies. Now that I’ve established that, we can all go home.

I say this lightly, of course – there is no substitute to visiting MIT and checking out the different dorms as a prefrosh, or as a freshman, and trying out what works for you. Different places suit different people (which is true not only of living groups but also of universities), so it’s really fantastic that at MIT, you get to make the choice not only where you live but who you live with. Having a really awesome living group can make all the difference between having an average college experience and an amazing one, and that’s why we encourage freshmen so enthusiastically to look around.

But my floor works for me. We’re a cohesive unit, not just a bunch of people who live together, and I love having a place so filled with quirky, loving individuals to belong to. They’re the kind of awesome people who’ll be up with you until 4 in the morning tearing through your 14.01 psets – or if you don’t have an 14.01 pset, you’ll wake up to at least ten emails between people competing to see who stayed up the longest (though whoever wins is pretty much the biggest loser); they’re the kind of family who’ll be screaming for you in the stands of your final NCAA volleyball game, with your name and number painted on their chests. They’ll fill your entire room with balloons and herd everyone into the room to wait for you to come home, and then they’ll throw an impromptu dance party afterwards because not only is it your birthday, but you also just took your 18.01A final and totally deserve to let off a little steam. And they’ll definitely be down for eating $30 worth of Chinese food and watching three hours of Grey’s Anatomy after you’ve had the worst two exams of your life and are absolutely exhausted from four straight days of studying (which included missing the floor Halloween party). It’s a fantastic place to come home to at the end of the day.

We’re so cool that we were not only one of the most popular floors in Burton-Conner floor rush (which is similar to dorm rush, in which freshmen traverse the floors to see where they’d like to live and then rank their favorites), but also in IFAF (Inter-Floor Activity Fund) proposals, where each floor proposes an activity (i.e. ice skating, laser tag, mini golf) to attend with another floor, to promote interfloor bonding. Basically, we’re freakin’ suite. (“Freakin’ suite” being the tagline of the Burton-Conner t-shirt, featuring Peter Griffin from Family Guy, which is a pun on the fact that Burton-Conner has suites rather than just dorms in a hall, and also I totally just ruined the joke by explaining it.)

Anyway, our first and biggest IFAF of the year was a weekend in Maine with the Burton 3rd Bombers, who were so much fun to party with, and almost equally as cool :) We rented a house and danced, caught up on sleep, took really good-looking pictures, and even.. studied? 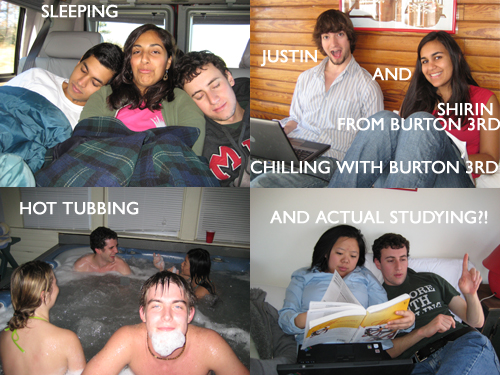 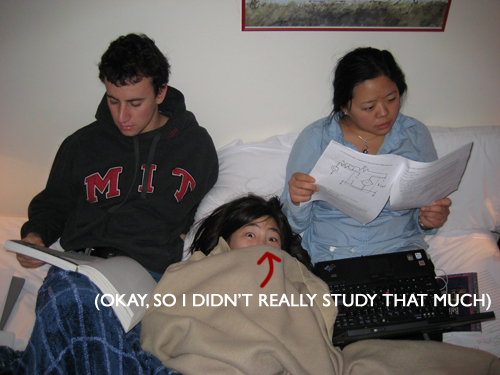 Really, there’s no use in me talking about how great these people are – you’d just have to meet them. The best I can do is try to introduce them to you: 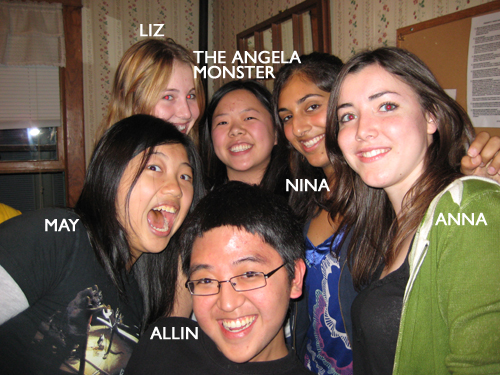 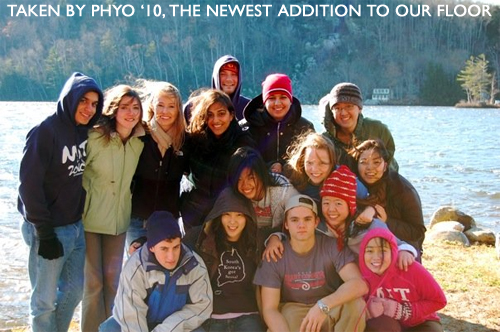 Partying with Burton 3rd was crazy fun, but we definitely have a lot of intra-floor love, too. Since most of us are going our separate ways this Thursday, our awesome GRT (Graduate Resident Tutor, similar to an RA) Vered (aka V) hosted a Thanksgiving potluck last night at her apartment, at which we all said what we were thankful for (i.e. Dima: “I’m thankful for the Burton 1 freshmen, without whom I would not have passed 18.03. …at least, I think I’m passing 18.03..”) 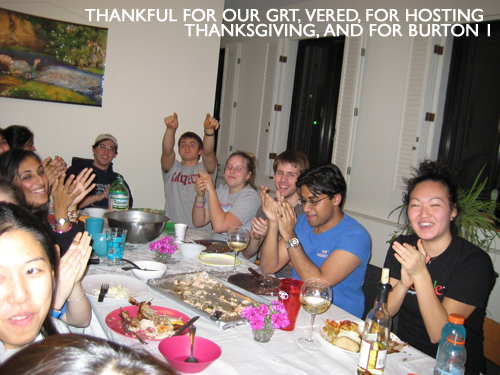 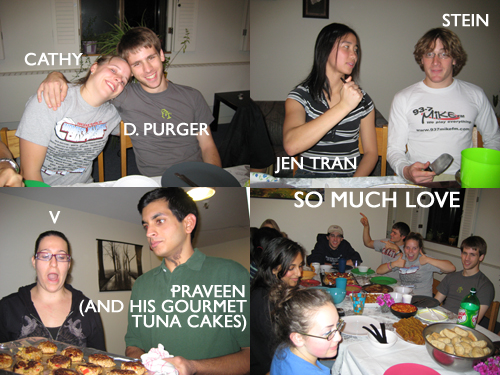 Another point to how we’re the best floor ever – we’re not only good-looking, but we’re also good cooks. V cooked the massive turkey, Steph and Melinda brought two kinds of stuffing, Lauren made homemade orange-cranberry sauce, D. Temp brought TEN pounds of mashed potatoes (which included 4 whole sticks of butter, which we all consumed and promptly died of coronary heart disease), Praveen made tuna cakes, Allin brought his corn souffle courtesy of his mom’s recipe, Ravi and Jamie made some weird cow pie dish* that was something in between tortillas that I didn’t eat because I’m (thankfully) a vegetarian.. basically, there was a lot of food and I’m kind of still in a food coma, so I’m not going to write what everyone brought because I don’t want to make you jealous. But I made two pumpkin pies and the best apple torte of your life. Don’t be jealous, or anything. 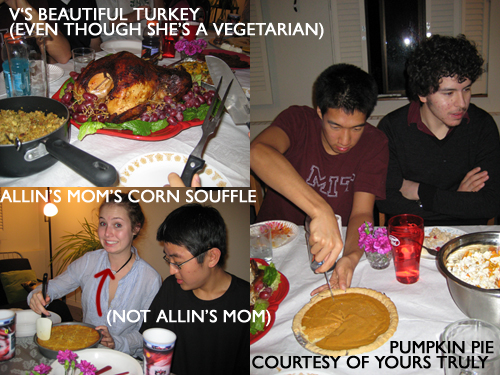 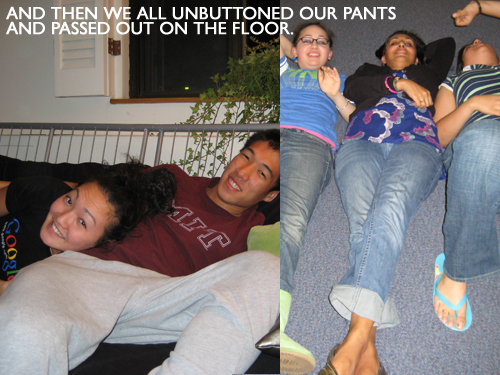 In conclusion – your living group is REALLY important to your MIT experience. Don’t stress if you don’t feel like you’ve chosen the right one – it’s fairly easy to change, since there’s always the readjustment lottery (two of the girls in those pictures don’t even live here, they just got adopted because they like us. Because we’re so freakin’ cool.)

And with those mouthwatering pictures in mind – happy Thanksgiving!

* [ETA 11:01 PM] So my description of Ravi and Jamie’s cow pie was a little inaccurate. Here’s Ravi Gupta’s eloquent correction as to how to properly depict their dish:

“And although the turkey is usually considered the centerpiece of a Thanksgiving dinner, those with a keener sense of taste and life in general would have been distracted from something else. A something else that sat silently at a corner of the table, not distrubed by the lack of attention attributed by tradition but quietly confident that it would be soon devoured because of what it was and how it was made. It was a paradise statue sandwiched between two tortillas and surrounded by islands of sour cream and refried beans and silhouted by shot glasses full of Tobasco sauce, soy sauce, A1 steak sauce, and goya and pepper. The center of the top tortilla was glazed with steak sauce but in a way that spelled out the initials of its creators. Because these creators, adventurous and eager, sculpted a testament to deliciousness. Twelve eggs gave their lives, a shot of tequilla leaped into the unknown, two tomatoes danced with a pile of chopped onions while garlic and hints of ginger serenaded the brute force of a hamburger patty and bacon all just to testify to what was, should always be, and can be again in just under an hour of preparation time.” 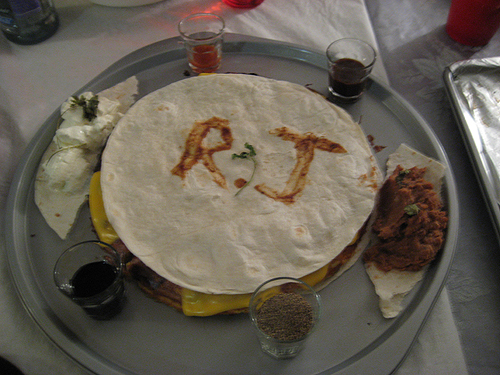